Right of Reply: SARS is not falling apart, saying so is a misrepresentation of the facts 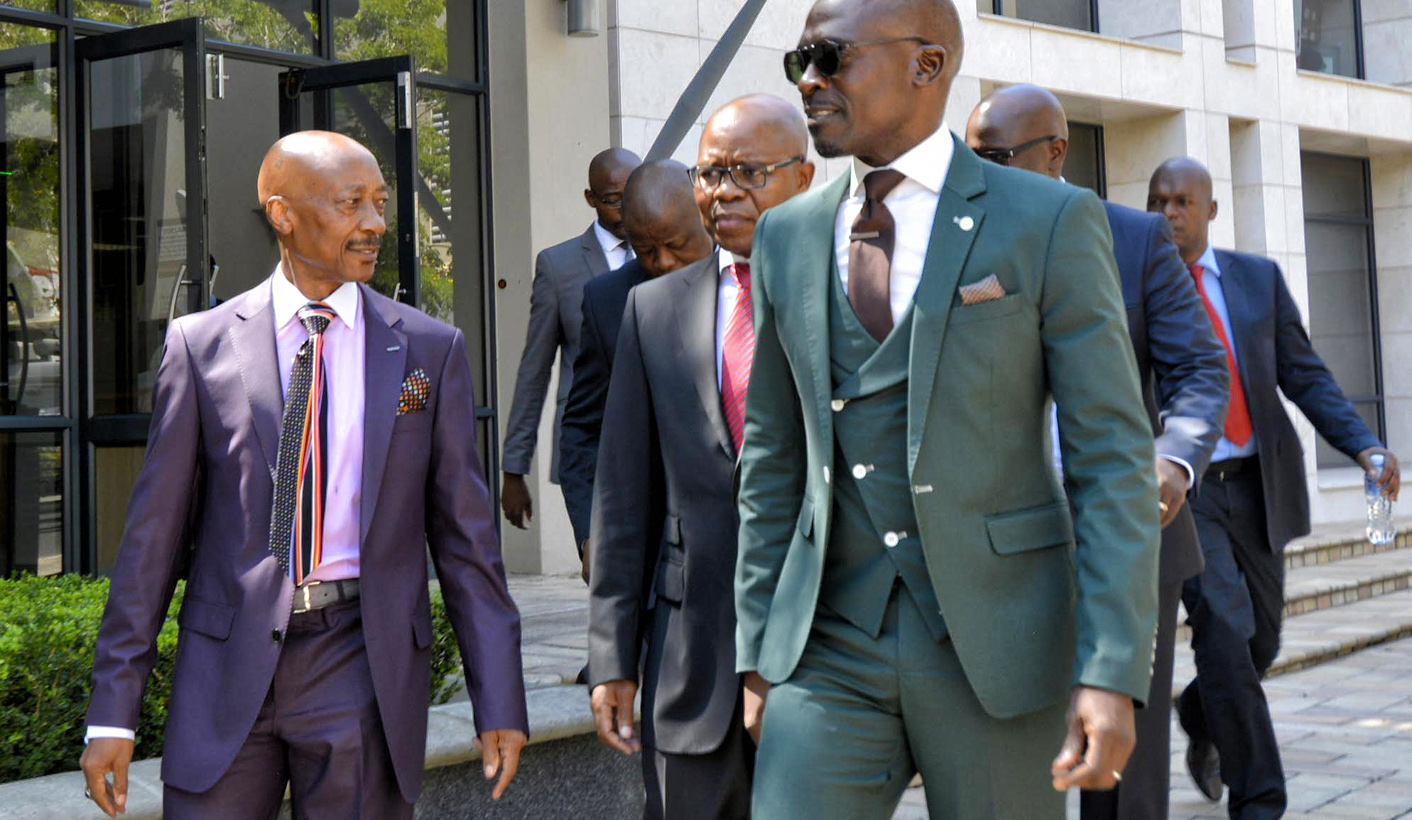 SARS finds it necessary to address the unsubstantiated tone that “things are falling” and the alleged IT systemic glitch that resulted in disappearance of documents. By SARS spokesperson SANDILE MEMELA.

(Note: Daily Maverick contacted SARS for a right to reply before writing but had heard nothing from them when our story appeared – Ed)

SARS finds it necessary to address the unsubstantiated tone that “things are falling” and the alleged IT systemic glitch that resulted in disappearance of documents.

The premise of the piece is hinged on the predictable narrative that the organisation has a challenge to fulfil its mandate since the appointment of the Commissioner Tom Moyane and the restructuring process that was implemented in 2015.

This is a blatant misrepresentation of the facts.

It is simply not true that Commissioner Moyane is allegedly “breaking down” the organisation, dragging his feet on the suspension of Jonas Makwakwa, among other unsubstantiated allegations.

There is no basis for this negatively slanted and misleading analysis. ??It will be appreciated if analysis is balanced, fair and accurate. The article simply rakes up the past to muddy the clear achievements of more than 14,500 men and women who have made SARS the success story that it is.

Systemic IT glitch: The headline and angle of the article alleges that taxpayer submissions are disappearing from SARS computers, glitches related to the ITR12, efiling, retirement annuity fund contributions, medical deductions, and employer reconciliation submissions.

Unfortunately, this unsubstantiated narrative perpetuates incorrect facts about these matters which may alarm taxpayers and the general public.

No documents disappeared: SARS wishes to assert that no documents have disappeared. This is blatant misinformation and distortion of the fact.

Taxpayers affected by this in the first week of tax season would have seen a different name to their Medical Scheme and instead see the name of the medical scheme administrator.

SARS corrected this in the same week. Taxpayers were not required to re-complete their tax returns. It is important to note that this is an information field and has no bearing on the tax calculation.

SARS detected that software on the [email protected]™ Employer application designed for employers was not sending a specific information code (code 4582) or its value when uploading the employer’s submission to SARS.

A communication was sent to the affected employers to resubmit their reconciliation and related certificates. This was a simple process that required the resubmit button to be selected to re-send the stored data file.

Once the employers have re-submitted the reconciliation, the updated certificates would be available for the employees to submit their tax return.

No errors on ITR12: SARS is deeply concerned to note that the Daily Maverick indicates that SARS announced errors on the ITR12 return with respect to Retirement Annuity Fund Contributions. This is not correct.

There were two aspects in respect of retirement contributions:

As part of the filing process, certain taxpayers carry forwards of retirement annuity contributions are being limited and/ or being subject to audit as it has been found that many taxpayers have an erroneous carry forward amount from earlier years. Where possible SARS has adjusted the process to limit the impact on taxpayers.

Historic Milestone: It is now history that SARS collected R1.144-trillion that has seen it exceed the revised estimate set by the Finance Minister by over R300,000. It is for the second year in a row that SARS broke the trillion rand mark.

Bleak global economy: It is clear to all with eyes to see that revenue realisation was made even more difficult given significantly declining consumption levels constrained by an interest hike cycle and deteriorating business confidence. The declining currency exchange rate provided real challenges to foreign business exposure.

As noted in the 2017 National Budget Speech, the projected rate of economic growth is not sufficient to reduce unemployment or impact significantly on poverty and inequality.

Gupta Refund: The continued insinuations about alleged interference by Moyane to facilitate a VAT refund to Oakbay puts the organisation in a precarious position, as SARS is not allowed in terms of Chapter 6 of the Tax Administration Act (TAA), 2011 to discuss or divulge information on individual taxpayers’ tax affairs.

SARS wishes to reiterate that assessments and refunds are dealt with through risk processes that utilises tightly governed rules and processes, to ensure impartiality in SARS dealings with taxpayers.

Ombuds Probe: It is a matter of public record that SARS received the preliminary report from the Office of the Ombudsman, Judge Ngoepe. SARS is engaging the Ombud in this regard.

Revenue shortfall: SARS finds it regrettable that your analysis continues to promote the perception that the revenue gap of R30-billion is attributable to the performance of the SARS administration despite contrary facts provided by SARS in its statement of the 24 February 2017.

Once again, SARS would like to reiterate that the significant downward revision from the Printed Estimate of R1175bn by R30bn for the 2016/17 Financial Year according to the 2017 Budget is attributable to:

a. Customs Duties being down by R6.5-billion, as a result of contraction in real terms in imports.

b. VAT, similarly being dragged down by Import VAT collections to an underperformance by R11.3-billion.

c. PIT, for long being the anchor of Revenue Collections, underperforming by R15.2-billion. The growth of PIT, year to date, has declined from levels exceeding 12% to about 9% as a result of lower wage settlements, containment of bonus payments and job shedding.

Downward Revision: All of the above are attributable to economic factors which were analysed and taken into consideration when formulating the budget proposals. This process is not decided upon by SARS alone, but involves National Treasury, the South Reserve Bank and SARS as part of the Revenue Analysis Working Group (RAWC).

Based on a consensus seeking process the RAWC recommends a Revenue Estimate to the Minister of Finance. Throughout the years this process has ensured integrity and transparency to the determination of Revenue Estimates.

2017/18 Revenue Target: With this in mind, SARS as a collective is focused and single-minded about meeting our revenue collection target of R1.265 trillion for this year. As the revenue collection service, SARS fully appreciates the responsibility entrusted to us by the constitution and aware of the implications on of meeting/not meeting the target.

Skills Loss: It is not true that the organisation is experiencing a brain drain that has undermined its capacity to carry out its mandate. In fact, at the media conference the Commissioner made it clear that the loss of skills is not true. Since the beginning of April 2017, 279 employees left the organisation through resignation, retirement etc while we have recruited 321 new employees.

Commissioner Appointment: It is a fact that the SARS Commissioner is appointed by the President who exercises his prerogative. Neither SARS nor the Commissioner has any say in the appointment.

The SARS Commissioner is a public servant who is committed to heed calls for national duty and will always be non-partisan and only committed to our revenue collection mandate.

It is an indisputable fact that the economy is a significant factor in the revised revenue estimated.

Makwakwa Investigation: On the matter of Chief Officer: Business & Individual Tax, Mr Jonas Makwakwa, SARS is not in a position to disclose more than what has been publicly disclosed to date.

SARS has received a final report from Hogan Lovells. The recommendations are still under consideration.

Kgabo Hlahla: SARS wishes to reiterate that Mr Hlahla is not the Acting Chief Officer IT as reported. He is the Group Executive: Strategy & Architecture, Digital Info & Technology.

Also, SARS can confirm its preliminary investigation into the matter of his dismissal from his previous job in Limpopo could not discover anything untoward or inappropriate.

SARS has made it clear that the appointment of Mr Hlahla was done properly and as such, there was no reason to act against Mr Hlahla in any way.

It is important to note that as SARS, we are dictated to by the laws of this country to respect employees’ rights which includes Mr Hlahla’s.

?Biased reportage: It will be highly appreciated that the Daily Maverick’s opinionistas uphold the highest standards of factual, fair and accurate reportage.

Furthermore, SARS is deeply concerned about apparent bias, irresponsible and mischievous attitude to cast aspersions on the character of the organisation to perpetuate a negative narrative of an organisation that is falling apart.

SARS finds it regrettable that some analysis continues to promote the perception that an outstanding revenue collection agency is falling apart.

SARS Resilience: With this in mind, SARS wishes to assert that the organisation remains resolute, focused and single-minded about meeting our revenue collection target for South Africa.

SARS fully appreciates the responsibility entrusted to us by the Constitution and is aware of the implications of meeting/not meeting the target. DM