What’s mine is mine: Lonmin and the secret claim on Marikana land 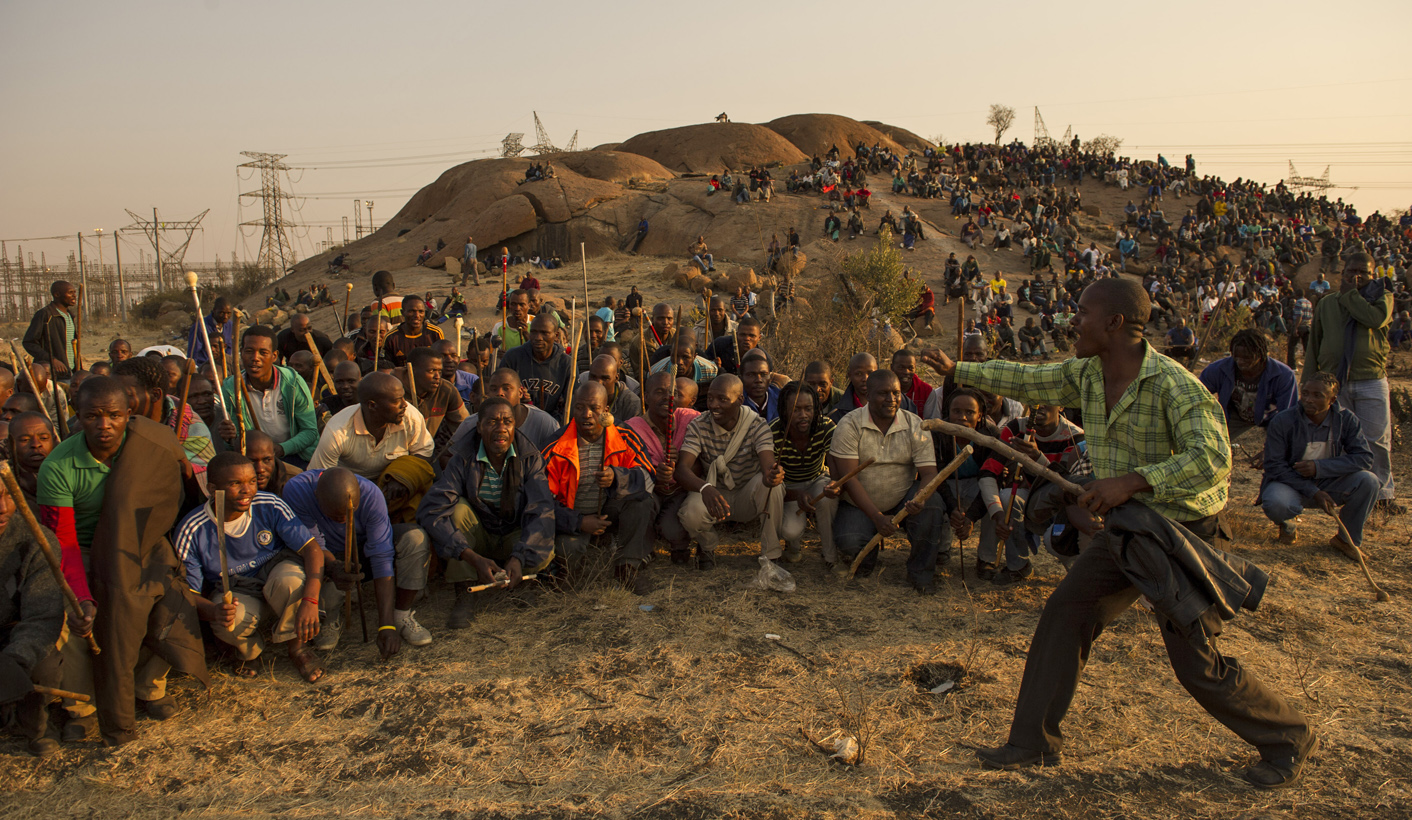 Wonderkop. Wonder hill. Is it any wonder that this farm, which houses the koppie where 34 miners were killed in the greatest state-sanctioned massacre of South Africans since Sharpeville, is subject to a land claim? Yup, the claim, which has been in effect since 1997, received a shot of legal adrenalin on 5 July 2017. Will the whole stinking edifice that surrounds Lonmin and the Bapo Ba Mogale traditional authority now come tumbling down, or will our government step in to save it? By KEVIN BLOOM.

“The changing economy was ignored, plans for the change ignored; and only means to destroy revolt were considered, while the causes of revolt went on.” – John Steinbeck

These words, written by John Steinbeck in the 1930s, are about the land. They come at the end of a passage in The Grapes of Wrath in which the narrator informs us about the “great owners” who have “eyes to read history” and should therefore know that the accumulation of property in too few hands is always and everywhere untenable. This fact, writes Steinbeck, has a companion fact: “When a majority of the people are hungry and cold they will take by force what they need.” And there is also, he tells us, a third fact, which is that “repression works only to strengthen and knit the repressed”.

Welcome back, then, to the farm called Wonderkop in North West, where the hungry and the cold took up arms in the winter of 2012. Better known as Marikana mine, a piece of platinum-rich earth that we all thought was “owned” by Lonmin PLC; this was the farm where 34 miners were shot dead on 16 August 2012, by a state that we all thought was democratic.

“The great owners ignored the three cries of history,” continued Steinbeck. And so, as it turns out, with a hat-tip to the American writer-prophet, we may have been as wrong about the legitimacy of Lonmin’s claim to the land as we have been about the motives of the current South African government.

On 5 July 2017, Daily Maverick has learnt, a document was lodged in the Randburg Land Claims Court that pits the “Wonderkop community” and the “Chabaku family” against the minister of land reform and rural development, the traditional authority of the Bapo Ba Mogale community, the office of the chief land claims commissioner, and Western Platinum Limited (a subsidiary of Lonmin). The document is an “amended statement of claim” to the original land claim lodged by David Ramohanoe, the chairperson of the Wonderkop land claims committee, in December 1997.

The Wonderkop community was formed in the 1920s, the latest papers state, after the Bapo Ba Mogale “tribe” was dispossessed of certain farms. In exchange for these farms, the Bapo were given the farms Turffontein, the remainder of Modderspruit, and “the right to purchase the remaining extent of Wonderkop 429… for the sum of £4,500.” Chief Filius Mogale and his traditional council did not have the money, so the descendants of Wonderkop’s original inhabitants formed a collective to raise the funds.

“The payments made by these families were from as little as 1 to 6 Pounds,” the court papers assert, “and there was a list which included the names of the members of the community who contributed and the dates of the contributions.”

This list, dated 1924, is annexed to the court papers and marked as “WC3”. Chief Mogale of the Bapo, although he wasn’t asked to authorise membership of the claimant community, facilitated the purchase by acceding to the terms on 8 August 1924. Full settlement occurred on 2 December 1926, and a deed of grant was prepared and effected on 27 September 1927. Thereafter, the Natives Land Act of 1913 prevented the Wonderkop community from registering the farm in its own name – Chief Mogale, as the traditional leader of a “recognised tribal entity”, had to hold it in trust for them. Today the Wonderkop farm, “portion 1” of which is being mined by Lonmin, is held in trust by the minister of land reform and rural development for the wider Bapo Ba Mogale community. The descendants of the original claimants have neither been recognised as the land’s true owners, nor have they been paid a cent in royalties.

“We think we’re going to be successful,” said David Ramohanoe, the great-grandson of one of the original purchasers, when Daily Maverick spoke to him in late July. As the chairperson of the Wonderkop land claims committee since its inception in 1997, Ramohanoe has seen the matter pass through two courts already. “We won the first round in the Randburg Land Claims Court,” he said, “and we won in the Supreme Court of Appeal. We have given the Bapo Ba Mogale traditional authority a second chance to file an answering affidavit. They haven’t done so. We are uncontested so far. Lonmin have also said they are not going to contest, they are going to wait for the decision of the court.”

In this terse statement, which Ramohanoe delivered in unembellished language, were universes of allusion. For starters, there was the fact that the courts had already recognised the claim of the community as valid — the matter had only been referred back to Randburg on a technicality. Then there was the issue of the Bapo Ba Mogale traditional authority. As the Daily Maverick has reported at some length (see here and here), the authority, which represents the interests of some 40,000 mostly unemployed members of the Bapo, has been hijacked by a cabal that extends all the way from the local police to the office of the provincial premier — the cabal has not only robbed the community of an estimated R800-million in platinum revenue, it has also sanctioned attacks on community activists by panga-wielding thugs. Finally, there is the issue of Lonmin’s involvement in the aforementioned, which has likewise been covered by Daily Maverick in detail (see here).

So what are Lonmin and the traditional authority playing at? Do they think it won’t matter if they lose the proverbial farm?

“Wonderkop is the jewel in the crown that is the Bapo Ba Mogale community,” explained Hugh Eiser, the attorney who represented the traditional authority until early 2014 (and the man who is still listed as the authority’s attorney of record). “It represents around 70 percent of the assets that Lonmin are currently mining.”

An email sent by Eiser on 5 July 2017 to Lonmin’s branch secretary Peter McElligott gives a sense of the potential scale of the mining company’s problem. Eiser begins by reminding McElligott that the Wonderkop “splinter group” almost succeeded in its land claim in 2007; what stopped them was an urgent interdict, brought by Eiser himself, that held until the claim could be properly finalised.

“The case dragged on and on to mid 2014, when I ceased to represent the community,” Eiser writes. “Western Platinum was a party to that application, being the fifth respondent.”

Lonmin’s group head of communications Wendy Tlou, in an emailed response to Daily Maverick’s questions, confirmed that McElligott was aware of the claim from as far back as 2011. Why is this detail important? Because in July 2014, just after Eiser stopped working for the traditional authority, Lonmin concluded its R540-million royalty-for-equity swap with the Bapo Ba Mogale. The transaction, it was alleged in an affidavit submitted by community activists in June 2015, was finalised without the consultation required under living customary law, the Mineral Petroleum Resources Development Act or the Interim Protection of Informal Land Rights Act. Now, it seems, there’s an even better reason for the deal to fall through – Lonmin may have been bargaining with land they didn’t own.

“You can’t do a deal on property that is subject to a land claim,” Eiser informed Daily Maverick, before laying out what he thought could be the consequences. “If the royalty-for-shares swap unravels it could bring Lonmin down. They won’t be BEE compliant any more. Secondly, it undermines their whole shareholding structure.”

For her part, Tlou told Daily Maverick that Lonmin does not — “not at all” were her exact words — consider the land claim a threat to the deal. But the real question is, will the South African government ever allow the mining company to fold?

On 26 July 2017, a press release was put out by the department of mineral resources announcing that Minister Mosebenzi Zwane had approved Lonmin’s application to acquire Anglo Platinum’s 42.5% stake in Pandora. The company, the press release went on, was due to be placed under care and maintenance, placing 3,000 jobs at risk.

“The granting of the consent is… subject to Lonmin presenting a plan to the department within five days,” said Zwane, “on how it will address its BBBEE compliance, as we cannot afford a situation where transformation is compromised.”

There’s no need to point out the obvious. So maybe we’ll just sign off with the last quote from Steinbeck (from the passage noted above), which explains how scenarios like this tend to end.

“The land fell into fewer hands, the number of the dispossessed increased, and every effort of the great owners was directed at repression. The money was spent for arms, for gas to protect the great holdings, and spies were sent to catch the murmuring of revolt so that it might be stamped out.” DM

Read more in the series:

What’s mine is mine: How the Bapo Ba Mogale got robbed of R800 million, in Daily Maverick

What’s mine is mine: Lonmin and the dangerous art of intimidation, in Daily Maverick.

What’s mine is mine: How warlordism came to South Africa, in Daily Maverick

Photo: Lonmin employees gather on a hill called Wonderkop at Marikana, outside Rustenburg in the North West Province of South Africa, August 15, 2012. The following day, 34 of them were dead, 78 were wounded. (Photograph Greg Marinovich)