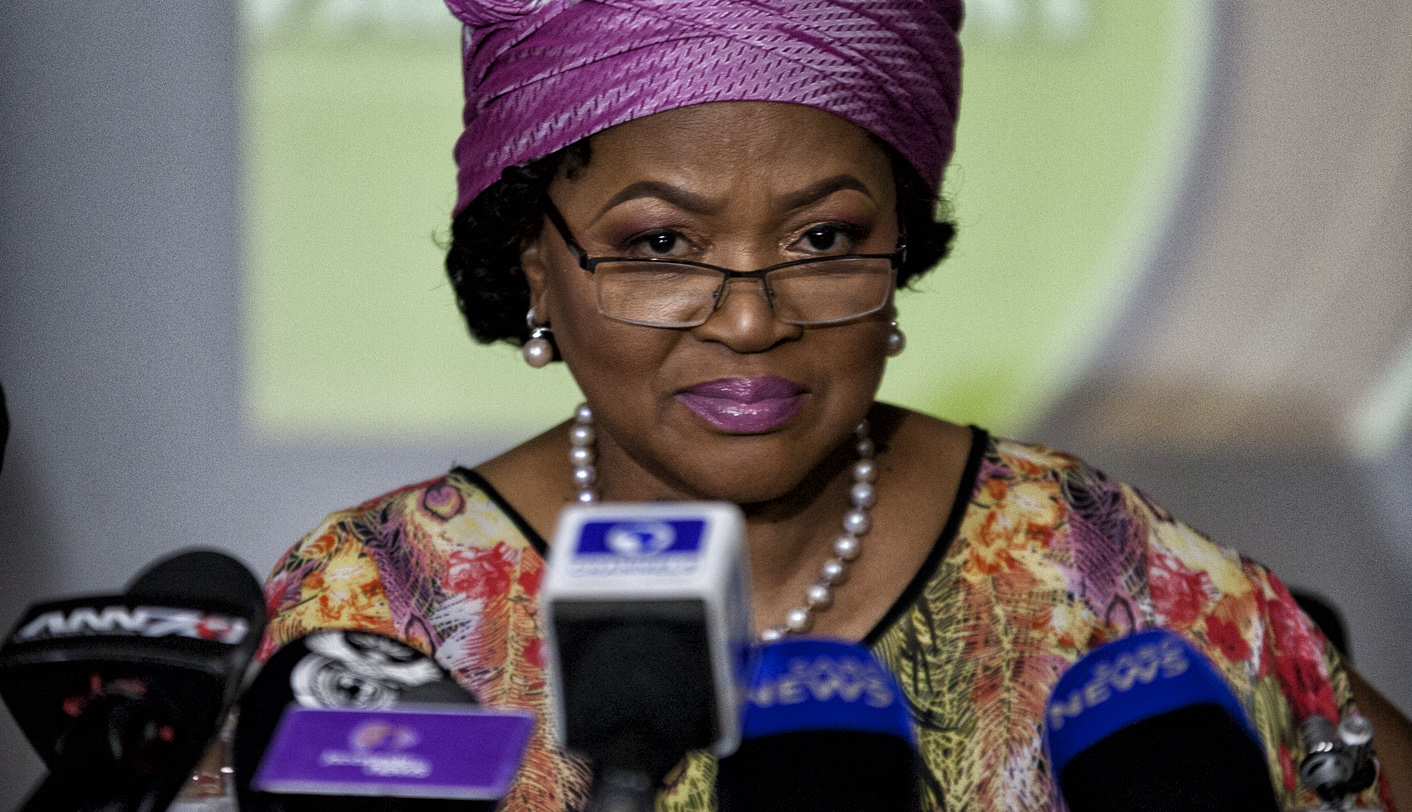 A careful political chess game is unfolding at Parliament over whether a secret ballot might be the order of the day for the scheduled motion of no confidence in President Jacob Zuma. Several opposition parties have indicated their concern over the silence to date from National Assembly Speaker Baleka Mbete, who is also ANC national chairperson, on which way her decision will go, some 10 days after the deadline for party-political submissions on this matter. Depending on what happens in the next few days, the 8 August no confidence motion may, again, cause chaos in the House. By MARIANNE MERTEN.

The EFF will on Tuesday write to Baleka Mbete for an indication of her decision, or at least when it could be expected. The DA has consulted lawyers on whether legal action might be in order to try to break the silence in good time ahead of the no confidence motion. Others, like the United Democratic Movement (UDM) and the IFP, are taking a wait-and-see-attitude, expecting that the National Assembly Speaker would make her decision public a week, or at least several days, before the 8 August motion so there is a reasonable opportunity to scrutinise reasons for her decision – whichever way it goes, secret or open ballot.

On Friday Mbete asked political parties to “to afford her office the necessary space to make an appropriate decision”, according to a statement by Parliament. Issued in response to DA Chief Whip John Steenhuisen’s deadline for a public decision by that day, Parliament’s statement pointed out that a decision would “be made and communicated to parties at the earliest opportunity, before the scheduled debate…”

Parliament’s statement added that while the Constitutional Court ruled that Mbete had the discretion to determine the voting procedure, it “did not prescribe a specific time frame within which such a decision must be made”, but that “due regard must… be given to the circumstances prevalent in a particular case to ensure that the test of rationality is met. The circumstances in the case in question require careful consideration”.

Most if not all opposition parties supported a secret ballot in their submissions by July 14 as requested by the Speaker after last month’s Constitutional Court ruling, while the ANC at Parliament indicated it would accept a decision either way. A total of nine of the 13 parties represented in Parliament made submissions, Parliament confirmed in a statement earlier this month.

Zuma in his last parliamentary Q&A in late June indicated that he saw no reason for doing anything differently from the previous seven no confidence motions. In response to a direct question on the secret ballot by Freedom Front Plus Chief Whip Corné Mulder, Zuma replied: “We should do what we have done in the past. Because I see no convincing reasons why we should change… You are trying to get a majority you don’t have. I think it is not fair…. Let us vote the way we have done in the past”.

While it might be only speculation at this stage – a week in politics is a lifetime, or so the saying goes – there is a possibility that the official announcement could be left to the last minute, particularly if Mbete’s decision is for an open vote when every MP’s choice is recorded by name.

In the detailed political calculations, an open vote would up the pressure on those ANC MPs considering a vote of conscience. Dissent in public would make it easy to identify, and discipline, those bucking the party line. That’s what the ANC said immediately after last month’s court ruling that it would do, and more recently at its national policy conference earlier this month. Broadly speaking, the argument is one of closing ranks: the governing ANC could not support the opposition to vote out its president and ministers and deputy ministers who would also have to resign if the no confidence motion is carried in terms of Section 102 of the Constitution. Finish and klaar.

Is the ANC perhaps hoping for an opposition walk-out following a last-minute announcement, and then proceed with an open vote and defeat the opposition motion of no confidence in Zuma? That motion done and dusted, it would then be back to business as usual for the governing party, with the possibility of future gleeful jeers at how it defeated opposition opportunism.

If opposition parties raise a parliamentary stink over a last-minute open vote announcement, this may lead to chaotic trading of verbal spars across the floor. Ultimately, should this get put to a vote, the ANC will have its day given its numbers – 249 of the 400 National Assembly seats – and certainty all its members are under instruction to attend the sitting.

A secret ballot would require the governing ANC to be confident it has all its MPs under control. And that may just be a risk too far. There is an increasing amount of privately expressed dissatisfaction in its fractured parliamentary caucus and the much more public statements for a vote of conscience by ANC MP Makhosi Khoza. Meanwhile, South African Communist Party (SACP) members have yet to formally decide their approach: they are in Parliament, as MPs or ministers and deputy ministers, on an ANC ticket and thus bound by ANC party line even if in their SACP capacity they have asked Zuma to step down. At least one SACP member weeks ago indicated a personal decision to vote in support of the motion.

For the motion to carry it requires 201 yeas. That means opposition parties would need the vote of at least 50, but preferably a more comfortable number like 70, ANC MPs. It’s a tall order, but given various discussions and chats, not an impossibility, according to the opposition parties.

The ANC has its own strategy and tactics with party discipline looming large. And Khoza may just be made an example of. She has confirmed she was told to expect disciplinary charges on Tuesday from the ANC in KwaZulu-Natal, her home province. “I must not make it to the eighth (of August),” added Khoza. “I think they are trying to intimidate ANC MPs like me… The ANC wants President Zuma to continue. They don’t care to sacrifice people with skills, talents.”

At least after weeks of threats following her outspokenness, steps are under way for her to receive security. Parliament in a statement said an SAPS assessment indicated “confirmed that a security threat existed and that appropriate support must be provided to Dr Khoza”. It is understood arrangements are still being finalised, according to an insider.

Whether to secret ballot or not to secret ballot, politically there are plenty of considerations for the governing ANC. And if Mbete might currently be leaning towards an open vote, she would want to ensure her reasons are watertight to withstand any court challenges. Cutting down on the time between her announcement and the actual motion would help stave off any legal review.

UDM leader Bantu Holomisa, whose party took the secret ballot matter to court, said Mbete should give opposition parties time to study her reasons for her decision, with seven days being reasonable. “The pressure is now, please, give us more time. It must not be a last hour thing.” If the decision was announced just ahead of the debate, Mbete would “display she’s biased, she’s playing games”.

If the decision was for an open vote, the UDM would ask for a postponement of the motion of no confidence in Zuma to study reasons for an open vote. “If she says no, I don’t think she can do that. We would make sure we win the case… from within the House,” Holomisa said.

Steenhuisen said if Mbete put the Constitution and Parliament first, she would make her decision known well before the no confidence motion. It would be “reckless” to announce it just ahead of time and cause chaos in the House if it was for an open vote. There would be no time to if the decision was announced just before the no confidence debate, particularly if it was for an open vote.

EFF Chief Whip Floyd Shivambu said the party is writing to Mbete “so we know where we stand”, and would take it from there.

IFP Chief Whip Narend Singh said the decision on the no confidence motion vote should be announced “three or four days before”. Until it is announced, there was nothing to be done as Mbete’s reasoning was key to considerations of whether to take her on review to court.

Of course, Mbete may well decide to announce a secret ballot well ahead of time.

Regardless of what happens on 8 August, the vote of no confidence cannot be separated from the five-month journey to the December ANC national elective conference. DM

Photo: Speaker Baleka Mbete addressed media at OR Tambo international Airport on Sunday 2 April 2017 after opposition parties launched a motion of no confidence vote application against the president. (Greg Nicolson)