The Themba Godi Interview: The paw-paw has hit the fan, but there is hope 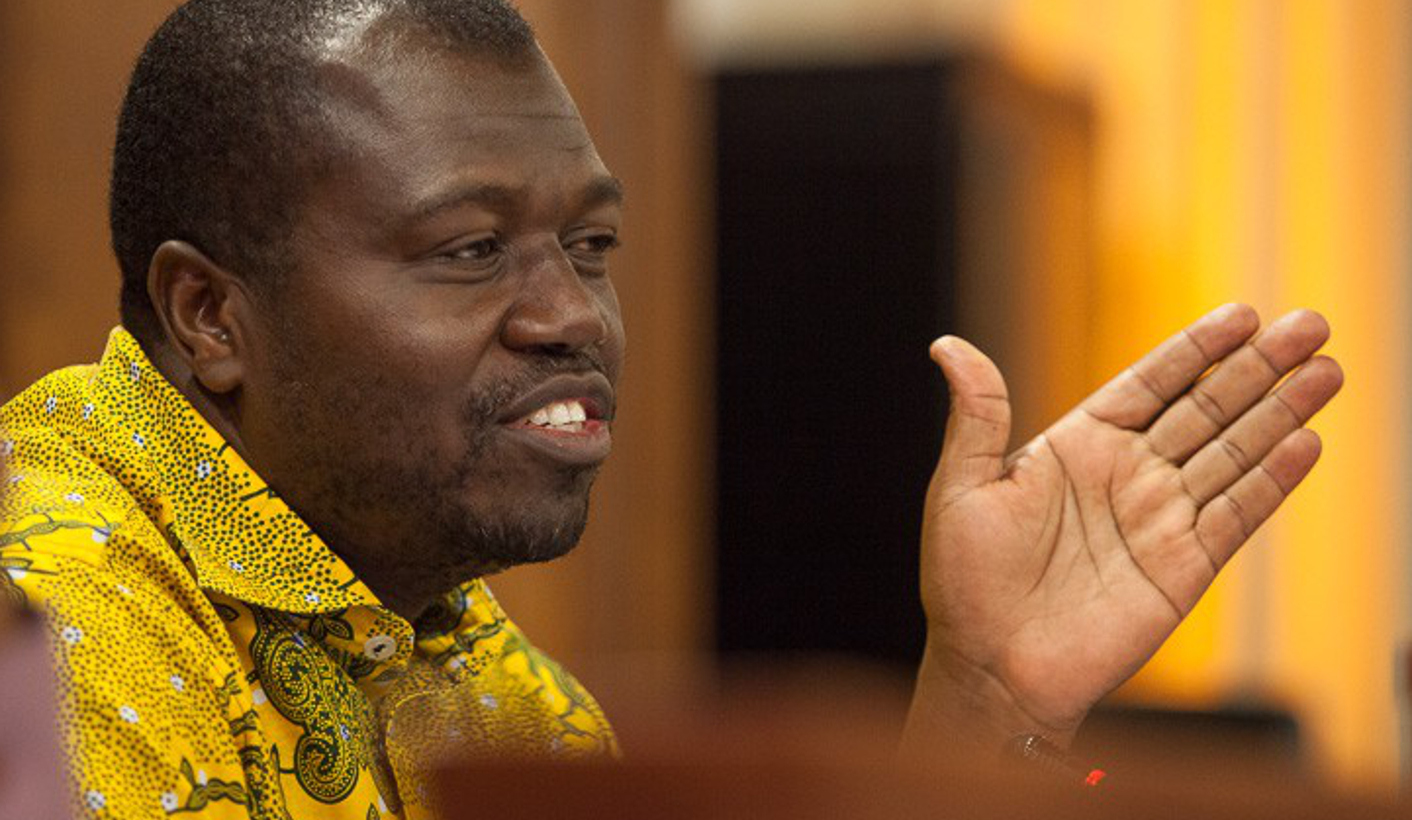 When Parliament resumes for the third quarter next week, Scopa’s programme will be crammed with urgent matters as well as regular oversight of government’s financials.  Despite the ubiquitous rot, chairperson Themba Godi has not lost hope of a turnaround. “There should always be hope. We cannot surrender to wrongdoing.” By JANET HEARD.

Themba Godi is an old hand at chairing the parliamentary watchdog committee tasked with calling government to account for public expenditure irregularities and looting. Yet there are so many runaway fires right now that even he is struggling to prioritise.

Since closing a frenetic second quarter programme, there has been no let-up in controversy within the country’s troubled entities and departments during the July parliamentary recess. So much so that Godi has had only one day to relax at his home in Mpumalanga. “Other than that, it has been pouring,” Godi told Daily Maverick.

Flooded by reports of corruption, wasteful and irregular expenditure and state capture, Godi admitted that this was one of the most challenging times in his 12 years as chairperson of the Standing Committee on Public Accounts (Scopa).

“There are so many fires, I don’t know which one to start putting out first,” he said.

When Parliament resumes for the third quarter next week, Scopa’s programme will be crammed with urgent matters as well as regular oversight of government’s financials.

First up is Social development minister Bathabile Dlamini and the SA Social Security Agency (Sassa), who would be called to account (yet again).   This had become more urgent with the resignation last week of Sassa chief executive officer Thokozani Magwaza, who had received death threats. Godi said it was imperative that the SA Post Office took over payment of social grants – by the April deadline. “The removal of Magwaza should not be a pretext to renege on his plans with the post office. The Post Office is the one entity that has capacity. We will be calling the minister and Sassa in the first week to find out their plan – we need timelines, phasing in and phasing out … It could be catastrophic for millions of people if it is not sorted out.”

Answers were also urgently needed from Water and Sanitation minister Nomvula Mokonyane, who would be called to account for the technical bankruptcy of the department, controversy over tender disputes and suspension of top officials, including director-general Dan Mashitiso who was appointed just eight months ago. Revealing the juggling act confronting the committee, Godi warned: “The implications of not having money for the provision of infrastructure is not more important than Sassa, but it is a problem that affects us all. If that department collapses, the entire country plunges.”

SAA’s woes were a constant headache, with interrogation of the airlines finances put on hold last quarter due to the delay in submitting its annual report. “The things we have been hearing are very disconcerting and SAA remains a priority,” said Godi, adding that he would meet the Auditor-General this week. Last month, SAA received yet another bail out, of R2.2-billion. It emerged last week that it will be funded by the sale of state assets, with the airline accumulating losses of R15.7-billion over the last five years.

The committee would retain a close watch on the SABC’s finances. Here Godi was hopeful that financial recklessness and irregular expenditure were being brought under control under the interim board and with internal audits on the cards as well as a probe by the Special Investigations Unit. It was imperative that the era of impunity had been brought to an end. “This culture had been worsening, people knowing that they could mess up and nothing would happen.”

The resignation last week of acting CEO James Aguma in the midst of his disciplinary hearing, was a sign of guilt, said Godi. “The allegations against him are serious. I would imagine he had an interest to clear his name, so to just walk away, he can only do so if he has done something wrong.”

Godi warned that Aguma was not off the hook, and investigations would continue. “He may have tried to escape embarrassment by walking away, but he is not absolved.”

Ongoing #Guptagate revelations have exposed the extent of abuse of state coffers, with Eskom on Scopa’s radar. However, as the Public Enterprises portfolio committee was starting an inquiry into maladministration, governance problems and procurement issues at the power utility on August 1, “it would not be wise (for Scopa) to deal with Eskom while this was unfolding”.

Claims of irregularities over Treasury’s Integrated Financial Management System software licence contract will be high up on Scopa’s to-do list, with the finance minister to be called to account.

Despite the ubiquitous rot, Godi has not lost hope of a turnaround. “There should always be hope. We cannot surrender to wrongdoing.”

He was encouraged by the fact that committee members had found common ground over the past year, which had made oversight more effective.

“We have been able to find each other. There is synergy. In hearings, you can’t tell who comes from which party. We are thankful that political parties have allowed members to work without the normal political pressure to toe a party line. This is a new thing,” he said, adding that it was not just the ruling party that previously had drawn ranks but also the DA that had used the committee for politicking.

“Also, if you look at the way the EFF interacts in the house compared to Scopa – let’s just say that I am happy.   I hope it is sustained, to become institutionalised.”

Recalling the challenges he experienced in 2005 when he first became Scopa chairperson, Godi – leader of the African People’s Convention and the only non-ANC parliamentary committee chairperson – said that although the controversial arms deal had already passed through the committee, “the distrust and divisions were still there”.

Besides current MPs finding a common purpose, Scopa had also sharpened its focus. In the past, Scopa scrutinised and engaged a department or entity on the entire annual report. “Last year we focused on irregular, wasteful and fruitless expenditure only, which has made us more impactful.”

He concedes that if Scopa had started off with a narrower focus, less could have slipped through the cracks. “Post-1994 oversight has been an evolving process. It could have evolved a little faster. Parliament could have and should do better, to grasp the key issues and focus and to drill down and ask incisive questions.

“If Parliament can sustain its current approach, there will be reason for hope. Secondly, there is acceptance by all political parties that good governance is not negotiable and that corruption is a problem … The public are more aware. That is what will lead to self-correction.”

Revelations about the Guptas had exposed the public to state capture, even though Godi cautioned that this was not unique to the Guptas.  “The Gupta thing has helped to open our eyes around issues of ethics and to have a sustained conversation and enhance good governance,” he said adding it served as a warning to others.

Godi does not feel fatigued despite the avalanche. “My approach is political. I look at the context. We fought for freedom for the lives of our people to be better. It is still very raw. That is what drives me, I can’t get fatigued. That would mean giving up on what we have fought for.

“There is hope, arising not so much in a change of attitudes of political parties, but more so in the awakening of the masses, that is the deciding factor. The issues around state capture have caught the attention of the nation in a way that even the arms deal didn’t.   This is important. It affects the behaviour of the people, determining how they will vote.” DM

SIDEBAR: Godi says he is no lapdog

Themba Godi insists he will not be dictated to by any party, be it the ANC or opposition parties.

The lone voice of the African People’s Convention (APC) in parliament, Godi was guarded about plans for the upcoming vote of no confidence in President Jacob Zuma.

His party had discussed the issue, reflected on it and taken a decision, but they would not pronounce before.

Godi voted against previous opposition motions of no confidence in Zuma and has faced criticism that he has been soft on the ruling party.

Godi supported the recommendations of the ad hoc committee on the police minister’s report on Nkandla, which absolved Zuma of all accountability. This was subsequently found to be inconsistent with the Constitution and the report was invalidated in a damning judgment by the Constitutional Court.

In a change of tack this year, Godi took part in the opposition’s mass march against Zuma in Pretoria, calling for him to step down.

“The march in April was a demonstration that we can’t assume we are aligned to the ANC.

“The APC has always taken an independent perspective, without heading in another party direction. You will have seen I have largely ignored the fascist conduct of the DA and the EFF shouting at me to do this and that.”

Godi is grounded in the ideology of the Pan Africanist Congress, as a former leading member.  “We fought for freedom with the ANC. Though our criticism of the ANC remains, it cannot be the same criticism as the DA and Freedom Front. It is the balancing act that we need to strike. Also we have said that our bark and bite will be in line with our capacity as an organisation.”

Godi is the only non-ANC MP chairing a parliamentary committee, in line with a ruling party tradition that the public accounts committee be led by an opposition MP.

Godi has no regrets about his stand through the years.  “I don’t like emotion. I am the kind of person who doesn’t rush into decisions. I make sure I have applied my mind, and only after I am convinced I am doing the right thing.” DM