Lone Ranger: Vytjie Mentor on the groper president and the ANC’s lost soul 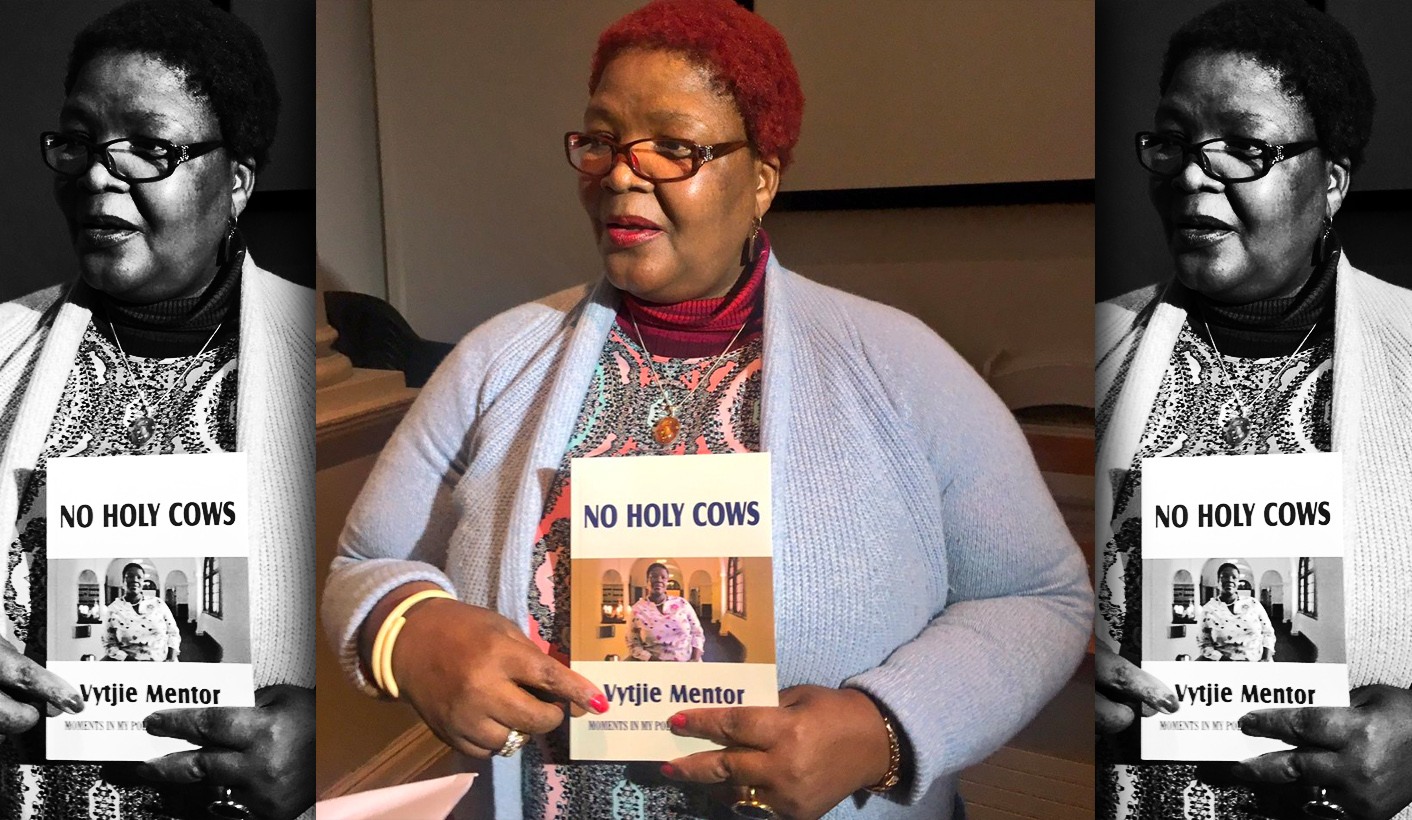 Everyone in the ruling party understands: what happens in the ANC stays in the ANC. Obedience and loyalty are key tenets. Under the leadership of Jacob Zuma this fidelity would morph into a form of Omerta, the Mafia’s code of silence and non co-operation with the outside world in matters of criminality. However, the edifice cracked in March 2016 when Mcebisi Jonas revealed the Gupta family had bribed him to accept the Finance Ministry. ANC MP Vytjie Mentor blew the whistle soon afterwards and has been hanging the ANC’s dirty laundry out to dry ever since. By MARIANNE THAMM.

Vytije Mentor has been through the wringer. So much so that her “self-penned” autobiography, which she has titled Fire and Grace, grew too large to publish as a single book, she tells us. On the advice of three different publishers Mentor opted to extract the most salient parts of her political career between 2002 and 2017 in 30 chapters of a self-published book titled No Holy Cows which she has just launched.

Of course, the chapters that have immediately attracted intense interest are those that expose Jacob Zuma’s hypersexual predatory nature and the culture of sexual entitlement that pervades the party. The portrait Mentor paints of the president is one of a grifter and a groper, a hustler who always has time for a deal or a possible bit of sexual action on the side.

She first met Zuma at the ANC’s 48th National Conference that took place in July 1991 in Durban. It was the first to be held in South Africa since the unbanning of the party. It was here that Nelson Mandela was elected President of the ANC, the beginning of a new phase in South Africa’s history.

Already then, Mentor suggests, the shadow of corruption that now darkens South Africa’s young democracy crouched and lurked, shielded by the loyalty and wilful blindness of some party members who needed to rebuild the organisation as well as prepare it to lead.

“Historically it has always been an unwritten norm in the ANC that comrades are expected to close ranks together and not expose one another publicly in order to try and ‘save the image of the organisation’.”

Mentor writes that she has always found this approach problematic “as I believed that if the ANC was truly a leader of society that claimed it was, it had to be open to the very society that it claims it is leading even when members – especially senior ones – transgress”.

Mentor first encountered Zuma seated in the back seat of a green Toyota Camry parked outside the plenary hall in Durban. When he learnt that she was from Kimberley in the Northern Cape, Mentor says Zuma asked whether she could arrange some diamonds for him. Zuma also almost immediately made a play for her, says Mentor, who was breastfeeding her daughter at the time.

There are other stories about Zuma as head of the ANC’s Political Committee and later as Deputy President. Mentor describes how he chased her from couch to couch in his office in Parliament during a meeting in an attempt to slip his hand between her legs.

Mentor has always been a larger-than-life figure, a fighter, fearless, brave, outspoken, but sometimes inappropriate or too quick to temper and accuse. Like this week when she mysteriously threatened on Facebook (one of her preferred means of communication) veteran journalist Crystal Odersen writing:

“Dear Crystal Oddersen (sic). I may appear like a fool to you, but trust me, I am not. When I am done with you, you will be crying snort [sic] and tears.”

In the current climate where journalists are threatened and attacked by BLF thugs and fascists, Mentor’s inappropriate tone reveals a lack of political intuition and savvy.

Orderson returned to Cape Town after an out-of-country assignment to find the threat on her Facebook wall. She had no idea, she told Daily Maverick, what is was all about.

Later Mentor apologised publicly on Facebook saying she had been “displeased” by the fact that Orderson, a senior producer for Al Jazeera, had interviewed her at least eight weeks ago and that nothing had appeared yet. She also demanded to see a draft of the story, a habit most journalists are not happy to oblige.

It is this sense of entitlement and grandiosity, this referring to herself in the third person, this painting of herself as anointed and blessed, this messianic and self-righteous tone, that the reader of her book needs to get over, get used to and forgive.

Because ultimately, with all her annoying faults, foibles and tendency towards intemperance, Vytjie Mentor is a patriot and a woman committed to the people of South Africa.

She is an activist and a politician, a woman who is a devout Christian, who has always had a sense of destiny from her early years as a student activist, as a teacher, as a fugitive from the apartheid state to the start of her political career as an executive mayoral committee member in the Northern Cape.

It was Northern Cape Premier and ANC Provincial chairperson, Manne Dipico, who had submitted Mentor’s name to Luthuli House to fill one of nine seats allocated by the IEC to the ANC.

Mentor had been shafted by the ANC in 1999 when she was deputy secretary of the Francis Baard region and found herself a casualty of the slate and money politics that have now taken firm root in the ANC. Mentor’s name had been removed from the election list through foul means. It was then that John Block (now serving a jail term for corruption) was elected as Chair of the Province.

Mentor was sworn in as an ANC MP in 2002 along with Nathi Mthethwa. She writes that Mthethwa “would later become a Minister of Police under Zuma, and under his watch a democratic government would mow down thirty-nine poor miners at Marikana”. (On 16 August 2012, the police shot 34 miners dead, and 78 were injured – Ed)

She had known Mthethwa for many years, she says, and he had gone from being an “articulate and committed comrade” to a man who was “very angry and short-tempered… very inconsistent”.

She attributes Mthethwa’s change of behaviour to a “not-so-good encounter with one of the women that were in the same political space with him” and claims that Malusi Gigaba, who was President of the ANCYL at the time, “was instrumental in seeing that the matter was dealt with in hushed tones and indirectly”.

Later, after she had been appointed National Chair of the ANC Caucus, she says she appointed Mthethwa as an adviser as she knew him to be “masterful in politics and ideological matters”. But in 2007 before the Polokwane conference where Jacob Zuma was elected President, “I began to witness yet another side of Nathi Mthethwa that I did not know existed before. I began to see the ugly side of factionalism, tribalism and regionalism/provincialism”.

Of Nathi Nhleko, who was Chief Whip when Mentor was sworn in as an MP, she writes, “he was still very much opposed to corruption and he and I had many discussions together as we were both very worried that the ANC was not doing anything about the corruption that was increasingly becoming a problem in government”.

Later she says Nhleko too became a “changed man” and that “his values and principles had changed drastically too”. She says she had tried several times when Nhleko was Commissioner of Correctional Services to bring corruption to his attention but to no avail. She writes that she was “very hurt” when Nhleko became “one of the people who vehemently defended the Nkandla spending”.

Mentor also writes of her clash with former Minister of Public Enterprises, Barbara Hogan, who later revealed that she had been placed under pressure to favour the Gupta family’s Jet Airways. Mentor clashed with Hogan over her firing of Transnet CEO Siyabonga Gama.

Mentor writes that she had “refused to give up on the Transnet matter without a fight” and that she had “gone solo” and presented what she had to the Public Protector. She also clashed with Hogan with regard to the canning of government’s Pebble Bed-Modular-Reactor project.

Her first encounter with the Gupta brothers appears to have occurred in 201o on her controversial trip to China. She reveals that the President’s son Duduzane had introduced her to “his friends and business partners”. On that trip she alleges that a mysterious man (who later turned out to be one of the Gupta brothers) called her hotel room and summoned her to see Zuma who was staying at the Chinese Presidential Guest house.

“I respected myself too much to allow anyone to treat me like a cheap prostitute that would agree to anything just for positions or for money, whatever the reason was that the president had wanted me…”

Mentor writes that while she had suspected Zuma’s motives that night might have been sexual, “it now looks like it was very politically calculated to move to get me on the side of the president – and of the Guptas that run the President – so that I should not stand in their way or oppose their actions when they loot and direct the business of State Owned Companies towards their own companies for their own benefit and gain”.

No Holy Cows (Published by Vymao Industries) is a tell-all tale of sordid immorality and corruption. It exposes to the bone the rot in the ANC and those whom Mentor says has aided, abetted and facilitated it. Mentor attempts to explore what it is South Africans should do to arrest the backslide into a kleptocratic state and calls, in her final chapters, for a Marshall Plan for South Africa that will involve and include political parties, civil society, trade unions, religious organisations and former heads of state.

She also urges that the perpetrators be charged – even says she hopes Advocate Gerrie Nel would do so – and that South Africans should support Afriforum in this endeavour.

Mentor’s book is self-published and she apologised at the press launch in Cape Town for the number of literals and errors in the manuscript that she had hurriedly sent off to the printers before it had been proof-read. DM

The pits: And the gold medal for the worst(ness) of both worlds is…