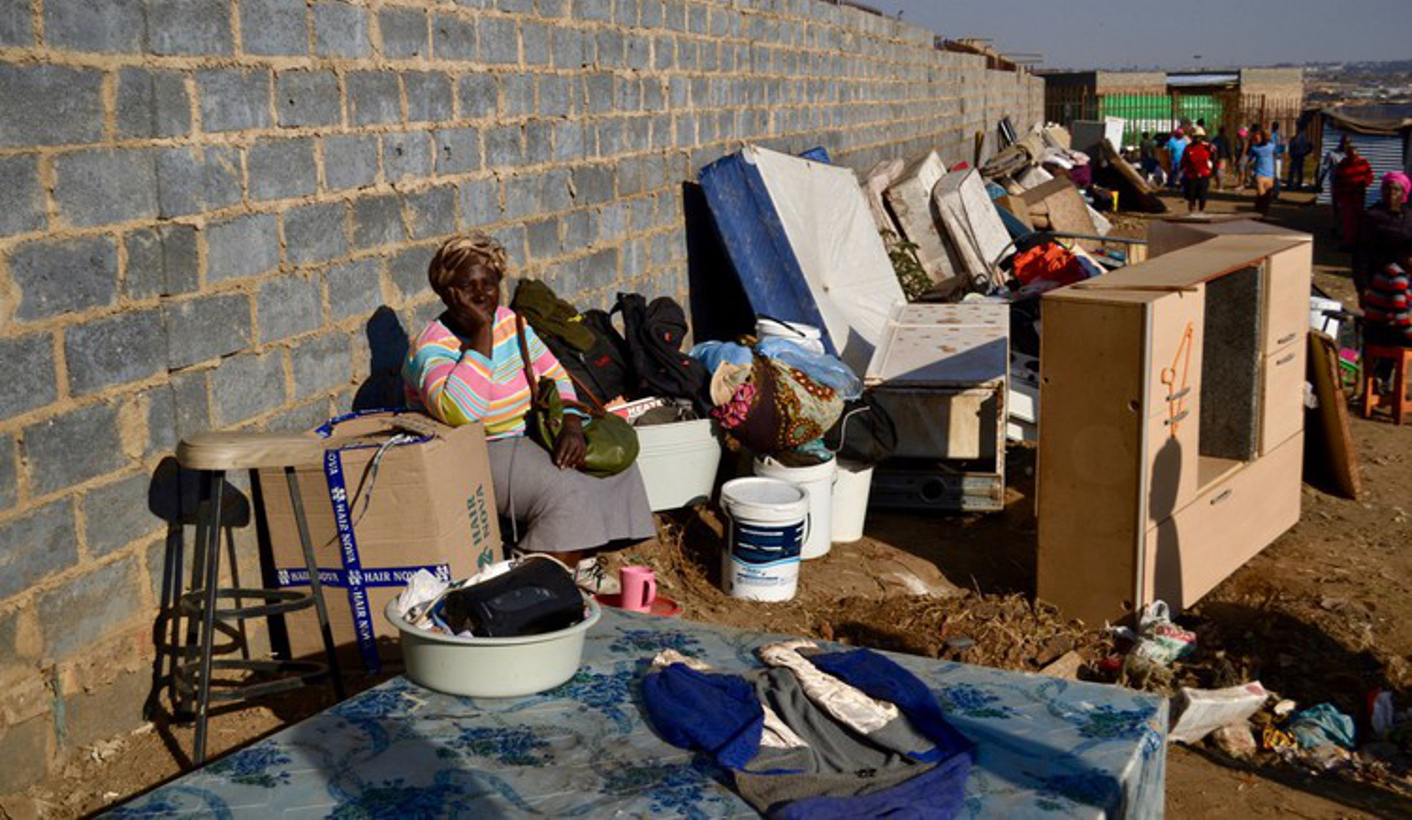 Residents also claim their belongings were stolen during evictions. By Andrew Bennie for GROUNDUP.

On Tuesday, the Red Ant Security Relocation and Eviction Services (commonly known as the Red Ants) evicted shack dwellers on the border between Ivory Park and Tembisa township. Residents once again accused the Red Ants of violence and theft of their cellphones and cash.

According to the Ekurhuleni Metro Police Department (EMPD) about 700 “illegally erected” shacks were removed by the Red Ants.

The evictions targeted the site where a land occupation started in late 2016, the area known as Dali Mpofu settlement in the Montsu Section, Extension 5 of Tembisa, bordering on Section 7 of Ivory Park.

Residents say that they were not given prior warning that their shacks were to be demolished. Many residents have been living in their shacks on the occupied land for six months. The Red Ants arrived at 9am  and gave them time to remove their belongings.

According to the metro police, it was tasked by the municipality to attend to the evictions, together with public order police and the South African Police Service (SAPS)  to ensure safety and security. Metro police said the evictions “went well because no casualties were reported” and no arrests were made.

But residents say that some of them tried to defend their shacks, and running battles between the Red Ants and occupiers broke out. One man said that as the Red Ants were advancing, he got his two daughters to run away while he stayed behind to defend the family’s shack. He says he was shot with rubber bullets by the Red Ants and they also hit him with a crowbar.

The man says the Red Ants then marched him towards one of their trucks but he was “saved” by SAPS members who told the Red Ants to release him.

He says in the end, the roof of his shack was removed, but not the walls.

GroundUp has seen a cellphone video that appears to show a Red Ant carrying a firearm. Several people showed us their rubber bullet injuries. The Red Ants have not responded despite our best attempts to get comment since Wednesday, including three emails, two phone calls to the organisation’s front desk and multiple calls to an employee’s cell phone. We would have wanted to ask about the legality of Red Ant employees  using their firearms and the training they’ve received.

EMPD’s Media Liaison Officer, Khobeli Mokheseng, confirmed that the Red Ants usually carry pump action rifles that fire rubber bullets when they undertake evictions, due to the responses they often receive from evictees.

As with the previous eviction, residents again accused the Red Ants of stealing cellphones and money. One resident said R1,400 was stolen, another claimed that R650 was stolen.

Eye-witnesses said the Red Ants broke down the door of a backyard room in a  nearby RDP house (unrelated to occupations)  and demanded cellphones. They allegedly made off with three. They allegedly broke the house’s only tap with a crowbar on their way out.

Metro police said anyone who had cellphones or money stolen by the Red Ants should open a case at the nearest police station.

Some residents who had removed their belongings found that their shacks were not demolished, but they were afraid to move back in. At sunset, people were still scattered across the settlement, sitting in the open with their possessions. Some started to dismantle their shacks, fearing the Red Ants would return.

Hours after the Red Ants had left, the anger of residents was palpable. A man took a handful of bullets out of his pocket and said: “When they [Red Ants] come back again, I’m going to shoot them. I’m going to shoot them… Why do they destroy our properties? We have spent a lot of money to do this and we are not working. This shit government, I’m not scared of them.”

The Ekurhuleni Municipality confirmed that they did not acquire an eviction order as they intervened within 48 hours of the shacks being erected. However, some residents say that they have been living on the land for three  months, and others say they had been living there for seven  months, since the occupation first took place in late 2016.

After the death of Mabunda land activists in Ivory Park opened a case with the Independent Police Investigations Department (IPID). IPID has confirmed that it is busy with preliminary investigations to decide whether to proceed with a full investigation.

Activists lodged a complaint with the South African Human Rights Commission (SAHRC) as well as with the Private Security Industry Regulator of South Africa (PSIRA) regarding the role of the Red Ants.

Rights groups Amnesty International and the Right2Know campaign have since offered their support after reading the GroundUp reports. DM

Is it legal for private security to fire rubber bullets?

We spoke to a  researcher with expertise on this issue, but who wanted to remain anonymous. He said that the Red Ants are “basically assaulting people” and asked what gave them the legal authority to assault people.

“They have as much permission as you’ve got,” he said. He referred to a previous case where the Red Ants argued that they were protecting themselves, something that they could try to argue in this case.

“I imagine its grey area in law but people if they are acting lawfully then basically they do have the right to defend themselves,  preferably with less lethal means. The question is whether there is an obligation to retreat.”

He also spoke of a recent death of two Red Ants in Hammanskraal, which might have led to the Red Ants being regarded as “cannon fodder”. He said that the use of rubber bullets may be a new development that the company has taken following the deaths of two of their employees.

All this raises another question: Are Sheriffs of the Court using private security to carry out evictions because police are too afraid to, while the people hired by private security firms are desperate for work and will therefore do it?

Photo: Residents sit with their belongings after being evicted by the Red Ants. Photo: Andrew Bennie