ISS Today: Is it Raila Odinga’s turn to eat? 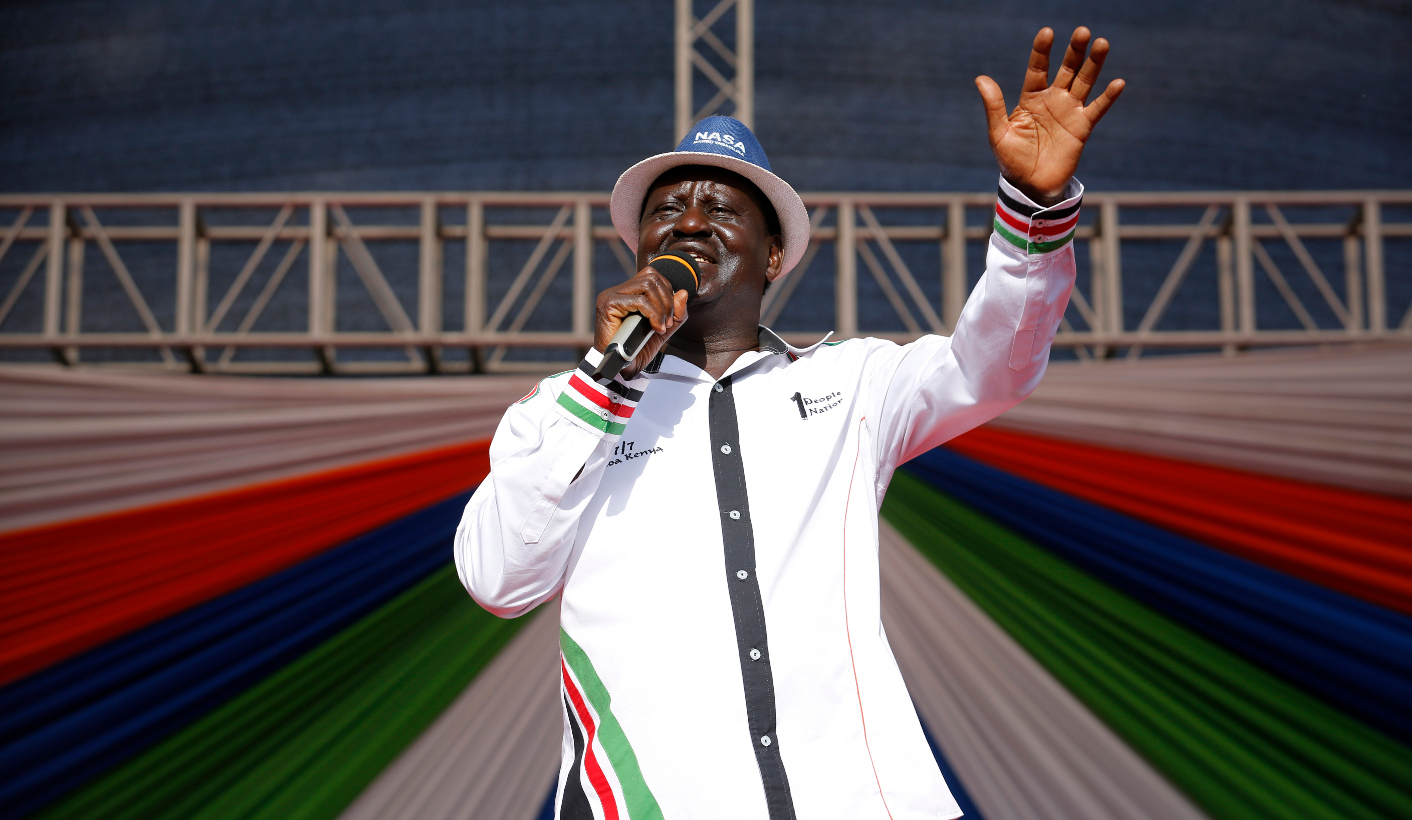 Kenya is heading for another dangerously close election. By Peter Fabricius for ISS TODAY.

Will it at long last be Raila Odinga’s turn to eat? This is one of the critical questions as Kenya heads into general elections on 8 August.

The other question is whether the polling will be peaceful. The wounds of the political violence that engulfed the country after the December 2007 elections, killing some 1,200 people, have not entirely healed, despite the relatively peaceful intervening election in March 2013.

Though several hundred people died in the months running up to that poll, a combination of factors – not least the political will by leaders not to allow a repetition of 2007 – minimised bloodshed in the election itself. Most analysts believe that willpower will again prevail, though they also warn that many potential flashpoints remain in  Kenya’s politics.

Key among those is the likelihood of a close race – and therefore a contested outcome – in the presidential poll where Odinga has gained about 12 percentage points in six months to trail President Uhuru Kenyatta by only 5%. They and their coalitions are each commanding more than 40% of voter support, making this essentially a two-horse race and suggesting a very unpredictable run-off contest.

Kenyatta, heading the Jubilee Party and coalition, is running for a second and last term while Odinga, leader of the Orange Democratic Movement (ODM) and National Super  Alliance  coalition (Nasa), is contesting his fourth election. It was his narrow defeat to Mwai Kibaki in the 2007 election and his refusal to challenge it in court – because he believed that both the electoral process and the courts were rigged – that sparked the violence.

Though Kenya has adopted a new constitution since then, including measures to make the courts more independent, there are still question marks over the judiciary and the Independent Electoral and Boundaries Commission (IEBC) that will run the elections.

Kenyatta is a member of the  Kikuyu people while Odinga is a Luo. While the Kikuyu have dominated  Kenya’s politics since independence in 1963, and the Kalenjin also had a good run during Daniel arap Moi’s record term from 1978 to 2002, Odinga’s Luo feel excluded.

In her award-winning book about Kenya, It’s Our Turn to Eat, journalist Michela Wrong explains how successive leaders have exploited their power as an opportunity for “ethnic gorging” – diverting national resources to their own ethnic group. And so Odinga was widely regarded as the Luos’ champion when he ran against Moi in 1997, Kibaki in 2007 and Kenyatta in 2013, but lost each time.

Whether ethnicity remains such a potent factor in Kenyan politics will be one of the key questions in this election. Peter Aling’o, a Nairobi-based consultant for the Institute for Security Studies, believes that “tribalism or ethnicity in Kenya is largely a political creation, exploited by politicians”. He says it’s these elites, rather than the Kikuyu people, who have benefited from Kibaki and Kenyatta’s presidencies, for example.

He and other analysts believe that the extensive devolution of power and resources to 47 new counties, headed by governors, has wrested much of the power to mobilise support on the basis of ethnicity from these elites.

In an article in African Arguments this month, Nanjala Nyabola notes that although the 2013 election was contested under the 2010 constitution, devolution has only really evolved since then. The effect has been that voters are more aware of local issues and more independent – and therefore less amenable to being marshalled by local elders doing the bidding of the ‘ethnic kingpins’ at national level.

Aling’o notes that Odinga and Nasa are pushing for more devolution in their election platform, though who will benefit from this seems to be a wildcard.

Odinga’s biggest hurdle again will probably be incumbency. After four years in power – and much longer if you factor in the related Kibaki presidency – Kenyatta has vast access to state resources which many suspect will be used to bolster their electoral prospects. The security forces and the business establishment are also perceived to be behind Kenyatta.

One observer notes that there is a perception that the security forces wouldn’t accept an Odinga victory, but suggests that this is just a rumour being circulated by the Kenyatta side to stampede nervous voters into their camp.  Except for the 1982 failed coup attempt against Moi, Kenya  has no tradition of military intervention in politics. And opposition supporters and observers are also reassured by Kenyatta’s recent insistence that if he loses in August he will retire from politics.

Even so, some Kenyans fear the country’s involvement in the war in Somalia for the past five years, fighting al-Shabaab, is straining the democracy. Al-Shabaab has retaliated by launching several terrorist attacks inside Kenya. This conflict has shifted power towards the securocrats and prompted calls by the government for stronger, more authoritarian government to fight terrorism.

Uncertainty about the election outcome is also keeping investors skittish. They are mostly sitting on their money until after the voting, says Kwame Owino, chief executive of the Institute of Economic Affairs in Nairobi. The economy is nonetheless growing at nearly 6% – among the fastest on the continent and considerably boosted by the $3.8-billion pumped into the first phase of the Standard Gauge Railway Project.

Such growth elsewhere would suggest almost certain victory for the incumbent. One economic commentator, however, noted that food prices and inflation were rising and that this could yet be a telling economic factor in the elections.

Another factor favouring Odinga is the absence of the International Criminal Court (ICC) issue from the election. In 2013 Kenyatta and his running mate William Ruto had just been indicted by The Hague-based court for allegedly orchestrating the post-election violence in 2007/8. They used that to drum up patriotic voter support against the ICC’s supposed meddling in Kenyan and more generally African internal affairs. Since then, the ICC cases against both men have collapsed.

Despite all that, it is hard to see Odinga winning on 8 August. Even if the outcome is close enough to suggest Odinga might have won in a fair fight, most observers predict an official Kenyatta victory, again endorsed by the Constitutional Court if Odinga chooses to dispute it.

It goes without saying that Kenya should be – and seems already to be – evolving beyond rotational “ethnic gorging” to a state where genuine needs, fair play and justice determine the distribution of power and state resources.

But that could take a while. In the meantime, would it be so bad if Odinga and the Luo at last got their chance to eat? DM