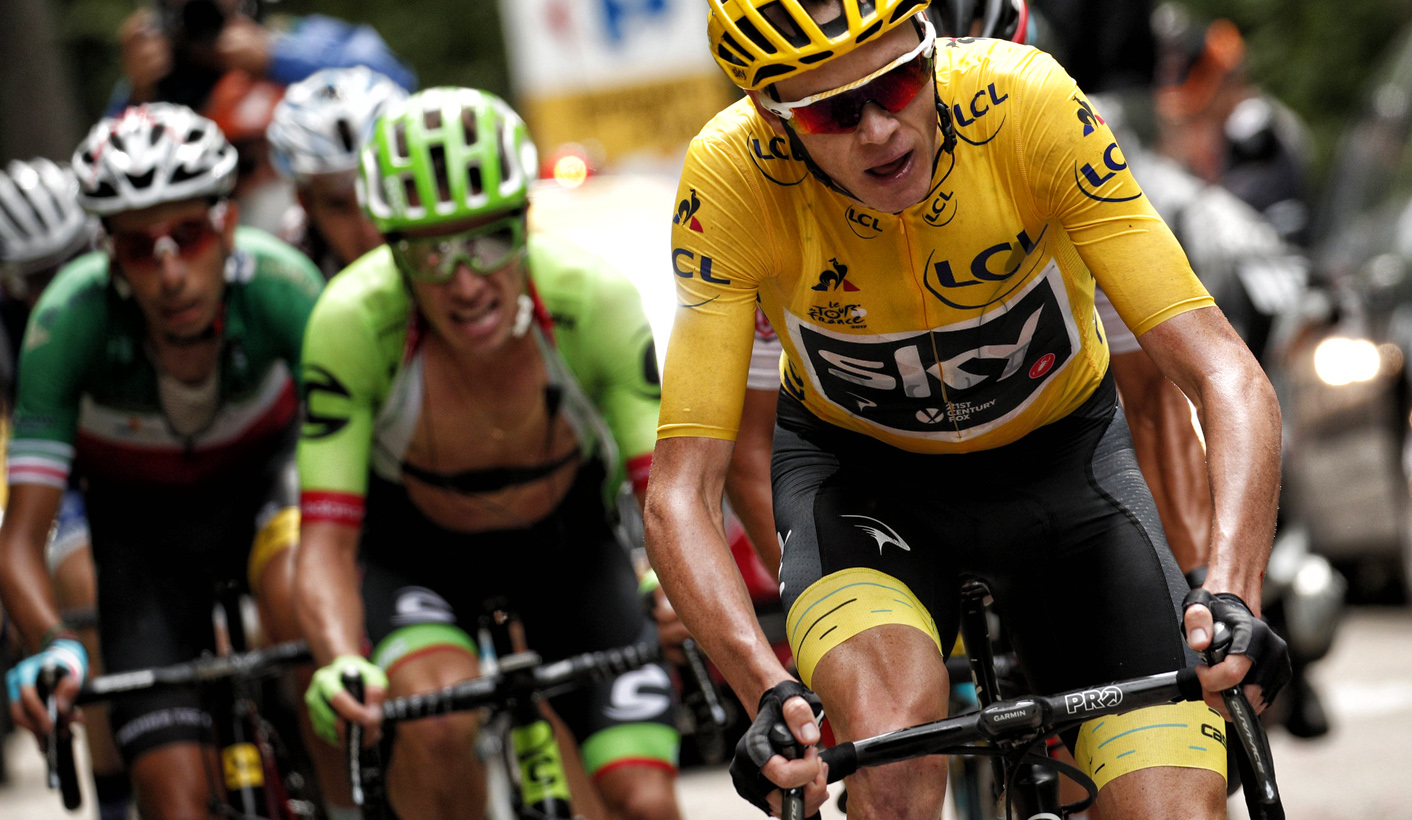 It’s turning into the tour of broken bones. Over the weekend, Geraint Thomas had to withdraw from the Tour de France with a broken collarbone. Coming off a descent on Sunday, Thomas crashed out with 100km left to go on the stage. It was Thomas’ fourth crash of the race. His team announced the news of his withdrawal on Twitter.

Nine riders, including Mark Cavendish, have now withdrawn from a race that has been quite epic, and this weekend was no different.

The two days leading up to Sunday were thrilling. On Friday, Marcel Kittel won his third stage of the 2017 by 6mm, just beating Team Dimension Data’s Edvald Boasson Hagen in Nuits-Saint-Georges. The two went head-to-head in the final sprint and on first glance it looked like we’d have a rare dead heat. But after several minutes of deliberation and reviewing, Kittel was declared the stage winner.

On Saturday, Poor Lilian Calmejane very nearly fell short of a fantastic win after cramping up with a few kilometres to go. The 24-year-old had pulled away from the lead group and looked clear until his legs decided they didn’t want to pedal any longer.

And then came Sunday.

What happened on Stage 9?

Sunday was one of the toughest and most technical days of the race so far. With Thomas already out, Richie Porte also suffered a horror crash on the left-hand bend on a daunting descent. He fell, speeding along at 72.5km/h, and slipped across the road, crashing into Dan Martin and into the side of a cliff. David Walsh called it “one of the worst crashes” he’d ever seen on the Tour.

After being carted off in an ambulance, Porte was conscious and alert, but his race was over. As one of the pre-race favourites, the news was all the more galling.

Aside from the horrific crash, there was high drama across the stage. Most notably involving Fabio Aru. Aru went on the attack in the front of the pack when Chris Froome, the current yellow jersey wearer, suffered a mechanical issue. The unspoken “gentleman’s agreement” between riders in the peloton is that you just don’t do this.

The finish pretty much summed up the stage. As riders approached the finish, about four or five riders all bunched together, all trying their best to cross the line first. It looked like Warren Barguil had won. Barguil himself thought he’d won, he was in tears. But a side-by-side review showed that it was actually Rigobert Uran who won. But that’s not all, Uran had serious bike issues and was, according to the experts “basically riding a two-speed bike”.

Louis Meintjes continues to be the most impressive of the South Africans, currently sitting 11th in the overall classification. He remains second in the youth classification. Daryl Impey is in 69th overall while Jaco Venter and Reinhart Janse van Rensburg aren’t in the top 100. Team Dimension Data are having a tough tour – they’re 22nd (last) in the team classifications at the moment.

What can we expect on Stage 10?

Monday is a rest day, well-earned after all those hills. We return to action on Tuesday and it is positively benign after the hellish two days over the weekend. From Perigueux to Bergerac is 178km with one category four climb. There are a few hills, but nothing as steep as we saw over the weekend.

“I guess the organisers got what they wanted. I don’t think anyone wants to takes risks, but it was so slippery out there. Richie just lost it on one corner, locked his back wheel and there was nowhere to go. I was lucky to come away with what I did.” – Dan Martin was not impressed with the organisers.