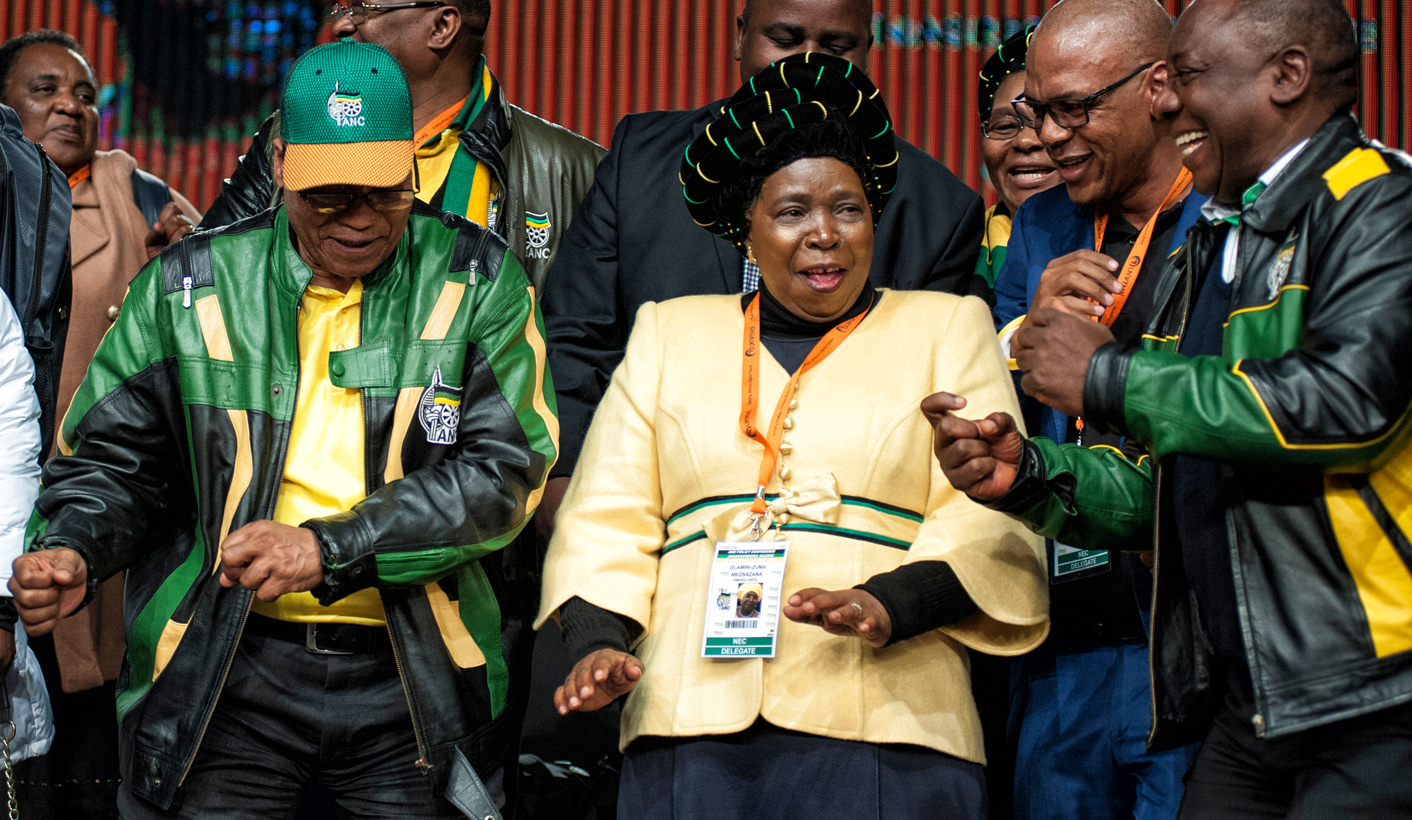 Amid some of the doomsday analysis and scepticism coming out of the marathon just-finished ANC policy conference, some comrades paused just long enough from the singing and campaigning to say there is also cause for optimism. CARIEN DU PLESSIS went out of her way to find some good news.

At almost every big moment in President Jacob Zuma’s life, when he was blessed so to speak, it rained. In fact, when he was elected to the party leadership in 2007 in Polokwane, it bucketed down.

The 2012 Mangaung conference where he was elected was punctuated by a thunderstorm so fierce it seemed like the giant marquee, one of the biggest in South African political history, would blow away.

At the Nasrec conference it was a mixed bag. There was no rain, only a mixture of fair weather and cloud, and quite a bit of Highveld winter cold, but also some warmth. Much like the news. Here is some sunshine:

There was some real debate

The ANC regularly prides itself on being the only party that has a deep and wide debate on policy, and it isn’t wrong. Six days discussing policy might seem a bit steep, but from the very little journalists were allowed to glimpse, the 2,700 to 3,500 delegates (nobody seems quite certain about numbers) attended commissions and were seriously talking about what they want to see in the country. They immersed themselves in policy. Despite the slogans, below much of the discussions lay genuine principle. So far no other party in South Africa, and perhaps very few in the world, displays this level of regular engagement.

The ANC hasn’t been fully captured

This might be a low base to work from, but there was a strong pushback from those who oppose the way the Gupta family has allegedly bought everyone from Zuma to his ministers, staff members and their dogs. Call them the anti-state capturists, because there are even some Zuma supporters who have been captured but are opposed to it, if sources are to be believed.

The growth in support for Deputy President Cyril Ramaphosa – according to sources from both camps there was a marked shift at the conference – could also be attributed, in part, as opposition to the Gupta family, accelerated by the steady trickle of incriminating #GuptaLeaks emails.

The divisions among the top six, and even in the Secretary-General’s office, mean that, if there was cheating on accreditation, it probably happened on both sides of the line in the sand and benefited neither above the other. That’s probably why the conference was so equally divided and why so many compromises had to be struck.

Also, despite differences about everything from who should be the party’s new leader to who should get the land, comrades are for life and delegates were laughing together across the faction divide. Some were even immortalised in social media pictures that show them joking and fake-strangling each other.

While there was a clear divide and a proxy battle on some of the economic issues, like (white) monopoly capital, land redistribution, and radical (socio-)economic transformation, there was a fudging of the faction lines on some policy. The heavy contestation also flung the window wide open for new ideas.

There is nothing like a bit of foreign policy and anti-colonialism to unite the comrades, which meant they could find agreement on the downgrading of South Africa’s embassy in Israel due to the Palestine issue. The dislike in the ANC for the International Criminal Court also united the comrades across factions. They also seem to have a common fear for foreign intelligence agents and forces of regime change, and everyone still agrees that the National Democratic Revolution should be happening – even if they differ on how.

Some have a good gender conscience

The ANC Women’s League might have sold out to patriarchy by getting six men to argue policy positions dispassionately on their behalf, and they might have missed the angle that monopoly capital might have a colour in South Africa, but it has a gender – male – worldwide. But never mind.

Deputy Minister in the Presidency for Planning and Evaluation Buti Manamela, who told a journalist off gently for asking the ANC’s opinion about whether the highly revealing dress worn by Zodwa Wabantu to the Durban July on the same party conference weekend showed that there’s some level of gender consciousness in the party.

Manamela told him the ANC believed women could wear whatever they want, and that still didn’t give men the right to harass them.

The party also has done so well on the gender quota front in leadership that it wasn’t up for discussion. However, more women delegates need to come to conferences, chairperson Baleka Mbete admitted.

One of South Africa’s best policy brains, Joel Netshitenzhe, was actually involved in the drafting of some of the policy resolutions. Netshitenzhe is about as Thabo Mbeki as it gets. He stayed on in the Presidency for a short while after the former president was ousted, and then founded a think tank.

Whether you like his views or not – the ANC Youth League tried to sing him out of the conference at some point – he has serious brains and can only contribute positively to these discussions.

There were a number of other experienced leaders involved in leading the policy discussions, and at some point a young comrade even complained that the veterans were touring from commission to commission to get their point of view across. Not bad.

Also, there was some effort to still talk about the National Development Plan (although the depth of the discussions on it is questionable) and the party shot down the proposal to bring back the death penalty for crimes against women. Social Security Minister David Mahlobo could see this coming for years, saying you need a “solid legal system” to prevent killing the wrong people, and South Africa is clearly not there yet.

Everyone is loving the media

It doesn’t happen often that Zuma thanks the media three times in one day, but on the last day of the conference, as desperation, panic or perhaps just relief set in, he toured some broadcasting studios outside the chicken coop that surrounded the conference area. In his closing speech he also twice thanked journalists – calling them “our friends”. He said: “Indeed, you reported about this conference, this time to a very fair degree, not so? I must thank you very much, may you keep that good culture.”

It’s unusual to hear such effusive praise from him for hacks, but it’s good to bask in some love while we can get it.

There were more than 1,500 journalists at the conference, allegedly, up from the 300 to 400 in previous conferences. There was a prolific variety of publications in the media lounge, which had great working wi-fi, comfortable seats, gas heaters and served three meals a day. The crisis in journalism looked a bit smaller for a few days.

The ANC is now more united than ever and everything will be all right.