The Art of Spin 2.0: Bell Pottinger apology – playing the victim – not accepted 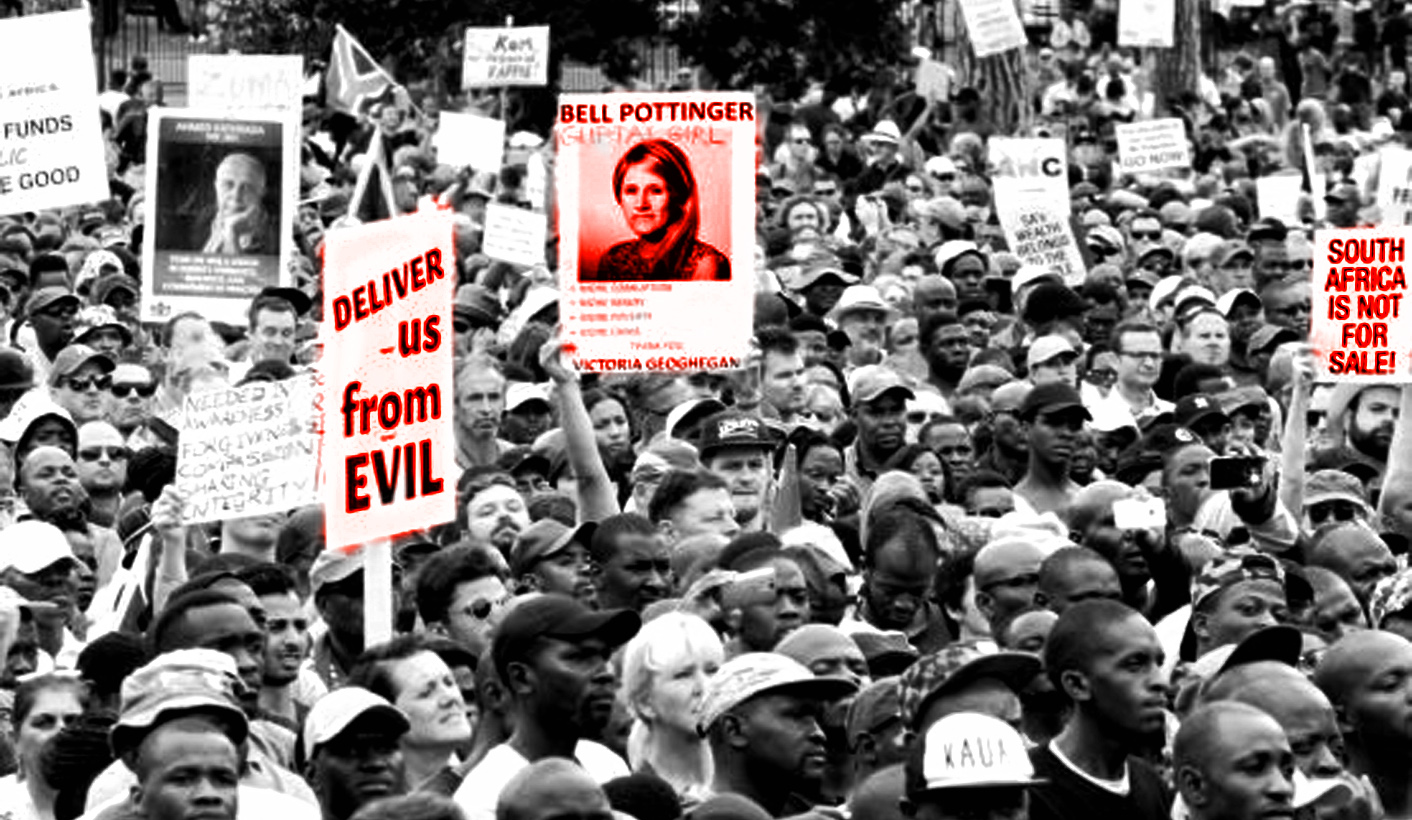 It's the age-old excuse, “We didn’t know.” But that essentially is the thrust of Bell Pottinger’s grovelling apology with regards to its role in stoking racial hatred in South Africa while representing the Gupta family’s Oakbay Investments. The sudden change of heart appears to have been prompted as a result of a steady and relentless fight-back campaign by ordinary South Africans as well as exposure in the #GuptaLeaks email trove of Bell Pottinger’s direct involvement in attempting to deflect attention from the Gupta family’s illegal business dealings. By MARIANNE THAMM.

‘What’s right is right and what’s wrong is wrong. And isn’t this believed by everyone … even among the Persians, and always? … What is fine, no doubt, is everywhere legislated as fine, and what is shameful as shameful; but not the shameful as fine or the fine as shameful.’ – Plato

On Thursday evening, five days before it is due to answer to the Public Relations Communications Association as well as the Chartered Institute of Public Relations, Bell Pottinger’s Chief Executive James Henderson issued an apology to South Africans, an unprecedented move in the dodgy and ruthless global “reputation management” business.

(Go on, pat yourselves on the back, South Africans.)

The surprise apology comes a few days after the Democratic Alliance lodged a complaint with the UK-based industry bodies that Bell Pottinger had acted unethically, manipulated public opinion and fomented racial divisions in South Africa in order to deflect attention from the Gupta family’s nefarious activities.

Bell Pottinger conjured slogans such as #endeconomicapartheid and #growthforall as well as exploiting the notion of “white monopoly capital” to attack individuals – including politicians, businesspeople and media – engaged in exposing corruption linked to Gupta-owned enterprises and the politicians and government officials greasing the wheels for the family.

The firm also colluded with the Gupta family to smear former Deputy Minister of Finance Mcebisi Jonas as well as issuing inflammatory statements and speeches on behalf of the ANC Youth League and MKVA.

“We wish to issue a full, unequivocal and absolute apology to anyone impacted. These activities should never have been undertaken. We are deeply sorry that this happened,” Henderson announced.

That racial divisions were stoked by Bell Pottinger in South Africa, “a country which has become an international beacon of hope for its progress towards racial reconciliation, is a matter of profound regret and in no way reflects the values of Bell Pottinger”, said Henderson.

And while he did not name her specifically, it is clear that Victoria Geoghegan, Bell Pottinger’s Financial and Corporate Partner who worked closely with Gupta family representatives as well as Duduzane Zuma, has been tossed under the bus along with three other Bell Pottinger employees.

Henderson said that while an inquiry by law firm Herbert Smith Freehills was in progress, “we have dismissed the lead partner involved and suspended another partner and two employees so that we can determine their precise role in what took place”.

In her email to Duduzane in January 2016, Geoghegan introduced the Bell Pottinger team as “Jonathan Lehrle, Nick Lambert, Darren Murphy (Tony Blair’s political adviser), and supported by a much wider team. Lord Bell will be available for strategic counsel as and when required. We will also have in reserve other divisions (digital, crisis communications) should we need a wider skill set.”

It would appear from this bold reassurance to Duduzane of Bell Pottinger’s range and capabilities that it is unlikely that the firm’s top management would not have been aware of the work to be undertaken in South Africa.

Geoghegan and her crew, Henderson seems to allege, went rogue, all the while raking in a pretty packet for Bell Pottinger.

“We didn’t know, really”… or rather Henderson’s exact words are “as soon as we were made aware that we had been misled and that work was being done which goes against the very core of our ethical policies, we acted immediately”.

Point is, one person’s “immediately” is another’s “eternity”. Bell Pottinger have been aware for at least a year that the company has been implicated and accused of unethical behaviour in South Africa.

It is no coincidence then perhaps that Bell Pottinger’s definition of “acted immediately” comes in the slipstream of the DA’s complaint as well as calls for a wider inquiry in the UK with regard to the firm’s direct political interference in the affairs of sovereign democracies on the African continent.

Henderson begins the apology by setting out how three months ago, in April, Bell Pottinger announced that it had decided to cut ties with Oakbay Capital after working for the firm for a year. It had been awarded the contract, says Henderson, through a competitive bid.

“When we terminated our work with Oakbay, we said we were doing so because of increasingly strong social media attacks on our staff and our business from South Africa, and that we regarded the criticisms of what our team had done as unfair.”

The attacks continued, he said, and were “clearly the result of strong and sincere anger” and also because of the accusation that the company had stirred up racial division in South Africa.

“However, we have already been shown interim evidence which has dismayed us. Much of what has been alleged about our work is, we believe, not true – but enough of it is to be of deep concern. There has been a social media campaign that highlights the issue of economic emancipation in a way that we, having now seen it, consider to be inappropriate and offensive. At various points throughout the tenure of the Oakbay account, senior management have been misled about what has been done,” admitted Henderson.

He said that Herbert Smith Freehills was in the process of reviewing the Oakbay account and the work done and this would be completed “in the next few weeks” and be made public.

Back in December 2016, Daily Maverick learnt that Bell Pottinger were considering dropping the Oakbay Investments account. At the time we emailed Geoghegan to inquire as to the status of the relationship. We had also been tipped off that Geoghegan had been promoted to Managing Director of Financial and Corporate Practice because of her sterling work on the Oakbay Investments account.

Her reply at the time to us read, “as we have reiterated on a number of occasions – Bell Pottinger represents Oakbay Investments and not its current shareholders – the Gupta family”.

She insisted that Bell Pottinger would continue to handle the Oakbay account and that “any rumour that I am leaving was and is incorrect”.

“Our role has been to correct misperceptions where they exist and communicate Oakbay’s belief that its competitive, disruptive, job-creating philosophy is what South Africa needs if transformation is to be achieved,” Geoghegan wrote.

In November 2016, Peter Bruce, Tiso Blackstar Media’s editor at large (who has subsequently been targeted by Gupta-paid henchman Andile Mngxitama), wrote of how an old player in the shady South African political landscape, Fana Hlongwana, had introduced Geoghegan’s father, Chris, to the Gupta family.

Chis Geoghegan, a former board member of BAE systems and who owns property in South Africa, was the man who introduced Bell Pottinger to the Gupta family. Perhaps this is Bell Pottinger’s definition of an “open tender”.

For many South Africans the apology will ring hollow. Bell Pottinger will forever be implicated and linked to the most serious political crisis facing South Africa’s fragile and youthful democracy.

It is precisely this that has united South Africans in our collective disgust and outrage at Bell Pottinger’s and the Gupta family’s attempts at undermining our hard-won freedoms. Apology not accepted. DM