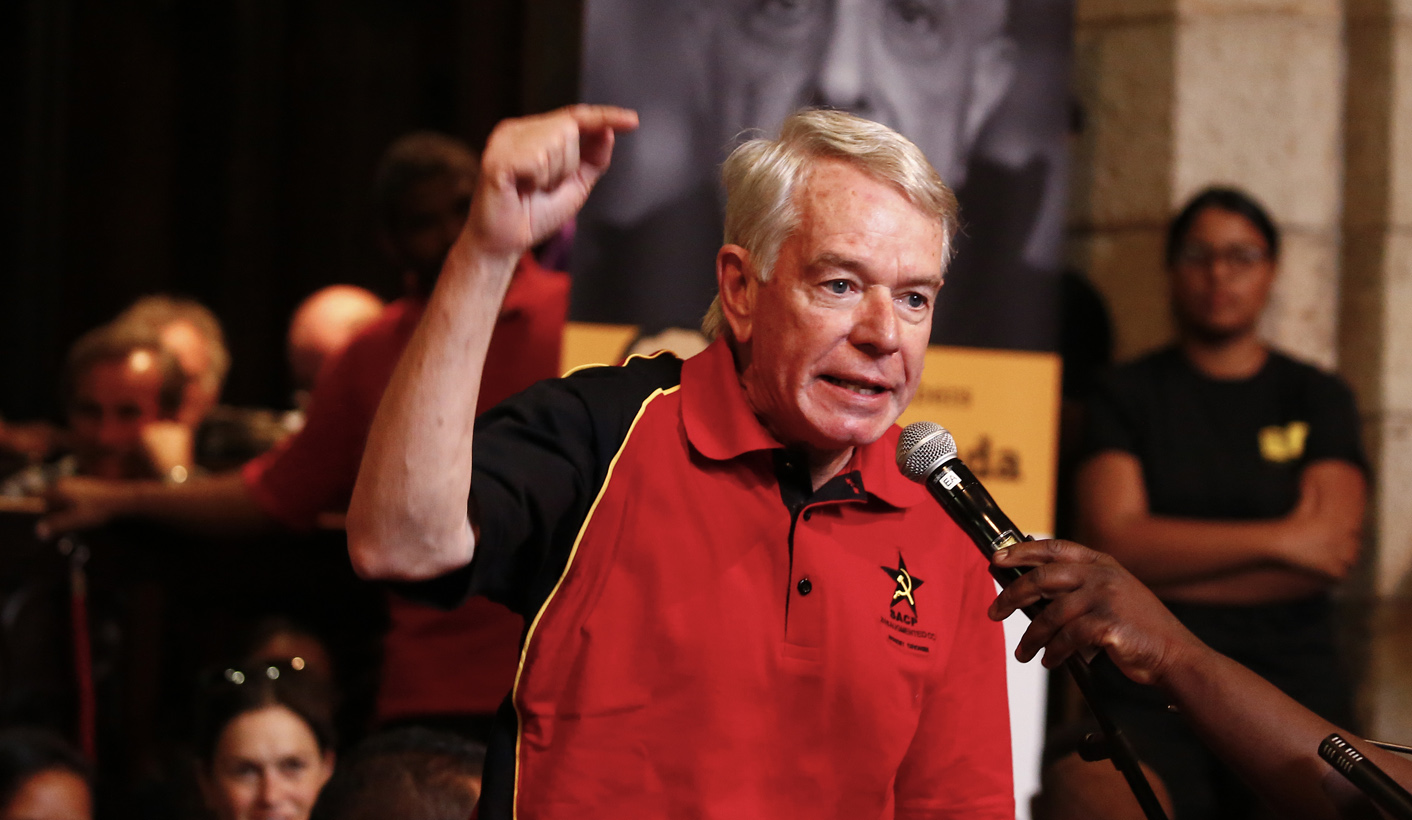 While the ANC was wrapping up its policy conference in Johannesburg, a deputy Cabinet minister was addressing a Cape Town audience on the problem of state capture. Characteristically, Jeremy Cronin did not mince his words, warning that South African democracy is under “dire threat”, and revealing that even his immediate family has expressed bewilderment at his continuing willingness to serve in Cabinet under current circumstances. He also urged a criminal investigation into serving Cabinet ministers implicated through the Gupta emails. By REBECCA DAVIS.

How did we get here?

That was the question that Deputy Public Works Minister and South African Communist Party deputy secretary general Jeremy Cronin undertook to unpack for the Cape Town Press Club on Wednesday.

By “here”, Cronin meant the situation South Africa is facing at this stage of the second Jacob Zuma administration. He described a country where a “very worrying shadow or parallel state” has emerged, with decisions made outside Cabinet or by mysterious government “advisers”. He described an economy which has introduced “a new model of so-called Black Economic Empowerment”, largely entailing milking state-owned entities “massively, parasitically”.

He described a culture of “growing authoritarianism”, and to back up his point quoted from comments made by President Jacob Zuma in July last year, where Zuma said: “If you just give me six months to be a dictator, things will be straight.” And he described a society where “populism and demagoguery is rising to the fore”.

What we are seeing, Cronin suggested, is “a return to PAC politics”, with a “narrow, Africanist agenda” and an anti-intellectual bent.

“The ANC, for the first time that I’m aware of, doesn’t have a theoretical journal,” Cronin said. “There has been a decline and lack of interest in serious intellectual thought.”

But we didn’t get here overnight. The current status quo, Cronin proposed, is the culmination of the last two-and-a-half decades’ worth of local and global political and economic forces.

The macro-economic policies dear to Trevor Manuel’s heart served their purpose initially, Cronin said, sparking economic growth – not spectacular growth along the lines of India and China, but reasonable growth. Even the global financial crisis, beginning in 2007, did not hit South Africa as hard as many other players due to a well-regulated financial sector and the infrastructure investments required for the 2010 World Cup.

“We had very significant public expenditure on infrastructure,” said Cronin. “All the wrong infrastructure… but we were spending money. That was important. That meant that when the commodity prices started to drop we didn’t get as heavily hit as Brazil and Russia.”

Beyond the economic gains, Cronin maintains that the first Zuma administration also made significant social gains. Foremost among them, he suggests, was the “massive and dramatic and important shift from Aids denialism”. The approach taken by Mbeki’s government on Aids, Cronin says, was “genocidal, frankly”.

So when did things start to go so wrong?

“We began to see the signs of state capture, looting of public resources, before 2009,” Cronin said. The Arms Deal he cites as “the beginning of the loss of innocence”, and he describes the subsequent Seriti Commission as a “whitewash job”.

The Guptas were in residence in South Africa long before Jacob Zuma became president, Cronin pointed out. “Before the Guptas rose to prominence, there were the Brett Kebbles, Agliottis, and so on.” There was also the beginning of the “perversion of critical aspects of the criminal justice system”, particularly in regard to the corruption case against Jacob Zuma.

The ANC conference in Polokwane in 2007 which saw Zuma rise to power was a “turning moment”, Cronin suggests. On that occasion, forces from the left wing who felt that the Mbeki regime had not adequately addressed poverty or inequality found bedmates in what Cronin describes as “right wing” forces: Zuma, was bolstered by the ANC Youth League under one Julius Malema. It was this strange marriage of convenience that ensured Zuma’s ascent.

“We apologise,” said Cronin, as he has before, for the SACP’s role in Zuma’s rise.

Later, fielding questions from the audience, Cronin admitted that even his close family has asked him “what the hell” he was still doing in the current Cabinet. He compared his situation to that of former Finance Minister Pravin Gordhan, who could easily have walked away from government but chooses to remain and “play a valuable role” as an ANC figure.

It is important, said Cronin, “that as South Africans we realise the danger that we’re in and unite on at least a minimal programme of defending the Constitution”.

A judicial commission of inquiry into state capture is essential, Cronin believes. But such an inquiry should not replace criminal investigations into those implicated in wrongdoing – such as those who leaked top-secret Cabinet documents to the Guptas, for instance.

“Serving ministers currently appear to be deeply implicated,” said Cronin. “Surely there must be investigation, quickly.”

Beyond that: “Government must immediately cut ties with the Guptas, even if it’s just for narrow electoral ambitions,” Cronin said. “If the ANC thinks it’s going to get more than 50% on the current trajectory, locked in so visibly to the Saxonwold family, they’re dreaming.”

An audience member suggested that one of the quickest ways of making Zuma step down was to vote alongside the opposition in the parliamentary vote of no confidence, scheduled for 8 August. But Cronin said that he doubted the vote will take place at that time.

He predicted that parliamentary Speaker Baleka Mbete would decide against a secret ballot for the vote, as that is “clearly what ANC leadership wants”. Then the opposition will probably take that decision on review, Cronin predicted, delaying the vote.

But if a secret ballot should prevail, and the necessary number of ANC MPs vote with the opposition to unseat Zuma… “What happens the day after?” Cronin asked. In that situation, the Cabinet resigns and Parliament has to vote in a new president.

“Which way will (the dissenting) ANC MPs vote then?” Cronin asked. “Which way will the opposition vote?” He suggested, for instance, that the EFF would be unlikely to support Cyril Ramaphosa as president after their constant criticism of him for his role in the Marikana Massacre.

“We could have a situation in which we are then entangled in a worse constitutional mess,” Cronin warned. DM