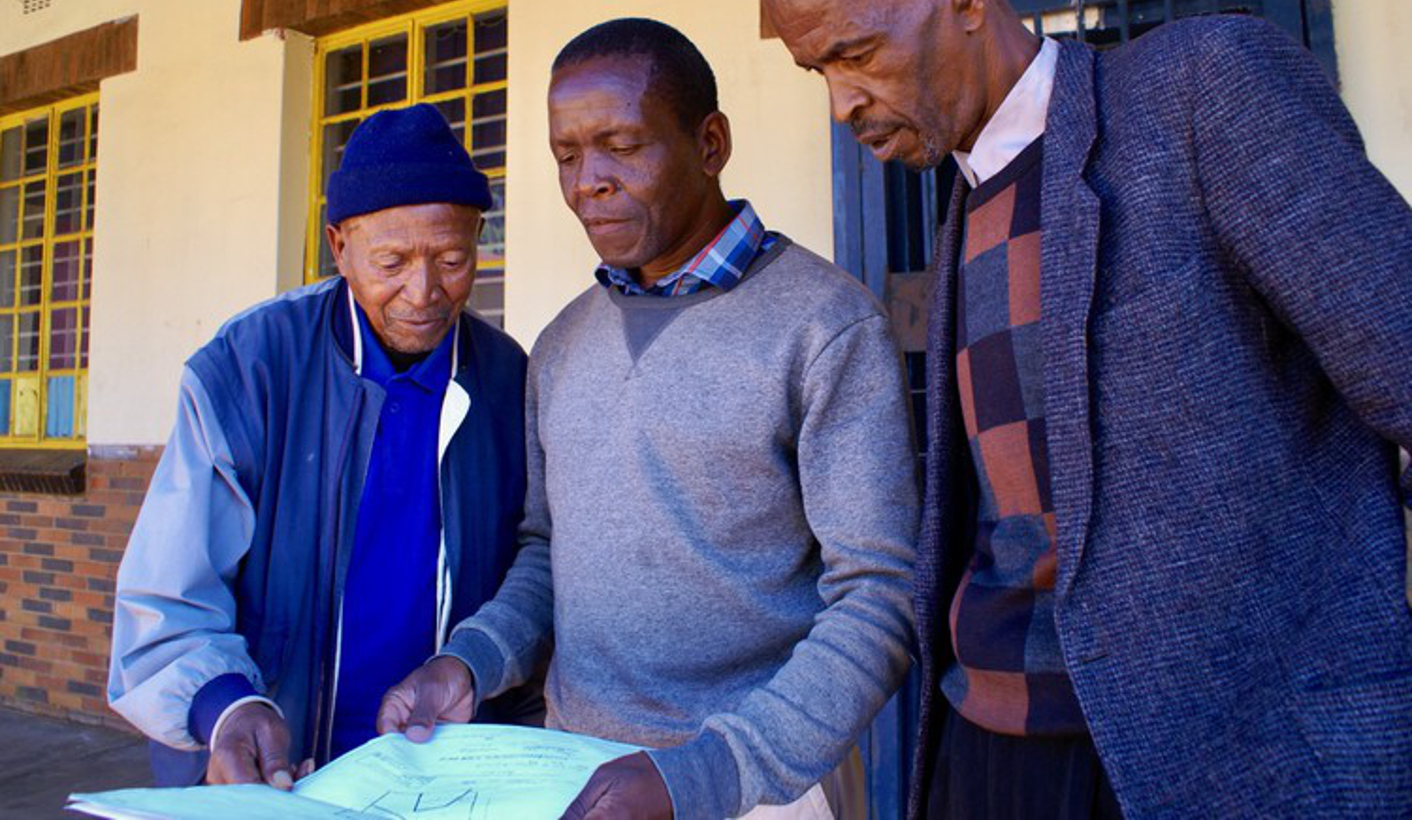 The Evaton community want their trust land restored and mining companies to pay compensation. By Ciaran Ryan for GROUNDUP.

South of Johannesburg near Vereeniging is Evaton. On the surface, there is nothing particularly noteworthy about the area. The roads are pot-holed and neglected; electricity power lines criss-cross the streets; the houses range from fancy to mud brick, much as one finds in neighbouring Orange Farm. But Evaton has an interesting legal claim for land restitution that could run into billions of rands.

“In the apartheid years, the white government attempted to expropriate our land, now it is the ANC government,” says Bulane Lesibo, chairperson of the Evaton Heritage Trust Council.

What sets Evaton apart is that the original farm portions covering 4,628 hectares were purchased by black share croppers more than 100 years ago and placed in trust for the benefit of their descendants. The land extends from Heidelberg in the east to Vereeniging in the south and Welgevoden in the west. But it has been whittled away – in apparent violation of the original trust – by various governments and administrators.

Unlike most places in the country, blacks in Evaton were able to secure freehold titles during apartheid, while in nearby Soweto and surrounding areas black residents had to make do with 30-year and later 99-year leasehold titles.

The community has resisted attempts to channel its claims for land restitution through the Land Claims Court on the grounds that the Evaton Land Trust was established prior to 1913, and therefore falls outside the purview of the Land Restitution Act of 1994.

However, some members of the community did lodge claims with the Land Claims Court and were awarded a combined R48-million for land expropriated.

“The custodian of trust land is the President, and it is he who must restore our rights,” says Michael Mohatle, an elder of the community. A letter to this effect was sent to President Jacob Zuma in June requesting his intercession in the community’s long-running campaign for land restitution.

There are seven deep level gold mines operating on the land, among the world’s biggest, including Gold Fields’ South Deep. Iscor’s plant (now Arcelor Mittal) was built on the community’s land.

In many ways, the claims of the Evaton community resemble that of the Bafokeng, who purchased the land they currently occupy in North-West province with the earnings repatriated from the young men sent off to work in the diamond fields of Kimberley in the late 1800s. This land, too, was placed in trust.

But noting the Bafokeng’s years-long dispute with Impala Platinum in the North West Province over royalty payments, the Evaton community has chosen compensation.

This a not simply a case of black-owned land being expropriated by white rulers. Lesibo says the process of expropriation has continued under the ANC government. Townships have been proclaimed in Evaton in the last 20 years in apparent violation of the terms of the trust, and houses sold under sectional title deeds, while other plots were leased by the local council to businesses.

“The local council leases our land to businesses and collects the rent. We get nothing,” says Lesibo. “We also want to know what has happened to all the trust’s assets, such as tractors, farm implements, the silo and abattoir. These have just disappeared.”

A search of the title deeds of Evaton land sold in recent years shows something peculiar – the land continues to appear under the names of the previous owners and beneficiaries of the trust. For Lesibo and other community members, this is proof that the Evaton Land Trust does not allow for the sale of land. The fact that the deeds office has failed to effect transfer of the land seems to confirm this.

By all accounts, Evaton was once a prosperous and self-reliant community. In its heyday, it had schools, farms, a maize silo, an abattoir, roads and a community bank, all funded from community resources. Not a cent came from government.

In the 1930s, the then Land Commissioner started leasing land to white farmers in defiance of the terms of the trust.

But it seems the most serious breaches of the trust have occurred in the last 20 years, with the local council leasing land without consulting the community.

One problem is that the original title deed cannot be located. There is one title deed for a small portion which has some interesting conditions: only blacks are allowed to benefit from the land, and deed confers ownership both surface and underground rights to the owners.

By extension, this forms the basis of the community’s claim against the seven gold mining companies operating on the original trust land, notwithstanding the current law which vests all mineral rights with the state.

The community held meetings with mining companies in the area to press their claim for compensation, but these meetings went nowhere.

“Gold Fields did meet with a representative of the community in March 2016, but there have been no follow-up meetings since,” says Sven Lunsche, vice-president of corporate affairs at Gold Fields.

Sibanye Gold spokesperson James Wellsted says the company has no recollection of any meeting with the community over its claims.

A mining executive, who did not wish to be quoted, said it is not uncommon for mining houses to be subjected to land claims, though under the new minerals legislation, government is responsible for issuing licences. Any resolution of the community’s claim is therefore likely to involve multiple parties.

“Most of the evidence we have is orally derived from our grandparents,” says Sipiwe Tshabalala, administrator of the Evaton Heritage Trust Council (EHTC). “But we do have other evidence that supports our claim to being a trust.”

Standards of evidence in land claims differ from those in normal civil matters due to the often limited documentary evidence available for land claims extending back nearly 100 years.

The Evaton community clearly have a bitter fight ahead to prove its claims. The community are now mobilising to have their land rights recognised. A court challenge seems inevitable. Even if they win, it will be very difficult to restore to the community title to the land.

The old Community Bank building in Evaton, started with community funds. Institutions like this produced one of the most prosperous black-owned and run communities in the country before apartheid. Photo: Ciaran Ryan

The land was declared a Native Reserve in 1896 by the ruling British authority in the Transvaal. Many blacks fought alongside the British in the Boer War and were promised land for their efforts. A “native reserve” was established in 1904, allocating land exclusively for purchase by blacks. Evaton was included in this.

The Natives Land Act came into being in 1913, formalising many of the post-Boer War land arrangements agreed at the Treaty of Vereeniging in 1902. Only 7% of the arable land of South Africa was allocated to blacks under this act.

The area was registered as a trust under the Native Development Trust Land Act of 1936. Even the apartheid government recognised the unique character of the area, instructing the local authority to desist from interfering in the Evaton community’s efforts to develop the land as it saw fit.

In 1961, the government gazette declared the area a Bantu Trust to be administered by the Department of Bantu Administration and Development.

In 1967, when the local government attempted to rezone portions of the Trust land, the community had it stopped by taking the case to the Supreme Court in Bloemfontein.

The Land Restitution Act was passed in 1994, allowing for indigenous communities to claim land taken after 1913. DM

Photo: Evaton community leaders from left to right: Michael Mohatle, Bulane Lesibo and Sipiwe Tshabalala, reviewing a map of the land they say has been stolen from the community. Photo: Ciaran Ryan