Tour de France for Dummies: Quite a Saga(n) on Day 4 as he elbows Cavendish. Oh, and Benoni sort of showed up. 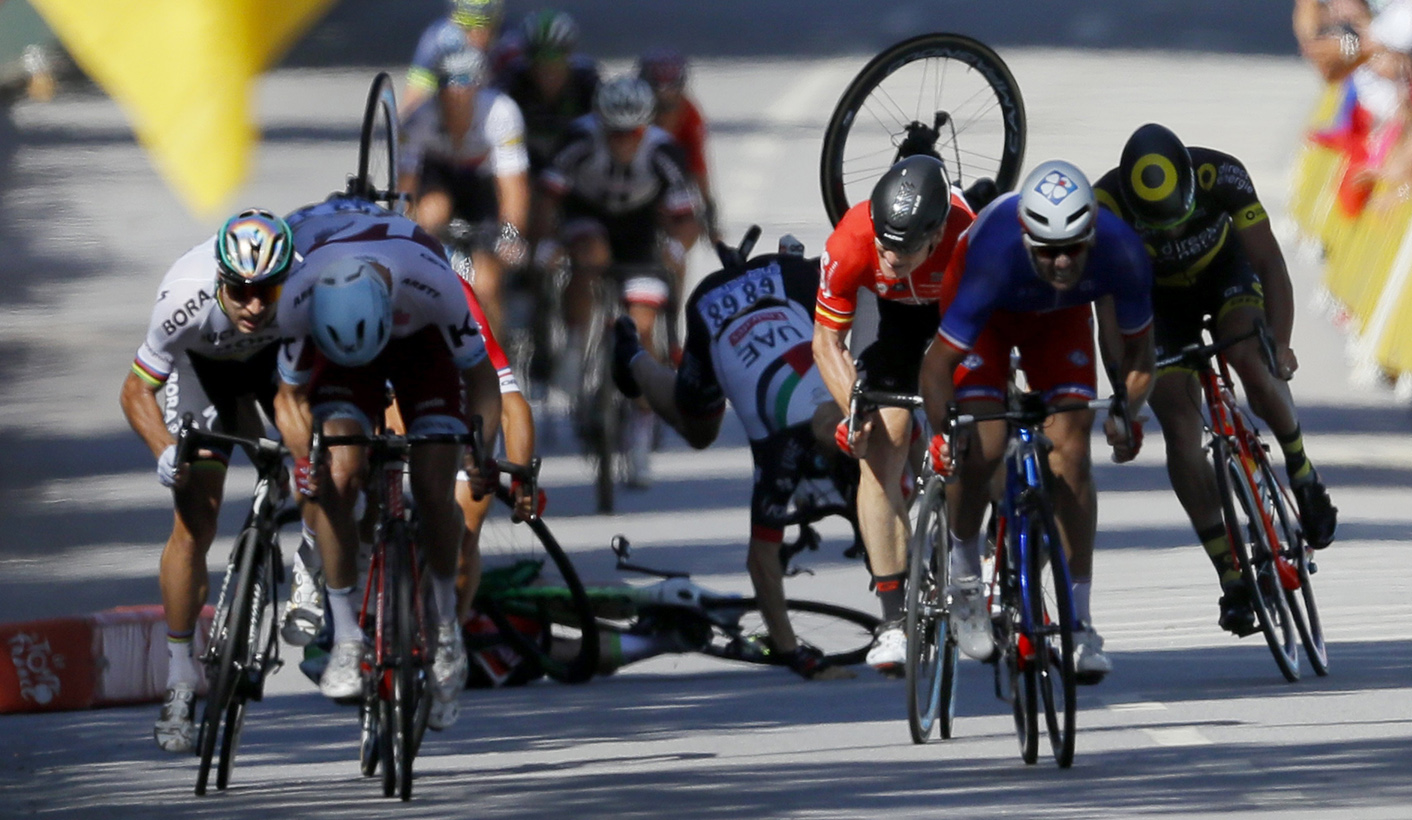 We finally got our wish. Guillaume Keirsbulck thought to hell with it all and sprinted out in front of the peloton to take a lonely, lonely lead basically right from the start. At one stage, he was a whole 13 minutes ahead.

Not deterred by his poor life decisions, Van Keirsbulck continued on his merry, lonely way, desperately trying to keep his massive lead, but the peloton wasn’t having any of it. The gap continued to close.

But, we did learn something. Benoni is not just a little place on the East Rand. Turns out, there are people called Benoni. Oh, if only they knew. According to the official Le Tour website: “Guillaume Keirsbulck is the grandson of Benoni Beheyt, the 1963 world champion who rode for himself instead of leading out his leader Rik van Looy and won stage 22 in the 1964 Tour de France in Versailles but had a short career as he quit at the age of 26.”

Every day is a school day, huh?

What happened on Stage 4?

Well, even if you aren’t into cycling, the sprint finish of Stage 4 was fantastically thrilling. It had everything. Furious gesticulating, epic sprints, Dimension Data pushing it right to the end, a crash and even a sneaky elbow.

Let’s start with our lone ranger. For all of Van Keirsbulck’s efforts to ride the 200-plus like it was the longest time trial of his life, the peloton eventually caught up at the 16km mark. Yes, this is a marathon after all. What followed, though, would mean that the poor lonely bugger’s efforts are completely forgotten.

The final few were pretty flat and the peloton went balls to the wall (or is that leather?) for the final stretch. It was tight as sardines in a vacuum pack, which might be what it feels like to squeeze into Team Sky’s vortex suit.

Dimension Data, riding for Qhubeka, muscled their way to the front of the group, slipping out from the slipstream at around 6km to go all in support of Mark “I won’t win a stage” Cavendish. With things tight and messy, Astana’s lieutenant started to gesticulate like about being squeezed out of position.

With the finish line approaching, there was a crash at the back of the peloton, but it didn’t matter to Dimension Data. What did matter the bump and grind (read: elbow). Peter Sagan muscled into Mark Cavendish, which crashed him into the barriers and saw the poor bloke get run over with under two to go. Some armchair critics claimed that it was actually a knock-on effect of somebody else shoving Sagan, but Sagan is who we clearly see lifting an elbow, so Sagan is the villain for today.

And hey, we gotta give credit to Cavendish here. What on earth he was doing thinking he could worm himself through that gap, nobody knows. But that’s Cav, fearless as a Jack Russell.

Sagan headed over to the team bus to try and say sorry. Cavendish was already out of sight, though, but Team Dimension Data sporting director Roger Hammond did have some advice, saying: “If I was Peter Sagan, I would also go and .”

Have a look at the incident for yourself.

And while all of that was going on, Arnaud Démare sprinted to victory. It was kind of fantastic.

The day ended with Cavendish leaving the team bus with a heavily bandaged hand and an arm in a sling as he headed off for X-rays. He later confirmed his exit from the race with a broken shoulder blade, not good news for Team Dimension Data.

For his role in the Saga(n), Peter was disqualified from the Tour de France. And there we were thinking he doesn’t know pressure.

Reinhardt Janse van Rensburg came in at 55th, Louis Meintjes at 79th, Daryl Impey the best of the lot at 38th and Jaco Venter at the back in 180th. Team Dimension Data finished the stage in 12th spot and Meintjes was 12th in the young rider classification – he’s sitting at seventh overall.

What can we expect on Wednesday?

Stage 5 is one of the shorter stages on the tour. The teams are cycling from Vittel to La Planche des Belles Filles for a grand distance of 160.5km. It’s a little bit hilly, but just one category three climb. However, the climb will be demanding, not just because it comes late in the stage, but also because they’ve been at it for a few days now.

“A bit pissed by the attitude of Sagan, making some moves he shouldn’t make. Yesterday was the same thing in the intermediate sprint (referring to stage 3). (Ande) Greipel told me, ‘Sagan is not my friend ’.” – Marc Sergeant, manager at Lotto Soudal.

Still Welshman Thomas Geraint. Still with Chris Froome on his heels. Michael Matthews is in the mix, too, as is Team Dimension Data’s Edvald Boasson Hagen. DM