Op-Ed: Africa must assert itself in the remaking of the world order 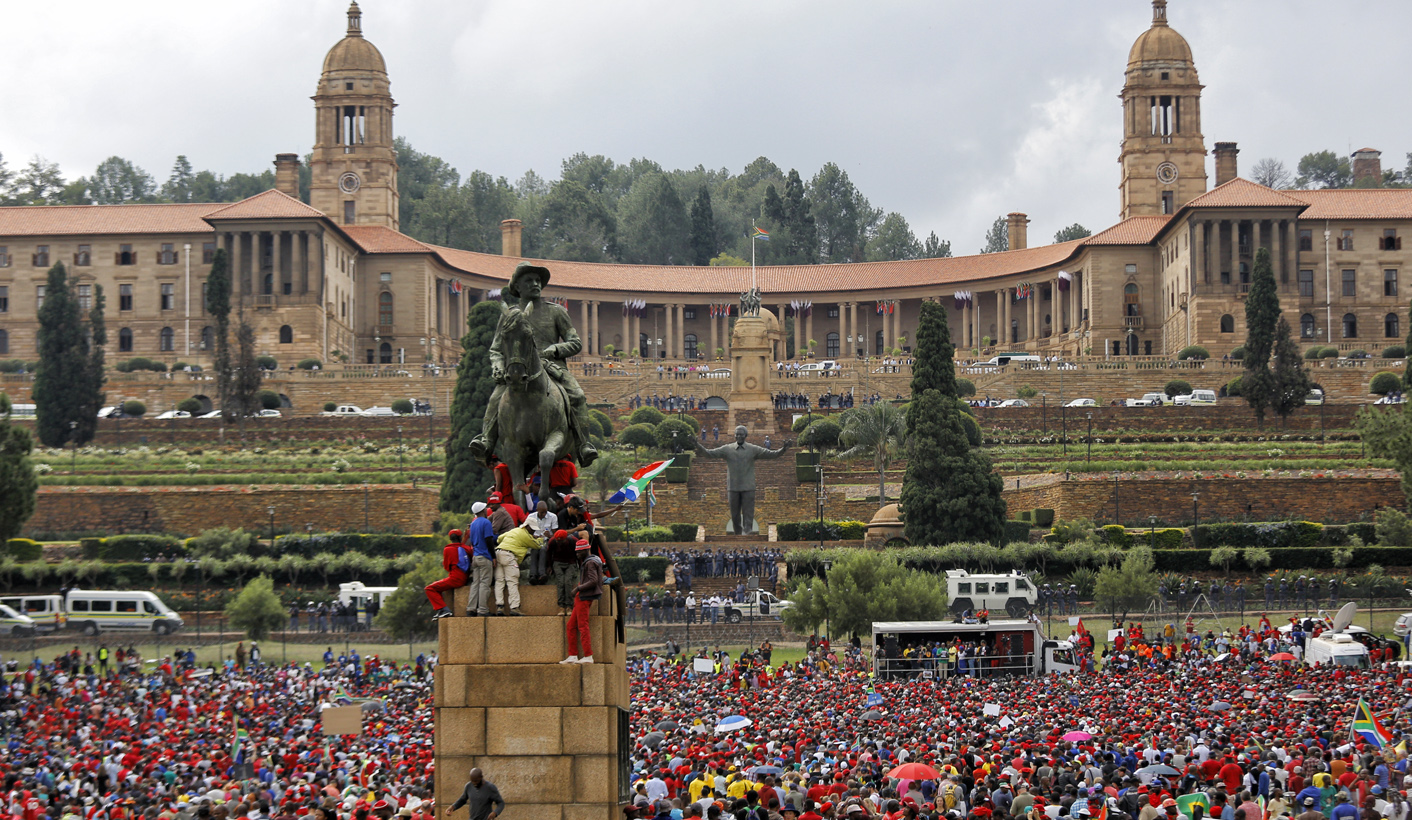 The chaos that is now engulfing the world has a very Western origin. It would therefore be self-defeating for the rest of humanity to permit the self-same authors of chaos to frame the contours of a new global order. It is now time for the rest of the world to assert its right to remake the next international order. By TIM MURITHI and ASHANTI KUNENE.

The liberal international order is in disarray and there is uncertainty as to what will replace it, which is a condition that will persist for a number of years, if not a decade. Some analysts have already cast their eyes eastwards to China and Russia. It would be foolhardy to replace one increasingly illiberal world order with another dominated by China and Russia, neither of which are doyens of principles of human freedom and the rule of law in terms of their own internal domestic situations. To prevent the perpetuation of global instability, it is incumbent on other regions of the world, including Africa, Latin America and SouthEast Asia, to also offer their vision of how to remake the global order.

The so-called “liberal international order”, ideologically infused with Western eurocentric norms, betrayed its much vaunted historic mission by pursuing liberalism at home while undermining it abroad. The West digressed in its primary self-ascribed mission of upholding the rule of law, by historically negating human freedom and covertly undermining the rights of citizens to select their own rulers. At the height of the Cold War both the Soviet-dominated eastern sphere of influence and US-dominated Western sphere were actively involved in subverting human freedom wherever and whenever it suited their agendas. For example, in the 1970s and 1980s, the West colluded with the white supremacist apartheid South African state, and it also covertly subverted the democratically elected leader of Chile, Salvador Allende, in the Democratic Republic of the Congo (DRC) through covert US and Belgian operations that contributed to the assassination of the first democratically elected prime minister of the country, Patrice Lumumba.

The collapse of the Soviet Union unleashed an era of unbridled Western triumphalism which was the basis of a continued arrogant superior posture towards the majority of the rest of the world. The West laid the foundations for the chaos that is now paradoxically coming back to haunt its countries, through its role in planning and executing illegal military invasions in Iraq, in 2003, the bombing of Libya, in 2011, and the ongoing prosecution of wars outside the remit of international law in in Syria and Afghanistan. If there is any need for confirmation, the UN Security Councils’ Permanent Members – USA, UK, Russia and France – have all perpetuated atrocities in Syria despite their justifications, which is the most definitive evidence of the precipitous disintegration of the international system as we know it and the concomitant escalation of global insecurity.

Clearly, the chaos that is now engulfing the world has a very Western origin. It would therefore be self-defeating for the rest of humanity to permit the self-same authors of chaos to frame the contours of a new global order. It is now time for the rest of the world to assert its right to remake the next international order. There should be no assumption that the dominant players in the world today will “invite” other players to join them in remoulding the geopolitical landscape of the planet. The prevalent thinking among the powerful global actors is one of venal self-interest and self-preservation. This kind of thinking unnecessarily raises the stakes and creates an artificial zero-sum game in international affairs. It is precisely this erroneous thinking that has brought humanity to its calamitous tipping point of self-destruction.

The tacit endorsement and perpetuation of this flawed and ideologically infused political realism is a recipe for global catastrophe. In this era of an incipient environmental catastrophe, the precipitous increase of violent extremism, the underlying threat of nuclear Armaggedon, and the persistence of divisive economic models that increase the gap between the haves and the have-nots, the world needs visionary thinking and not a recycling of the same failed historical postures. While the ideals of justice, equality, dignity and solidarity are as old as human societies, our ability to animate them within our global and national institutions remains a constant and painstaking process. The difficulty of achieving these principles in our international relations is not an excuse for not pursuing the endeavour of remaking the world in a manner that is more likely to enhance our chances for overall survival.

The current pathway of increased competition, identity politics and the rise of right-wing facism, notably across Europe and in the US, will only exacerbate an already chaotic geopolitical landscape. The ascendancy of US President Donald Trump and his disregard for the rules and regulations of the international system, most recently dropping “the mother of all bombs” on Syrian people without a UN Security Council Resolution, has opened up a window of opportunity to radically alter and reconfigure the global institutions. Given its current obstructionist posture, the absence of the US from this process due to its inward looking “America First” ideology is more likely to advance rather than hinder the transformation of the global system.

It is in this context that Africa needs to firmly assert itself within the community of nations in the remaking of the world. The parochially minded naysayers may lament on “what good comes out of Africa”, yet they must be ignored with the contempt that they deserve. Africa is a terrain of achievement and of great learning for humanity. The continent did not invite its past and present exploiters to its shores; they came with their nefarious hegemonic agendas. These agents of chaos left behind insidious ideologies that continue to be perpetuated by the few agents, whom they managed to mentally ensnare to do their bidding by perpetuating their flawed political and economic prescriptions.

Africa is an exponent par excellence of a people’s desire to pursue their freedom from colonialism and apartheid. This achievement of pursuing justice, equality, and self-determination through solidarity stands out in human history as an extraordinary achievement worthy of replication in our constant daily battles, including our efforts to remake the world. The struggle for human dignity continues as Africa’s countries and societies strive to function in what are essentially fictitious colonial state constructs that were not of their choosing. Even in this monumental task, there are early indications that the seeds for the re-imagination of Africa’s polities are gaining momentum with the gradual ascendancy of Pan-Africanism, embodied in the ongoing efforts to revitalise the African Union (AU) and intervene in the internal affairs of states.

Africa’s experience with fighting for justice, equality and self-determination through solidarity is the continent’s lesson to the world, and the basis upon which it should assert its right to contribute towards remaking the global order. The principle of equality demands that the United Nations Security Council be permanently dismantled and replaced with a more inclusive platform for decision-making on vital issues of global peace and security, such as a representative supranational council of continental actors. The principle of justice demands that the voices of all of the people of the world are represented in a World Parliament, despite their ideological or religious orientations. The principle of solidarity demands that global challenges facing the environment, economy and societies are addressed through the collective effort of continents, countries, communities and people working in tandem, and not by pursuing self-centred agendas.

A new global order is now under construction. Its self-appointed would-be framers, in the East and West, believe that their economic and military power entitles them to mould it in their own image and to suit their own interests. Africans must now stand with the rest of humanity to put a halt to their illusionary and exclusionary agendas, and contribute towards the remaking of the global order. DM

Professor Tim Murithi is Head of the Justice and Peacebuilding Programme, Institute for Justice and Reconciliation and Extraordinary Professor of African Studies, University of the Free State, and Ashanti Kunene is a Programme Intern, IJR Sustained Dialogues Programme, @_IJR_

Photo: Protesters hold banners as they crowd the lawns of the Union Buildings during a mass protest by all opposition parties in the country calling for President Zuma to step down, Pretoria, South Africa, 12 April 2017. EPA/KIM LUDBROOK