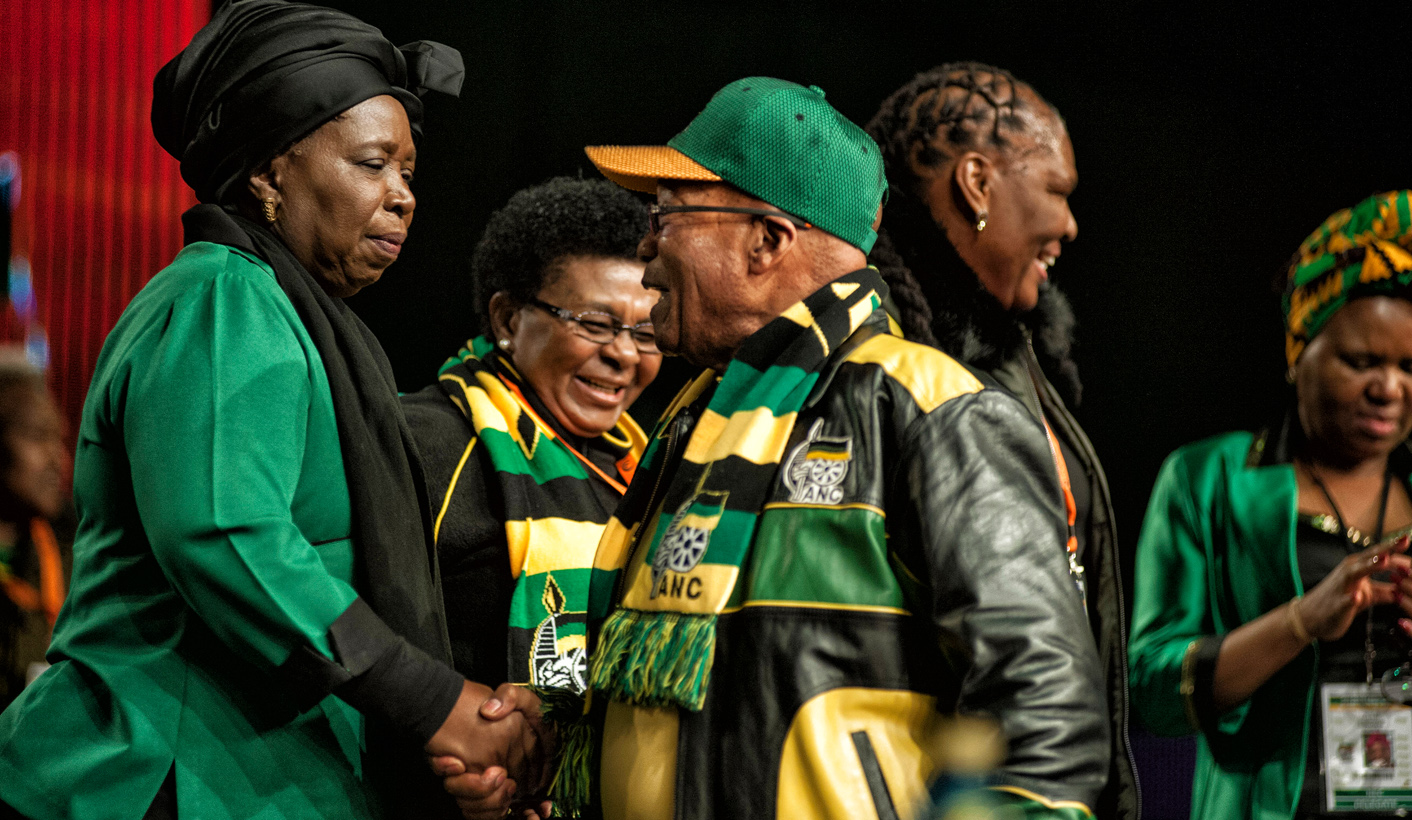 Five. Degrees. Celsius. Or that’s what the car said. It didn’t seem right somehow, leaving that early in the morning, with at least three and a half hours before anything could possibly happen. But such are the demands of journalism, politics, and 21st Century information culture that there was no choice. It was dark and cold; I thought to myself that that would be pretty much be the only time today I would be cold, the politics of the ANC would take care of that. How wrong I was. The temperature of this conference is so cold, so fragile, almost politically frigid (in the most hostile sense of that word) that it almost defies description.

It all works rather well. And it is not what has necessarily happened in the past, when things have been all over the place, and security have demanded that you take the longest possible route to get from place to place for the singular sin of having a media tag around your neck.

The first interview of the day was with the ANC’s head of policy, Jeff Radebe. There was a long bit of hanging around outside the SABC’s make-shift studio here, watching Peter Ndoro interviewing him first on live TV. I kept wanting to push open the door and ask him to hurry up, with the incentive that “this is not a New Age breakfast, Peter!”.

When he eventually came out Radebe was his usual smiling calm self.

Yes, this policy conference is more important than others, he said, because of the situation around the economy, indeed, I won’t be drawn on that distinction between “radical economic transformation” and “inclusive growth” and this is all old language anyway, no, but of course there’s no chance the leadership contest will really overshadow the policy debates…It was that kind of interview.

After that it was time for a brief stroll and a bump-into with Malusi Gigaba. There really is no protocol on how to ask for an interview in the gents, but I made the request and he, correctly I think, demurred. Then back to the media centre (helpfully pointed out by the security guards who’d had quite enough of me by then) and a discussion with Gwede Mantashe.

The man really is more confident even than he was five years ago. It’s incredible really, when you consider what is happening around him. He just gives the impression of being firmly in charge of things. I’m not sure how he does it, because it doesn’t seem no-one is truly in charge of the party, but he does it anyway.

He was his usual combative self when the microphones were on, all about we’ll emerge more unified, but we have to work for it, the economic commission will be the most important because “economics is the heart of politics”. It was all very typical Mantashian. Not necessarily saying anything, mind you, but talking politics nonetheless.

Finally, nine o’clock. It was time for this thing to start. Into the hall I went.

Oh wait, hold on a moment, or two… hours. The hall, massive, green gold and black, was nearly empty. Where the hell was everybody?! People trickled in. There was simply no movement of people. Where were they?!

Eventually, with the hall at around two-thirds full, Zuma arrived. No one bothered to notice.

Just think about that for a second. No one noticed. The music kept playing, the non-vibe carried on, nothing happened. Zuma in a room, arriving. An ANC room. Nothing happened.

This is the complete opposite of every single other time that I have seen him arrive at an ANC gathering (there was one incident when Zwelinzima Vavi’s Cosatu managed to keep a room eerily quiet when he walked in, in around 2011). Normally the ululation lifts the roof, the hall has a roar, a spirit, a thing.

And then finally, the ANC National Chairperson Baleka Mbete got things going. But the hall was still not full.

I was looking for the ANC. Where was it? Because it sure as hell was not in that hall. I am a relative late-comer to the party. I’ve known in its various guises for just over a decade. But still, this is not the ANC I know. There was no feeling, no gees, no presence. Nothing. Just a group of individuals who all happened to be in the same room.

Even the factional songs were muted. It really was an indication of how well the ANC has managed to actually subdue itself. To be fair, it was freezing in that hall. Like really icy. But still, I’ve never seen the ANC like this.

The religious leaders did a good job in trying to warm things up. Instead of the Chief Rabbi there was a person who I think we could safely say was to the “hard left” of Israeli politics. He made the point that our country has more freedom of religion, and more freedom generally than almost everywhere in the Middle East. Including Israel. I don’t know who was behind the idea of sending him to represent the Jewish community, but I hope they have a good Sabbath. They deserved it.

And then Zuma got up to speak. There was some clapping, most of the hall, probably nearly all of it actually, stood, and then what a music producer would call a “struggle generic” popped up for a while. He did the ritual greetings…and then he got to the “Deputy President Cyril Ramaphosa” bit. There was some shouting and a little singing. It looked, to me at any rate, that these were people singing in favour of Ramaphosa.

For various reasons to do with a pesky current affairs programme that simply will not move its time from Mid Day, I had to leave the hall at this point. But, it appears that Zuma’s speech really fell into two halves. There was the formal Zuma reading terribly by rote bit, that seems to have been written by a very large committee. It hit all the right spots, the need for unity, how we need to undo the damage of last year’s local elections, fighting corruption, all that stuff. And then there was the second, unscripted part. In which Zuma was really Zuma, more animated, more lifelike, dare I say it in that hall, warmer.

But this was the part in which he appeared to hit out at the judiciary, and had a real swipe at the ANC stalwarts. He accused them of thinking they knew better than the branches. It was the time-honoured appeal to “the people” and the time honoured populist claim that “the elites” think they are better than them.

Through all of it there was this strange atmosphere. Almost as if everyone in the hall is holding themselves in with the tightest possible discipline. I can’t help but wonder if some sort of truce, perhaps better described as a cease-fire has been agreed to, to stop the ANC from splitting. This coming week, at least. It may be, hard to know as it is, that the two factions have basically agreed to try to stop fighting in this conference. It will be hard for them to manage such position, but it’s probably worth trying.

Throughout history, some cease-fires have turned into longer term truces and then into a long term peace. Sometimes all that’s left of a short cease-fire is the pieces left over when the shooting starts again. It’s hard to imagine that the two sides will be able to actually keep the peace and civility all the way until Wednesday. And if they do, how would they keep it going for longer than that, when the stakes became so high?

It is probably more likely the prospect that the real first prize for everyone in December is actually to win control of a full-sized and fully-functioning ANC that is making everyone remain so disciplined for the moment. But even this is interesting. It tells us that no one is ready to move. And while it may look like Ramaphosa is weak, it is actually a real indication of how Zuma is so much weaker than he was. He’s always been able to move against his enemies, but now, he can’t against Ramaphosa. That is properly fascinating.

After all of this your reporter had some other matters to attend to, wondering around the conference centre, gossiping, meeting, talking to friends who used to work here and now work there (you know who you are, Ms Munusamy…) and any ANC person who would stop to chat. We had been promised a briefing with Mantashe on his internal diagnostic report of the ANC. It was delayed. And delayed. I’m sorry to say that your correspondent was feeling old and tired and hungry and grumpy by this stage.

And so I left. And was incredibly glad to find that the only people waiting for me at home were my family. And not a foreign-funded leader of a party simply too insignificant to name here. DM