Op-Ed: Beyond patronage politics – where is South Africa going with Eskom? 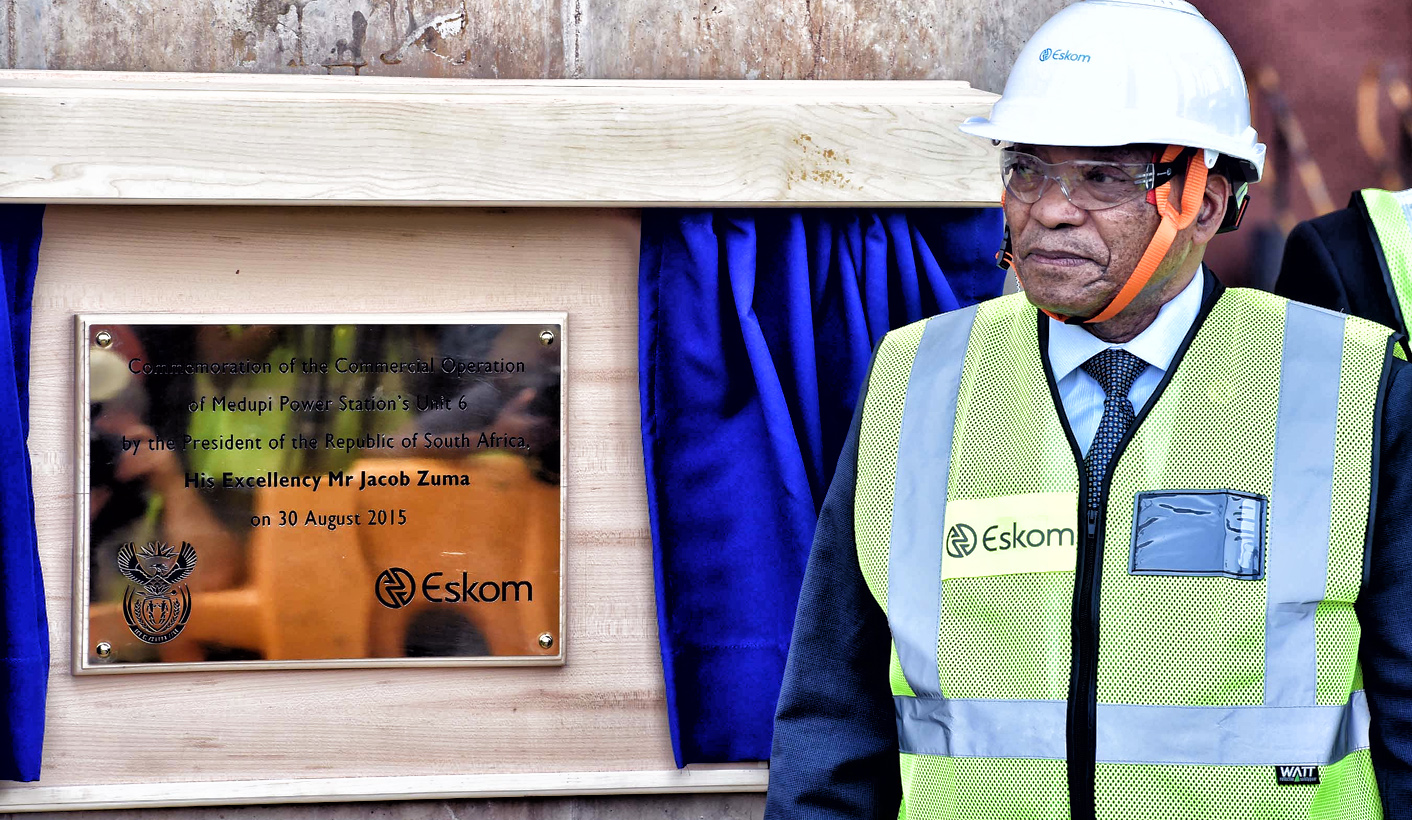 Eskom being constantly in the news for all the wrong reasons is masking a more structural problem – the utility’s financial sustainability as a vertically integrated public utility company in a rapidly changing world. By PIET VAN STADEN.

The seemingly never-ending series of reports and investigations on financial mismanagement at Eskom rightfully trigger a media frenzy. Concerned citizens can only hope that the many investigations and reports will eventually result in prosecutions where needed and that the rule of law will be seen to apply to everyone, irrespective of patronage or political affiliation.

However, Eskom being constantly in the news for all the wrong reasons is masking a more structural problem – Eskom’s financial sustainability as a vertically integrated public utility company in a rapidly changing world. The size of the problem is not well appreciated. The price risk to customers is not understood. And replacing the leadership and some board members will not solve the immediate debt and liquidity challenges staring us in the face.

Globally, the electric utility business is not what it used to be. During the 20th century the classical centralised generation public utility model worked well in an environmentally unconstrained world where economies of scale and technology advances resulted in ever decreasing marginal costs. Lately the opposite applies: The cost of compliance and safety for mega coal and nuclear projects is ever increasing, while distributed generation is becoming cheaper by the year. As a result we are currently commissioning the Medupi and Kusile units after building for more than 10 years at a levelised cost of some 120c/kWh, while a mixture of renewables and gas technologies will be cheaper, cleaner and more flexible and scalable to allow for better agility to match supply and demand. Agility and flexibility will fetch a premium in future power markets. The tried and tested base load generation technologies are at risk of being unable to meet the ramp rates required for balancing renewables or (at worst) be stranded altogether. To make matters worse, in a regulated monopoly such as Eskom, the cost of getting it wrong will be passed down to the customers.

It is becoming clear that the global transformation towards decarbonisation of the electricity grid is unstoppable, and in countries such as South Africa with excellent renewable resources the industry will restructure, either by design or by default. Restructuring by default will happen when the incumbent utility is overtaken by events outside its direct control, such as the proliferation of solar PV eating into its market and changing the load profile. It will be disruptive and painful, hence the call for a well-planned transition towards a lower carbon future in a way and within a time frame that can potentially enhance (and does not erode) the competitiveness of our economy.

Update of IRP is key

The Integrated Resource Plan reflects the policy direction of government and sets out the build plan to take the country to the desired future. It is understood that an updated IRP may be published by the DoE by the first quarter of 2018. It is crucial that we get it right to minimise future price increases and end the current uncertainties around the future of the REIPPPP, nuclear and gas to power.

The Draft Base Case published for public comments during November 2016 is flawed in that it does not reflect the realities on the demand side and can lead to massive over-building (the cost of which will be passed down to customers). It also has caps on the tempo of roll-out of renewables which have no rational base, mitigating against a “least cost, least risk” base case.

For the purposes of this article it is assumed that the updated IRP will reflect a more realistic demand growth outlook. It must factor in the structural changes caused by climate change, energy efficiency improvements and new technologies, as well as softer commodity markets after the commodity super-boom era before the 2008 economic meltdown. These are not South African phenomena, but reflect a global decoupling between GDP growth and electricity demand growth witnessed from about 2009. For South Africa we also need to factor in the more cyclical effect of the recent downgrades and other self-inflicted damage to the economy. To plan for demand growth rates last seen during the commodity super-boom when energy intensive industries expanded rapidly is irrational and will have very negative unintentional outcomes.

It is also assumed that the new IRP will correct the starting point of the demand outlook curve to the actual out there. The demand outlook used in the draft IRP assumed GDP growth rates of about 5% from 2015 onwards, while the reality has been less than 1% last year and even worse projected for 2017. South Africa should plan for a best case future to ensure that electricity constraints do not limit growth again, but tempered by what is within the art of the possible since an over-optimistic outlook followed by over-investment will lead to unaffordable electricity price increases, killing any hope of growth. Such a scenario can trigger a death spiral where price increases and demand destruction or grid defection feed on each other in a vicious downward spiral.

Correcting the demand outlook will show that with the bulk of Medupi and Kusile still to be commissioned, we are entering a period of over-capacity, affording us the time to plan for a managed transition to a least-cost generation industry with predominantly private sector investment. Such a reality check will also show that the current debates about nuclear and Eskom not signing PPAs are costly distractions. You do not sign PPAs if you are not going to need the additional power. The whole idea with the IRP is to roughly balance supply and demand. And if we really want nuclear, but will only need it post 2040, we may want to spend our time now on the more urgent matters at hand, such as how to manage our electricity industry over the mountain of debt facing Eskom while electricity sales are flat to declining.

Where are the customers’ yachts?

The humorous and entertaining book by Fred Schwed Jr about Wall Street has a ring of truth for South African electricity users, especially large power users who are paying above cost for electricity to subsidise small users. Members of the Energy Intensive User Group consume about 40% of the electricity generated in South Africa, yet it appears that the debate on the supply side assumes that the customer will always be there to buy the electricity on offer. And if the customers do not buy enough we will approach Nersa with a Regulatory Clearing Account application to recover the lost revenue via an extraordinary price increase.

Such an approach is a certain recipe for disaster in a fast-changing world where customers have options. Large power users can either become more self-sufficient by installing co-generation, or relocate to lower-cost environments. There are already smelters in OECD countries targeting high wind periods for their production runs when surplus power on the grid forces prices down. Who would have thought five years ago that European smelters would undercut South African smelters on electricity cost? Commercial customers and middle-class residential customers can install rooftop PV, which will not only eat into utility sales, but also change the national load profile. This will leave the utilities with reduced sales, less subsidisers in their customer mixes, and growing numbers of those who are subsidised.

It appears that a perfect financial storm is building up for Eskom. It still has to borrow heavily to complete the build programme, while some loans are coming up for refinancing. Its projected interest cover ratio over the coming years should illustrate the gravity of the situation. Further support from the fiscus (which will dwarf any requests for help from SAA or the SABC) also seems unlikely and unaffordable. If the taxpayer cannot pay, the ratepayer will have to.

Navigating ourselves towards a more sustainable electricity future

The Energy Intensive User Group is of the view that all is not lost, but that out-of-the-box thinking is required and some holy cows will have to be slaughtered if we want to prevent de-industrialisation and find the middle ground between sustainability of Eskom and affordability of electricity. Business as usual will not do it, and it may be a good idea to use the existing MACE or set up a special industry think tank to come up with proposals for the minister’s consideration.

Over the short term, more cost-reflective pricing for large power users (LPUs) will help to sustain current sales, as well as generation displacement agreements where non-utility generation can be curtailed if it makes sense. In all such cases the LPU prices should be above Eskom’s marginal costs, to ensure the additional electricity sales still contribute to fixed costs.

For a long-term solution we will have to look at the industry structure, Eskom’s business model and the Electricity Pricing Policy. The current rate-of-return regulatory methodology talks to a previous era where utility companies were seen as low risk/low return businesses, entitled to recover prudently incurred costs and earn a fair return on assets. However, if the future belongs to distributed energy resources and some gas fired IPPs the question becomes how to optimally manage the de-carbonisation journey, and not how to ensure Eskom’s generation fleet stays on as a sustainable business ad infinitum. The optimum way forward may be to separate the Transmission and Market businesses and ensure it is managed sustainably, while the existing Eskom generation business should be exposed to competition and managed as efficiently as possible to end of life over the next few decades. It may also be decided to maintain some momentum in the renewables build-out programme by pre-investing until new capacity is really needed, as long as it is part of an agreed national plan and the cost of renewables displacing cheaper Eskom generation is manageable.

The very first step to a sustainable electricity future must be to address the alleged financial mismanagement and corruption, while concurrently finalising a new build plan to inform our country vision on the way forward. It is hoped that the Minister of Energy will end the current uncertainties by coming out with a clear statement that the need and timing of future generation investments (be it renewables or nuclear) will be informed by the updated IRP, once the study has been completed and public consultation has been considered.

Then it must be down to business on de-carbonising the grid via a managed transition, without breaking it. DM

Piet van Staden is a senior energy executive at Sasol. The Energy Intensive User Group (EIUG) of Southern Africa is an industry association representing large mining and industrial electricity users in the region. Its members use approximately 40% of the electricity generated in South Africa.

This article was published by EE Publishers and is republished with permission.