SS Mendi: Dialogues with the drowned 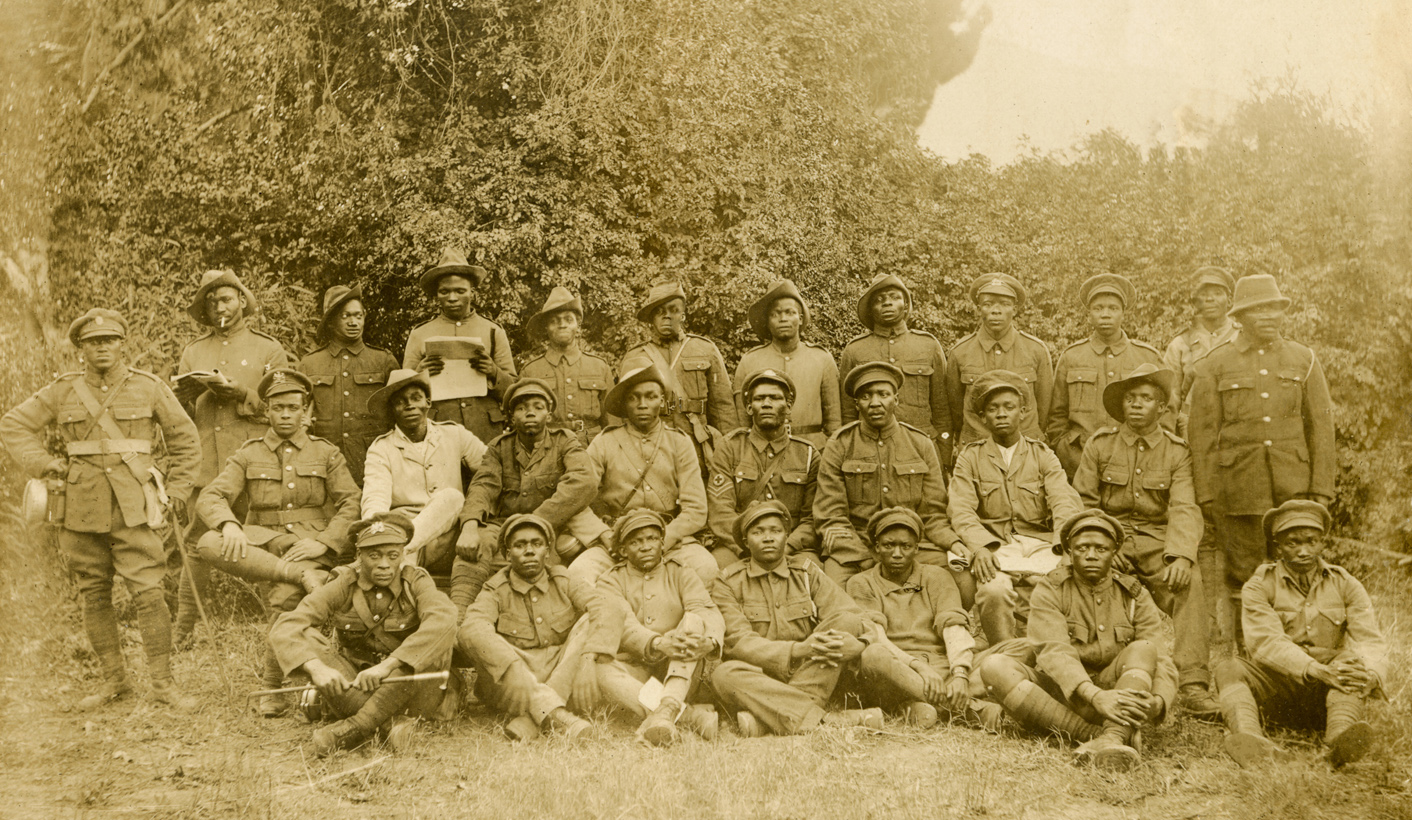 One hundred years after the sinking of the SS Mendi on a foggy night at the height of World War I, the spirits of the dead will be honoured in a multimedia live installation to be staged in a venue surrounded by trees, writes ALEX DODD.

There is a condition known all too well by those mad officers of conscience who work in the field of archives, libraries, bone throwing, memorialisation and the recovery of lost memories. It’s heady territory, but you feel it physically – in your veins, your sweat glands and in the accelerated rhythms of your beating heart. French philosopher Jacques Derrida diagnosed it as “Archive Fever” and I could distinctly feel its heat travelling across the trans-Atlantic ether on a recent WhatsApp call to multi-award-winning writer, director, teacher, curator and artist Mandla Mbothwe in New York City.

No matter that it’s 06:00 East Coast time, the conversation fires up quickly and passes in a spell-like fervour, with Mbothwe speaking freely off the cuff as if he’s channelling an internal script. “We arrived in New York late yesterday afternoon and hit the two-hour gridlock of rush-hour traffic,” he says. But before he’d even had time to unpack, he was heading downtown to experience the 9/11 Memorial & Museum first-hand. “I found it more factual than artistic, but so intense,” he says. “This is the stuff that interests me – the work of remembrance, excavating stories, performing archives. How do we put these things into the world?”

Mbothwe has been on a 22-person tour of Washington DC, San Francisco, Cleveland and New York as one of five African participants in the US State Department’s IVLP (International Visitor Leadership Programme) exchange programme, visiting museums, galleries and public art spaces, and meeting fellow artistic directors.

“I’ve been struck by how they take care of memory and history in public spaces here in the US,” he says, speaking of his experiences of the new ship-shaped David Adjaye-designed Museum of African American History and the Martin Luther King Jr Memorial – and how prominent and well-integrated into Washington’s National Mall and Memorial Parks they are. “It’s quite mind-blowing,” he says. “There’s no tick-the-box attitude at work here. They are integrated, well-thought out and well-balanced aspects of the precinct.”

But it is when he starts to speak about the role of water in memorialisation that I realise we’ve entered Mendi territory. Sabamnye no Mendi (I became one with Mendi), the production Mbothwe is staging at this year’s National Arts Festival in Grahamstown, is all about the real and metaphysical power of water – water as sustenance, physical force and metaphor. “I’m struck by the Americans’ use of water in all of their memorials. Concrete is not enough – concrete is the tombstone, but for it to be made alive, you need the sight, sound and smell of water. This is what we need to learn at home. As Africans, we should know this the best – understand the elements and what they cause in the body.

“The water that took those men away is the same water that was used to deliver slaves from point to point, and in that same water we seek healing. These are some of the contradictions of what water carries in black narratives. Those men disappeared and were never buried by their families. Chiefs and warriors went off to that war they call ‘the Great War’. Clan names and families were discontinued – stopped just like that,” he says.

When Mbothwe speaks of “these men who were swallowed”, he is talking of more than 600 black southern African men who signed up to fight in World War I as part of the Native Labour Corps, not knowing that they would lose their lives in one of South Africa’s greatest military disasters. “Remember that this was just four years after the implementation of the Natives Land Act in 1913 and people were desperate,” he says. “People’s livelihoods had been radically disrupted – their masculinity too – and they needed work, so they swallowed the conscription publicity and went off to war.”

At 05:00 on 21 February 1917, in thick fog about 19km south of the Isle of Wight in the English Channel, the cargo ship Darro accidentally rammed the British troopship Mendi’s starboard quarter, breaching her forward hold. Some men were killed outright; others were trapped below deck. Many others gathered on deck as the Mendi listed and sank, killing 646 people in about 20 minutes.

An interpreter, Isaac Williams Wauchope, who had previously served as a minister, is said to have calmed the panicked men when he raised up his arms and cried out: “Be quiet and calm, my countrymen. What is happening now is what you came to do… you are going to die, but that is what you came to do. Brothers, we are drilling the death drill. I, a Xhosa, say you are my brothers… Swazis, Pondos, Basotho… so let us die like brothers. We are the sons of Africa. Raise your war-cries, brothers, for though they made us leave our assegais in the kraal, our voices are left with our bodies.”

Mbothwe first encountered this epic loss through the writings of Xhosa poet and historian SEK Mqhayi, most celebrated today for his authorship of the poem, Nkosi Sikelel’ iAfrica, now core to South Africa’s national anthem.

It was in 2011, as Artistic Director of the Steve Biko Foundation, that Mbothwe staged his first production to surface the history of the drowned and give it new breath.

“What was most moving about that initial production is that we got to stage it in the Community Hall in Ginsberg where Steve Biko grew up and was buried,” he says.

This poignancy was added to by the fact that most of the men who died in 1917 hailed from the Eastern Cape, and some of the cast members performing the production hailed from New Brighton in Port Elizabeth.

After years of research that has reached deep into communities and involved dialogues with researchers at the University of Fort Hare and elsewhere, Mbothwe has assembled a stellar group of contemporary artists – including talents like Chuma Sopotela, Koleka Putuma, Owen Manamela Mogane, Lulamile Bongo, Buhlebezwe Siwani and Thando Doni – working across film, dance and music to stage this multimedia incantation in the centenary year of the sinking of the Mendi.

“We’ve relied on a range of resources, combining imagination and knowledge, to find meaning,” says Mbothwe. “We needed to find variations and forms to express the fragmentation of memories that live in our bodies.

“We are all in a state of trying to remember,” he continues. “If the body heals, but the spirit doesn’t, you’ve got a problem… And when it comes to intergenerational traumas that involve the loss of identity and memory, it is only art that can help us to excavate lost aspects of history and go beyond the literal, beyond facts. Those men that were swallowed, we do not remember their names. Like it or not, we remember ‘Mendi’ in the singular. They have become Mendi. So too, Mendi is becoming us. We are Mendi  – we are the commemoration of that memory.” DM

Photo: Some of the South African crew of the ill-fated SS Mendi, 1917, one of the photographs on display at Abantu Bemendi, a project of The Centre for African Studies (UCT)

In addition to this live production, the National Arts Festival and the Mendi Centenary Committee with the support of the Centre for African Studies at the University of Cape Town present Abantu beMendi, an exhibition curated by Prof Lungisile Ntsebeza, Nkululeko Mabandla, Paul Weinberg, Dr Lucy Graham,  Dr June Bam-Hutchison and  Dr Hugh Macmillan. Exploring the rich and complex meanings that the Mendi story has acquired through the arts, this exhibition comprises major works by Mandla Mbothwe, Buhlebezwe Siwani and Hilary Graham, rare photographs and documents, poetry, underwater footage of the Mendi wreck, and footage of the ceremony at sea that paid tribute to the families of the men who died in the sinking of the Mendi.

The National Arts Festival takes place from 29 June till 9 July 2017 in Grahamstown.