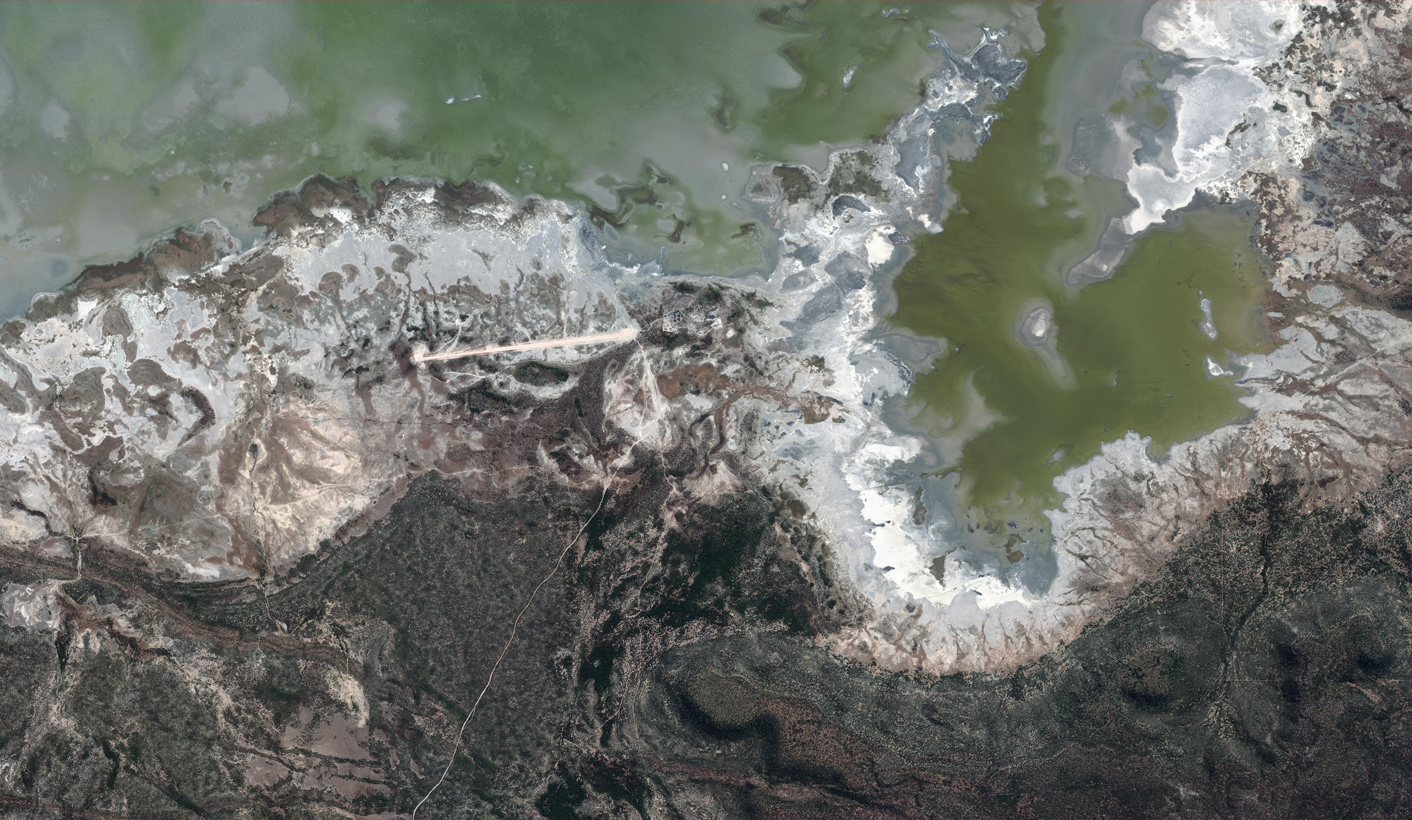 Satellite images commissioned by the INK Centre for Investigative Journalism support allegations by military sources that Botswana Defence Force (BDF) personnel are based at President Ian Khama’s private holiday home in Mosu in central Botswana – and that they are carrying out construction work there. This contradicts the presidency’s claim that Khama is not making use of the BDF for major building work at the remote compound. By Joel Konopo, Ntibinyane Ntibinyane and Kaombona Kanani for INK and AMABHUNGANE.

There is no signage or other indication that a private construction company is at work. The shots of the compound highlight the fact that substantial construction has taken place at the residence since it was first pictured by Google Earth in 2012.

At that time, there was a small collection of buildings known to have included houses for Khama’s two brothers and his sister, Jacqueline.

One soldier deployed to the site said heavy construction commenced in October last year in the final phase of extensions and renovations in the run-up to Khama’s retirement in nine months’ time.

The source, who asked to remain anonymous, told INK that equipment on the site includes two BDF-registered earth-movers, a cement-mixer, a grader and “more than 60 BDF construction workers”.

Khama was infuriated, the source said, and ordered the equipment to be returned with immediate effect. Galebotswe said it was too costly to transport Khama to Mosu by road. The military would, therefore, use Cessna aircraft for that purpose and an airstrip would have to be constructed.

Questioned by INK, he denied withdrawing equipment from Mosu and differing with Khama.

It is understood that the works are in part designed to enhance the compound’s capacity to host VIP guests and their retinues.

Government spokesperson Jeff Ramsay, however, denied this, telling INK that “the only significant recent activity (at the residence) involved renovation of the helipad, which was suspended due to rains, but will continue”.

However, the image shows no sign that the 79 square metre helipad is currently under construction. A completed helipad inscribed with the huge letter “H” can be seen at the south-eastern end of the compound.

Media reports have indicated that Khama moved into Mosu in the late 2000s after the Letlhakane sub-land board allocated him two plots totalling 1.1 square kilometres for the construction of a lodge and compound.

Media reports also indicate that Khama’s former private secretary, Isaac Kgosi, represented him during the allocation of the two plots and supply of water by the water affairs department.

Kgosi refused to comment, saying he was not prepared to discuss the president’s personal affairs with the media.

The project was estimated to have cost around P3-million (R5-million) in 2013. INK could not establish the time-frame for its completion.

The other, 15 ha in area, features 22 buildings with a helipad.

Other buildings that appear to be security “barracks” in the north-eastern quarter of the compound are visible in the image. This represents a major addition since the area was captured on Google Earth in 2012.

At the southern end of the compound there appears to be a large solar panel and a large generator. A fireplace (kgotla) is located in the centre of the compound in front of a rectangular structure.

There is evidence of machinery and three large trucks in the compound and on the road leading to it. A military water bowser can be seen parked beside a large truck and three small items of earth-moving equipment.

To the north, towards the Makgadikgadi Pan, there is a structure that appears to be an observation  tower.

The images also show that a 200m road runs directly from the airstrip to Khama’s compound. The P3-million airstrip appears to be incomplete.

Ramsay told Botswana Guardian in 2013 that “original request to the Letlhakane sub-land board for the airstrip was in the name of the president rather than his office”.

He added that the airstrip is a “strategic” facility registered with the Civil Aviation Authority of Botswana (CAAB) that will “continue to be managed by the BDF as part of its strategic support of the president” and be handed to the authority when Khama leaves office.

It is not clear how the CAAB will manage a private airstrip belonging to the former president.

CAAB public affairs manager Modipe Nkwe was non-committal on the management of the airstrip, but echoed Ramsay’s view that it is one of 22 strategic airstrips in Botswana falling under the authority.

Ramsay also told INK that the compound is a “restricted area (that) requires official clearance to enter”.

He refused to be drawn on whether the president’s residence is protected under the law. “I fail to see the relevance of Protected Places and Areas Act in this context, but perhaps others can assist you (to) better understand the restrictions in the context of presidential security,” he said.

He referred INK to Khama’s private secretary, Gobe Pitso, who said he would respond to media questions this week.

However, the Protected Areas and Places Act – which lists certain properties as protected – makes no mention of Khama’s Mosu home. The act does not extend to images obtained from space.

There has been strong media interest in Khama’s holiday home since 2013, focusing on whether he is using state resources in the development of a private residence.

He is preparing to leave office in nine months’ time, when his presidential term, set by the constitution, runs out.

The decision to make use of satellite imagery was made after three INK Centre journalists who tried to visit the Mosu residence in February this year were detained, threatened and expelled when they were about 5km from the residence by men who would not identify themselves.

The government said the three journalists were attempting to trespass in a restricted area.

The area is closely guarded – so much so that security agents on patrol restrict the movement of local peasant farmers.

Botswana President Ian Khama is renovating his Mosu residence at a time when he is negotiating a retirement package for himself that includes a retirement home worth a cool P34-million (R43-million).

In March this year parliament controversially amended the Presidents Pension and Retirement Bill, which also gives him access to a number of state benefits. These include the right to continue using military aircraft and riding government boats, motorcycles and quad bikes while in retirement.

By far the most expensive of those was the “golden handshake” accorded to Festus Mogae, which included a P20-million house (R25-million) in Phakalane in Gaborone.

Ketumile Masire’s package included a house in Extension 9 in Gaborone which cost about P12-million (R15-million).

Seretse Khama died in office and there are no public records to show how his family benefited when they vacated State House in 1980. DM