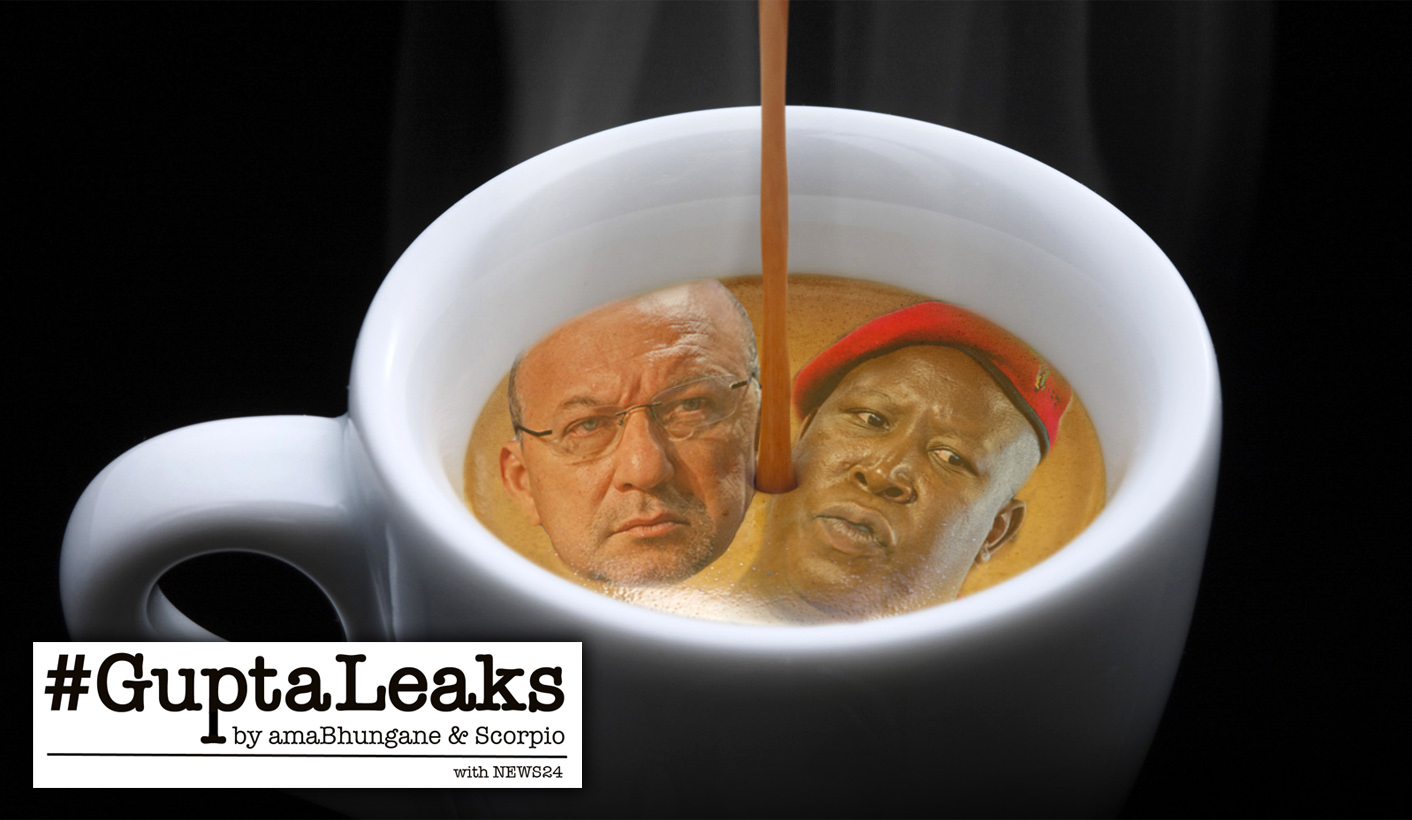 Emails and documents obtained through the #GuptaLeaks showed how the family spied on prominent South Africans, including former finance minister Trevor Manuel; his wife and Absa CEO Maria Ramos; EFF leader Julius Malema and FirstRand bosses Laurie Dippenaar and GT Ferreira, and had access to their traveling movements. By NEWS24.

The tracking of prominent politicians and businesspeople, along with the sourcing of  sensitive information from well-placed moles in key state entities, appear to show that the Gupta business network operated like a fully-fledged spy agency.

Buried among the thousands of emails and documents that make up the #GuptaLeaks is an Excel spreadsheet that wouldn’t necessarily draw attention in a sea of files with far more interesting names.

Document “As1.xlsx” sounds like a dull affair compared to those bearing titles such as “Zwane questoins” (sic), “Bribery Culture of India”, or “Right now WET!!”.

But the file’s contents reveal a disturbing reality – Ashu Chawla, one of the Guptas’ most trusted lieutenants, had been privy to the dates of international flights taken by some of the Guptas’ most prominent adversaries, including EFF leader Julius Malema and former finance minister Trevor Manuel.

The document also features the international flight details and ID numbers of Absa CEO Maria Ramos and those of a handful of so-called “white monopoly capital” business leaders. FirstRand Group chairperson Laurie Dippenaar and the banking group’s co-founder GT Ferreira are among the “WMC” businessmen whose travel details are captured in the file.

Malema this week confirmed to News24 that the ID number listed in the document alongside the initial “JM” is his and that he had flown out of and back to South Africa on the six occasions in 2015 listed in the spreadsheet.

The EFF leader claims that the information could only have come from the department of home affairs (DHA) or from the State Security Agency (SSA). Malema vowed to take up the matter with the office of the Inspector General of Intelligence (IGI).

Dippenaar, Manuel and Ramos also confirmed the authenticity of their ID numbers and the flight dates listed under their names.

“It is deeply concerning to us that this private information appears to have been collected and stored by a third party for reasons unknown to us. This is an egregious breach of privacy and amounts to criminal conduct,” Manuel and Ramos said in a joint statement.

“We are considering the legal options available to us,” the couple added.

The #GuptaLeaks has thus far offered no further clues as to how Chawla – who according to the file’s metadata was the original creator of the Excel document – got hold of the travel information.

But the trove of documents contains plenty of unrelated material that proves the Guptas and their henchmen have been fed sensitive government information by an array of individuals in the public sector, including confidential SSA documents.

Towards the end of November 2015, department of home affairs (DHA) employee Gonasgaren “Sagie” Mudley emailed his resume directly to Tony Gupta. This marked the start of a chain of communication that would see Mudley’s CV being forwarded by Chawla to none other than Thamsanqa Msomi, a Denel board member and then DHA minister Malusi Gigaba’s adviser.

“Kindly find attached a copy of my Resume and note that I have just been vetted by SSA for Top Security Clearance and awaiting evaluation. If you require any further information and clarity please don’t hesitate to call me,” Mudley wrote Gupta.

According to the email, the DHA employee was an assistant director at the department’s immigration inspectorate in Cape Town. His earlier positions, as listed in his CV, make for interesting reading.

From 1989 to 2000, Mudley was a member of the South African Police Services’ (SAPS) narcotics bureau in Durban, where he maintained “strong networks and liaison with intelligence agencies,” according to his resume.

He then had a stint as a SAPS representative at South Africa’s embassy in Namibia, where he was involved in the “management of crime intelligence information emanating from foreign agencies”, before he became the commander of the police’s crime intelligence unit in Bellville, Cape Town. In his latter position, Mudley played a role in the “coordination of all overt & covert special projects & operations,” he claimed in his CV.

Gareth Newham, a governance expert at the Institute for Security Studies (ISS), says the mere fact that Mudley forwarded his top secret clearance to Gupta constitutes a criminal offence.

“It is against the law to forward a confidential SSA document to someone who does not have a security clearance,” says Newham.

Even more concerning is the fact that Mudley, with his brand new top secret clearance, would theoretically have had access to highly sensitive government information that could have benefitted the Guptas.

“A top secret clearance would give one access to a range of sensitive information pertaining to government planning, including procurement planning. Mudley could therefore have gotten access to the records of top secret or confidential discussions around things like the proposed nuclear build program or the procurement of new locomotives,” says Newham.

In February 2016, Mudley forwarded what appears to be a cellphone picture of a DHA document titled “Criteria for Prioritisation of Vacant Posts” to Tony Gupta.

“Please find attached new financial instructions for Dha staff also might have negative implications on foreign posts. This meeting is taking place at this moment,” Mudley told Gupta in the email.

It was just before this exchange, in January, that Chawla forwarded Mudley’s CV to Msomi, adviser to then DHA minister Malusi Gigaba.

What the Guptas and Chawla intended to do with Mudley’s CV, and why Chawla later forwarded it to Msomi, remains unclear.

Gupta associate Chawla also maintained communications with another DHA official, one Gideon Christians, over a period of at least two years, the #GuptaLeaks show.

According to Christians’ CV, which he sent to Chawla in November 2014, the DHA official was the department’s assistant director for immigration services at the Cape Town International airport.

In October 2015, Christians forwarded Chawla a string of emails detailing a spat involving several other DHA officials over Christians’ would-be transfer to the South African high commission in India.

“Bhiysa [brother]. Someone sent this to me unofficially . . . seems there is a fight with HR and FOC [foreign office coordination] to issue the [transfer] letter to me,” Christians wrote Chawla.

Apart from keeping the Gupta associate up to date on his pending transfer, Christians also gifted Chawla with a particularly chunky piece of government intelligence in the form of an Excel spreadsheet. The document, titled “Foreign Missions Budget 2014-2015 edited”, details the names of 51 South African officials posted to diplomatic missions in countries such as Angola, India, China and the United Kingdom.

Apart from the officials’ names and personnel numbers, the document also provides a detailed breakdown of each official’s salary, their child and education allowances, and what their annual rental costs amount to.

Again, the #GuptaLeaks offers no further clues as to what the Guptas would have wanted to do with this document.

But the website of the department of international relations and cooperation (Dirco) suggests that Christians did end up being transferred to India. According to the website, a GC Christians is currently the first secretary for immigration and civic affairs at the South African high commission in New Delhi.

The Guptas and their associates’ interactions with the DHA officials brings to mind the manner in which the likes of former Dirco official Bruce Koloane and former Eskom executive Matshela Koko were covertly doing the Guptas’ bidding.

An earlier #GupteLeaks report detailed how Koko, or at least someone using his name in their Yahoo account, forwarded a confidential correspondence between Eskom and one of the Guptas’ rival mining outfits to two unidentified email addresses. The confidential Eskom document ended up being forwarded to Chawla.

Emails and documents in the #GuptaLeaks show how Koloane forwarded information on the Waterkloof Air Force Base to Chawla, in the run-up to the highly publicized Gupta wedding at Sun City in 2013.

Christians and Mudley did not respond  to request for comment via WhatsApp.

The Guptas’ lawyer, Gert van der Merwe, referred News24 to Oakbay Investments, Gary Naidoo and Ronica Ragivan. None of them responded to our queries. DM