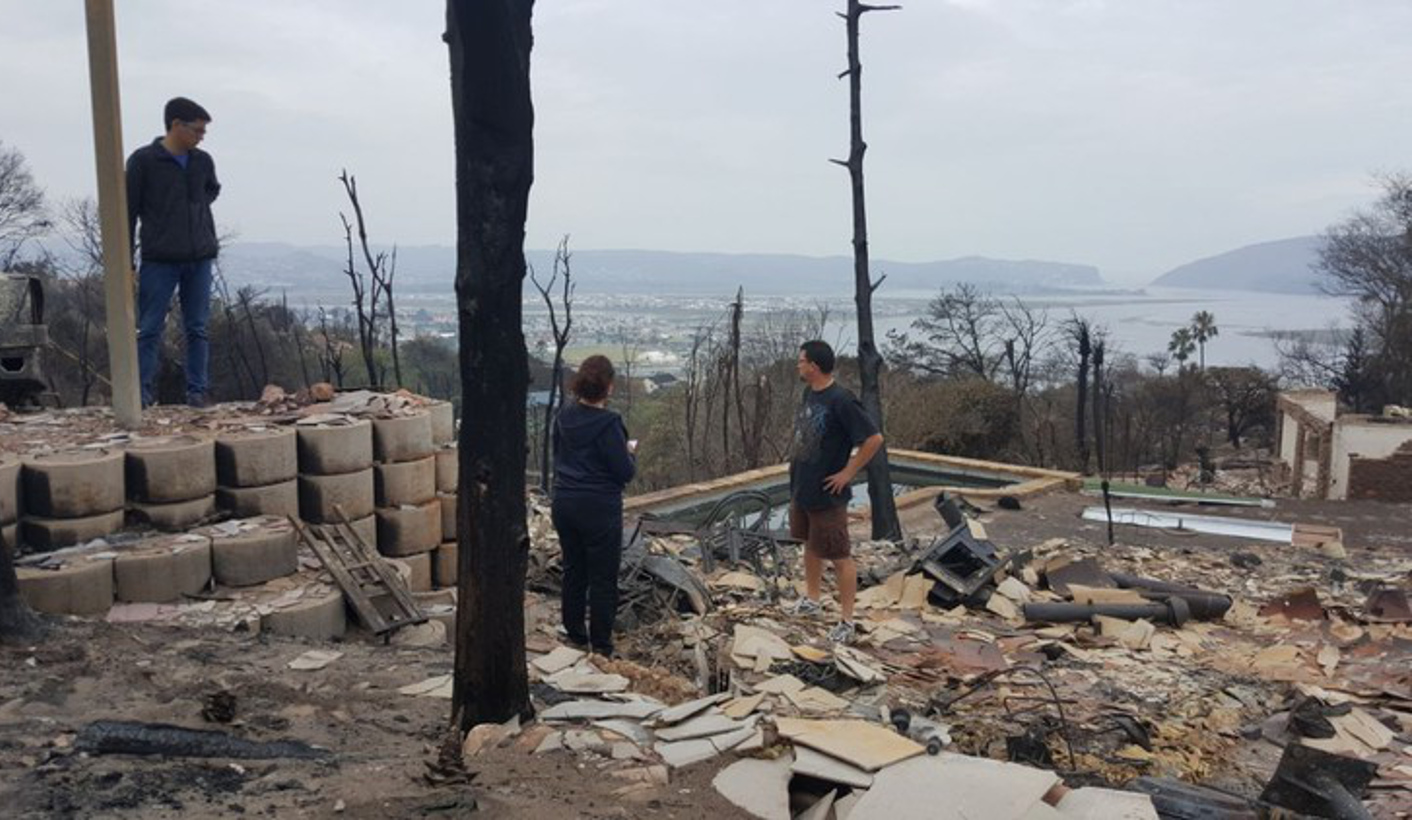 The mayor explains the lessons learnt. By Melanie Gosling for GROUNDUP.

A major problem fighting the massive fires that ravaged Knysna was the lack of communications and electricity outages, said local councillor Mark Willemse.

Landlines were down and Cell C and MTN were not operating. Vodacom was working.

“Comms were an issue. We used SMSes and loud hailers. One thing we can work on better and can change is communications,” Willemse said at a report-back meeting in the town on Tuesday.

Another problem was that the Joint Operating Centre, co-ordinating the fire-fighting and evacuation operations, had been without electricity.

The Garden Route fires that began on 7 June and stretched from Great Brak to Plettenberg Bay, wreaked the most destruction in Knysna where 846 houses were gutted and another 307 were damaged. Of the 846 houses destroyed, 150 were informal structures, and the rest formal dwellings. The suburb hit hardest was Knysna Heights, where nearly 22% of houses burnt down.

A council survey of fire damage revealed that more than 50% of houses destroyed were not insured. Of the people who filled in the survey, 765 said they needed relief aid.

Willemse said Knysna’s entire disaster management plan would be changed “drastically” in the wake of the massive fires, which at times were burning in 26 different places.

“The fires have been a good kick up the butt to wake us up to just what disasters can cause. We will look at anything and everything to make sure it doesn’t happen again,” he said.

Knysna’s executive mayor Eleanore Bouw-Spies said at the meeting that a major lesson learned was the difficulty in getting in and out of Knysna in the event of extensive fires.

“The road network is a problem. At one time both exits from Knysna were closed because of fires. At one stage we were looking at evacuating 6,000 people from Rheenendal, but we couldn’t get the ‘Go George!’ buses in from George. Luckily we didn’t have to evacuate them,” Bouw-Spies said.

Experts have said the number of natural disasters such as fires, floods, droughts and extreme weather events is increasing as a result of global climate change. Asked if Knysna would take the reality of climate change into account in its future disaster management plan, Bouw-Spies said: “We will adopt a climate change adaptation strategy. It is time for us to make sure that we do that.”

Another factor which fuelled the fires was the vast amount of alien vegetation in the area, which burns hotter and spreads faster than a fire in indigenous vegetation. Willemse said the council would tackle the enforcement of alien tree clearing. Landowners outside the urban edge are legally bound to clear their properties of certain invasive alien vegetation, which consumes large quantities of water and is a fire hazard.

Asked if the council would ensure that controlled burns were done at Knysna’s large housing estates, where this was a condition by the provincial government when the estates were given development approval, Willemse said the council would do so.

There were 25 tourist establishments damaged, which represented about 500 beds. About 2,500 people had lost jobs. The mayor said she was concerned that domestic workers would also lose their jobs where their employers had lost their houses.

The council was worried that some residents who were insured would decide not to rebuild, but would take their insurance pay-outs and leave Knysna. This would have a negative effect on the rates base. The council was considering incentives to prevent this, and as a start would waive building plan fees for those houses that were rebuilt according to the original plans. The council was also discussing how it could ensure that houses were built in a more sustainable way, incorporating rain water tanks and renewable energy.

“We really need to be greener in this town,” Willemse said.

The town had more than enough donations of clothing and did not need more. What it needed now was tinned food, toiletries and “white goods” like toasters, kettles and microwaves.

Bouw-Spies said many people from all walks of life had come to help during the fire. “I have really been humbled by all the assistance and help, and all the people who just want to do something, anything,” she said. DM

Photo: Duane Gervais, right, in the rubble of his uncle’s Knysna Heights house that was one of 846 houses in the Garden Route town gutted by fire