Let slip the Dogs of War: How beneficiaries of state capture are protecting their project 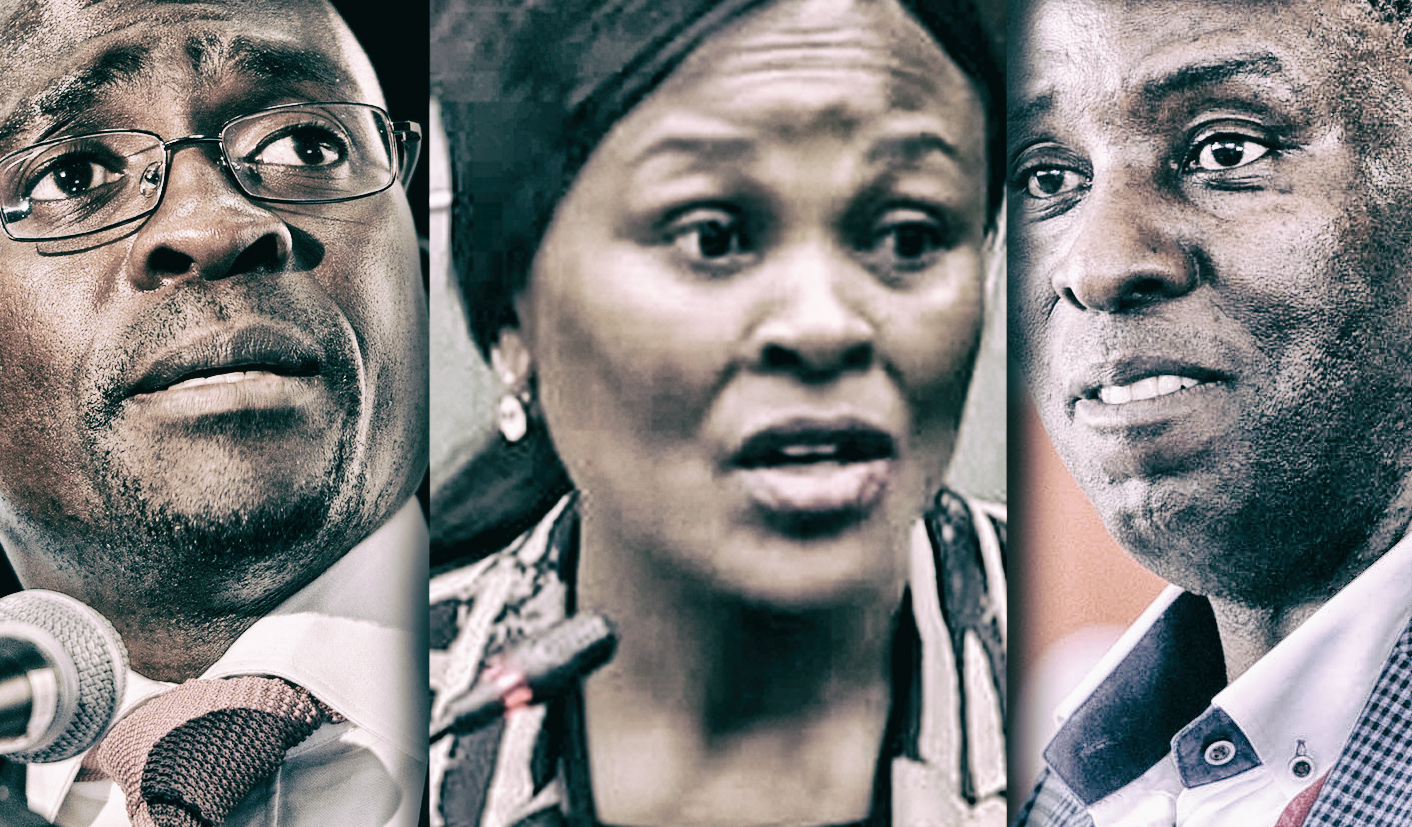 You have to hand it to Public Protector Busisiwe Mkhwebane – she took her time before dipping her toe in the firepool but certainly made a big splash when she jumped in. Her recommendation that the Constitution be amended to change the mandate and role of the South African Reserve Bank caused widespread shock and wreaked havoc on the markets. So what is the agenda behind this manoeuvre and are other people involved? Former Reserve Bank Governor Tito Mboweni rang the alarm bells, imploring that the “Dogs of War” not be unleashed on the country. But how else will the state capture project be protected if not through abusing the state machinery? By RANJENI MUNUSAMY.

Perhaps most revealing in the avalanche of information released in the #GuptaLeaks emails is the level of sophistication of the state capture operation. It has taken years of planning, courting people in key positions in the state, scouting for others who would be deployed as pawns, identifying contracts well in advance and structuring deals that would contribute billions of rand to the Gupta empire.

All of this did not come cheaply. Through former deputy finance minister Mcebisi Jonas we learnt that the going price of a top politician is R600-million. Imagine how much must have been disbursed to have so many members of the executive, the First Family, officials in the government system and highly paid executives in state-owned enterprises all on parade in the Gupta Mardi Gras?

Then there is the £100,000 a month fee paid to the PR firm Bell Pottinger to con the South African public into false debates and demonise people opposing and exposing the Gupta contagion. If there were any doubt about the power of the Guptas, this would have been removed when they forced a Cabinet reshuffle and got Pravin Gordhan and Jonas fired, even though the ANC was fiercely opposed to this.

After such a substantial investment into the state capture project that has yielded massive profits for the Gupta businesses, would they simply walk away now that their emails have been exposed and public hostility towards the family and their enablers, including President Jacob Zuma, is growing?

The Gupta media outlets and social media campaigns are hard at work to change the national conversation. This includes an ongoing series on ANN7 alleging corruption at the National Treasury and continued flogging of the “white monopoly capital” narrative. On social media, there is a surge in the disinformation campaign against prominent journalists in an effort to discredit critical voices against the capture network.

Then there are the Gupta frontline troops in the form of the ANC Youth League, the Umkhonto we Sizwe Military Veterans Association and the Black First Land First group. They are handy noise-makers and a pseudo attack force that keep the public space busy as they fight off non-existent enemies.

But what about that which goes on behind the scenes to suppress and silence those challenging state capture? Surely the fightback is not limited to “Paid Twitter” campaigns, the fake news onslaught and parading discredited “analysts” on the Gupta television network to spew out absurdities.

With the state machinery and unlimited resources at their disposal, the “Dogs of War” have no doubt been dispatched. There is already widespread paranoia about illegal surveillance and security threats against Zuma and the Guptas’ opponents. The leaders of the Democratic Alliance, Economic Freedom Fighters and South African Communist Party have all been alerted to alleged threats against them and all three political parties have taken measures to protect, in particular, Mmusi Maimane, Julius Malema and Solly Mapaila.

ANC members in the parliamentary caucus and even ministers who are standing up against the Gupta contagion have been threatened. There are also security concerns about the safety of ANC stalwarts who have been trying to stage an intervention to rescue the ANC. Journalists and civil society leaders are being constantly warned by “friendly forces” in the security establishment to be cautious about their safety and communications.

But there are many ways the dark state could target opponents, other than monitoring and surveillance. This includes exploiting people’s financial troubles, targeting family members, exposing details of people’s private lives, sabotaging business deals and engineering “accidents”. Then there are political assassinations – a trick perfected by one of our BRICS sister nations to get rid of pesky journalists and political opponents.

We have already seen some of these tactics at play, including the mysterious break-in at the Office of the Chief Justice. There is a great deal of suspicion about the activities of the State Security Agency and the Crime Intelligence division in the police. With generous sponsorship, such operations could also be run outside the state machinery through private intelligence outfits.

Thanks to the foundations of democracy still standing strong, South Africa has oversight mechanisms in Parliament and a free media that is keeping the pressure on those implicated in state capture.

Finance Minister Malusi Gigaba and his deputy Sfiso Buthelezi, who are both knee-deep in allegations of aiding and benefiting from the Gupta network, are claiming to be victims of smear campaigns.

Instead of responding to the substance of the allegations against him, Buthelezi questioned the timing of the release of the information. He said claims that he personally benefited from contracts worth R150-million while he was chairman of the Passenger Rail Agency of South Africa board were a “vitriolic attack”.

On Tuesday, Mineral Resources Minister Mosebenzi Zwane joined the pity party. In his first public comments on the #GuptaLeaks emails, which reveal how he was hand-picked for the job and controlled by the family, Zwane challenged the authenticity of the correspondence.

“I have not even seen one email. It would have been nice if these people who are alleging would actually post the emails to the papers so that we know what they are talking about. I’ve never even seen a single one of them, they are so fortunate to see what I don’t know,” Zwane was quoted by News24.

The veracity of the information in the emails has been confirmed by a number of people, including Zwane’s Cabinet colleague Ayanda Dlodlo and chief operating officer in the Presidency Lakela Kaunda. But Zwane thinks suggesting the correspondence might not be real and claiming to be a victim of a conspiracy against black people still constitutes an appropriate defence.

“So we will not be deterred whether they want to call us this or that, it’s fine. But it’s painful because it always happens to black people,” said Zwane. “I think SA must learn to respect each other if there is an issue, the issue must be addressed rather than beginning to label people on allegations.”

Undeterred by the allegations, Zwane is well on his way to sow mayhem and further sabotage the economy through his Mining Charter, which incidentally holds benefits for naturalised black people – the status his benefactors enjoy, courtesy of Gigaba. But Zwane failed in his previous assignment to engineer a commission of inquiry into the banking sector. Zwane was caught lying that Cabinet had approved his recommendation for such a commission, which would have served to pressurise the financial institutions that had shut down the Guptas’ bank accounts. The Guptas were also looking to purchase their own bank and to fast-track the establishment of a state bank that would also become a channel for their illicit activities.

The commission of inquiry into the banks has not materialised. But Public Protector Busisiwe Mkhwebane has stepped into the breach to initiate a new process. Mkhwebane’s proposal for a constitutional amendment to change the mandate and role of the South African Reserve Bank was not at all anticipated and could turn the financial sector on its head.

Mkhwebane has not adequately explained why this proposal was part of her remedy for the Absa bailout matter. The Reserve Bank has announced its intention to take her report on review. Perhaps Mkhwebane will explain to the court why she exceeded her mandate to make such a recommendation.

But as with all else that is happening, a question must consistently be asked: Whose agenda does this serve?

In his Facebook response to Mkhwebane’s report, the former Reserve Bank Governor, Tito Mboweni, invoked Shakespeare to warn of deceit and underhanded tactics being unleashed on the country.

Those prone to such tendencies should remember the fate of the conspirators in Julius Caesar. Fate is unlikely to be any kinder to the dogs and their masters who conspire against our democratic state. DM