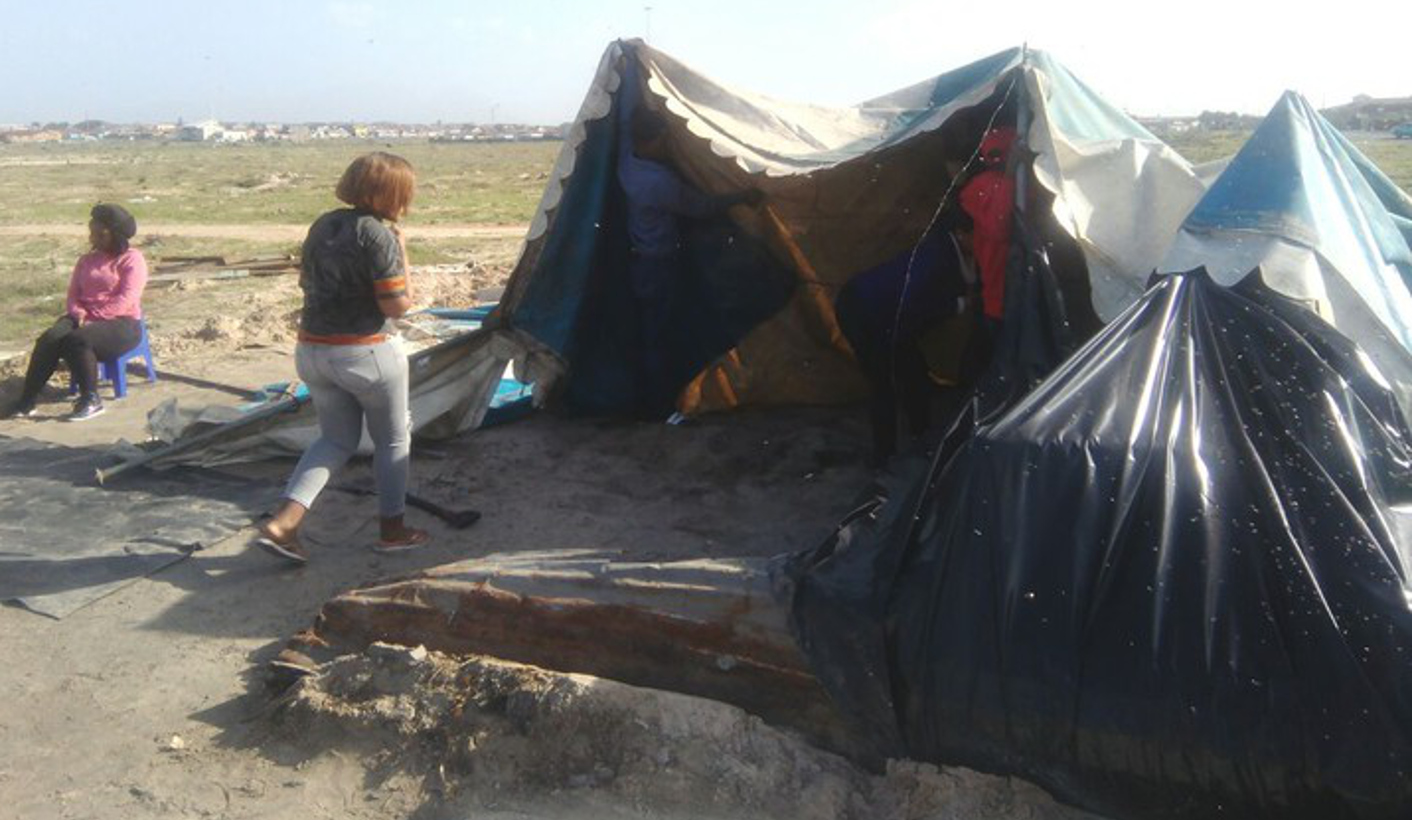 People describe their desperation for a place to call home. By Barbara Maregele for GROUNDUP.

At least six Khayelitsha residents are expected to appear in court on Monday after violent clashes broke out between police and the group reoccupying vacant land in the area at the weekend.

Those who were arrested are due to appear on public violence charges in the Khayelitsha Magistrates’ Court, SAPS spokesperson Noloyiso Rwexana told GroundUp on Sunday afternoon.

The group were among dozens of families who have begun building shacks on an open field near the court. The occupiers, most of whom rent space in the backyards of people with houses, began living in a large blue and white tent on the open land last week.

This is the second occupation on this property in just over a month. Hundreds of backyarders in Town Two began their occupation on 15 May, demarcating hundreds of sites on vacant pieces of land in Khayelitsha. The land next to the Khayelitsha Magistrates’ Court is one of the sites. The other two sites are in Makhaya and Kuyasa.

On 22 May, GroundUp visited the area where some of the erected structures were being demolished. The occupation was one of the biggest in the city in recent years.

Tensions in the community intensified yet again on Thursday evening after several families began erecting shacks on the property. Residents say that since Friday, the City of Cape Town’s Anti-Land Invasion Unit (ALIU) had returned three times to demolish their structures. This led to the arrests of at least six people.

When GroundUp first visited the area on Thursday, the ALIU had instructed residents to remove their tent from the property. About 40 people including an elderly woman and three young children were seen living on the open land. A woman, who asked not to be named, told GroundUp that she was desperate to find a place to live with her six-month-old nephew. “We are homeless. All of our things were taken away the last time, so even the baby has no clothes or food. We are willing to fight for a home,” she said.

Resident Philela Gilwa said the group’s decision to reoccupy the land is because of their frustrations with lack of housing in the area. “We decided to erect a tent after all of our building materials were taken. There are various stakeholders involved here, but we are just tired of being disrespected and our pleas falling on deaf ears,” he said.

“These are all backyarders who don’t have anywhere else to go who have been sleeping (on the land). (On Thursday) we had a stand-off with the ALIU. They are intimidating us,” he said.

Another resident, Ncebisi Fanishe, said he was among the group that first occupied the vacant land about a month ago. He moved to Khayelitsha in 2004 and due to financial difficulties could not afford to buy his own home. “I was living in a backyard in Site C when I heard about the (occupation). I’m here to build my house because I’m tired of waiting,” he said.

On Sunday, tensions flared again as the ALIU assisted by police removed the group off the land. By the evening no one was occupying the land any more, and there was barely any sign that an occupation had taken place. But this is unlikely to be the end of the current spate of occupations in Khayelitsha. DM