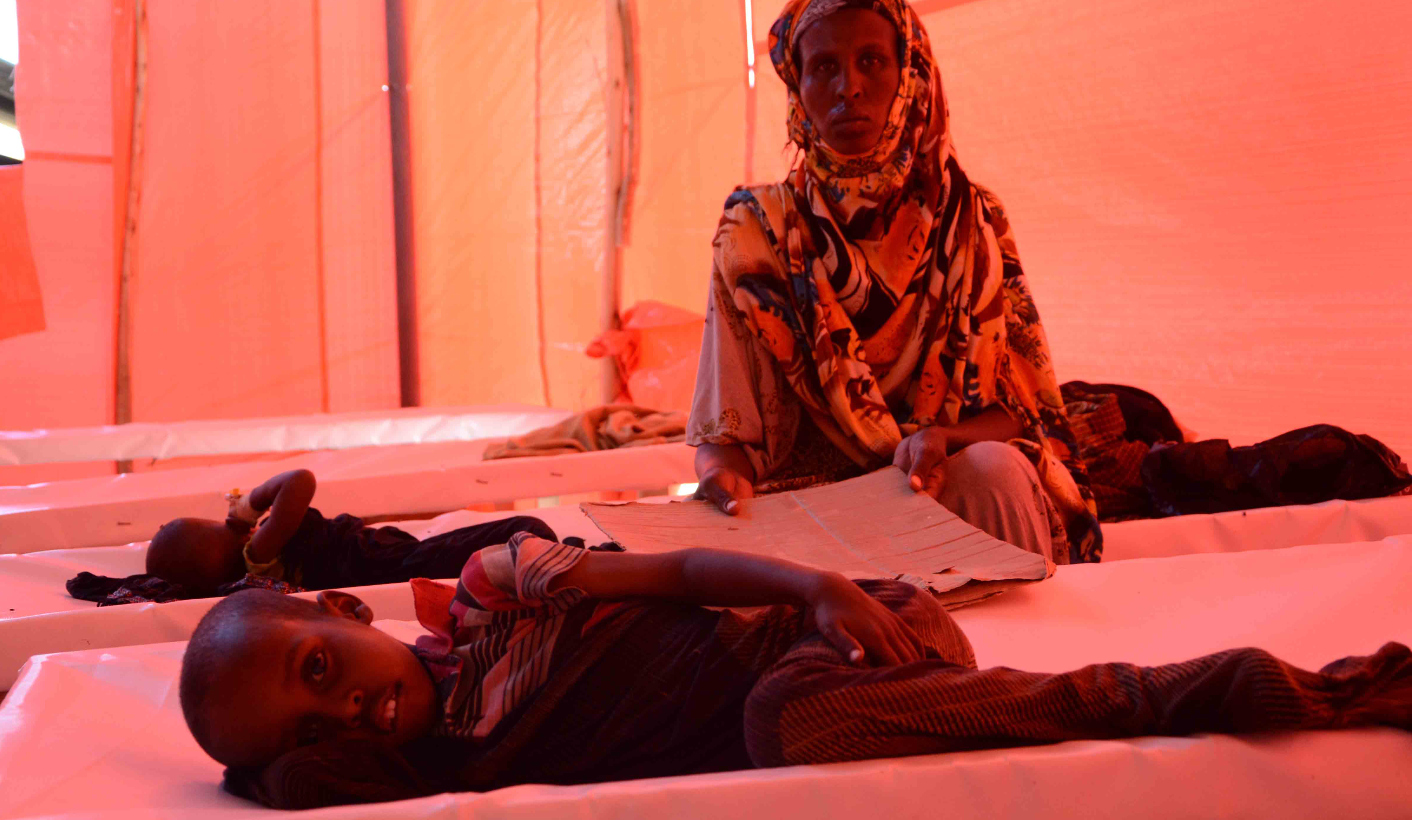 Since the beginning of the year, outbreaks of cholera and later measles have been spreading across Somalia. The severe and prolonged drought has also caused high malnutrition among children. Unicef estimates that 1.4-million children will suffer from acute malnutrition this year, including 277,000 severe cases. By KUN LI.

With just a roof, this open barn was once used as livestock market for Dolow town. Now enclosed by orange tarpaulin, it has been turned into a makeshift hospital for patients stricken by the latest cholera outbreak.

Inside the quiet, stifling wards, two-year-old Rahma lies on a stretcher. No one has noticed – not even her father sitting right next to her – that she is fighting for her life. Quiet and motionless, she appears to be just taking a nap.

John Ntambi, Unicef Nutrition Specialist, happens to walk in during a planned visit to monitor Unicef’s support to the hospital. A doctor by training, he takes one look at Rahma and immediately rushes to her side. One glance was all he needed to see that she is not doing well. But it is already too late.

Rahma’s eyes are rolled back. She is losing consciousness fast. Before anything can be done to treat her, she gasps for the last time, then she is gone.

Slowly, her father, Abdi Mohamed Ali, begins to absorb what has just happened. He gently wraps her body from head to toe in the shawl she has been wearing.

The father and daughter came here at 4am because of Rahma’s severe abdominal pain. They came from the nearby Kabasa camp for displaced people. Because of drought, they had been relying on the river for water.

In the next ward, another little girl also named Rahma is sick with not one but three illnesses – diarrhoea, fever and severe acute malnutrition. Her mother Fatuma picks her up and tries to comfort her, but that only invites more squirms and squeals. This is the second time Rahma has been brought here in just a few days.

Inside the cholera treatment centre, Dr John Ntambi, UNICEF Nutrition Specialist, examines little Rahma who suffers from diarrhoea and severe acute malnutrition. This is the second time she has been admitted recently. Unless the root causes of malnutrition and disease are addressed, “we will just keep seeing relapses and an increase in the number of children in need of nutritional and health services,” says Ntambi. ©Unicef Somalia/2017/Kun Li

“We spent only three days at home then she got sick again,” says Fatuma. “We have been here for four days now and she is not getting any better.”

Since the beginning of the year, outbreaks of cholera and later measles have been spreading across Somalia. The severe and prolonged drought has also caused high malnutrition among children. Unicef estimates that 1.4 million children will suffer from acute malnutrition this year, including 277,000 severe cases.

Compared to the 2011 famine, donors and humanitarian agencies acted much quicker this time when warning signs emerged that Somalia was headed into another famine.

Under its emergency response, Unicef, together with partners, has treated 85,000 children for severe malnutrition and 42,000 for acute watery diarrhoea/cholera. Emergency vaccination campaigns in measles hotspots have reached nearly 530,000 children. One of the cholera treatment centres Unicef supports to contain the spread of acute watery diarrhoea/cholera. Since the onset of the outbreak that has started earlier the year, more than 45,000 cases have been reported, far surpassing the entire case load in 2016. Dolow, Gedo region. ©Unicef Somalia/2017/Kun Li

Yet, the situation continues to worsen for the 6.7-million Somalis caught in the crisis. Even with the arrival of the rains, the threat of famine still hovers over the country.

“Disease and malnutrition is a deadly combination for children. Without adequate food intake, health care, clean water and sanitation, we will just keep seeing relapses and an increase in the number of children in need of nutritional and health services,” says Unicef’s Ntambi.

“All these factors must to be addressed – together with the underlying cause of food insecurity – f we are to avert another famine and another massive loss of lives.”

For Abdi, his daughter Rahma’s death can only be explained by one simple truth.

“Everyone will die one day,” he says. “And today is her day. Allah has taken her. Simple as that.” DM