GroundUp: In photos – residents clash with police in Davidsonville 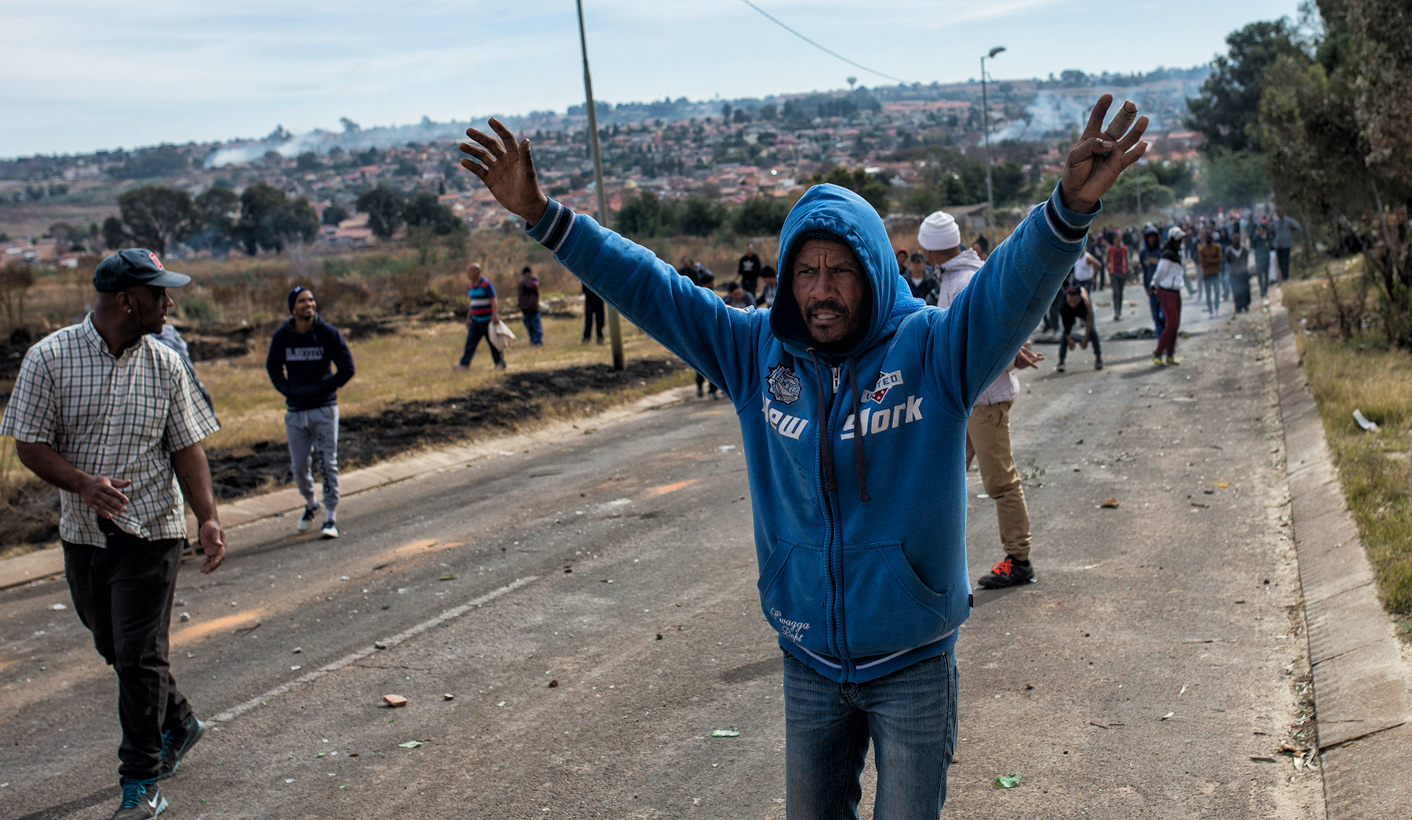 A threat to cut off water and electricity sparks protests, but a multitude of festering problems underlie community’s anger. By Ihsaan Haffejee for GROUNDUP.

Protesters blocked all entrances and exits out of Davidsonville, Roodepoort, on Monday using burning tyres and rocks. Police also sealed off the main roads leading into the area to prevent passing vehicles from getting damaged in the protest.

Residents claimed they received notifications that their water and electricity were to be cut off. This triggered the early morning protest. Running battles between protesters and police carried on for most of the day. Police fired tear gas and rubber bullets in an attempt to push protesters back into the township. Protesters climbed a disused mine dump and retaliated with stones and petrol bombs.

Elton van Rensburg was shot from close range by a policeman.

Elton van Rensburg, a Davidsonville community leader, was shot from close range by a policeman while negotiating with them. He was bleeding from the back of the head and needed medical attention but there was no ambulance on scene.

“I’ve been speaking to the cops the whole day trying to calm the situation,” he said. “But one policeman told me earlier that he is going to shoot me. He wanted to shoot me in the face. Luckily I turned my head quickly when I saw him lifting the shotgun.”

The police claimed they fired because protesters started throwing stones. The protesters however accused the police of firing first.

A police officer is struck by a stone.

The councillor for the area, René Benjamin, was brought in by police to listen to the demands of the residents. These included concerns over electricity bills, maintenance of infrastructure and garbage collection.

Benjamin said the mayoral committee was considering the request to scrap outstanding electricity bills for poor communities but no decisions has been made. Benjamin said that the electricity termination notices were generated incorrectly by the billing system and that there is a “no disconnection policy” for Davidsonville which means that no one will be disconnected from water and electricity in the area.

She also said that concerns over outstanding title deeds has been escalated to the Department of Housing.

A resident throws a stone at police.

Community leader Christebell Pienaar gave the councillor 24 hours to meet with relevant authorities and get back to the community with solutions to their challenges. “We’ve been waiting 25 years for services and so we give you 24 hours for you to come back to us with a response in writing,” said Pienaar.

Residents blocked entrance to the township with stones and burning tyres.

“Our people need an answer here. If you can’t do it in 24 hours, this protest will become more and more trouble and we will reach a point where people will die here,” said a community member as he addressed the councillor before she left.

A protester carries what appears to be a petrol bomb.

Benjamin said she would take the community’s concerns to the mayoral committee and ask for a written response. DM

Main photo: A man approaches police with his hands in the air.