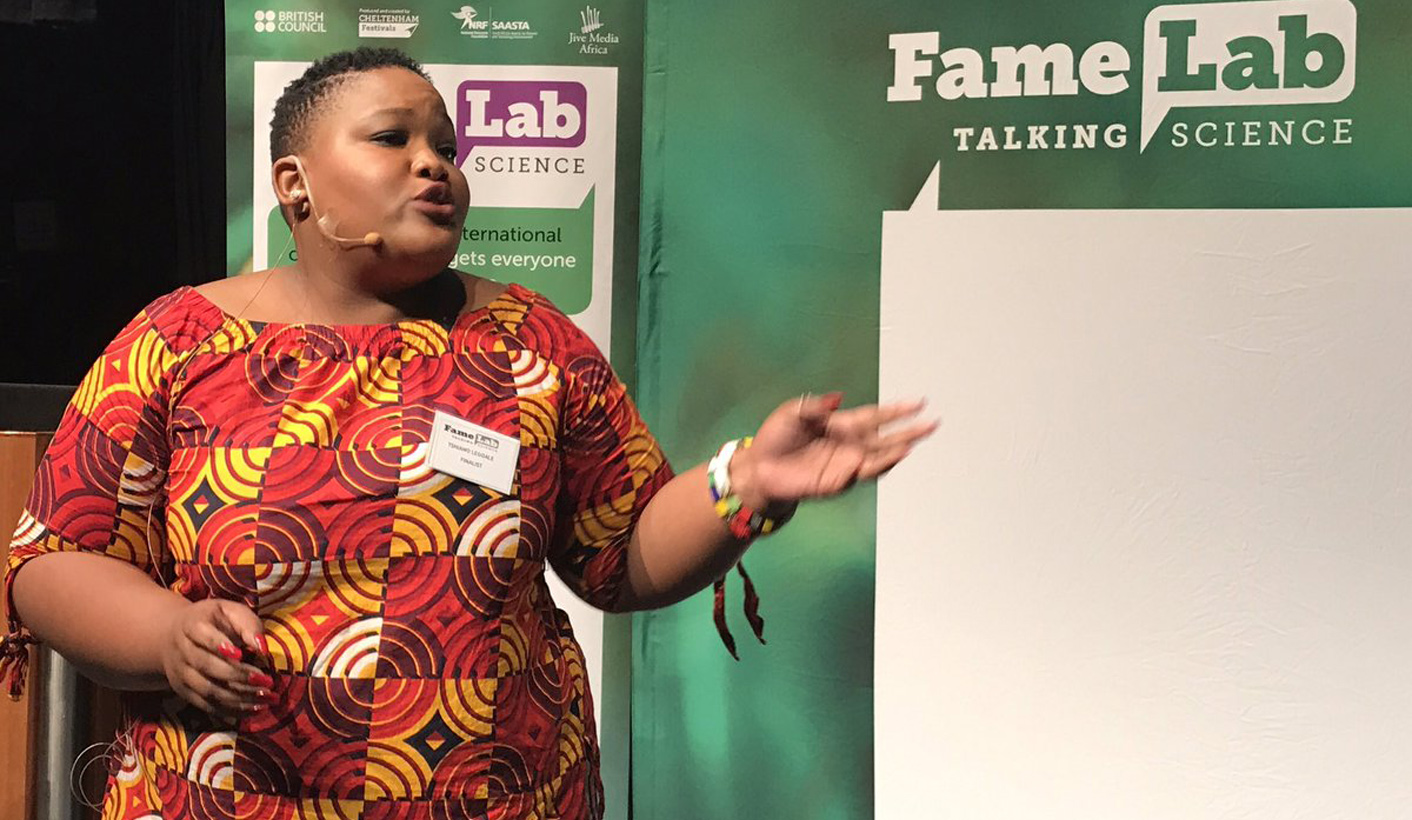 Last week, a young South African scientist nabbed a top international award for her groundbreaking metallurgical research. Geologist Tshiamo Legoale, aged just 27, is probing methods to use wheat as a gold hyper-accumulator – or, as she puts it, “grow gold from wheat”. By MARELISE VAN DER MERWE.

South Africa, Tshiamo Legoale is quick to point out, has an estimated 17.7-million tons of gold waste. “All this gold was mined out previously, but tiny amounts remain in the dumps,” she explains.

Just in time for Youth Month and the Youth in Science and Technology Indaba, Legoale, a geologist and researcher at metallurgical R&D organisation Mintek, late last week won top honours at the FameLab International 2017 contest – one of the largest of its kind globally. She won both the audience and the judges’ vote, which was a surprise, she says, “because all 31 contestants had wonderful research”.

Be that as it may, Legoale cruised to the finish with research that uses wheat as a gold hyper-accumulator, which essentially means wheat plants are used to harvest gold from mine dumps. In layman’s terms, the wheat is planted in the dumps, where enzymes found in the roots react with the gold and the plant absorbs it. Somewhat fortuitously, the gold is absorbed by every part of the plant except the seeds, which means the next harvest can be used for food if need be.

For those with the stomach for a little more detail: this entire process is called phytomining, or extracting minerals using plants in an environmentally sound manner. That wheat is a hyper-accumulator means it can naturally take up gold and not be harmed – and it happens to do so in amounts larger than any other plant. Those handy little root enzymes make the gold soluble, which means it can be stored in the stems and branches, and later – when those stems and branches are incinerated – the gold can be extracted from the ash.

The research represents a win on multiple levels. First, there are the obvious potential socio-economic benefits: food production, job creation, and phytomining itself is more economical than other contemporary mining methods.

Then there is safety. It’s a more environmentally friendly practice than methods like heap leaching, carbon-in-leach or carbon-in-pulp. It’s also safer for miners themselves, who will not be exposed to dangerous chemicals like mercury, which has been responsible for a great deal of toxicity in mine dumps. And it’s safer for those living in the surrounds. Earlier research by Wits University underlined the need to clean up the high levels of existing mercury in South African mine dumps.

“While the large mining corporations are taking the problem seriously and have implemented remedial actions, the challenge lays in the rehabilitation of old, abandoned mines and tailings dumps, as well as artisanal ‘illegal’ mining,” the university said.

The wheat-to-gold method represents a potential alternative to illegal mining, should it be rolled out successfully to multiple locations in the future.

Currently it is at the pilot stage, says Legoale, but Mintek is hoping to roll it out more broadly within the next five years. Future goals include increasing the yield from each crop – it’s currently at around 49%; the research team is aiming for 80% and experimenting with various methods to do so, one of which is increasing the bio-surface of the actual plants. They also want to take the research further, from quantitative to qualitative analysis. “We want to see the human impact,” explains Legoale. “What are the socio-economic benefits, for example, if it’s rolled out within a community? Would human beings be interested? Would they be successful? Would they be able to commit to such a project?”

The human impact is crucial, because Legoale’s win is not only scientific. It is also social and political. As a young, female scientist in South Africa, she represented one of three African countries to make it to the finals of FameLab, which has grown to one of the largest science communication competitions internationally.

Legoale works for the small-scale mining and beneficiation division of Mintek, and one of their mandates is to create jobs in marginalised communities using natural ores. It’s a loaded task: many of the small towns around South Africa’s mine dumps are exposed to toxic waste, pose health risks to residents, and suffer high levels of poverty, which can give rise to dangerous illegal mining. Large numbers of South Africans live near, or are affected by, the country’s mine dumps. For this reason, some of the country’s innovators have devoted their research to reducing contamination around mine dumps and attempting to put them to use.

Legoale explains that for Mintek to meet its goal of using natural ores to benefit marginalised communities, the most efficient route is to use those ores in close proximity. “Most of the ores around small towns is mine waste,” she says. “So one of the innovations we are working on is trying to extract the metals from dumps. This includes rock waste dumps and tailing dumps.” And, of course, to use safer, more economical and more environmentally friendly ways to do so.

With this in mind, Legoale says it may, in the end, be necessary to balance the needs of communities with the desire to increase yield. “Are we looking to make a fortune or are we looking to put food on the table?” she asks. “These are all things we consider when we conduct such research.”

South Africa is not the only country with the potential to benefit from phytomining. A new species of nickel-eating plant made waves when it was discovered in the Philippines, with researchers finding that it could store up to 18,000 parts per million of nickel in its leaves as part of its diet, without getting poisoned.

“Stripping mining is pretty devastating for landscapes,” Australian researcher Antony van der Ent told Fox News. “You essentially end up with land that’s not useful for many things. The soil is very nutrient-poor, so it’s very difficult to do any normal agriculture on it.” But hyper-accumulators, miraculously, are able to thrive.

In Australia, the Centre for Mined Land Rehabilitation is hard at work attempting to find plants that can assist in making mining a little less toxic. Dr Peter Erskine, one of the researchers at the centre, said they had identified several new species capable of taking mining above ground rather than below it.

At Mintek, meanwhile, Legoale continues to go for gold. DM