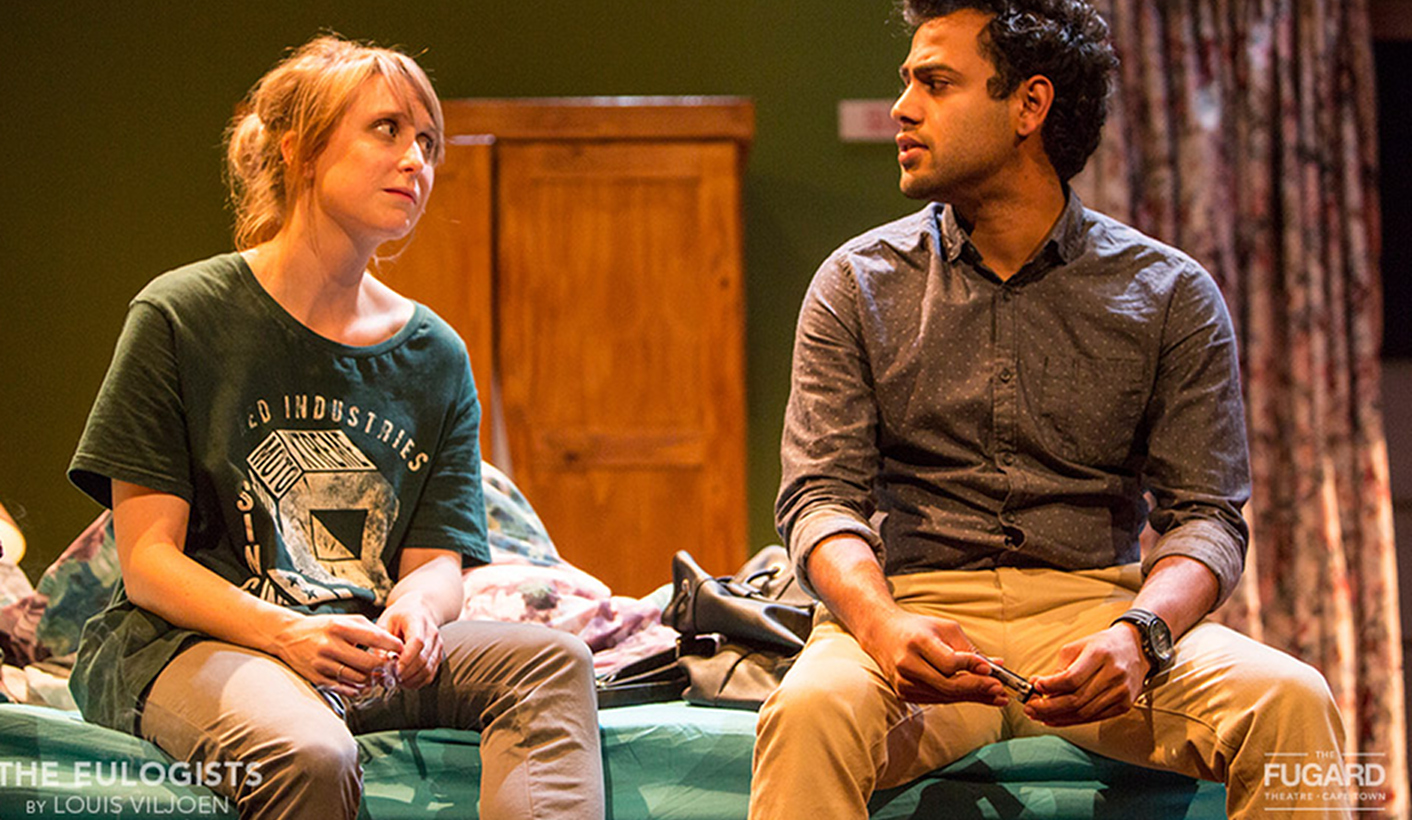 Three journalists hunker down in small town South Africa, waiting for the story of their lives: the death of a beloved national leader. Stuck on “death watch”, each reacts differently. A woman (Emily Child) who made her name writing an intimate account of her year of access to the leader confines herself to a hotel room, incapacitated by a sense of dread. Her eager young assistant (Kiroshan Naidoo) scurries about chasing a story only he knows the potential impact of and a grizzled correspondent (Pierre Malherbe) amuses himself playing high-stakes power games. In the dying world of print journalism, how are national myths made and what price do their weavers pay? By CARLA LEVER.

This is the premise of Louis Viljoen’s new play The Eulogists, currently playing at the Fugard. If it feels familiar, it is for more reasons than ghosts of Zelda le Grange’s Good Morning, Mr Mandela. A cynical story-seeking threesome delving into industry ethics may not be a tale as old as time, but it is certainty a tale as old as David Mamet’s Speed-the-Plow: an ‘80s skewering of the Hollywood production system, complete with very ‘80s gender dynamics. In the dirty business of story-making – whether in celluloid or in print – pitting what sells against what heals can make for a bumpy ride.

Viljoen’s Audrey is not Mamet’s Karen – she’s a bestselling author not a secretary – but for all the deference her status is given, she may as well be a temp. Indeed, Audrey (Child) spends a large proportion of the play being either ignored or belittled by her two colleagues. In perhaps the most infuriating exchange of the piece, Harris (Malherbe) taunts her to breaking point, leaving her desperate for answers but unable to draw anything from his impassive face.

It’s gender dynamics like this that characterise Louis Viljoen’s plays – whether you find them brutally unflinching or simply brutal is a matter of personal taste. Certainly, Child’s Audrey is capable of giving as good as she gets, at one point chastising Zee (Naidoo) for projecting his own insecurities on her: she’s been lucky, she says, which for men is the most infuriating thing for a woman to be.

In this thick soup of sexism, there’s an interiority and canny awareness to Audrey that is great to see Viljoen explore. This is a mature Viljoen at work, one who feels generally more sure handed in his distinctively gritty style, not having to rely on profanity or extremism to shock, but rather trusting psychology and circumstance. The dialogue fizzes with well-landed barbs, designed to make us, as much as the characters, squirm. Profanity is used as judicious spice not main dish, and packs all the more punch because of this. Viljoen delights in revealing the gritty underbelly of everyday encounters – and his suggestion that anything else is convenient fantasy sticks to theatregoers’ sides long afterwards.

Though there are plenty of thought-provoking takes on contemporary issues, not to mention a fair share of authorial side-eyeing, I felt the tale could be tightened: the run-time is listed as a tight 60 minutes, but feels longer. Perhaps this has much to do with the cabin fever that sets in viewing a single room scene with three reasonably unlikeable characters. Perhaps it’s the insularity of their world where we can be in a hotel room in small-town South Africa with one Indian and two white journalists and the only political context is personal. In the world of The Eulogists, race isn’t an issue. It isn’t even an inconvenient footnote. So it is that this dark fantasy of South African-ness is in actuality a very white one – something that may well be the point.

Viljoen and Greg Karvellas have secured a respective writer/director residency at the Fugard that ensures their continued partnership. They often choose to work with the same actors too: Child was in The Pervert Laura (2015) and Champ (2013); Malherbe in The Kingmakers (2016) and an earlier iteration of Champ. A past winner of the Fleur du Cap for most promising student, then, Naidoo is a welcome fresh face. His easy, gentle manner sits pleasantly at odds with the stereotypical hardened Viljoen protagonist. These, then, are three talented actors, at work on a fresh script with full institutional backing.

For much of the play, I felt curiously as if I was in a read-through. Rhythm was often stilted. Lines felt awkwardly formal, overly loud, too-carefully phrased: this simply wasn’t how people speak. In the opening sequence – a tricky one comprised entirely of one side of a cellphone conversation – the words weren’t Naidoo’s own yet: something I regularly felt with Malherbe too. Now this issue can – and no doubt will – change as they settle into the run. But it didn’t help with the pacing and it doesn’t deliver on the script, whose words I feel are mostly very fine indeed.

The exception, for me, was Child. Her soft-footed padding across stage hinted at a comfortable casualness the others could not hold. Above all, I bought her delivery, her words clear but never forced, her manner believably one of genuine frustration.

Director Greg Karvellas has the play’s action overwhelmingly take place in a T-shape – from left to right with short interludes towards a rear central exit. The resulting action felt stiffly formal, much like a hotel room itself. Much of this stems from the linearity of Rocco Pool’s set, the flat-on furniture arrangement limits the characters to linear interaction, backs to walls and bodies facing formally outwards even as interaction occurs sideways, moving from profile to full-face, on repeat.

I may have my quibbles with Viljoen’s subject matter – an hour of psychological musing and social insularity is a hard sell – but not with his talent. It’s certainly interesting to see him tackle such a sacred national story, pull apart the national binding and show the way the tale is made. The Eulogists is rainbow-ism through a Gupta lens: the perfect combination of destructive cynicism and desperate hopefulness to capture a national mood. Much like our democracy, though, it just needs a bit more work. DM