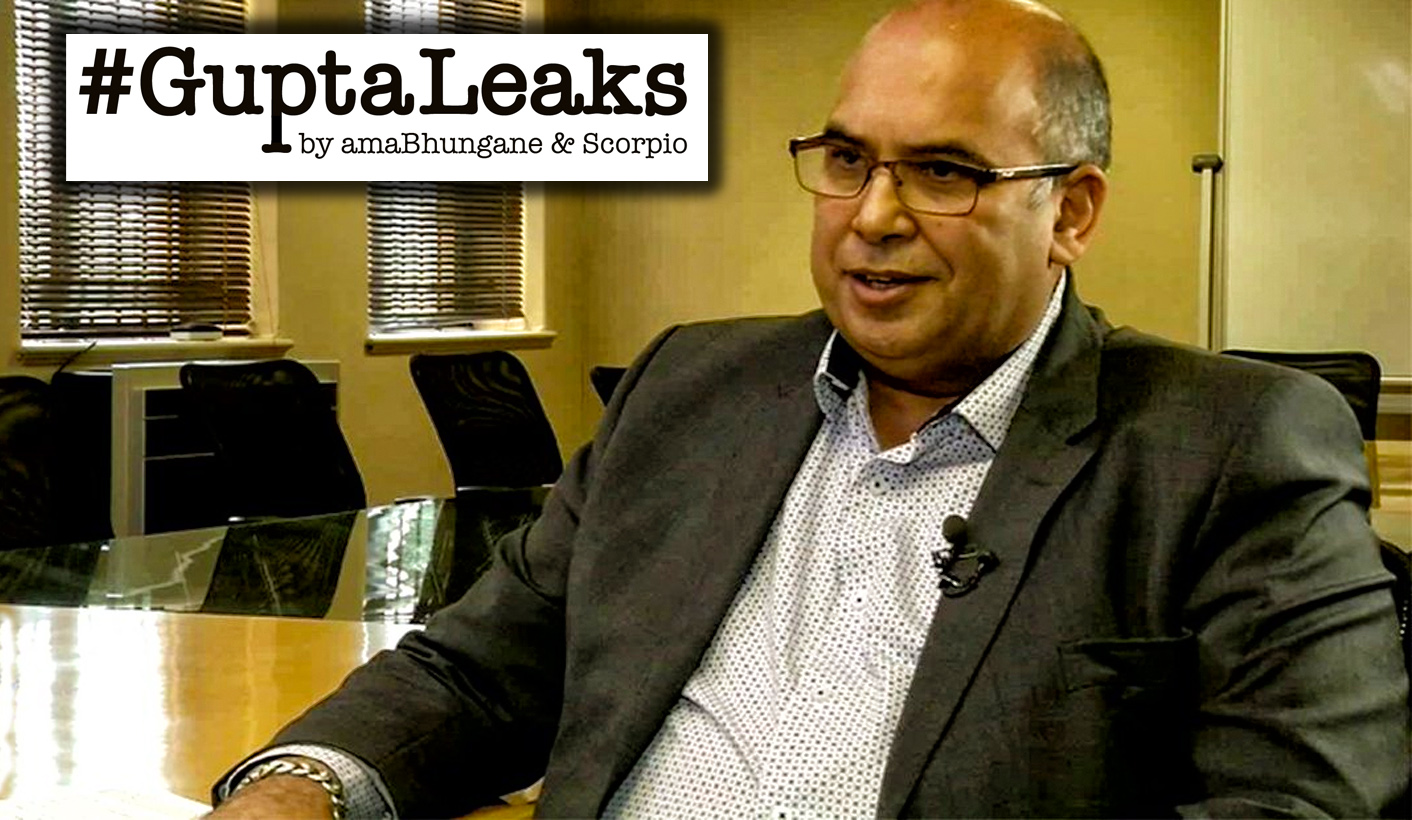 Owning their own newspaper and TV station was only the beginning of the Guptas’ plans. Leaked emails show that they hoped to build up a South African media empire – and to do so, considered at one stage or another buying the Mail & Guardian, a portion of Independent Media, and Primedia. The key, as they saw it, was to win some of the lucrative government advertising their existing media assets have benefited from – through pro-government positioning. By SCORPIO and AMABHUNGANE.

Should the Guptas buy the Mail & Guardian? This was the question being mooted by the family in early January 2016, when they traded emails discussing the matter they had codenamed “Project M”. As The Times reported on Monday, the Guptas weighed up the possibility of buying the newspaper to reposition it as a pro-government, pro-Zuma, pro-Gupta newspaper, and thereby win valuable government advertising contracts.

But the Mail & Guardian was not the only media outlet in the Guptas’ sights – and certainly not the most desirable.

It was Primedia – the company which owns radio stations including 702 and Cape Talk; the Eyewitness News service; and Ster-Kinekor – that a Gupta employee characterised as “the jewel in the crown”.

In a memo sent to Tony Gupta on 3 December 2014, Oakbay’s Vim Rajbansi announced: “We are studying Primedia…We have started bringing them to the table to talk. We have done a high level financial valuation on the entity.” He stated that one of the group’s major shareholders, private equity firm Brait, was looking to sell its stake in Primedia, and that there were “legacy issues” with another shareholder, the Mineworkers’ Investment Company (MIC).

“Primedia needs to make decisions and act. We are not desperate buyers and they not desperate sellers so our talk of collaborating on media business to add value to the business model [sic]. We want to expand our business and there is a strategic fit.” Elk reportedly said that he would discuss the Guptas’ offer to buy a 51% stake in the company with fellow shareholders Brait.

In a later email, Rajbansi elaborated on the plan: “We merge with Primedia and list together [on the stock exchange] in 3 years.”

A presentation on the proposed Primedia merger, from November 2014, explains the rationale further.

“As we grow we need to do bigger investments,” it reads. “Smaller ones become irrelevant. Bigger bits of big companies at acceptable prices. The Primedia merger is the biggest deal. Target investments that would show the company as a serious business partner and a significant player in the media industry.”

It continues: “Where can we be together in five years? Primedia has gaps in their portfolio and we successfully entered television.” The presentation also suggests: “Consolidation will be good for the [media] industry.”

A meeting was scheduled with Primedia’s erstwhile chairman Kuben Pillay in January 2015. From there, the track goes cold on the leaked emails.

Was Rajbansi exaggerating the level of interest in the proposal to impress his boss?

“The board of Primedia never considered a transaction with the Guptas,” Primedia CEO Roger Jardine said on Tuesday. “I am not aware of any discussions between a director or shareholder of Primedia with the Guptas or their representatives.”

With regard to the question of whether Primedia would have been open to a hypothetical merger with the Guptas, Jardine said: “The board and shareholders of Primedia are very mindful of the need for a strong and independent media in South Africa. I can confidently state that if a transaction of this nature was ever tabled at our board it would receive no support.”

The Guptas may have failed to secure stakes in the Mail & Guardian or Primedia, but they progressed further with another plan – to buy into Independent Media, publishers of 18 South African newspapers.

Back in happier times, the Guptas enjoyed a close friendship with Iqbal Surve, the chair of Independent Media’s owners Sekunjalo. Surve, his wife and two children were guests at the wedding of the Guptas’ niece in Sun City in 2013. Emails show that Surve even had his PA request a better hotel room for him at the wedding, as “Dr Surve is a good friend of the Guptas”.

Things soured, however, after Surve entered into negotiations to buy Independent Media in 2012. As amaBhungane previously reported, Surve offered the Guptas a conditional stake in his consortium at the time that amounted to 27.5% of Independent Media – which would have been a bigger stake than Surve’s own.

The idea was that the Guptas would bring to the table experienced media hands like Nazeem Howa, and financial help with the Independent buyout.

What would the Guptas get in return? For one thing, the right to appoint the editors of newspapers like the Cape Times and The Star. This has been confirmed by the leaked emails. In an April 2015 email to Oakbay’s lawyer, Howa writes: “The appointment of [Independent] editors was a hard-won victory in the negotiations.”

The Guptas had already made a play to purchase Independent Media on their own, and been rejected. Going through Surve represented another bite at the cherry. But Surve reneged on his pact with the Guptas amid a dispute over what the shares were worth, and the two parties have been locked into legal processes since.

In February 2016, Surve approached the Public Investment Consortium, which helped finance Sekunjalo’s Independent Media purchase, to ask whether the PIC would give its blessing to the Guptas taking such a large stake of Independent. The PIC’s chief executive Dan Matjila cited the possibility of “anti-competitive behaviour” in his response, and resolved that it would not “be in the best interest of our investment” to approve this move.

Oakbay’s lawyer Gert van der Merwe told amaBhungane at the time that all that Matjila’s decision revealed was that Majitla was “biased, ill-advised and not authorised to express an opinion”.

At time of writing, then, the Guptas have thrice been rebuffed in attempts to extend their media holdings in South Africa. To envisage what would have happened to the three respective media outlets if they had been successful in these plans, we have the example of The New Age and ANN7.

On Tuesday, the Democratic Alliance announced that a reply to a DA parliamentary question revealed that the government Communications Department spent R988,689.84 on a single The New Age breakfast briefing in May 2016. An Oakbay brochure boasts that the company has hosted 50 such breakfasts, amounting to taxpayer sponsorship of potentially up to R50-million.

This is in addition to the R4-million spent by the Free State Provincial Government on The New Age advertising in 2016; R1-million from the SABC in The New Age subscriptions in 2016; and a further R10-million spent by the Communications Department on advertising in the newspaper in 2015. There have been many millions more of taxpayers’ money landing in the Guptas’ coffers in this way.

The deal is clear: The New Age wins the lion’s share of government advertising, in exchange for producing a pro-government newspaper. Emails show that the plan for making the Mail & Guardian profitable was identical: change the editorial positioning to pro-government, and watch government advertising stream in. No doubt the same approach would have been taken with Primedia’s media outlets and the Independent newspapers.

There is no evidence from the emails that the question of what this would have done to a free and vibrant media in South Africa exercised the Guptas in the slightest. As their Primedia proposal stated: “We are investors – we invest at acceptable prices because we look to profit from the result of the enterprise.” DM