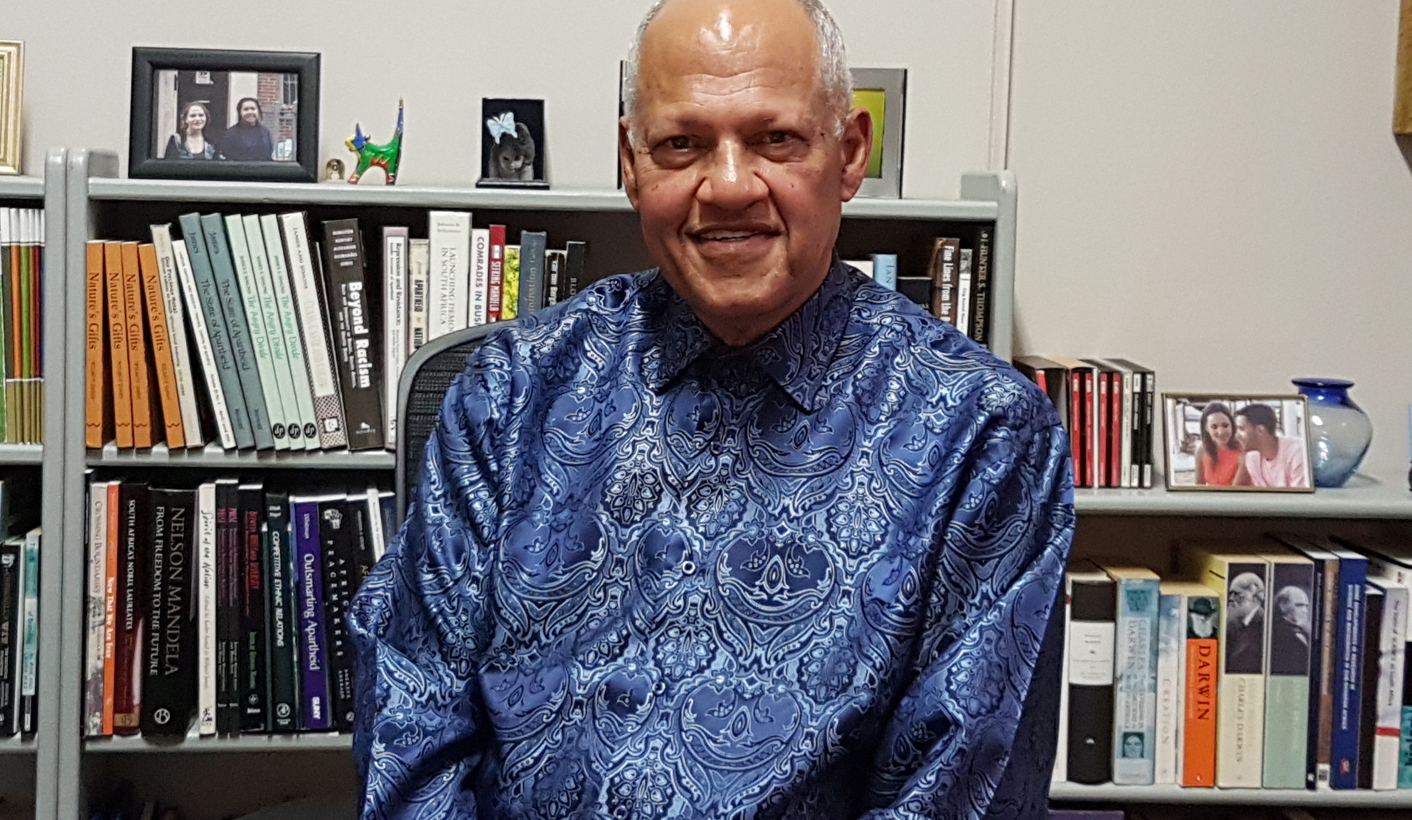 Mmusi (Maimane) has to get the DA ready for peak performance heading towards the 2019 elections, not be spending time putting out internal fires, especially the volcanic eruption caused by Helen's Zille’s efforts to defend her quite considerable legacy, said Wilmot James. By JANET HEARD.

If Helen Zille wished to protect the party and her legacy, she should stop “digging herself into a hole” but rather step down, according to outgoing Democratic Alliance MP, Wilmot James.

“I am disappointed that she is behaving in this way,” said James, referring to Zille’s reluctance to apologise unreservedly for her ill-fated tweet about colonialism and her determination to justify her position despite an appeal from DA leader Mmusi Maimane.

James was interviewed as he exits Parliament to depart for the US on a one-year appointment as a visiting professor at Columbia University, where he will focus on infectious epidemics and global health security.

Careful not to comment on the merits or otherwise of the case pending the internal disciplinary process that is under way, he said: “Wisdom has never been one of Helen’s qualities, so she goes about it (protecting her legacy) the wrong way by trying to control, bend and manipulate every move of her successor. It’s intolerable. By doing that she is not defending her legacy.”

James, who is a known critic of Zille’s leadership style, said he had tremendous admiration for the Western Cape premier and former party leader who has been given until Tuesday to submit a response to a federal executive decision to suspend her from party duties pending the outcome of the hearing. Zille should be remembered for her “superb analytical skills” and ability to run good governance. “She knows how to do it right. She is the DA’s brand. That is what she should be remembered for.”

The damage to the party had been considerable. The DA was trying to fight off a narrative that it was a white party “and that black people who are leading the party are instruments of white power.”

“And Helen has just confirmed this narrative in her actions. The narrative is unfair, it is not true and membership figures show otherwise. But the damage is quite serious, given what the party is trying to do in repositioning itself in a racialised landscape.

“This controversy is the last thing that Mmusi needed,” said James, claiming that Zille had a history of supporting new leaders, then destroying them, a claim strongly disputed by Zille, who also rejects Maimane’s contention that she had not apologised.

“It is not a racial thing, it has been the case with a number of white and black colleagues,” said James. “The most visible has been what happened with (former DA parliamentary leader) Lindiwe Mazibuko. Helen supported her then subverted her. She has supported Maimane, and is now subverting him. This is reckless,” said James, an ally of Mazibuko, who stepped down in 2014.

“Mmusi has to get the DA ready for peak performance heading towards the 2019 elections, not be spending time putting out internal fires, especially the volcanic eruption caused by Helen’s efforts to defend her quite considerable legacy” said James.

“Remember the title of her book is Not without a Fight. The sub-title should be Here are a 1,000 reasons why I am always right. If the DA’s future is a priority for her, she should find a way of stepping aside.”

As a parting shot to his party, James said he hoped that members unite behind Maimane. “The worst thing a party can be is being internally focused. Everybody must get on purpose for 2019,” he said warning that if efforts failed, “the party could be torn apart”.

James, 63, said his respect for the young DA leader had grown since he challenged him in a fiercely contested leadership race in 2015 in which Maimane was the frontrunner from the get go.

Under Maimane, the party had gained more votes and was co-governing three more metros. Maimane – now 37 – had also successfully raised funds. “He hasn’t hesitated to lead the party, and has the ability to self-correct. He has done better than I thought. He has grown into his role.”

The party needed to be disciplined. “All this racial stuff is a symptom of not having sufficient discipline and clarity on what the party’s moral purpose is, which is to create a better South Africa, not serve the interests of a few individuals.”

Maimane was tasked with uniting the party at a time when the provinces had become more powerful with three new DA metro mayors at the helm. “Zille didn’t face this challenge as DA leader, and Maimane is doing his very best to get that right, to build the party nationally.”

James is looking forward to immersing himself in research in New York. He will be a visiting professor of health security and diplomacy based in the College of Physicians and Surgeons (medical school), a joint appointment with the School of International Public affairs.

He will also consolidate his relationship with a prestigious research network under the Global Health Security Agenda. The network’s agenda is to improve, prevent, mitigate against and respond to outbreaks, which include chemical, nuclear and multiple hazards, and with climate change, food security and cyber security being core to their programme.

An academic for much of his professional life and an MP for eight years, James has studied and lectured the morbid topic of death and death patterns since he was a sociology student in the 1970s.

He was increasingly drawn to global health issues after the unacceptable devastation caused by Ebola a few years ago. “11,000 people died, and they didn’t have to die. Children died in isolation because they were shunned.”

The deaths took place because African governments did not invest adequately in health systems, and the global community responded too slowly. “We really need to do a lot more,” he said.

James said the impact of an inadequate response to the Izika virus more recently had been that 3,000 moms gave birth to children with microcephaly in South America. “You know what that means? They will be utter vegetables. It will break their families, and the medical requirements are unbelievable” he said.

The earlier trigger of pandemic interest, of course, was closer to home with the HIV-Aids pandemic, which led to 300,000 unnecessary deaths in South Africa, he said.

As health spokesperson in Maimane’s shadow ministry, James has had a front-line seat to local health issues.

The lesson from the Esidimeni scandal, where at least 94 psychiatric patients died, was that the country lacked an early detection system. “The minister learnt about the deaths from Section 27. That is criminal. Every country worth their salt has a proper surveillance system so that if there is an unusual death, it will be detected immediately.”

While James was respectful of health minister Aaron Motsoeledi, saying he was a passionate doctor, he did not hold back on his criticism. “He is not a strategist, and he doesn’t listen. He is all over the place, he should be more focused. He cares about people and health. That is not lacking, but he should work with what he has got, not turn it all upside.”

James has taken a year’s leave of absence but has negotiated for a return to parliament. In the meantime, Maimane, who replaced James with Patricia Kopane in the health portfolio, strategically took the opportunity to shake up his shadow cabinet, including freeing up Gavin Davis to focus on policy development and communications ahead of the 2019 elections and Geordin Hill-Lewis to focus full-time as his chief of staff.

James, who leaves South Africa on Saturday with his wife and youngest daughter, doesn’t feel that he is letting his side down by taking a break from politics, admitting that he has been on the periphery of party politics since departing as Federal executive chairperson.

“There are big things to prepare for in 2019, and I certainly want to be part of that,” he said, not ruling out aspirations for a senior position that could include Western Cape premier.

He said his biggest national concern was the “political thuggery” at play under president Jacob Zuma.

“In 2004, (the late ANC stalwart) Kader Asmal said to me that the thugs have taken over. He spotted it then. And right now they are hanging on for dear life, no matter the consequences. This means no job growth, a poorer investment climate, and a country in decline.’’

The fightback had begun, and the climate was ripe with opportunity, particularly for the opposition. “We are not Zimbabwe. We have a great judicial system, the NGOs and churches have found their voices. We are strong and resilient.”

However, he would be “surprised” if the ANC lost power in 2019. “They are also resilient as an organisation. That must not be underestimated.” DM

Photo: Outgoing MP Wilmot James is taking a break from parliament to return to academia for a year. Photo: Janet Heard