Brian Molefe: The fall and fall of the Guptas’ state capture kamikaze pilot 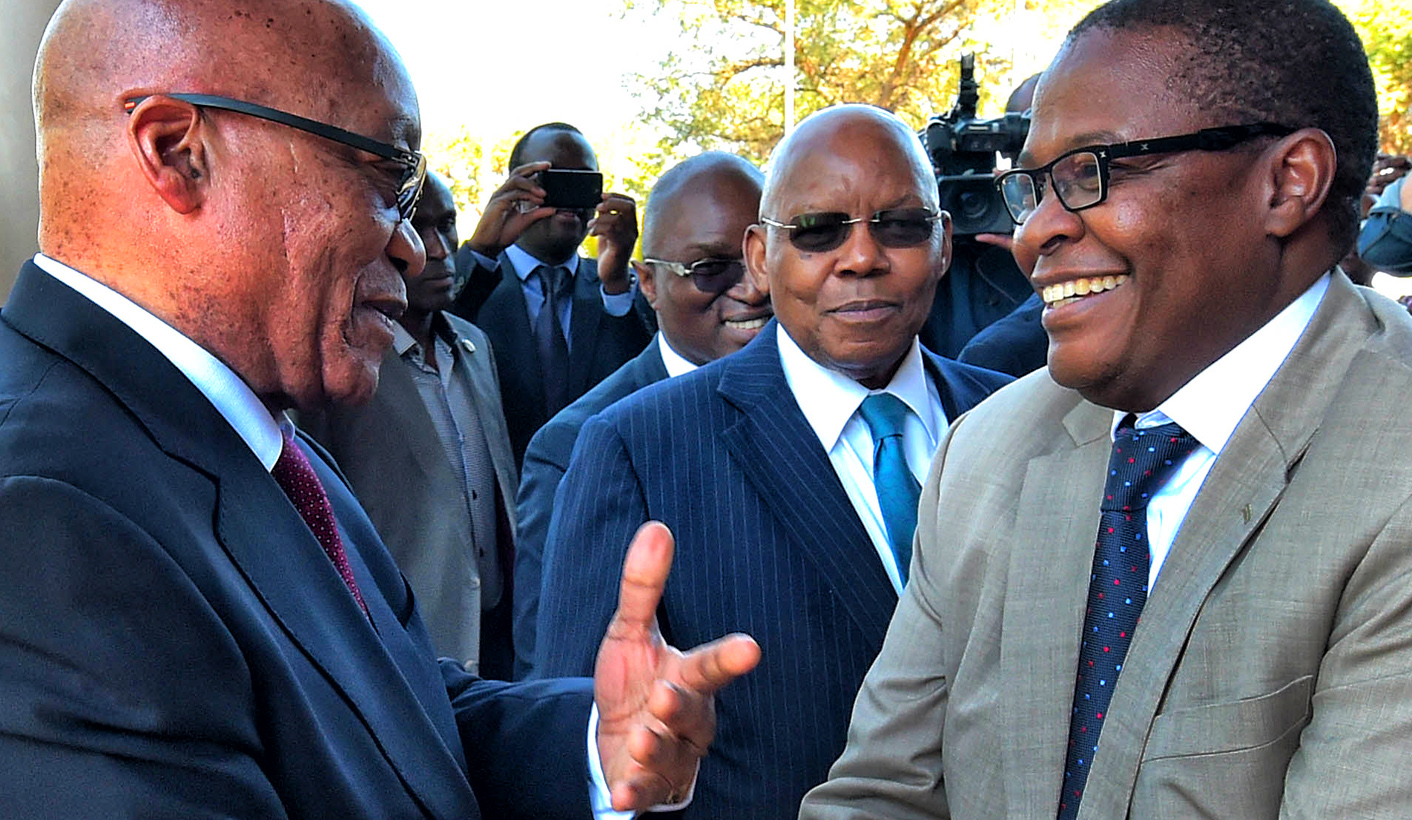 There are a number of people who ought to be squirming with embarrassment or shrinking in fear as their dealings with the Gupta family are being steadily exposed through a cache of e-mails in the possession of several media houses. From Cabinet ministers to self-declared activists against “white minority capital” to officials in state-owned enterprises, an assortment of skeletons are tumbling out of the cyberspace closet, revealing the network of gofers on the Gupta payroll. But nobody has been more willing to sacrifice his last shred of dignity on the Gupta altar than the hapless Brian Molefe, who recently danced his way back into Eskom only to be booted out on Wednesday. By RANJENI MUNUSAMY.

According to a City Press report on the tranche of leaked e-mails, the Gupta family’s opulent mansion in Dubai has 13 bathrooms. That many toilets must be a necessity considering the number of ANC leaders and high-ranking state officials filing through the hallowed halls, flushing away all sense of integrity and self-worth as they sell their souls and their country to their paymasters.

Details from the Gupta e-mails began oozing out from Sunday, revealing the possibility of President Jacob Zuma relocating to an Arab state, how ministers Mosebenzi Zwane, Des van Rooyen and Faith Muthambi are beholden to the Guptas, and the outstretched begging bowls of state capture’s frontline defenders Mzwanele Manyi and Andile Mngxitama.

In the midst of the sensational revelations, one person retains the title as the sucker-in-chief of the Gupta empire.

Eskom chief executive officer Brian Molefe was heavily implicated in the Public Protector’s State of Capture report, which revealed details of his relationship with the Gupta family, including his 58 phone calls with Ajay Gupta. The timeframe of the interaction coincided with the acquisition of the Optimum coal mine by the Gupta-owned Tegeta Exploration and Resources. There were serious questions about the financing of the Optimum deal, particularly Eskom’s pre-payment of over R600-million for coal it would get from Tegeta.

At the release of Eskom’s results in November, Molefe cried himself into the meme hall of fame, claiming that the former Public Protector, Thuli Madonsela, did not give him the opportunity to respond to the allegations stacked against him.

“The Public Protector has painted me with a corrupt brush… During this period my children will be told ‘your father is corrupt’‚” Molefe whimpered through his tears.

A few days later, Molefe did resign – or so we thought – claiming he was doing so “in the interests of Eskom and the public it serves”. There was much breast-beating in Molefe’s statement announcing his resignation.

“I wish to reiterate that this act is not an admission of wrongdoing on my part. It is rather what I feel to be the correct thing to do in the interests of the company and good corporate governance,” Molefe said.

“I am confident that‚ when the time comes‚ I will be able to show that I have done nothing wrong and that my name will be cleared. I shall dedicate myself to showing that an injustice has been done by the precipitate delivery of ‘observations’‚ following an incomplete investigation‚ which the former Public Protector has drawn back from calling ‘findings’. The truth will out.”

Molefe could have disappeared quietly after this, even with question marks over his head about his ties to the Gupta family. The South African public is extremely forgiving. In time he could have re-emerged in the private sector and moved on with his life.

Instead, as a devoted minion of the Gupta empire, he accepted their next deployment. It was clear that the ANC’s parliamentary list was doctored to allow Molefe to become a Member of Parliament and that this would cause disquiet in the party ranks. But Molefe had stars in his eyes, genuinely believing he would be the new minister or deputy minister of finance, and therefore took the plunge.

He had to cool off in the backbenches for a month, not really knowing how to relate with other ANC MPs and being regularly taunted by the opposition. Molefe’s self-worth was so low that he was willing to live with the label of being a Gupta stooge as long as he was rewarded with a minister or deputy minister post. At the same time, he was expecting a R30-million windfall as a pension payout from Eskom.

Molefe looked more of a desperate idiot when the Minister of Public Enterprises, Lynne Brown, vetoed his pension payout and ANC officials opposed his appointment as finance minister. Anyone else would have tried to re-establish their credibility after finding out that three of the ANC’s top six officials told Zuma he could appoint anyone else as finance minister except Molefe.

So Molefe did not get the job he was earmarked for by the Guptas and was destined for a miserable two years as a parliamentary backbencher. But, always being a sucker for punishment and ready to fling himself on the railway tracks for the Guptas, he decided to return to Eskom where he would once again be useful to the governing family. He did so without clarifying the terms under which he was returning or without informing the ANC that he was resigning as an MP.

Expecting protesters at the gates of Eskom’s headquarters, Megawatt Park, Molefe arrived at work in the early hours of the morning. He later danced with staff welcoming him back to the power utility and proudly declared:

“We must continue with our nuclear programmes to ensure that South Africa has electricity that meets growth.”

Securing the nuclear build programme was obviously his main assignment and Molefe genuinely believed he could slot back into his job unhindered to continue doing the Guptas’ bidding.

The full extent of the farce became apparent when he, Brown and Eskom board chairman Ben Ngubane had to file affidavits to respond to the Democratic Alliance’s high court application to have Molefe removed from his job. The three delivered a tangled web of gibberish, trying to explain that Molefe’s resignation was actually not a resignation but early retirement that had to be rescinded and that he was really just on unpaid leave when he was sworn in as an MP.

By that time the ANC had had enough of the fiasco and the officials called Brown to Luthuli House to put an end to it. Still Brown dragged the matter out, spouting more gobbledygook to explain how Molefe was still in the job. At the weekend’s ANC national executive committee meeting, even other Gupta minions could not defend Molefe’s reappointment at Eskom and he became the sacrificial lamb while Zuma’s hide was saved.

Although the writing was on the wall for Molefe, he returned to Parliament this week before the Standing Committee on Public Accounts to defend the Tegeta-Optimum deal, claiming nothing untoward had taken place. He told journalists that he was not worried about his fate.

“Whatever happens, happens,” he said.

On Wednesday, something did happen. After trying to kick the matter into touch, Brown was forced to instruct the Eskom board to rescind Molefe’s appointment after the inter-ministerial committee appointed by Zuma decided he should be cut loose.

“It will be in best interests in government, Eskom and the country that the Minister of Public Enterprises directs the board to rescind the appointment of Mr Molefe,” Justice Minister Michael Masutha said at a media briefing. He claimed “mistakes were made in good faith” in the handling of Molefe’s departure and reinstatement at Eskom and that these were in no way a reflection on Molefe’s capabilities.

Brown, who was seated next to Masutha, could not say whether Molefe would receive a payout or what decisions he had made in the time he had returned to Eskom. It was clear the rug had been pulled from under her and that there was nothing she could do to rescue the hapless Molefe.

But the wretched character that is Brian Molefe is apparently not done being castigated and humiliated. Without a shred of credibility left and still delusional that he can have a top spot in the Gupta empire, Molefe might still be ready for another deployment. Rumours flew on Wednesday that Molefe had been earmarked for the position of director-general of the National Treasury, which is vacant after the departure of the highly respected Lungisa Fuzile.

It probably would not matter to Molefe that such an appointment would also be widely opposed and that the Gupta empire was toxic with so much information leaking out. In whatever position he is next deployed to, Molefe believes that despite the utter humiliation he has been through, serving the Guptas will somehow redeem his image.

Perhaps Molefe is just too punch drunk to see how far he has fallen. Perhaps he is simply too delusional to realise he is just a tool of the Gupta network to amass wealth from the state. Or perhaps he is so stripped of his dignity that he just does what he is told to do, irrespective of the consequences.

Brian Molefe is one of state capture’s most tragic figures. He is living evidence of how the Guptas are able to hollow out a person’s soul and relegate them to a life of eternal ignominy. DM