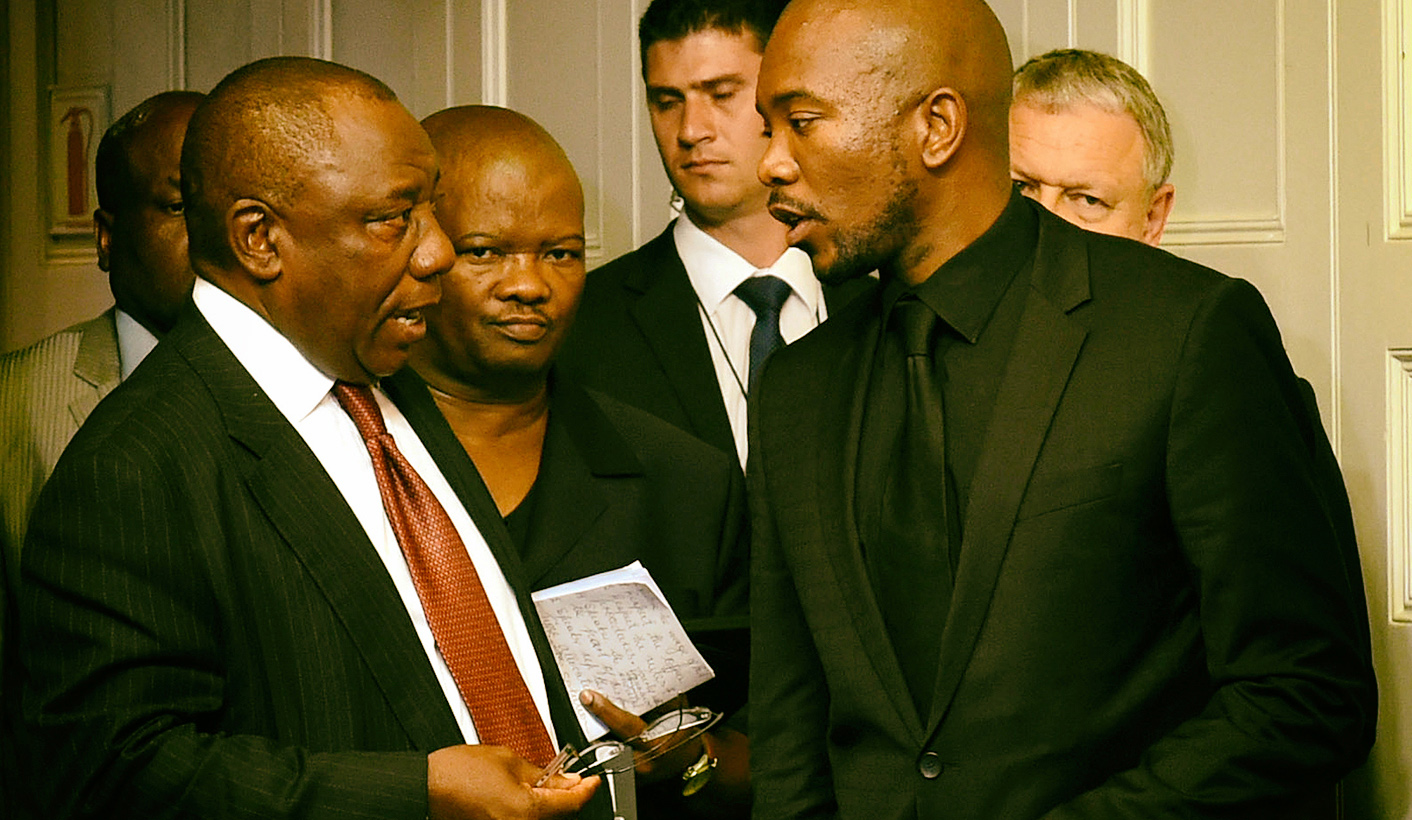 “President Gupta”. DA leader Mmusi Maimane’s comment got a quick reaction from National Assembly Speaker Baleka Mbete, who ordered him to withdraw: “In this House there is no president Gupta.” DA interjections that Maimane’s comment – “This is a budget for president Gupta” – was a reference to Atul and Ajay Gupta, held no sway. And eventually Maimane did withdraw. Wednesday’s budget vote debate really wasn’t about the rands and cents of the Presidency. In the noisy opposition politicking, it was Deputy President Cyril Ramaphosa who bucked the ANC line of mentioning OR Tambo, and instead paid tribute to ANC stalwart Walter Sisulu. By MARIANNE MERTEN.

President Jacob Zuma dislikes coming to the House where he is questioned and heckled and challenged over a series of personal scandals and those of his administration.

In his response to the 2016 Presidency budget vote, Zuma told National Assembly Speaker Baleka Mbete, who is also ANC national chairperson, to tackle disorder on the parliamentary benches. “I believe your House needs to do more to bring this House into order. I go around Africa and people ask me very embarrassing questions about this Parliament,” he said on 5 May, 2016.

It’s a theme he’d return to again on September 2016 after a particularly rough Q&A, which he is obliged to do once a parliamentary term. “Each time when I come here, I am abused by members of your Parliament, because instead of answering questions I sit here being called a criminal, a thief. I think this house must do something about it,” said Zuma on September 13, 2016.

And Zuma raised his concerns also in a community radio chat show in February this year, after a State of the Nation Address (SONA) that took place amid unprecedented security measures. “… As the president, who is treated in the manner I am in Parliament, I am going to write a letter to the Speaker to raise my issue in some detail. What has been allowed to continue in Parliament should not have been allowed… Parliament must do something about it. It is not helping, it is not giving a good picture to other countries,” Zuma told his listeners, according to News24.

Wednesday’s Presidency budget vote debate was never going to be easy. And it wasn’t helped by the so-called Gupta e-mails – since the Sunday Times and City Press published stories on them, more have emerged in the public domain – signalling a spider net of influence-peddling into senior civil service posts and a certain circle of politicians.

The rescinding of the rescinding of Brian Molefe’s early retirement to return as Eskom chief executive also didn’t help – no matter the inter-ministerial committee’s spin on good governance. The announcement on Molefe, who stepped down in the wake of the public protector’s State of Capture report in November 2016, came a couple of days after the ANC National Executive Committee (NEC) endorsed this, and an hour before Zuma’s opening of the Presidency budget vote debate.

The ANC NEC meeting also accepted a proposal for a commission of inquiry “into allegations of state capture without delay. The terms of reference of such commission of enquiry must be broad enough to uncover the influence of business on the state”, according to Monday’s official ANC NEC statement.

It is against this context that Zuma’s statement that neither he nor government as a whole was opposed to a commission of inquiry into what he called “‘said’ state capture”, as recommended in the November 2016 State of Capture report.

Said Zuma: “We fully support an inquiry as it will help to uncover the facts and remove rumours about the extent of capture.”

In an aside, quite a number of purple items of clothing were worn by MPs on both sides of the House. Purple, of course, being the colour of religious folks like those of the South African Council of Churches, which recently released a report of an “Unburdening Panel” to hear about state capture.

What emerged in Wednesday’s Presidency budget vote debate is that there appears to be some fuzzy strategic thinking in the Presidency. Zuma’s speech was more a box ticking exercise and appeared as if written by committee. It was in many ways a rerun of his State of the Nation Address, but shorter, and updated.

And so Zuma’s speech touched on his recent launches, like that of locomotives, and current concerns about violence against women – and of course, his ministers’ own budget vote speeches.

The president echoed the words of Police Minister Fikile Mbalula: “We urge women to report the perpetrators to the police”, before adding: “We also appeal to families to provide support to the survivors.”

“The plan is to phase in the services of the new service provider by November this year. This will give the agency enough time to ensure a seamless transition when the current contract comes to end in March 2018,” said Zuma.

“We plan to phase in the services of the new service provider by November this year. This will give us enough time to ensure a seamless transition when the current contract comes to end in March 2018.”

With a concerted ANC strategy to bring a flurry of points of order against Maimane to interrupt his flow – no other opposition speaker was thus targeted – ANC speakers largely remained on safe grounds, emphasising government achievements, with a few taking the usual digs at the DA as a party supposedly representing white elites.

Deputy President Cyril Ramaphosa took a different turn, subtly. The appeal was for a social compact, building partnerships, and bold, joint action. Unlike other ANC speakers in this, the officially declared year of OR Tambo, Ramaphosa paid tribute to ANC stalwart Walter Sisulu right at the start.

“Walter Sisulu was, by nature and by conviction, a unifier, a consensus builder… He worked throughout his life to draw together different people, sometimes with sharply differing views, into the service of one common cause – the liberation of the people of this country.”

Arguing that it was “imprinted in our DNA to work together”, Ramaphosa throughout emphasised “social compacting” to tackle the legacies of South Africa’s apartheid past – unemployment, poverty and inequality.

“Working together in various endeavours of social and economic interaction has become the new normal around the world. Leaders and policymakers who ignore this tried and tested approach to addressing and resolving problems do so at the peril of preventing societies from moving to higher levels of progress and development.”

Unlike Minister in the Presidency Jeff Radebe, who earlier rattled off statistics to underscore government’s achievements, Ramaphosa emphasised the human. On the eve of Youth Month he underscored successes of government programmes, be it community works or the Technical and Vocational Education and Training (TVET) colleges and university studies, to tell the success stories of five young women, four of whom were in the public gallery.

“Right now, our country needs solutions that will help us to renew and grow, but these solutions will only present themselves if we listen with our hearts to the cries and aspirations of our people,” said Ramaphosa, facing them. “We must dream, hope and build again.”

It would have been a calculated risk to deliver a forward-looking speech, summed up at the end with, “Let us be bold. Let us work together. Let us build a new social compact.” Whether this will backfire will emerge during the ANC presidential election campaign trail.

For now, it’s all eyes on Zuma and his response to the six-hour debate on the Presidency budget on Thursday. DM