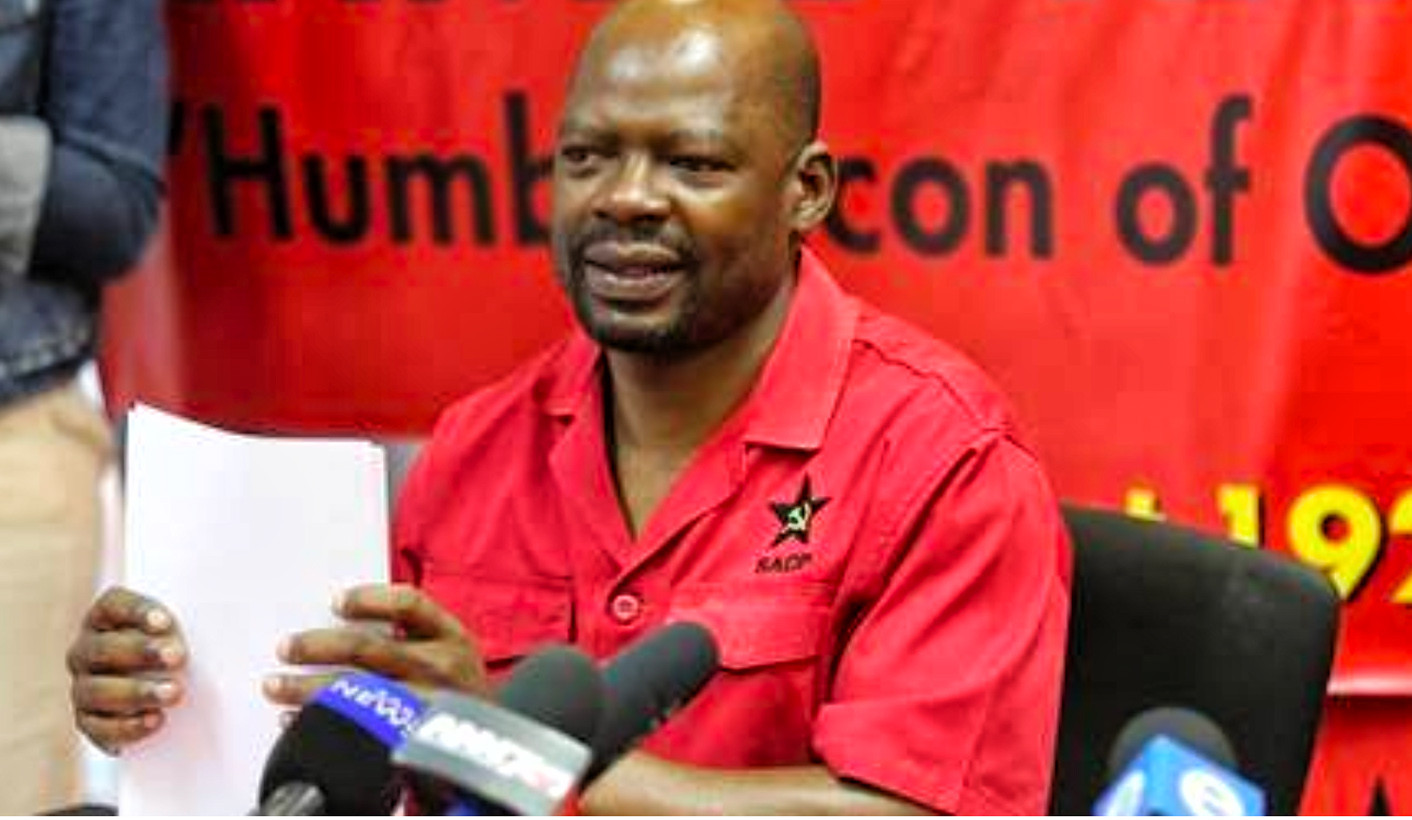 It’s ANC election time and that means opponents of the current system are under threat. The SACP’s Solly Mapaila on Tuesday said pro-Zuma supporters had threatened his family. By GREG NICOLSON.

Those defending President Jacob Zuma have allegedly turned from using debate to “threatening lives”. That’s what the SACP claimed on Tuesday after a protest at the house of the party’s second deputy general secretary, Solly Mapaila.

The SACP, which is in alliance with the ANC but has called for Zuma to resign, said Mapaila was threatened by the “MK Foundation” who were rallying as part of the “hands off Zuma” campaign. A case has already been opened with the SAPS and the communists suggested it was an orchestrated campaign to intimidate their leader.

Mapaila has been one of the most outspoken critics against the Gupta family, which is implicated in allegations of state capture against the president and his Cabinet. The family owns broadcaster ANN7, which the SACP said was at Mapaila’s house with the MK Foundation.

“This legacy of President Jacob Zuma, the so-called defence for Zuma, is no longer merely anti-intellectual and mediocre. It has become ugly, dangerous and life-threatening. The mischievous elements were clothed in the name of the ‘MK Foundation’ and accompanied by cameras from the Gupta-owned television ANN7,” said SACP spokesperson Alex Mashilo in a statement.

Mapaila on Tuesday said the issue was “emotional” and “too personal” to talk about and referred queries to his spokesperson. “This agenda won’t succeed, no doubt about it. We’ll defeat it,” he said.

Mashilo said Mapaila was at Cosatu’s Central Committee meeting when he was told one or two minibuses of protesters had arrived at his Johannesburg house. Mapaila went home immediately. Mashilo also rushed to the scene and said the demonstrators had “hands off Zuma” placards.

“People without notice went to his home. That is unacceptable. Why do you go to the house of a leader?” asked Mashilo. He said he wasn’t with Mapaila when the charges were laid and that they were waiting for a response from the SAPS to confirm which charges have been laid against protesters. “We consider what they did a threat,” said Mashilo. He said Mapaila’s security detail had already been increased, but he compared the incident to the DA’s march on Zuma’s Nkandla home. Alliance partners condemned that march and the president must condemn Tuesday’s demonstration.

SACP General Secretary Blade Nzimande has recently criticised the president and allegations of state capture, but while he has in the past appeared reluctant to stand against Zuma and the Guptas, Mapaila took a bold and public stance for the communists.

“President Zuma must be worried about this degenerating of the worst form and both distance himself and condemn the cowardly action. The SACP will hold responsible all those who were involved and in their name the shenanigans organised should anything happen to Cde Solly and his family,” said the SACP’s statement on Tuesday.

The Save South Africa campaign said in a statement, “It is no coincidence that the protest comes barely two days after Zuma was quoted as warning the ANC National Executive Committee that he should not be ‘pushed too far’ and that if people continued criticising him in public ‘they would see [what happens]’.”

Economic Freedom Fighter leader Julius Malema, the sage of SA politics, on Monday claimed in tweets that Mapaila was under threat because “the old man is not happy with him at all and anything is possible”. He suggested Mapaila was the only person Zuma had not been able to manipulate and had the president’s administration running scared.

It’s unclear who the “MK Foundation” protesting at Mapaila’s house represent. In a brief conversation on Tuesday, Umkhonto We Sizwe Military Veterans Association (MKMVA) leader Kebby Maphatsoe said, “MKMVA is not involved in that.” He claimed the MK Foundation is led by former veterans of MK. Former MK general Siphiwe Nyanda, however, said, “I know nothing of this MK Foundation.” He said it’s best to ask the ANC whether the group is recognised, but ANC spokesperson Zizi Kodwa couldn’t be reached for comment.

ANN7’s involvement in the protest at Mapaila’s home also remains in question. Editor-in-chief Moegsien Williams referred questions to managing editor Garry Naidoo, who didn’t respond to a request for comment. The SACP’s Mashilo said that shortly before he spoke to Daily Maverick, an ANN7 editor told him the broadcaster had been invited to the protest at Mapaila’s home like any other media organisation. Mashilo wouldn’t cast direct aspersions on the broadcaster, but no other media organisation was seen at the demonstration.

By Tuesday afternoon, ANN7 had not tweeted about or mentioned the protest on its website, but as Daily Maverick was speaking to Mashilo he said he was receiving calls from the broadcaster. ANN7 recently aired a “Treasury exposé”, claiming wrongdoing by former finance ministers Pravin Gordhan and Nhanhla Nene, both key critics on the Gupta family’s influence on the state. On Tuesday the network led with stories claiming recently appointed Finance Minister Malusi Gigaba would act on the claims.

The SACP’s belief that Mapaila’s life is under threat has a precedent. When the SACP leader addressed a Chris Hani commemoration last month, ANC delegates booed and heckled him and one member of the audience was caught on camera brandishing what looked like a pistol.

ANC MP Makhosi Khoza has said her life has been threatened after she expressed her doubts on the president and Human Settlements Minister Lindiwe Sisulu has reportedly received threats for being perceived to be against Zuma.

Their fears, and those of the SACP, are grounded in the ongoing political killings across the country, which mostly occur at municipal level. Police Minister Fikile Mbalula this week announced that a task team would investigate political killings, but it’s unclear whether the initiative will differ from his predecessor Nkosinathi Nhleko’s task team that failed to address the problem. DM