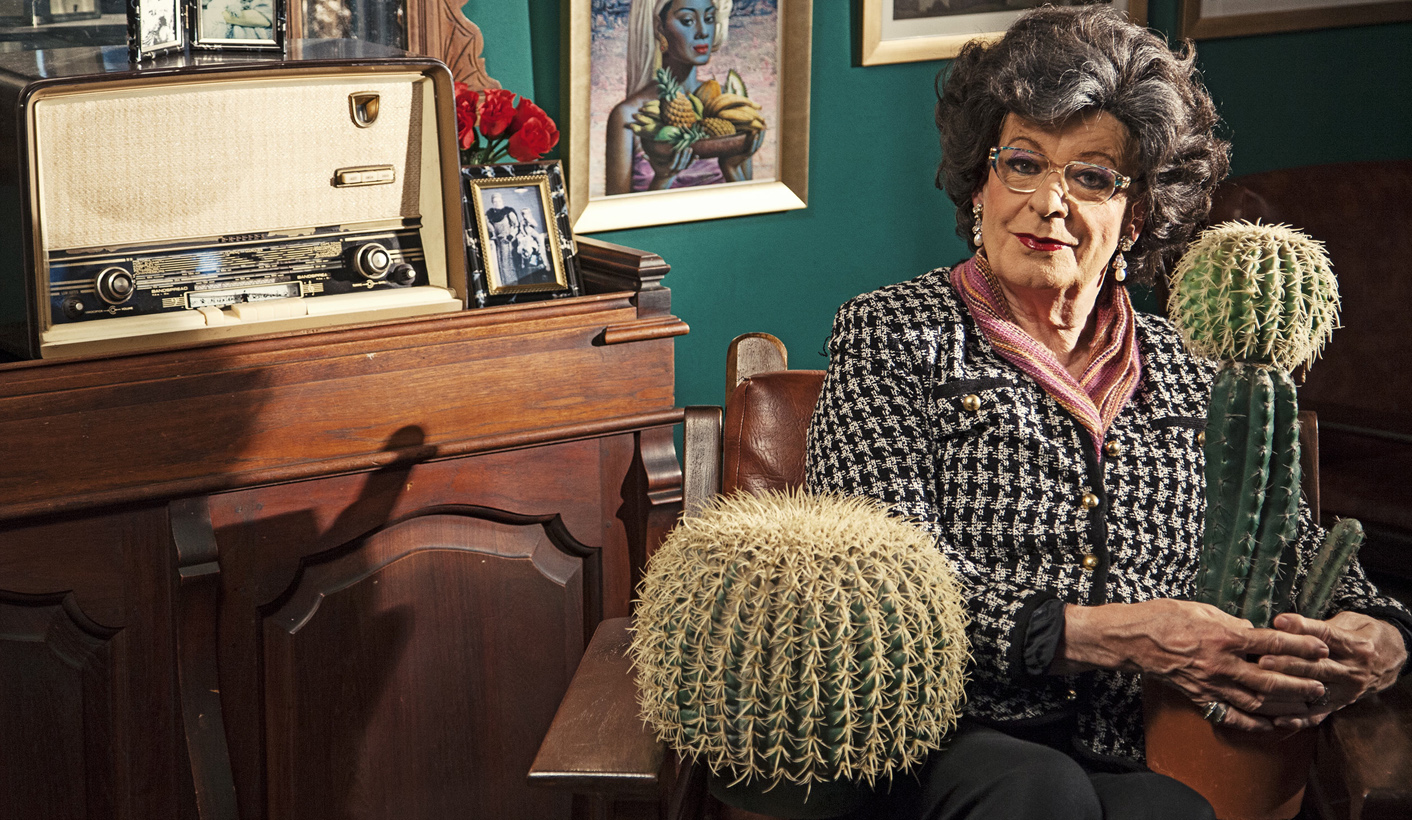 The latest performance by veteran satirist and activist Pieter-Dirk Uys is literally a show of two halves – if the first half doesn’t grab you, stick with it because it livens up considerably after the interval. By LESLEY STONES.

Pieter-Dirk Uys is back with his Evita Bezuidenhout character giving us another run through history and politics, in a format that’s carried him through for decades – dress as a white woman and get to say politically incorrect things, slap down or poke fun at parliamentary shenanigans and shine a light on corruption and incompetence.

It’s a familiar and now rather dated routine, firmly aimed at older white South Africans, or at least that’s the only crowd I imagine might appreciate it. And his loyal audience knows what to expect.

But if the first half doesn’t grab you, stick with it because it livens up considerably after the interval.

His last show, The Echo of a Noise, was a wonderful creation where Uys presented his candid self, not a character. Now he’s back to the usual format, and for me it’s not as interesting, powerful or touching as the genuine man behind the make-up.

His new show, Evita Bezuidenhout and The Kaktus of Separate Development, features much resting on the laurels of the past as this well-loved character recognised by Mandela and Archbishop Tutu. Well, why not, if you’ve had it, flaunt it.

The first half sees Evita on stage in front of the curtains with a couple of stepladders waiting for the delivery of the set. It’s coming from the ANC, of which she has become a card-carrying member, but of course it hasn’t arrived on time. In the second half there’s a plush office setting with a few props and pieces that weave into the show, and a script that’s considerably funnier.

How history has shaped who we are and where we are today certainly has an importance. But Kaktus is a rather long-winded, sometimes rambling affair. It’s a history lesson of colonialism dating back to 1652, passing through significant moments like the Battle of Blood River and trekking onwards into 1994.

It’s predominantly in English with generous scatterings of Afrikaans, which often got the best laughs for the incisive, surly way that language can sum up thoughts and ideas. A note from the audience at the interval requesting less Afrikaans because they didn’t understand it led to the wittiest part of the show, when Uys briefly interacted and ad-libbed with the crowd. He’s quick and sharp, and those off-the-cuff gems make Evita seem a little safe and dull in comparison, not talking enough about the present because she’s so rooted in the past.

Her heart is in entirely the right place, however, exhorting white South Africans to see the glass as half full, not half empty, and to stop bitchin’ and pitch in to make this country the success it ought to be.

Still, I’d like to see Uys return to the fearless days of being more savagely biting and less of a genial historian. DM

Evita Bezuidenhout and The Kaktus of Separate Development runs at Montecasino Theatre until June 11, then moves to Cape Town’s Theatre on the Bay from June 20 to July 1. Tickets from Computicket.