Book Extract: Buying the US presidency – the apartheid connection 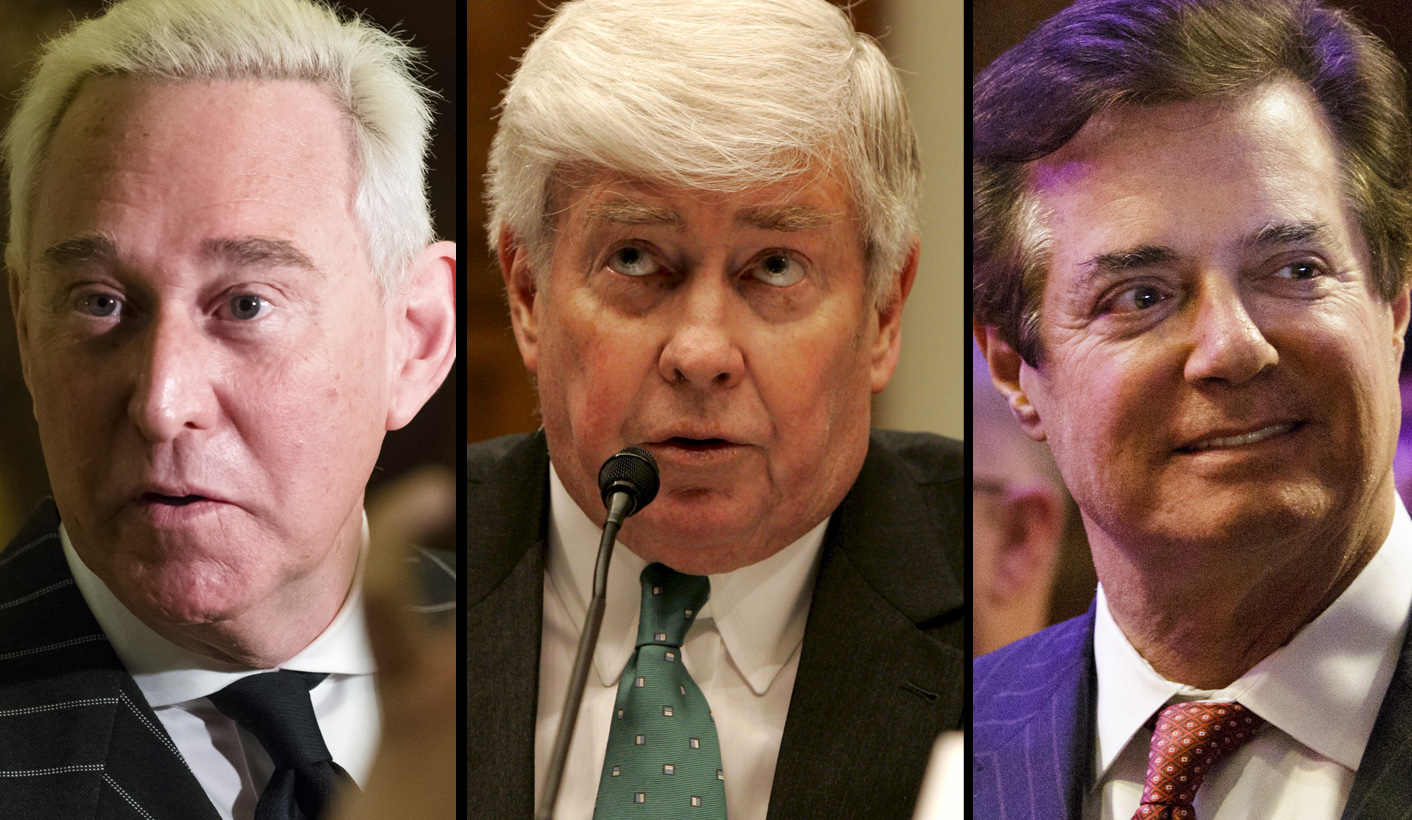 In this extract from Apartheid Guns and Money: A Tale of Profit, published by Jacana, HENNIE VAN VUUREN reveals a curious historical connection between close Trump acolytes, Roger Stone and Paul Manafort, and apartheid spies who were attempting to buy a US President. The story reveals continuities in deep state conservative networks that persist in the United States today.

The political agenda of President Donald Trump leans towards anti-science, and favours greater reliance on American police at home and on its military abroad. Above all, it is a throwback to a type of nationalism that never ends well. South Africa under Afrikaner nationalist rule is a prescient reminder that misplaced patriotism is the oxygen of prejudice.

A powerful link to US-South African relations of the 1980s is provided by Trump’s adviser for the past 30 years, Roger Stone, and Trump’s campaign manager during his 2016 presidential campaign, Paul Manafort. Just as Trump was sworn in at the White House in January 2017, the media revealed that the FBI, CIA and other law enforcement agencies were investigating both men for their alleged ties to the Russian government during the US election race.

Neither is a stranger to controversy, having been guns for hire by dubious corporations, conservative politicians and foreign governments. It’s an agenda that favours powerful corporations, a big military and reduced social spending. Lobbyists such as Manafort and Stone play two roles. They lead non-fact-based attacks on figures such as Hillary Clinton whom they demonise through any media available. At the same time, these trusted old boys work the backroom to raise cash for and from their favourite causes. This has undeniably made these men wealthy and influential in shaping the new right-wing populist politics in the United States.

Roger Stone’s reputation precedes him. Journalist Jacob Weisberg described Stone in 1985 as the “state-of-the-art Washington sleazeball”. Sporting what the New Yorker describes as “prohibition-era mobster” outfits, Stone identifies as a libertarian. Between his shoulder blades nestles a tattoo of scandal-ridden Richard Nixon’s face, complete with a broad smile.

During the 1980s Stone and Manafort were partners in the lobbying firm Black, Manafort, Stone & Kelly. They kept a client base that included two of the most infamous kleptocrats of the 20th century, Ferdinand Marcos, the president of the Philippines, and Mobutu Sese Seko, the president of Zaire. Both regimes also enjoyed the support of the Reagan and Bush administrations. Stone is reported to have remarked about these relationships, “If you look at all of our clients, they were all pro-Western, they were all pro-United States. They all had good relationships with Ronald Reagan and his administration.”

Another well-paying client of the lobby firm was the Unita rebel group of Jonas Savimbi. Unita paid Black, Manafort, Stone & Kelly $600,000 in 1987 to represent the group in Washington DC. However, as Ron Nixon contends, “It is likely that the money actually came from Pretoria.” This was money well spent and in return the firm set up an audience with Reagan for Savimbi in 1988 and again in 1989. According to Nixon, the firm lobbied US Congress members hard, setting up 500 meetings. They reportedly contributed to a decision by Reagan to turn on the taps of covert funding for Savimbi that had been shut by the Clark Amendment of the late 1970s. Jardo Muekalia, a former Unita fighter who now lives in the United States, told The Guardian in 2016 that the rebel fighters profited handsomely from their payment to the firm of lobbyists:

“We ended up getting up $40-million over a period over four years, so it was a pretty good return on that investment.”

An indirect and little understood link between Stone and the apartheid regime lies in one of the last big plays by Pretoria to influence US politics. In 1988 PW Botha’s government had hoped to buy itself a US president in Jack Kemp, the former professional gridiron footballer and congressman. Kemp would eventually lose the nomination, which went in favour of George Bush. Bush nevertheless appointed Kemp to his cabinet a year later as the secretary of housing and urban development. Kemp was later on Bob Dole’s ticket as vice-president as part of Dole’s unsuccessful bid for the White House in 1996.

Stone was Kemp’s senior adviser during his 1987-8 campaign and, since at least 1985, had been his “principal political adviser”, according to Kemp’s press secretary at the time. At one point in the 1980s, Kemp was Stone’s biggest client and his fortunes were said to be closely linked to those of Kemp. At that time, Kemp received covert funding from the apartheid regime. In 1996 the Mail & Guardian reported that the apartheid front organisation the International Freedom Foundation (IFF) had planned to buy Kemp a jet worth $450,000 using Military Intelligence funds in 1987. One of the backers of this scheme was the IFF South African operative Russel Crystal. Former apartheid spy Craig Williamson confirmed that in 1986 “the South African intelligence agents who ran the IFF from Johannesburg had expected automatic membership in Kemp’s ‘kitchen cabinet’ and hoped to name an assistant secretary of state for Africa in a future Kemp administration as a reward for providing the Republican senator’s campaign committee with a jet”.

After a WhatsApp inquiry to Williamson in January 2017, he told me that “there was talk of whether purchasing or leasing an aircraft was most effective. My objection to a purchase or lease was due to my doubt that the costs could be effectively hidden.” This much has been known for some time. At the time Kemp, who is now deceased, denied having received any advantage from the IFF. When asked for comment by the journalist Dele Olojede from Newsday he said, “I’ve made a lot of mistakes in my life, but that’s not one of them, tying myself to South African intelligence.”

Williamson now says that Kemp’s campaign was indeed assisted by South African Military Intelligence through the IFF: “Chartering on a when-required basis seemed a better way to go. I believe that some costs were covered.” This is an extraordinary admission and suggests that Kemp’s campaign did receive undeclared illicit funding from South Africa. When I asked Williamson if he knew of Stone or Manafort, he indicated that he knew of neither nor had any links with them. However, this raises the question: is it possible that Roger Stone, President Trump’s trusted adviser, knew about support from apartheid South Africa for Jack Kemp? Given his closeness to both Kemp and to Pretoria through the work he was being paid to do for its ally Unita, it would be surprising if he didn’t.

Stone and Manafort arguably represent continuity between the deep state networks that seek to subvert the US democratic process. They also represent the continuity of the political culture from Reagan to Trump. These are men who favour the interests of the rich and the type of clandestine conservative politics that threatens to engulf a democratic system in a swamp of insider dealing. It is often men who are most eager to swear allegiance to a flag who are easy picking as potential guns for hire by foreign, anti-democratic powers. DM