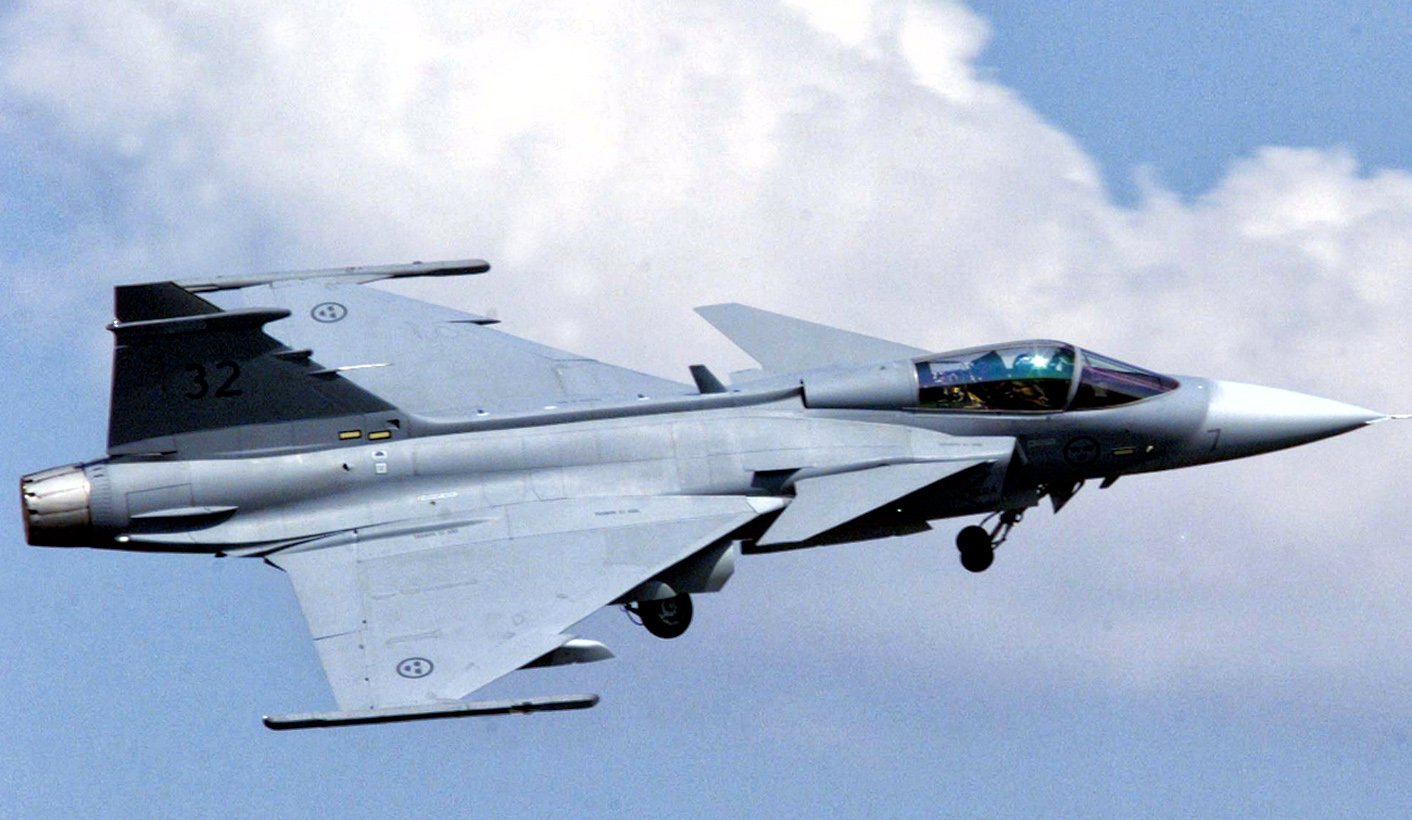 Following in the slipstream of politically connected attorney Ajay Sooklal's affidavit filed earlier this month in support of a high court application by Corruption Watch and Right2Know to have the findings of the Seriti Commission into the arms deal set aside, the Quaker Peace Centre has instituted a claim against the government to cancel the British Aerospace component of the Arms Deal and for the aircraft to be returned. The centre is wanting R35-billion to be paid back to the country’s fiscus as the deal is tainted by corruption and did not comply with legal procurement processes. By MARIANNE THAMM.

President Jacob Zuma took office with the stench of a corrupt arms deal lingering in the body politic. Now, as he approaches the end of his term of office, the malodorous cloud still lingers as applications are piling up to have the deal declared corrupt and illegal.

The Quaker Peace Centre has instituted a claim in the Pretoria High Court which it hopes will set a precedent and which concentrates on one of the biggest components of the arms deal, that with British Aerospace (Operations) limited (BAe). In terms of this part of the deal, Hawk and Gripen fighter jets were acquired at a cost of R35-billion (at 2015 currency exchange rates).

“Gripen fighter jets are manufactured in Sweden; however, in this instance BAe procured them for SA. The BAe transaction is assailed both because it is tainted by corruption and also because it is invalid for want of compliance with tender criteria laid down in the Constitution and because the loan taken to pay BAe was unauthorised,” said the Quaker Peace Centre.

The centre is a non-profit and public benefit organisation founded in 1987 by the Cape Western Monthly Meeting of the Religious Society of Friends (Quakers) in response to the then apartheid government’s repressive politics and in seeking to develop non-violent methods of resistance and problem solving.

Respondents in Quaker Peace Centre claim are the government of South Africa, Armscor, BAe, Barclays Bank PLC, Her Britannic Majesty’s Secretary of State and the Speaker of the House of Assembly. No relief is sought against BAe, Barclays, the UK Secretary of State or the Speaker of the House of Assembly, who have been joined because of their legal interest in the relief claimed.

The Quaker Peace Centre states that BAe won the contract for the Hawk and Gripen fighter aircraft (in partnership with Swedish defence group SAAB). When the US State Department in 2011 charged BAe with violating its arms export regulations through its unregulated and covert use of an offshore company (which operated with specific “intent to circumvent the normal payments reviews”) and middlemen all over the world, including in SA, BAe had settled, and had agreed to pay a penalty of $79-million rather than face these charges.

In 2010 BAe was fined $400-million after pleading guilty to knowingly and “wilfully failing to prevent and detect corruption and bribery in its operations, as well as conspiring to impede the related US investigations”. In addition, the UK’s Serious Fraud Office’s investigation of BAe’s use of agents and secret commissions worldwide, (including in South Africa) revealed that £103-million (that’s around R1.79-billion) was spent on covert payments.

The Quaker Peace Centre, on the basis of three independent causes of action, is seeking now to overturn the procurement agreement and ensure the return of all monies already expended to the South African National Fiscus.

“Two causes of action relate to the invalidity of the deal; the third relies on the deal being tainted by the corruption that attended its conclusion,” said the centre.

The first invalidity claim is based on a failure to comply with tender requirements of the Constitution and the second upon the lack of authority of the Minister of Finance to borrow money offshore to finance the deal. Should either of the invalidity claims succeed, the invalidity of the deal will involve returning the military hardware, with all money paid to date refunded, said the centre.

A cancellation due to bribery and corruption has a penalty provision that kicks in and which entitles South Africa to 5% of the purchase price of hardware as pre-estimated damages.

“In a country with amongst the highest levels of all forms of violence in the world (interpersonal, sexual, community), investing such huge amounts of money in an arms deal with such significant negative impacts is not only inappropriate but obscene. A society at peace with itself and its neighbours, and protecting the full range of rights provided for in our landmark Constitution, neither needs nor can afford such a deal.”

In his affidavit in support of CS and R2K, Sooklal, who acted as a consultant in the Arms Deal, revealed that President Zuma had met with him in August 2012 at his official residence Mahlamba Ndlopfu, and had asked him not to reveal what he knew to the Commission of Inquiry into allegations of Fraud, Corruption, Impropriety in the Strategic Defence Procurement Package – otherwise known as the Seriti Commission.

At that meeting Zuma allegedly told Sooklal, “My brother, I have appointed an arms deal commission to finally put to rest allegations of impropriety, bribery or corruption in the Defence Review Project. I request you not to inform the commission that the French were paying me monies over the years up to 2009.”

Sookal is seeking an order “declaring that a serious conflict of interest on the part of First Respondent [President Zuma] rendered his conduct in appointing a Commission of Inquiry into allegations of fraud, corruption, impropriety or irregularity in the Strategic Defence Procurement Package (SDPP) and which was promulgated in terms of Government Gazette No GNR926 of 4th November 2011 unlawful, invalid and accordingly unconstitutional”.

He is also seeking the setting aside of the findings of the commission, alternatively an order to reopen the commission and to receive evidence, including his as well as “any other evidence which may become necessary…”

In April 2016 the findings of the Seriti Commission were released and unsurprisingly found that there had been no evidence of corruption or wrongdoing during the 1999 arms procurement deal.

In 2015, Sooklal says he “felt duty-bound” to provide information to the Seriti Commission “which I thought would assist it in its deliberations”.

“I accordingly sent an e-mail to the commission indicating my willingness to testify… I did not receive a response to the e-mail. I was disappointed because pertinent relevant information had not been placed before the commission and also because I had not been given the opportunity to refute the allegations which had been made against me.”

The Quaker Peace Centre particulars of claim states that a portion of the bribes paid in the Arms Deal “the exact amount of which is unknown to the plaintiff” were paid over to or made available directly or indirectly for the ultimate benefit of the African National Congress to, inter alia, help fund its 1999 general election campaign.

It also sets out how, in September 2010, General Anwa Dramat, the then head of the Directorate of Priority Crime Investigation (DPCI), informed the Standing Committee on Public Accounts (Scopa) in the National Assembly that the documentation so seized was stored in 3 “Maersksized” shipping containers which contained 460 boxes of documents and 4.7-million computer pages.

The Procurement Agreement should also be cancelled “whether by negotiation, mediation, arbitration or litigation”. The Quaker Peace Centre would like the court to order that the costs of the suit should be paid by government and Armscor.

And finally, the biggie – it wants government and Armscor to return the aircraft to BAe against repayment of all amounts paid. DM