GroundUp: ‘We are fed up with promises, we have to take action’ 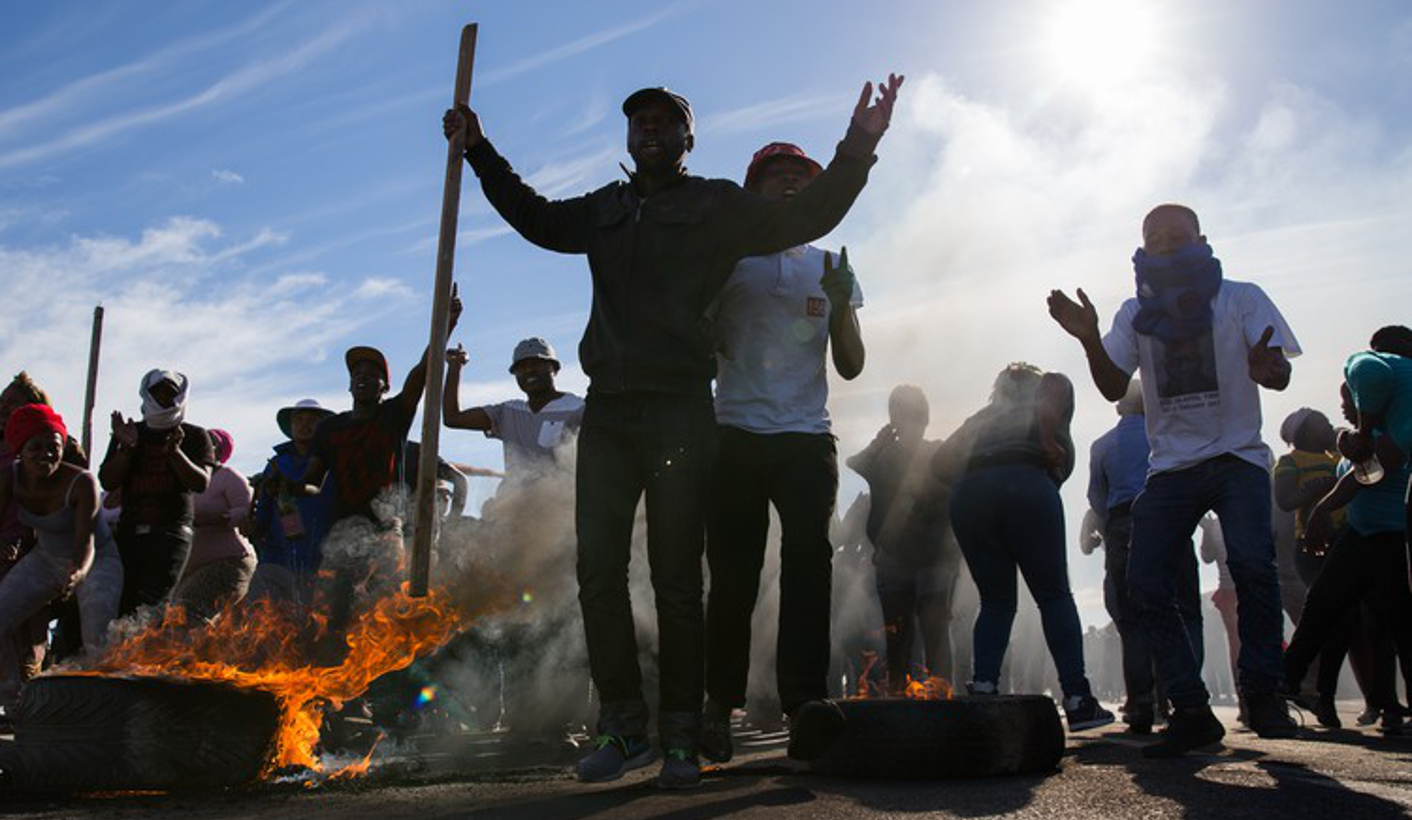 The biggest land occupation in Cape Town in recent years is taking place. This is what is behind it. By Ashleigh Furlong for GROUNDUP.

Tensions simmered in Khayelitsha on Tuesday as residents flouted interdicts preventing occupation of open land at a number of sites. The land occupations in Khayelitsha this past week are among the biggest in Cape Town in recent years.

“We are fed up with empty promises. We have to take action,” said Thando Mtombo, a backyarder in Town Two.

Many backyarders say they have lived their whole lives on someone else’s land and share a small space with numerous family members.

“People think we are criminals. We are not savages. We sacrificed work (to be here). But when we talk, we aren’t taken seriously,” he said.

On Monday, GroundUp witnessed occupiers negotiating with law enforcement. It appeared that a representative from the City had agreed that the Anti-Land Invasion Unit would not remove the handful of structures that were erected until a meeting between the City and residents had taken place on Tuesday.

However, when occupiers left the site of occupation to attend a meeting with the Khayelitsha Development Forum, councillors and police, their structures were torn down.

One of the pieces of open land is next to the Khayelitsha Magistrates’ Court. After lying empty for years, backyarders in Town Two began their occupation on 15 May, demarcating hundreds of sites on the wide expanse of land.

Zola Booi, a community leader from Makhaya, said that there were three occupations – one in Town Two, one in Makhaya and another in Kuyasa.

GroundUp has also been informed of a fourth site being occupied in Makhaza, but we have not been able to confirm this.

We asked the City on two separate occasions who owns the occupied land, but received no response to this question. But on Saturday, the City obtained an interdict against residents occupying the various pieces of land in Khayelitsha, which suggests it owns the land.

At the weekend, two Golden Arrow buses were torched and a MyCiti bus stoned, as tensions escalated following the repeated removal of structures.

The site alongside the Magistrates’ Court is possibly the most contentious site as it is meant to be developed for housing.

At least part of the land is specifically earmarked for gap housing, which usually caters for those earning more than R3,500 and less than R15,000 per month. Backyarders, who make up most of the occupiers, typically wouldn’t fall into this category.

The Khayelitsha Community Trust (KCT) is responsible for developing the occupied area in Town Two. In 2003, it signed a “land availability agreement” with the City, which according to KCT meant that “the rights for the development of all undeveloped land within the KBD (Khayelitsha Business District) precinct were allocated to KCT”.

In 2012, KCT submitted a request for proposals for a portion of the now occupied land to be developed for residential housing units. In addition, in a 2013 municipal notice the City states its intention to sell the land to KCT.

Despite this, the CEO of KCT Mkhululi Gaula said in a City Vision article that there have been delays in the release of the land from the City. He said that despite a Land Sale Agreement being signed, “the land transfer process has taken more than four years to be finalised”. The approximately 10-hectare land was to be sold at R200,000 per hectare in 2013.

At the meeting on Monday chaired by the KDF, Gaula said that the first phase of the project was meant to be the construction of 368 houses. “When we had a meeting with the community it was agreed that the houses to be built should be gap houses,” he said.

Sitonga said that KCT’s accusation that the City is stalling the project was not true. He said that KCT approached the City looking for money to construct infrastructure and that they received money from the Urban Settlements Development Grant (USDG).

“KCT accepted the money on condition that they build affordable low cost houses. KCT proceeded to put the infrastructure on the ground using the USDG funds,” Sitonga said. “Subsequently, KCT received a letter from the Khayelitsha Development Forum (KDF) saying that the people of Khayelitsha are not happy with the type of houses that will be built. The Board of KCT then changed the specifications of the houses to be built, which meant that they now no longer met the requirements for USDG funding.

Gaula added that National Deputy Minister of Human Settlements Zou Kota-Fredericks had also said that KCT was not supposed to return the money, because the money was a grant, not a loan.

The KDF hosted a meeting to discuss the land occupation. Photo: Ashraf Hendricks

When asked about KCT and KDF, community member Booi said that the residents didn’t know KDF or KCT, as these organisations had not consulted with them.

KDF chairperson Ndithini Tyhido said that KDF couldn’t associate with “criminality” (the land occupation). He said that KDF had no involvement in the occupation or in the land that was to be developed as they were a separate entity from KCT. He said that as much as he does “feel for the backyard dwellers” their “method” can “never be the correct” one.

He explained that they had called the meeting yesterday because the KDF was a “conduit of development in Khayelitsha”.

Councillor Xanthea Limberg, Mayoral Committee Member for Informal Settlements, Water and Waste Services and Energy, said that although they “empathise with the plight of our residents, we simply cannot allow the invasion of land”.

She said that after obtaining the interdict on Saturday night it was served on Sunday morning, “which is when the City’s Anti-Land invasion Unit started to clear the areas that were invaded”. DM