Anti-Corruption Task Team at Scopa: Under the shadow of invisible State Capture elephant 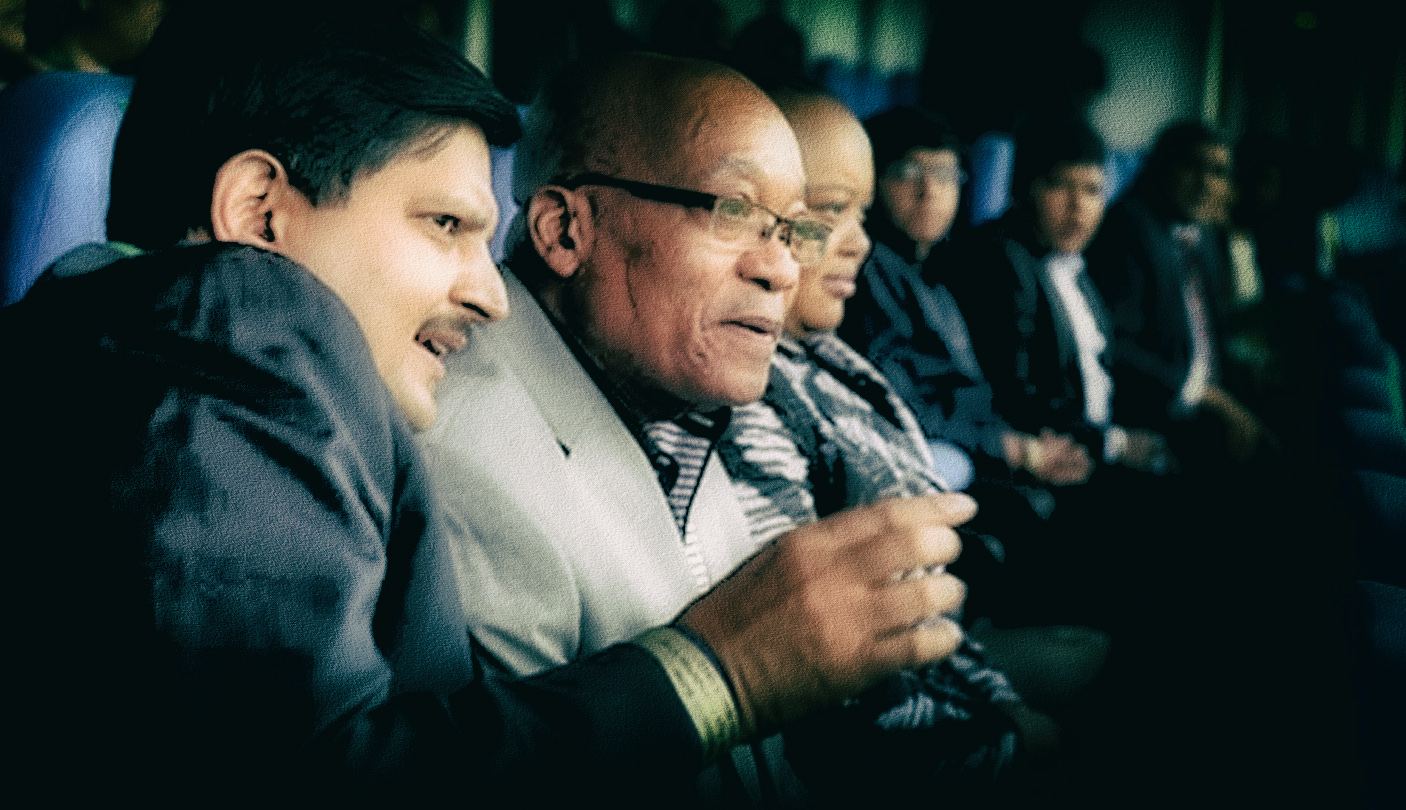 On Tuesday some of the most powerful people in South Africa, representing institutions tasked with combating rampant corruption which amounted to around R48-billion in 2014/15, gathered in the same room at the same time in Cape Town. The heads of the NPA, the Hawks, the FIC, SARS, the Attorney-General, the Department of Justice and IPID, who all form part of the Anti-Corruption Task Team, briefed Scopa on cases referred to them by various government departments. About an hour into the presentation ANC MP Mnyamezeli Booi called out the invisible elephants in the room – State Capture, President Jacob Zuma, and the Gupta Family. By MARIANNE THAMM.

At 09:00 on Tuesday in room V454 of the old Assembly Building where Parliament’s Standing Committee on Public accounts met for a briefing by the Anti-Corruption Task Team (ACTT) with regard to cases referred to the intergovernmental body by various government departments, only two lonely MPs faced what must rank as the most formidable collection of individuals in the country mandated with tackling endemic corruption.

The delegation was there to account to the committee as to whether they are, in fact, wielding the power invested in them to protect the citizens of the country from the venal and the self-serving and to determine whether the various entities that make up the ACTT actually had the appetite or the will to do so.

The ACTT delegation arrived early and well prepared, in marked contrast to their previous appearance at Scopa in September 2016 when Hawks head Mthandazo Ntlemeza delivered a shambolic and incoherent presentation. At that meeting, attended by Deputy National Director of Public Prosecutions, Nomgcobo Jiba (who has since been struck off the roll and who is currently on leave pending an appeal), only six of the ACTT’s 13 entities represented on the body were present.

Scopa, under the chair of African People’s Convention president, Themba Godi, is a muscular, well co-ordinated committee where ministers and other public representative usually face a thorough grilling with gas. Godi said on Tuesday that Scopa had decided that the fight against corruption “must find expression in Parliament as the centre of that fight because of our constitutional obligation and also because of our political obligation as representatives of the people”.

Opening the session, he quipped that the non-appearance or lateness of committee members on was “quite uncharacteristic… it certainly is not part of our culture”.

“I hope none of you have anything to do with it,” Godi said, glancing over at ACTT members, adding “but I know two of my members are sick and had to go to the doctor”.

In preparation for the presentation, Godi had tweeted that Scopa’s management committee had met on Monday with Matakata and Abrahams.

The ACTT, established in 2010, is a multi-departmental body aimed at fast-tracking high profile corruption cases. It is co-chaired by the heads of the Hawks and National Prosecuting Authority (NPA). One of its programmes is to “enforce accountability by, inter alia, ensuring enforcement of statutory and regulatory business, systems improvements, litigation where appropriate in order to recover government losses and also assist in preparation of criminal cases”.

Matakata said the DIRCO and Sanral investigations were “in progress” but that the Hawks were attempting to locate the complainant in the Military Veterans case. The Hawks had not yet been able to “engage” with SITA and the investigation into the Department of Basic Education would “proceed as soon as we have finalised how we take that matter forward between ourselves and the SIU”.

She added that investigations that were “in the public space” that the DPCI were investigating together with NPA dedicated prosecutors included PRASA, Nkandla, State Capture, as well as the irregular expenditure of R1.7-billion involving the Lepelle Northern Water Board in Limpopo.

“You must have confidence we are investigating these matters as the ACTT,” Matakata told committee members.

Abrahams added that on April 24 the NPA had received 64 lever arch files as part of the PRASA investigation and were “busy with a case plan”. He told committee members that there were seven legs to the “State Capture” investigation.

With regard to Nkandla, Abrahams said that there had been five referrals by the SIU and that the a Specialised Commercial Crimes Unit prosecutor had declined to prosecute four of these matters.

“I have requested the head of the SCCU to review those four cases. I was somewhat concerned that these matters can’t be looked at in isolation and had to be investigated as a collective. How can the investigation in the one matter be incomplete but a decision has already been made in the other four? So, I have requested a review those four cases… In addition to that, a number of criminal investigations were laid by various people across the country in respect of the Nkandla matter and I have requested the head of the SCCU to look at all these matters simultaneously and then make a decision,” said Abrahams.

Matakata presented statistics to the committee on the number of cases of serious corruption, the ones involving more than R5-million. She revealed that there had been 77 inquiries, 85 had been assigned case number, 37 were currently being heard in court and 55 had been finalised with sentences. Between 2014 and 2017, 91 people had been convicted of cases involving serious corruption. A total of 560 government officials had been convicted of corruption between 2014 and 2017.

It was during question time that the ANC’s Booi called out the elephants in the room, pointing out that the Gupta family and the matter of corruption seemed to play a central role within the matter of State Capture.

“What do you mean by State Capture and how do you quantify what you are bringing to us in this context? When we talk about R48-billion in irregular expenditure, and we look at your figures, they are not at a level where in the eyes of the public that is close to this and what the AG has provided… Is it difficult to arrest politicians?… In your work, have you ever heard of the Guptas or a case being laid against them? People are concerned about the rule of law,” said Booi.

Abrahams replied that he had never found it difficult to arrest anyone who had committed a crime and where there was a reasonable prospect of a successful prosecution. He said the State of Capture report had been referred to the NPA by the Public Protector and that he had referred the matter to the Specialised Commercial Crime Unit where a team of prosecutors were constituted to study the report and engage with relevant investigating authorities.

Financial Intelligence Centre head Murray Michell said that while the amendment of the FIC Act had suffered a long delay there was an acceleration of a roll-out process to give effect to a number of milestones that had to be met to ensure South Africa did not suffer any potential credit downgrades in future if these timelines were not met.

“We believe we will be able to do that. I am hoping that the Minister of Finance will make an announcement in the near future with regard to the details of that. A drafting process is taking place as well as consultation with the private sector, particularly large financial institutions, in order to make sure that the regulations to the new piece of legislation and the amendments fundamentally change the way we work.”

Michell said this would be so that the private sector could perform a role more efficiently and both assist the oversight of the financial sector as well as law enforcement authorities.

“Insofar as we are talking about ACTT, here the legalisation will hopefully make a direct impact. For example, one of the categories is it broadens the scope for a relationship between the FIC itself and categories such as the AG the SIU and the PP. So we are able to share information with them and vice versa they could make requests of the FIC that has not been historically possible.”

The new FIC act also made provision for a risk-based framework for the entire anti-money laundering framework which enabled institutions in the private sector and the state to identify risk and to apply that to the targeting of that risk.

“On the customer due diligence side there is the issue of prominent and important persons. We will all be under future scrutiny. Another issue is beneficial ownership, who is the natural person who owns companies and who have set up trusts, and again that will be of huge value in any investigative process,” said Michell.

Asked about the “painfully slow” investigation into President Zuma’s tax liabilities with regard to fringe benefits in relation to the Nkandla upgrades, the SARS Commissioner referred the question to SARS acting chief officer legal, Neo Tsholanku, who essentially said tax matters were confidential.

Asked later by the DA’s Mike Waters as to what the status was into the investigation into SARS second-in-command Jonas Makwakwa, Moyane replied that the investigation would soon be finalised and that an announcement would be made.

Waters asked Abrahams if he was “captured” and said that there was a “credibility gap” in perception in terms of current law enforcement agencies. These agencies, said Waters, had been accused of being captured and used in a “political chess game”.

Referring later to the extremely light sentences or fines received by government officials who had been convicted of corruption and who had robbed the state of billions, Godi said Scopa was “worried”.

“Scopa has noticed that individuals who have committed crimes of corruption get suspended sentences of three years or very low amounts of fines. Scopa believes that these individuals who rob the country of a lot of money, and who are the cause of the rot that is increasingly plaguing the country, should receive very harsh sentences to show that this country is serious about curbing corruption.”

He added that Scopa had always maintained that lack of consequences for those “doing wrongdoing with public money, particularly fraud and corruption, should face the wrath of the law”.

Scopa had committed itself to having regular engagements with the Anti-Corruption Task Team on a quarterly basis to receive feedback and to monitor the team’s work. DM

Photo: The New Age Board Chairman Atul Gupta and President Jacob Zuma and the First Lady MaNtuli Zuma at the T20 match between South Africa and India. South Africa. 30/03/2012. (GCIS)