Analysis: SARS official on trial for corruption was State Security spy. The question is, WHY? 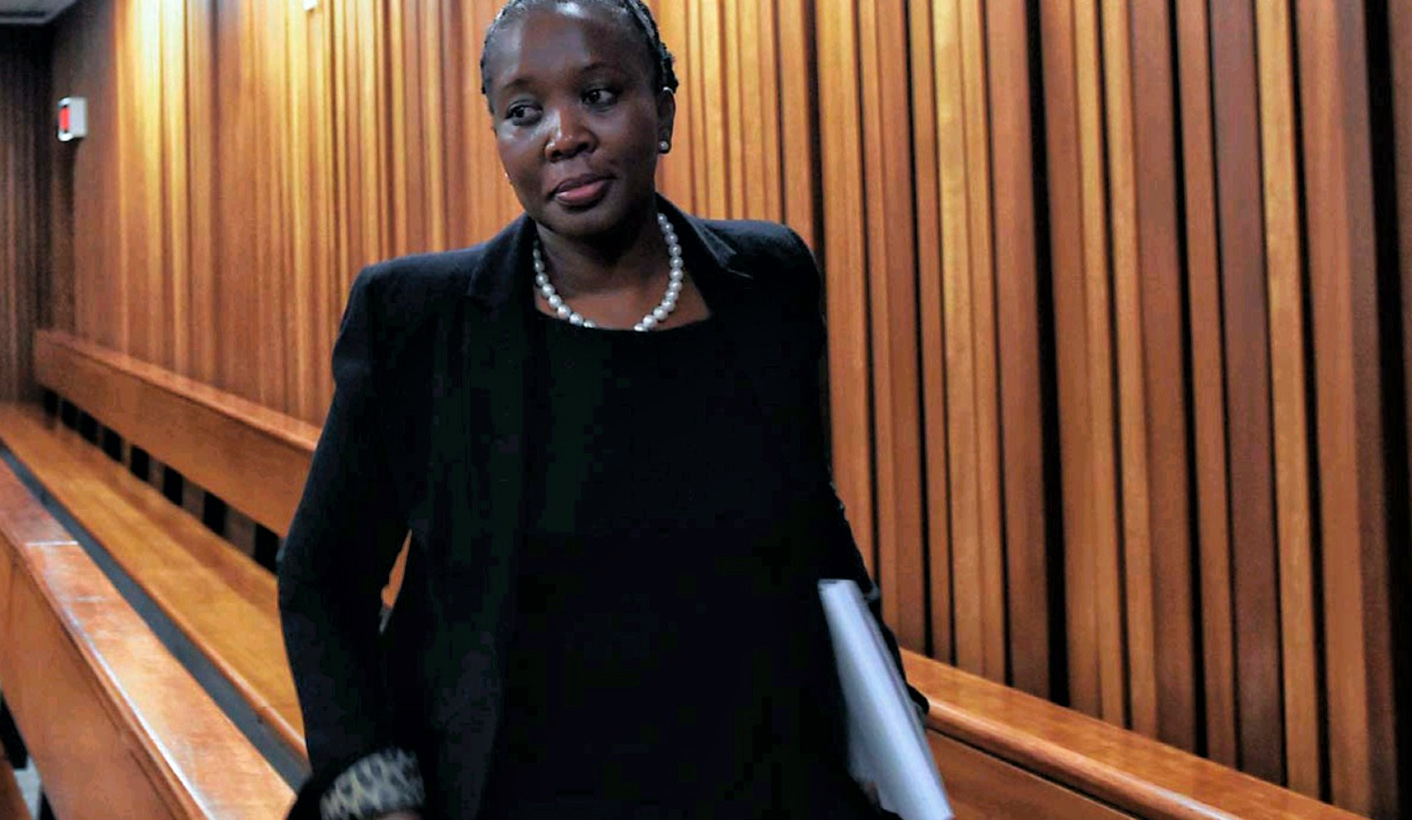 Evidence this week in a peculiar and long-running court case in the North Gauteng High Court involving the former head of the SARS risk management division, Mandisa Mokwena, revealed that she was receiving payment from the State Security Agency while an employee of SARS. Mokwena faces charges of racketeering, corruption and money laundering totalling R11-million. She is also a former business partner of First Lady Tobeka Madiba-Zuma. The questions that have not been answered are why State Security had an agent in SARS, whether she had declared her additional income, and whether it was taxed. Also, why didn’t she reveal, at the start, that payments into her bank account were from SSA. And might President Jacob Zuma have something to do with it all? By MARIANNE THAMM.

There are many deeply troubling questions that remain unanswered in the long-running court matter involving Mandisa Mokwena, former SARS Group Executive of Business Intelligence (later known as Risk And Segmentation), and five others on 58 charges of racketeering, corruption, money laundering and fraud, totalling R11-million.

Charges were brought in 2012 against Mokwena, her assistant Malati Reneilwe, former SARS cost management manager, Leslie Moonsamy, former Unisa professor Oludele Akinbode and his wife‚ Nancy Akinbode‚ former professor at University of Venda (Univen) Boateng Gyekye and businesswoman Boitumelo Boshego. The state has accused Mokwena of taking bribes totalling R1-million to ensure that her academic colleagues were contracted to provide research and training for SARS between 2007 and 2009.

Mokwena is accused of receiving over R1-million in cash in return for assistance with her doctoral studies at Venda University. She is also charged with facilitating an overpayment by SARS for the contracts to the academics. The state has alleged that Akinbode had deposited an amount of R600,000 into the bank account of Mokwena’s husband, Barnard Mokwena, to conceal her links to the academic. Akinbode previously told the court that the case against him had been fabricated by the “rogue unit”.

In 2016 City Press revealed that Barnard Mokwena, who was Lonmin’s human resources manager, and the top negotiator, during the August 2012 strikes that resulted in the Marikana massacre, was also a covert agent with the State Security Agency. It was Mokwena, the paper alleged, who had taken a “harsh stance” against striking workers. Evidence at the later Farlam Commission of Inquiry revealed that Barnard Mokwena had encouraged police to act strongly against the AMCU-aligned workers and that he had convinced fellow Lonmin executives not to negotiate with them.

On Monday Mokwena’s attorney, Stephen Joseph SC, informed the North Gauteng High court that his client, who was previously employed by the State Security Agency before she joined SARS, had remained on the books of the agency. He argued that the R1-million in bribes was in fact not this, but payment from SSA.

“What crime is that if the state agency employs and pays you?” Joseph reportedly asked the court.

But there are several alarm bells with regard to Mokwena’s covert life as a spy. SARS is one of the key government institutions that have been targeted by spooks and double agents and all of this in the context of the capture of the state by politically connected individuals. There would have been several high-powered and explosive investigations in the country at the time including the Scorpions probe into Jackie Selebi.

It was during this investigation that internal video surveillance cameras had been privately but legally installed by Scorpions head Gerrie Nel at the unit’s offices in Pretoria. A director of this company (while Gerrie Nel had been unaware of this at the time) was Andries “Skollie” Janse van Rensburg, a former intelligence operative who had headed the SARS National Research Group at the time. Van Rensburg resigned in 2008. The NRG was then renamed the High Risk Investigative Unit and Johann van Loggerenberg was appointed to succeed Van Rensburg.

It was Van Rensburg who gathered material from the NPA secret cameras in an attempt to sift for information in two sensitive Scorpions investigations – into Selebi and Jacob Zuma’s corruption probe.

It is this information that found its way back to Zuma’s legal camp and which resulted in the ultimate withdrawal of 783 charges of corruption which the High Court ordered in October 11, 2016 should be reinstated after a long-running challenge by the Democratic Alliance.

The NPA and President Zuma have appealed the ruling. On Tuesday NPA head Shaun Abrahams revealed to Scopa that the authority and the President would file their heads of argument by June 5 while the DA had until July 3. A date would then be set for the hearing.

Joining the dots and all that.

The fact is, however, the entire SARS executive, including former acting Commissioner Ivan Pillay, Group Executive Johann van Loggerenberg and Head of Strategic Planning Peter Richer, were all purged after spurious allegations that a “rogue unit” had operated within SARS. The allegations were originally made by SSA/British American Tobacco double agent, attorney Belinda Walter.

The “rogue unit” allegation was also unsuccessfully used by Hawks head Mthandazo Ntlemeza to hound former Minister of Finance Pravin Gordhan who was SARS commissioner between 1999 and 2009. It was current commissioner Tom Moyane, a close Zuma ally, who lodged a charge in March 2015 with regard to the so-called “rogue unit”, exposed initially in a series of articles that appeared in the Sunday Times.

A question that appears not to have been asked in Mokwena’s trial is why the National Intelligence Agency, later known as the State Security Agency, would employ a SARS Group Executive of Business Intelligence as a “deep cover agent”?

Mokwena has claimed that the cash payments were for work done for the agency – the training of foreign diplomats – while she was employed at SARS. Mokwena also alleged that she had been investigated by the “rogue” unit but this is untrue as she was, in fact, investigated by the head of SARS Anti-corruption and Security (ACAS), Clifford Collings.

Some of the more obvious questions are whether Mokwena had declared her SSA income for tax purposes and whether she declared her additional income to SARS as part of the annual declaration of interests all employees are required to submit.

Mokwena has also not cleared up whether her dual role was part of an agreement between SARS and NIA and did that exist at the time. Also, why, if the R1-million had been part of an income paid to her by the State Security Agency, did she not reveal this during the ACAS investigation.

Mokwena later became a business partner of First Lady, Tobeka Madiba Zuma, who claimed she had been unaware of Mokwena’s pending court case for corruption when they had registered three companies in March 2012. Mokwena had been introduced to Mrs Zuma by a fellow director, Lindani Sigxashe, and later resigned from her directorships when Mrs Zuma was made aware of the pending charges.

Was Mokwena still employed by the SSA when she went into the partnership with Mrs Zuma is another lingering question.

Further questions are who did Mokwena spy on while she was employed by SARS and are there civil servants in other departments who are also employed by the SSA in a covert capacity?

Joseph told the court on Monday that Mokwena’s only crime had been “that she went about her work diligently”.

So far, 43 witnesses have testified in Mokwena’s case. The court will hand down judgment in August. DM