TRAINSPOTTER: A Blooming shame – the healthcare screw-ups that have cost Gauteng a billion 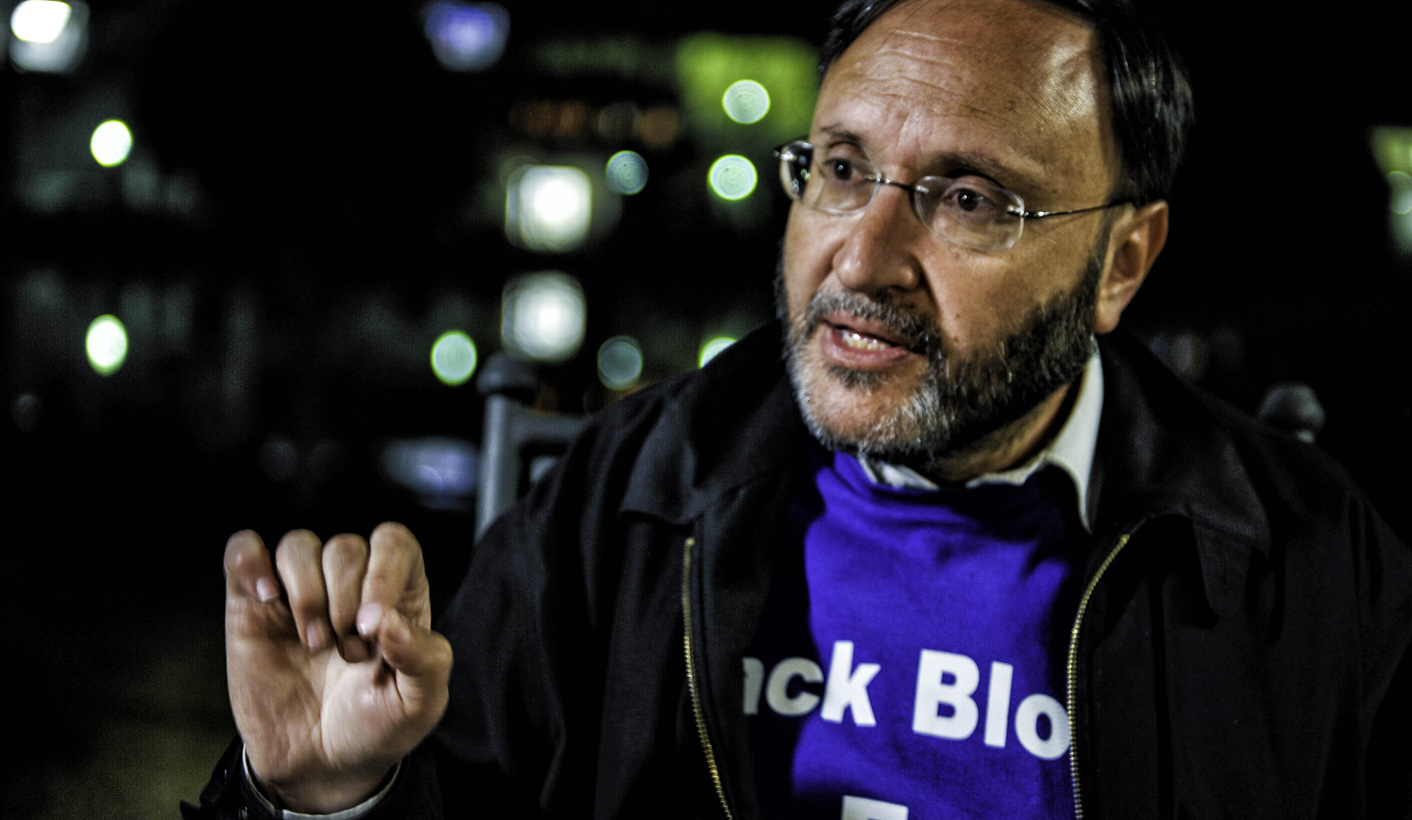 Want to get a sense of how bad public healthcare is in Gauteng, and by extension the rest of South Africa? Meet Democratic Alliance shadow health minister Jack Bloom, and his file-folder full of miserable, miserable numbers. By RICHARD POPLAK.

The Johannesburg Country Club, a swathe of unredistributed land in the shadow of Auckland Park, peddles a particular type of nostalgia, and in doing so functions as a perfect simulacrum of the present. The clubhouse smells of old soup and mouldering pith helmets, and while women appear to walk freely through the halls, let’s just say that the fairer sex doesn’t seem entirely at home in these surroundings. I tried to picture the grounds in a decade from now, radically transformed, the sloping lawns resplendent with mielies and cash crops destined for China. Not a chance. (After all, colonialism doesn’t die, it just gets endlessly rebranded.)

No one will ever farm anything here but a soggy French fry.

And so: the perfect place for a Democratic Alliance Media briefing! But we have not come to knock longtime DA stalwart Jack Bloom, but to praise him. This is because the shadow minister of health for Gauteng is by far the greatest living member of my tribe – the benighted Jews of Mzansi, scions of shoe cobblers and potato polishers who escaped certain death in the European charnel house only to land here and help build the apartheid death trap. (Crimes against humanity don’t die, they just get endlessly rebranded.)

But Jack – Jack is different. My volk did a poor job of manufacturing his ilk, a.k.a. solidly liberal-minded Jews with powerful social consciences, à la Helen Suzman. We were far better at producing mining start-ups, lawyers and the odd hardcore commie. But these days, there are even fewer Jack-types hitting the Shabbas table. We are, after all, in the late capitalist eat-or-be-eaten phase, and no one much cares about the lives of poor people. Except for Jack, that is. His politics have always been based on, and bolstered by, actual interactions with the most desperate humans in this country.

In 2015, Bloom published a book called 30 Nights in a Shack – a Politician’s Journey, which detailed his time sleeping in shacks with folks across Gauteng. His “journey” was elevated above poverty porn mostly because, in order to improve the lives of his constituents, Bloom has toiled within the Gauteng legislature for many years – a thankless gig by any measure, and one that raises him high above the NGO bleeding hearts because he goes to fewer fancy conferences. Indeed, according to an article in the Jewish Report, the experience impacted on him so profoundly that he became religiously observant, and even started praying with a Jewish wizard at a Chabad house in Savoy.

This fact should not be held against him.

I contend that Bloom’s work as shadow health minister will one day form the contents of muted epic poems sung by the creatures who will occupy this water-free land after we have long since died of thirst. Famously, he’s responsible for pushing in the Gauteng legislature to answer questions regarding the Life Esidimeni tragedy, and for helping to uncover the disgraceful, murderous litany of chaos that was perpetrated against this province’s most vulnerable citizens in order to chisel out a few extra bucks for luxury cars and trips abroad. In short: mentally handicapped patients, young and old, were moved out of Life Esidimeni facilities into shitty, unspeakably filthy “NGOs”, and as a result, about a hundred died in conditions unfit even for torture chambers. Qedani Mahlangu, the Gauteng health minister at the time, took the fall. But other than that, nobody has been charged, nobody has been fired, no relative has been paid compensation, and nobody can say exactly how many people died.

Black lives matter? Not in this country they don’t. Gauteng Premier David Makhura’s administration should have been wiped out following this spate of negligence-based mass murder: if this were a real “developmental state”, like our good friends the Chinese, everyone with even a tangential responsibility towards the victims would have faced the firing squad. Instead, Makhura is touted as one of the good guys, and will probably score a major leadership role in the Top Six should Cyril Ramaphosa’s cabal end up owning the ANC.

Meanwhile, in the Gauteng Health Department – the annual budget of which is R40-billion, favourable by comparison to any middle-income system in the world – people keep dying. Lots of them. Every single day.

Jack Bloom was not wearing his yarmulke – after all, Jews weren’t always so welcome at the Johannesburg Country Club, and perhaps this was a sartorial nod to historical mores. His media briefing had a title, and was accompanied by a PowerPoint light show called “The agony and misery of medical negligence”. It was not a happy occasion, but Bloom doesn’t tend to traffic in happy.

The point of the briefing, which took place in a small room with a balcony overlooking the grounds, was to show how many preventable fuck-ups occur in the Gauteng medical system, how much money these fuck-ups cost taxpayers, and how much real trauma the fuck-ups dispense into the communities the department is supposed to serve.

To start with, behold the following figure: since January 2015, R1.017-billion has been paid out to settle 185 medical negligence claims. Every single one of those claims was contested, which means that the department had to incur legal fees and other related costs. The department is perennially broke, and so they pay late, are usually forced to face off against a sheriff of the court, and are charged interest – a stupid tax on their own stupidity, if you will.

“And yet,” said Bloom, who stood at a staid podium wearing a staid suit in front of a DA banner, “despite having paid out so much money, and having caused so much damage, not a single health official has actually faced any consequences for this disastrous outcome.”

Digging into the stats just made things worse. Most cases, according to Bloom’s analysis, came out of Soweto’s Chris Hani Baragwanath Hospital, and most of those out of the maternity ward – 44 acts of negligence costing the department a staggering R514-million. “Something is dreadfully wrong with the maternity ward at Chris Hani,” said Bloom, perhaps unnecessarily. Reasons? It could be that with more than 20,000 births a year, Bara is just too busy; it could be that more cases are brought to the fore because committed ambulance chasers lurk around the wards waiting for trouble; it could be the fact that the institution’s CEO hasn’t been replaced since January of last year; it could be because there’s a countrywide shortage of obstetricians due to massively high indemnity insurance. No one knows.

“But with that budget, surely they can get it right?” asked Bloom.

It appears that they cannot, and not just in Bara. In one particular case, almost R30-million was paid out for a baby who “fell on its head” at Natalspruit Hospital – as Bloom pointed out, a pittance for the lifetime care of a human with a lifelong mental handicap. In South Africa, injuries that result in handicaps have much larger payouts than death, because the courts award costs based on the lifetime consequences of the injuries. But still, R260,000 awarded for the preventable death of a baby AND a mother at Pholosong Hospital? In what universe would this appear just?

“It’s a long and sad catalogue of injuries caused against patients at our hospitals,” said Bloom of his sick-making presentation.

And it’s getting worse. At this point, Bloom put his hand to his forehead and winced, as if he was undergoing a prostate examination undertaken by an intern with cold fingers. The potential claims sloshing about the legal system amount to a horrific R13.5-billion, nearly 40% of the annual Gauteng health budget. This money should be going to primary healthcare, Bloom noted, not to mopping up the mess.

“And I would say this is the tip of the iceberg,” he said. ‘We have a large budget, and we can’t give people proper healthcare.”

And yet, according to Gauteng Health MEC Gwen Ramokgopa, no disciplinary action has been taken. Nor can this be laid on the gurneys of healthcare professionals themselves. Doctors and nurses in the public system are under enormous, illegal amounts of strain – think of them as saints with syringes.

Yes, there are those who are genuinely unfit for the job, and it is up to management, appointed by the ministry, to lean on the unions and relieve them of their obligations. (Even SAA gets this right: imagine a pilot who flies just fine, but hasn’t quite got a handle on landing.) In this, Eskom’s unresignable, unfireable CEO, Brian Molefe, isn’t an anomaly in South Africa – he’s the most perfect example of the pathology. In Gauteng alone, the system has had to pay out for 50 cases of cerebral palsy or brain damage in infants; seven cases of blindness; 14 deaths of baby and mother; eight faulty amputations; one case of amputation without consent; and R41,252.15 awarded to a patient after a midwife left a cleaning pad inside her. All preventable. None excusable. No punishment exacted on anyone – except the taxpayer.

And this is Gauteng, the fourth biggest economy in Africa, the richest province by far in the country. Imagine North West, or Limpopo.

“It’s agony, misery, and it needs to stop,” said Bloom.

In this, perhaps the Johannesburg Country Club was the perfect place for such a presentation. Here we were in the colonial time warp, the old system not dead but simply rebranded, and old Jack Bloom wielding a file folder of numbers that calculated an algorithm of failure. Those who give birth and undergo routine procedures in VIP private health clinics know none of this trouble. Those in the public system bear the brunt of a state that has little interest in serving its citizens.

Same as it ever was. DM