Op-Ed: The descent of Jacob Zuma in 31 steps and counting 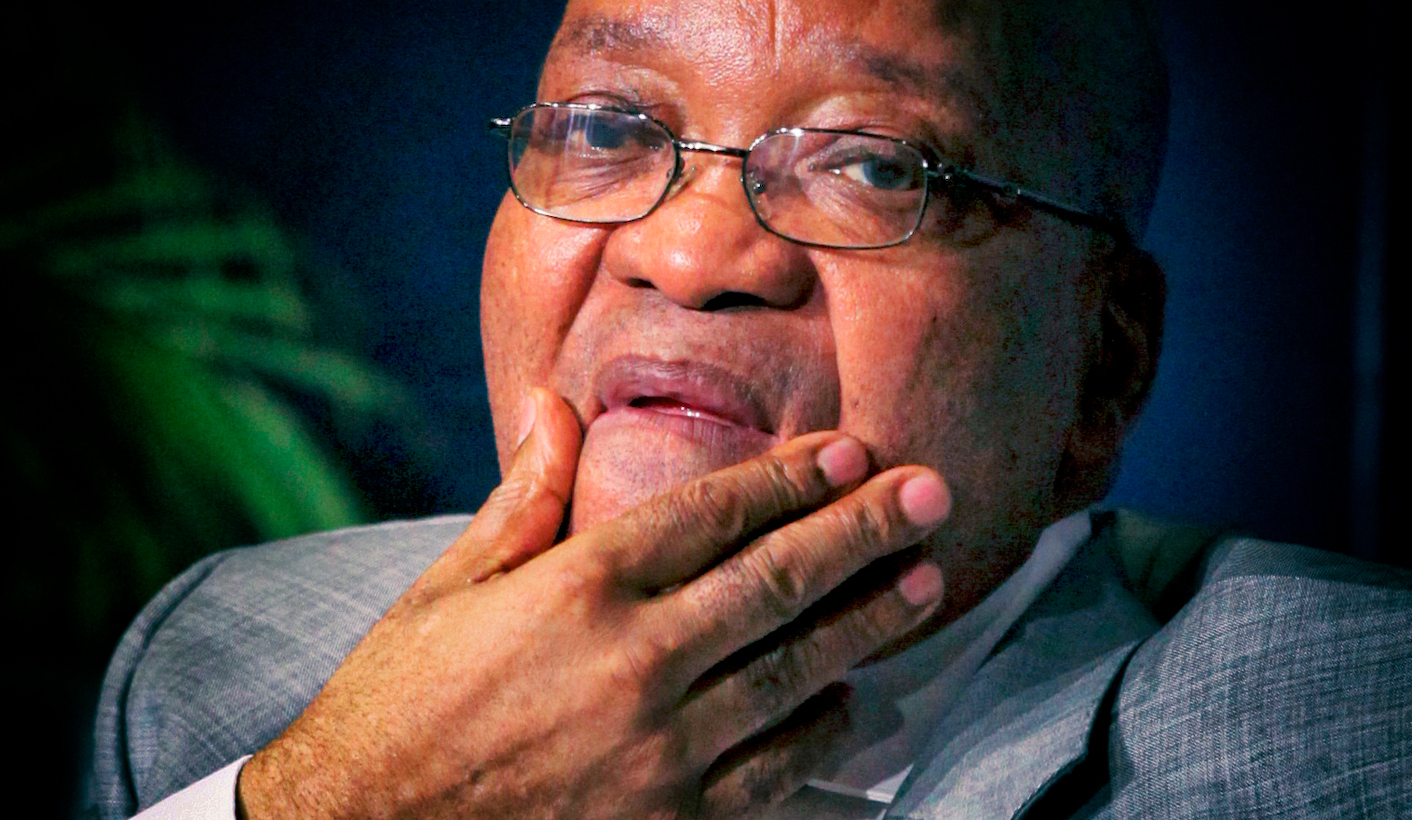 Last week, the Constitutional Court heard arguments that Parliament should either allow for, or be ordered to conduct, a secret ballot when MPs are voting in a motion of no confidence against President Jacob Zuma. The hearing came after a weekend of storms covered large parts of the country, marking the start of winter. By contrast the President’s winter started way before the end of summer. He now seems enmeshed in a hurricane of discontent. By KAVISHA PILLAY and MARK HEYWOOD.

Below is a timeline of exactly two months and 31 significant developments leading up to and shortly after the court hearing. It shows how the President and his cronies have been taking punches from all corners, with groups from every sector of society – including the ANC itself – now calling on the President to step down amidst allegations of corruption and state capture. The space for looting the state appears to be closing. The fight back against state capture is well under way. But with the pace of politics accelerating it won’t be over until either Parliament or the ANC itself removes Zuma and his associates from office.

17 March: The Constitutional Court rules that the South African Social Security Agency (Sassa) and Cash Paymaster Services (CPS) are under constitutional obligation to continue to pay social grants until another entity is able to do so. The contract with CPS was due to expire at the end of March, however, the court ruled that CPS’s contract must be extended for a further 12 months, with the suspension of the invalidity of the contract extended. The court criticised the conduct of Sassa and Social Development Minister, Bathabile Dlamini, for allowing this situation to happen.

On the same day, the High Court in Pretoria rules that the appointment of head of the Hawks, Berning Ntlemeza, was unlawful and therefore invalid.

27 March: Zuma orders former Finance Minister, Pravin Gordhan, and Director General of the Treasury, Lungisa Fuzile, to return from an investor roadshow in London. Claims of an intelligence report begin to surface as the reason for the recall.

29 March: At Kathrada’s funeral, the South African Communist Party (SACP) and former President Kgalema Motlanthe call for ethical and responsible leadership. Extracts were read from a letter written by “Uncle Kathy” calling on Zuma to step down. Zuma was asked by the Kathrada family to not attend the funeral.

30 March: In what has been deemed “the night of the long knives”, Zuma undertakes a major Cabinet reshuffle in which many ministers including Pravin Gordhan and his deputy, Mcebisi Jonas, are fired from their positions as the heads of Treasury. Earlier in the day, the EFF approached the Constitutional Court to force the Speaker of Parliament, Baleka Mbete, to institute impeachment or disciplinary proceedings against Zuma.

31 March: Save South Africa calls on the public to #OccupyTreasury and voice their distaste at the Cabinet reshuffle. ANC Secretary General, Gwede Mantashe, and ANC Chief Whip in Parliament, Jackson Mthembu, express dissatisfaction at the firing of Gordhan.  Opposition parties urge Baleka Mbete, to reconvene Parliament from its recess and table a motion of no confidence in Zuma. The SACP issues a public statement and calls for Zuma to step down, saying that the President has plunged the nation into “deep crisis”.

1 April: Deputy President, Cyril Ramaphosa, objects to the cabinet reshuffle calling it “totally unacceptable” for Zuma to fire Gordhan based on a flimsy intelligence report. Ramaphosa stated that the top six leaders were not consulted on the reshuffle, instead they were informed about the decision. ANC Treasurer-General, Zweli Mkhize, issues a press statement noting that “unlike previous consultations which take place with senior officials of the ANC during such appointments‚ and changes to the composition of the national executive‚ the briefing by the President left a distinct impression that the ANC is no longer the centre and thus depriving the leadership collective of its responsibility to advise politically on executive matters”.

4 April: Cosatu calls on Zuma to resign. The trade union federation noted that it no longer believes in the leadership abilities of the President. ANC stalwarts and veterans also call for Zuma to step down.  Leaders in the top six call for an extended ANC National Working Committee (NWC) meeting to discuss the cabinet reshuffle.

5 April: The ANC reveals the outcomes of its NWC meeting and notes that it accepts, as an explanation for the reshuffle, that the relationship between Zuma and Gordhan had irretrievably broken down.

7 April: The Save South Africa campaign mobilises approximately 60,000 people to march to the Union Buildings in Pretoria, and about 100,000 people in Cape Town in a march to Parliament. A second ratings agency, Fitch, downgrades South Africa’s credit rating to “junk status.”

10 April: Zuma responds to calls for him to resign at the memorial service of Chris Hani by trying to smear marchers as racist. He claims: “There is a resurgence of racism in our country. It is also clear that racists have become more emboldened. The marches that took place last week demonstrated that racism is real and exists in our country.” The UDM files an urgent application in the Constitutional Court asking that the motion of no confidence be decided by secret ballot.

10 April: The High Court overturns the Minister of Transports’ decision to fire the Board of PRASA and orders its reinstatement.

12 April: Opposition parties unite and march to the Union Buildings in Pretoria calling for the removal of Zuma. It is estimated that over 100,000 people marched in the National Day of Action. PR agency, Bell Pottinger, cuts ties with Gupta-owned Oakbay Investments after reports surfaced that the agency was stoking racial tensions in media campaigns to support narratives that are pro-Zuma and the Gupta family. On the evening of a bad day, Zuma’s birthday bash, shows his isolation when it is avoided by other members of the ANC’s top six, the ANC’s Gauteng leadership and the SACP. It becomes a feast of robbers. Police Minister Fikile Mbalula announces that he will withdraw the appeal against the ruling on the invalidity of the appointment of Berning Ntlemeza.

16 April: Activists from the Johannesburg Against Injustice (JAI) organisation protest outside a Gupta Family religious event and clash with members from the Black First Land First (BLF) group.

23 April: In a press statement,  the ANC slams the “climate of intimidation” against the media. The ruling party noted with concern that: “threats made against individuals because of their political or ideological beliefs is indicative of intellectual and moral bankruptcy”.

25 April: The DA files an urgent application with the North Gauteng High Court seeking to force Zuma to supply reasons for his executive decision for the cabinet reshuffle.

1 May: In an unprecedented development Zuma, as well as Mbete and ANC Deputy Secretary General, Jessie Duarte, are booed at major Cosatu Workers Day rallies across the country. Cosatu’s main rally, where Zuma was due to speak, is called off without any speeches.

3 May: The ANC dismisses reports by Gupta-owned news channel, ANN7, following claims that some of the party’s top six leaders had pushed Zuma to attend Cosatu’s Workers Day rally. The ruling party accused ANN7 of being “a mouthpiece of the factional divisions” in the party, saying that the news channel had consistently showed itself as being intent on “driving wedges” and pitting ANC leaders against each other.

4 May: The North Gauteng High Court rules that Zuma must submit all documents containing his reasons for dismissing Gordhan and Jonas.

5 May: Former presidents of South Africa, including Thabo Mbeki, Kgalema Motlanthe and Phumzile Mlambo Ngcuka make clear their support of calls for Zuma to go when they engage in a national dialogue around the political and economic crisis facing South Africa.

10 May: Zuma files an application to appeal the North Gauteng High Court’s decision that he submit the record and reasons for his cabinet reshuffle.

12 May: Brian Molefe is reappointed as CEO of Eskom. In a press statement, the ANC noted with concern that the decision to reinstate Molefe without the observations of the Public Protector’s State of Capture report having been conclusively dealt with was “tone deaf to the South African public’s absolute exasperation and anger” over matters of corruption.

14 May: Activists from the Save South Africa campaign stage a night vigil outside the Constitutional Court in anticipation of the court hearing on the use of a secret ballot in the Parliamentary vote of no confidence against Zuma.

15 May: Political parties and civil society organisations mobilise and march to the Constitutional Court and note that the use of a secret ballot will protect South Africa’s Constitution and prevent MPs from being intimidated. The ANC in KwaZulu-Natal protest in Durban in what they claim is “judicial overreach”. The march follows the ruling by Judge Bashir Vally that Zuma provide reasons for his cabinet reshuffle.

18 May: The SACC publishes the report of its “Unburdening panel” declaring that the government  “has lost its moral legitimacy.” It promises to write a “pastoral letter” to millions of its congregants about state capture.

23 May: The public enterprise Parliamentary committee questions Minister Lynne Brown and the Eskom board over the reinstatement of Brian Molefe as CEO. In response, the ANC noted that Eskom’s response to Parliament’s questions on Molefe’s reinstatement is disingenuous and amounts to perjury. The ANC called on government and Parliament to “act decisively to deal with this irrational and untenable situation”. Cosatu bans President Zuma from speaking at its events following the trade union federation’s central executive committee meeting. General secretary Bheki Ntshalintshali said “the special CEC meeting ultimately resolved that, in respect of the mandate from the workers and in line with the CEC resolution for him to step down, Zuma will no longer be welcome to address Cosatu”.

The timeline we have laid out is growing by the day. President Zuma’s responses – claiming the country is not in crisis – suggest that he is oblivious to his loss of power and influence. They are not a sign of strength but a diagnosis of denialism. They point to a President who, like his colleague across the Limpopo River, is now so punch-drunk that he is unable to recognise the reality of the crisis he has provoked. However, weakened though he and his faction may be, the decisive punch must still be landed.

In this regard the next two months may prove decisive. Whilst the judgment of the Constitutional Court will be hugely important in setting the rules for the vote of no confidence its outcome will be a gauge of the commitment of the ANC to the Constitution versus its commitment to itself. It will be a test as to whether its current leaders have the moral courage of their forebears. If the ANC wants to avoid the humiliation of its President in Parliament its last and only alternative is to remove him at the ANC NEC meeting on the 26-28 of May.

Our futures depend on it. DM

Photo: South Africa’s President Jacob Zuma reacts during a discussion titled ‘The Future of Africa’s Democracies’ at the World Economic Forum on Africa in Dar es Salaam, Tanzania, 07 May 2010, on the last day of the 3-day meeting. EPA/DAI KUROKAWA