Fikile Mbalula’s vow on reporting rape: ‘No woman will be turned away from a police station’ 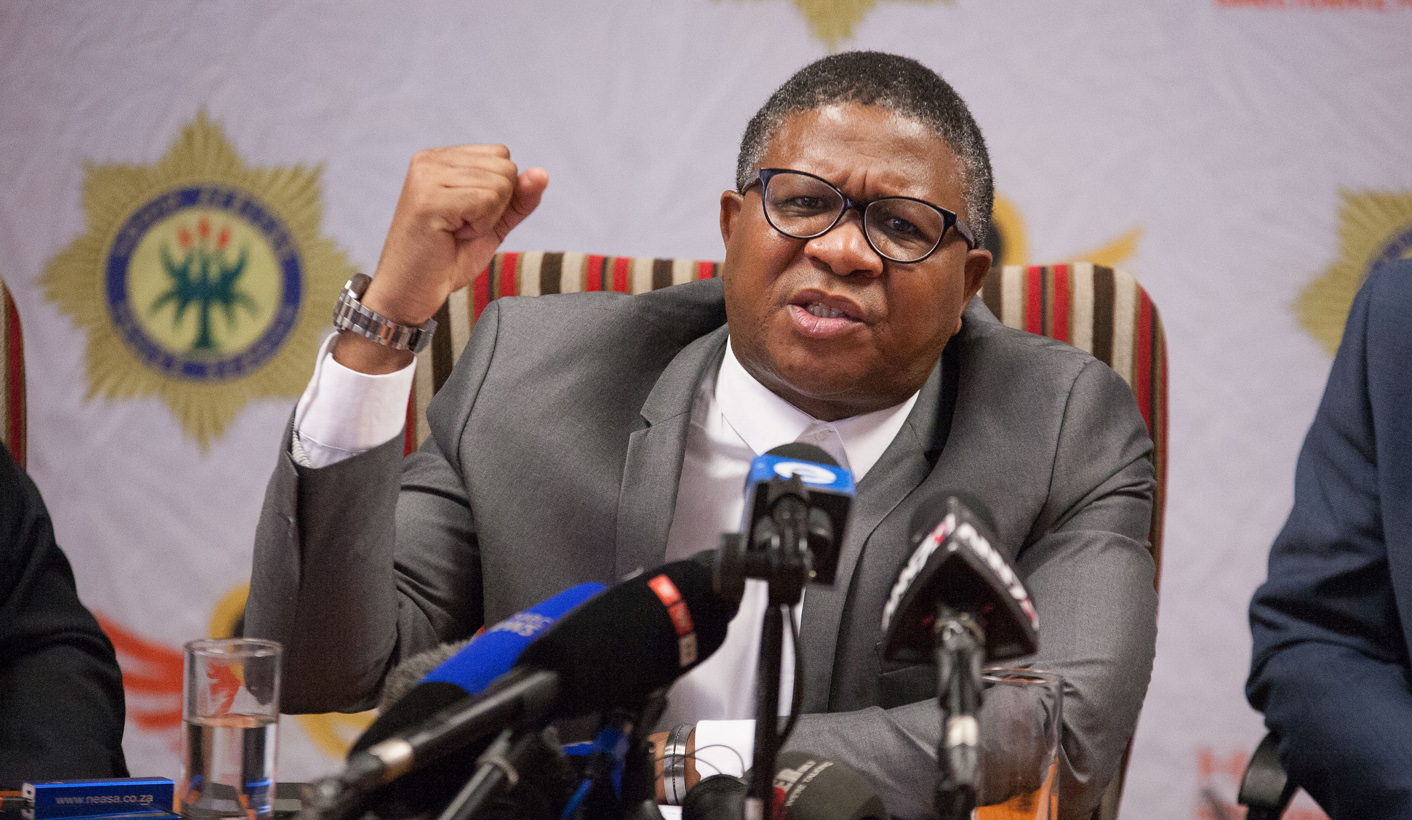 Crime is a national security matter, said Police Minister Fikile Mbalula, but right now the priority is stopping abuse of women. Speaking ahead of this budget vote debate on Tuesday, Mbalula told journalists there would be a national campaign to ensure no woman wanting to report abuse or rape is turned away from a police station. Acting national police commissioner Lieutenant-General Khomotso Phahlane already has his orders to convene a gathering of all cluster commanders and all officers in charge of South Africa’s 1,144 police stations within the next two weeks. By MARIANNE MERTEN.

Police Minister Fikile Mbalula has the gift of the gab, coining phrases like the theme of his budget speech – “Society under siege – mobilising communities into action” – but also the political suss to know how damaging are the reports of women beaten, raped or otherwise abused being ignored, or even denigrated, when seeking help at police stations.

And there have been plenty of such reports, not only in the wake of a series of rapes of women in taxis in Soweto, Johannesburg, earlier this year, but also in the aftermath of the discovery of the body of Karabo Mokoena and the arrest of her boyfriend in connection with her death. The killing of the aspiring young woman, juggling work and studies in Johannesburg, has focused attention on violence against women at a level not seen since the discovery of the body of Anene Booysen, the teenager from Bredasdorp in the Western Cape who was gang-raped and killed in February 2013.

“No woman can be turned away from a police station,” said Mbalula, calling on women to report abuse. “Just like papgeld has become a serious crime, abuse of women must be a serious crime,” he added, in reference to the potential of arrest at a roadblock if there are outstanding child maintenance payments.

A “policy on removing barriers to reporting on sexual offences and domestic violence” has been handed over to the SAPS.

And Mbalula touched on what police have frequently cited as a challenge: women may lay a charge at a police station, but then withdraw it. Of course, civil society organisations and policing and legal experts would tell the police minister that just because a complainant wanted to withdraw a case, the law allowed police to nevertheless continue with investigations and bring a case to the prosecuting services.

Mbalula was adamant that there was no place for an attitude that said if a woman reported rape she “could” be a victim. Often women were dependent on their abusers and in that matrix of power relations, withdrawing a case is one dynamic of such material or other dependence. Just because there were no scratches, he said, didn’t mean abuse did not happen.

As part of the national campaign against abuse of and violence against women, there would be information on what services were available at a police station and awareness of what rights women have. Thanking non-governmental organisations and others for the spotlight on abuse of women, the police minister undertook that the SAPS would co-operate with society. However, he also called on society to take stock of itself with regards to violence against women: “It’s a general problem. It’s psychotic.”

Of course, in Mbalula-speak there was skop, skiet en donner in his budget speech when he told MPs of the war against crime and the “arsenal of police” that would be brought to bear to ensure abuse of women is ended. “We must declare as domestic terrorism.” Against this clashed Mbalula’s statements on the demilitarisation of the police.

During his earlier budget vote briefing the police minister, who regularly posts his anti-crime community meetings on Twitter, maintained that crime was a national security matter. “It threatens national security if our communities are in the pockets of gangsters… It means they can conduct a coup d’etat.”

And so crime intelligence must drive the fight against crime, which must also be “radical”. Earlier this month, the country’s second operation command centre was opened at Blue Downs, following the first such centre in Port Elizabeth.

With crime intelligence thus elevated, and Mbalula’s undertaking that all vacancies would be filled by year’s end, it can be expected that filling the SAPS crime intelligence post is right up at the top of the ministerial agenda. The police crime intelligence post has been filled in an acting capacity for over five years – incumbent Richard Mdluli was suspended, reinstated and again suspended in 2012, pending trial that is set to get under way next month, as Phahlane last year established a counterintelligence division reporting directly to him.

Phahlane will know by December whether he has the top SAPS job permanently or if he’s suspended as the Independent Police Investigative Directorate (Ipid) has called for amid its probe into claims that the acting national police commissioner received kickbacks and was involved in tender irregularities. On Tuesday, all the police minister said about this, and the tensions between Phahlane and Ipid executive director Robert McBride so publicly on display at a recent police parliamentary committee meeting, was that he’s consulting and applying his mind.

But Mbalula’s hands are to be freed next month, as June marks the end of the employment contract of national police commissioner General Riah Phiyega, suspended in the wake of the Marikana commission of inquiry into her fitness for office. Or as Mbalula put it: “By the end of the year you’ll have a new sheriff in town.”

The police minister clearly has his job cut out and needs to be on his guard, particularly as he’s staked much on fighting to end abuse of and violence against women. The SAPS in its 2017/18 annual performance plan set itself a target of detecting just over one in three serious crimes, and 75% of crimes against women, and upped its detection rate for crimes against children by half a percentage point to 70%.

However, the 2015/16 SAPS annual report shows police missed their own target of detecting 75.42% of all crimes against women, from murder, rape and other sexual offences and assault. In that financial year the detection rate stood at 73.54%.

The annual performance plan, tabled as part of Parliament’s budgetary oversight, notes in the 2015/16 Victims of Crime survey that “there are various crimes including sexual offences and assault that are not reported to the SAPS, primarily due to a lack of confidence in the SAPS’s ability to resolve these crimes”. The plan does not talk to how the SAPS would address, and rectify, this.

On Tuesday Mbalula talked tough, but the proof of the pudding lies in what happens next time a woman abused, beaten or raped wants to report this at a police station, be it in a posh city suburb, the shacklands of South Africa or a rural location. DM