Succession Chronicles: Who wants to be the next Gwede? 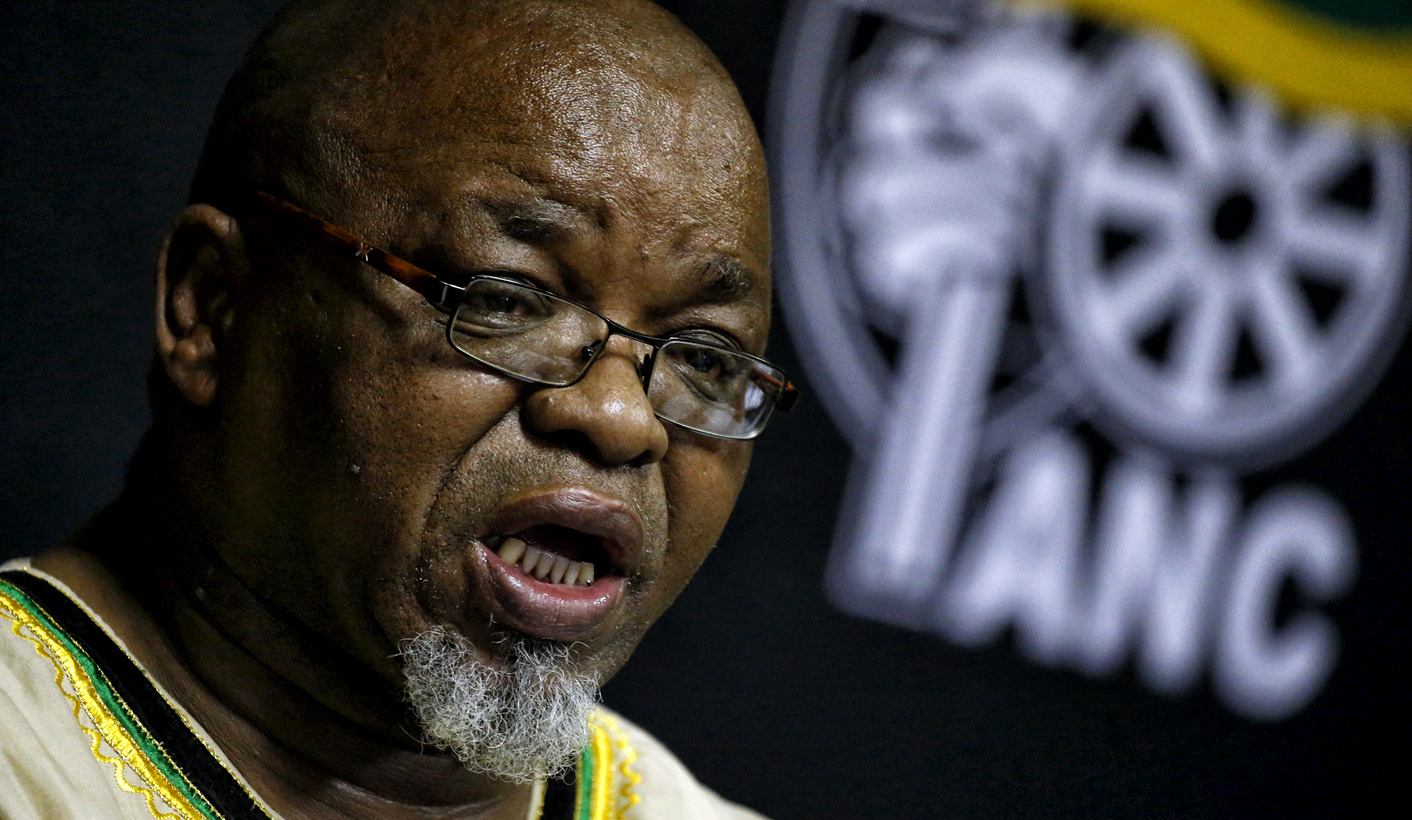 There is now only one thing we know for sure about the ANC’s December elective conference. ANC Secretary-General Gwede Mantashe said on Friday that he would not contest his position again at the 54th national conference. That means that there will definitely be a new secretary-general running the affairs of the ANC. While the focus remains on the top job, the secretary-general position is key to the party’s internal functioning and its main interface with society. Like with the presidency, this is set to be a highly coveted position. By RANJENI MUNUSAMY.

The National Union of Mineworkers (NUM) supplied three of the ANC’s post democracy secretaries-general. Cyril Ramaphosa, Kgalema Motlanthe and Gwede Mantashe all previously served as general secretaries of the NUM before becoming the ANC’s top administrator.

That is unlikely to happen this time around. David Sipunzi was elected as the NUM general secretary in June 2015 and is relatively unknown in ANC structures. Besides, the NUM is no longer the biggest union in Cosatu and does not hold sway politically as it used to.

The net will therefore have to be cast wider to install a new boss at Albert Luthuli House. Apart from torturing journalists at media briefings, the secretary-general deals with the day-to-day functioning of the ANC. He or she keeps minutes of all ANC meetings, including national conferences, national executive committee (NEC) and national working committee (NWC) meetings, and communicates with all party structures. The secretary-general is in charge of preparations for all major events and all departments are accountable to him or her. The ANC’s parliamentary caucus takes direction from the secretary-general and he or she would be the main interface with the alliance partners.

The office of the secretary-general is also where everyone comes knocking in times of trouble or to lay complaints. There has been a steady flow of traffic to Mantashe’s door to report a range of issues including factional battles, service delivery complaints, corruption, state capture and concerns about the conduct of the president.

The deputy secretary-general is meant to assist the secretary-general in their functions. But the relationship between Gwede Mantashe and Jessie Duarte has been explosive rather than co-operative, particularly after they found themselves on opposite sides of the Gupta divide.

Mantashe has now admitted to taking strain. Speaking at a South African Communist Party imbizo in Boksburg on Friday, Mantashe said: “I am sitting in Luthuli House for 10 years… this in my tenth year. I will not be secretary-general in January, okay. I can assure you of that. If I try that luck I [might] as well buy a coffin.”

He also said that stress was a feature of his life due to his job. “I am living stress. You can take it for 10 years but you can’t take it for 15 years.”

So it is safe to assume that someone else will be addressing post NEC press conferences from January. Duarte, mercifully, is not yet being considered by any faction for a promotion.

The name bandied about in relation to the secretary-general position by the faction campaigning for Nkosazana Dlamini-Zuma as president is Free State Premier Ace Magashule. Magashule has been provincial chairperson for as long as the Free State has existed as an ANC structure and is desperate for a national position. It is rumoured, however, that Dlamini-Zuma does not want him on her slate. But based on how factional politics work, the decision might not be up to her but the hidden hand controlling her slate – and the state.

President Jacob Zuma might favour his close ally and new confidante Nathi Mthethwa for the position. Mthethwa is currently one of Zuma’s key defenders in the NEC and NWC, and could secure the backing of the current leadership in KwaZulu-Natal, the province that will have the highest number of voting delegates at the December conference.

Outside the Zuma-Gupta backed slate, there are several candidates being considered for the secretary-general position. Ramaphosa, who will contest the presidency, seems to have warmed up to former KwaZulu-Natal chairperson and Premier Senzo Mchunu, whom has been on the campaign trail with him. Mchunu can deliver the support of a significant portion of the KwaZulu-Natal province to Ramaphosa’s campaign. But this depends on whether ANC members in the province loyal to Mchunu will be allowed to attend the national conference as voting delegates. A lot rides on the outcome of the court application challenging the outcome of the KwaZulu-Natal provincial conference that saw Mchunu’s nemesis Sihle Zikalala elected as chairperson.

Another candidate mentioned as a contender on Ramaphosa’s ticket is Gauteng Premier and ANC deputy chairperson David Makhura. Makhura is one of the ANC’s policy czars and is highly respected across provinces. But his own province wants him to remain at home base as chairperson and for the incumbent, Paul Mashatile, to compete for a top six position.

Mashatile has operated as a backroom dealmaker at previous ANC national conferences – until it all went horribly wrong at Mangaung in 2012. He did not even make it on to the 80-member NEC due to the clean sweep by the faction around Zuma. But Mashatile does attend NEC meetings as an ex officio member by virtue of his position as provincial chairperson.

Zweli Mkhize, the current ANC Treasurer-General, has also been mentioned as a candidate for the post of secretary-general. Mkhize is of course also a dark-horse contender for the position of president and deputy president. But if he goes up against Ramaphosa, this could split the anti-Zuma constituency and work in Dlamini-Zuma’s favour. Mkhize could be a strong number two on Ramaphosa’s ticket, but with Lindiwe Sisulu’s campaign gaining steam, she might be a stronger candidate as deputy president.

Mkhize certainly has the temperament to make a good secretary-general. As a medical doctor, he has a pleasant bedside manner that is the antithesis to Mantashe’s abrasive manner. But what does Mkhize bring to the ticket in terms of the constituency? While he was previously Zuma’s dealmaker and held significant support in KwaZulu-Natal, this has dissipated after he distanced himself from the president. There is now some hostility towards him in the province, as was evident when he was booed at Ahmed Kathrada’s memorial service in Durban in April.

So far no women have been mentioned in connection with the secretary-general position, even though the ANC Women’s League previously said they would want women to contest all the top six posts. Their focus seems to be concentrated on the big prize only.

Police Minister Fikile Mbalula has had his sights set on the secretary-general post from early in Mantashe’s term. When Julius Malema was ANC Youth League president, they campaigned for Mbalula to take over the secretary-general position as they argued that a young leader should be the ANC’s top administrator. Mbalula tried and failed to beat Mantashe in 2012. With ANC secretary-general being a full-time job, Mbalula would have to give up his ministerial post, which he seems to take quite a shine to.

The main task of the ANC secretary-general in the next term will be to heal the factional divides, root out the contamination, corruption and gatekeeping in ANC structures, and restore the integrity of the party. It is a big ask and could be somewhat of a poisoned chalice considering the vested interests in maintaining the status quo.

And if the new ANC secretary-general does not “Mantash” on his or her public statements, that will be an added bonus. DM