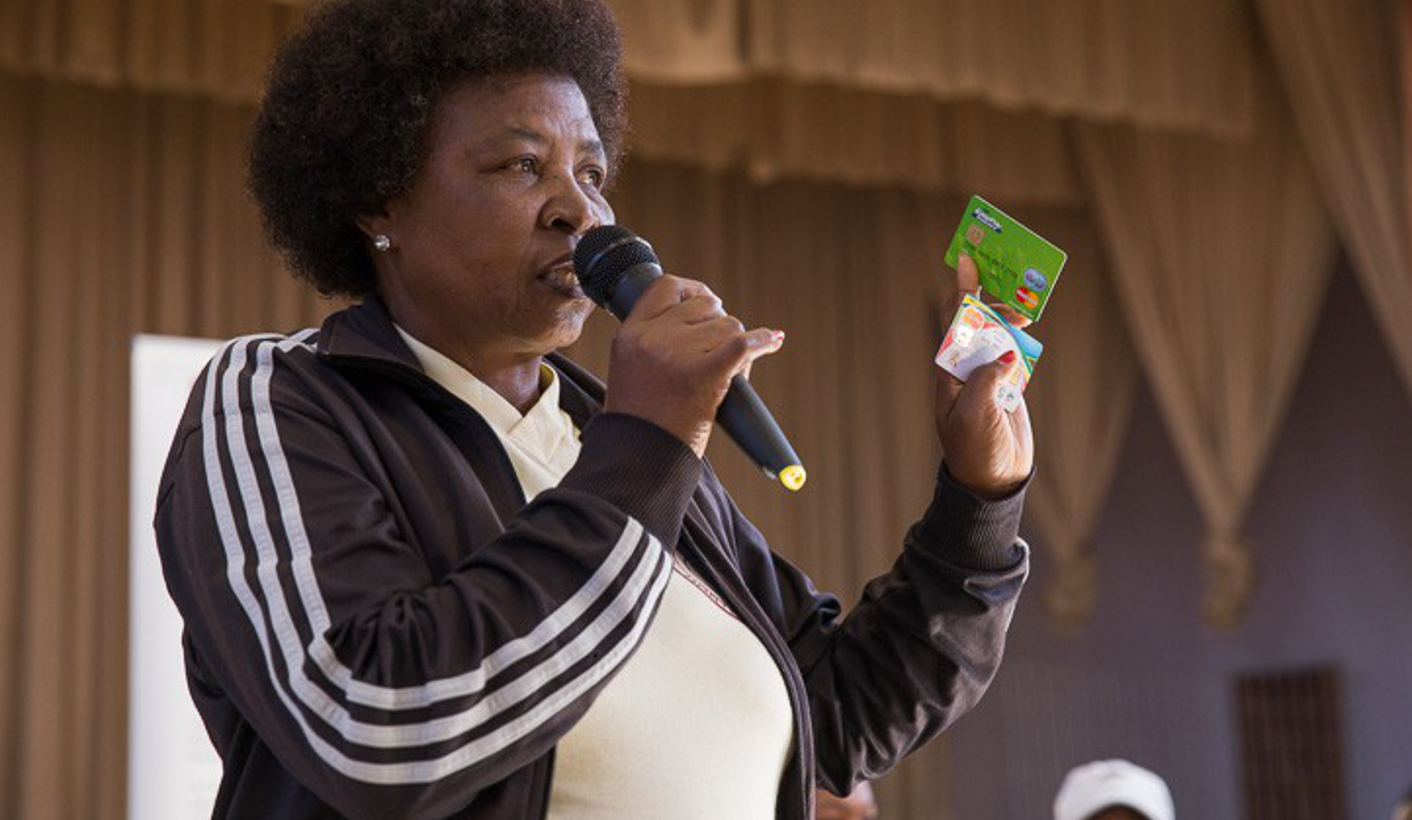 Grant recipients claim deductions being made for policies they’ve no knowledge of. By Barbara Maregele for GROUNDUP.

Nearly 100 South African Social Security Agency (Sassa) beneficiaries from Witzenberg Municipality communities in the Western Cape are calling for an end to the “green cards” and unlawful deductions from their welfare grants.

Green cards are issued by a Net1 company called EasyPay Everywhere to many social grant recipients who apply for loans. It’s used by recipients to transact against their accounts.

“I want to cancel this green card. We don’t want the funeral policies we were forced to take so we could get a loan (at Net1 financial services) and we want it done at no cost,” shouted one of the beneficiaries during a community dialogue at the Bella Vista hall in Ceres on Thursday.

During the event, hosted by the Black Sash and its partners, beneficiaries from Ceres, Tulbagh, Wolseley and surrounding areas were given a platform to voice concerns about their social grants.

For years the Black Sash has been documenting complaints by social grant recipients of unauthorised deductions from their grants, for airtime, electricity, or loans which they did not want. Their “Hands Off our Grants” campaign has also highlighted how difficult it is for victims of these deductions to stop them, in spite of processes put in place by Sassa and CPS.

On Thursday the hall was filled with mostly older women who recounted being coerced into multiple funeral policies in order to get loans. They also complained that in order to query deductions, they either have to get money to call the helpline or travel to the nearest Net1 office in Worcester about 45 kilometres away.

Jacob Fortuin of Op-die-Berg said he took out two loans from Moneyline — the Net1 company responsible for loans — in 2015 and 2016. Fortuin said that the Net 1 representatives arrived at his home in a Sassa branded car.

“They told me I had to get an open EasyPay Everywhere account with a green-coloured card in order get the loan and that I wouldn’t need the white Sassa card any more. I was meant to finish paying off my loans, but when the deductions continued I went to Worcester to have it stopped in February (2017),” he said.

Fortuin said he was shocked when the teller informed him that the deductions was for a 1Life funeral policy, which he had no recollection of getting. He has launched a dispute and is trying to close the policy.

Anna van der Westhuizen, 68, of Ceres said her family was still waiting for Net1’s Smartlife funeral policy to pay out after her husband’s death in October last year. Van der Westhuizen said she was heartbroken when her youngest daughter had to sell her car in order to pay for her father’s funeral.

Victoria Ntangana from Ceres said that she has given up trying to close her EasyPay account. “You wait long on the phone and the airtime runs up. I’m an old woman and I look after the children so I just can’t go to Worcester every time. They must come here,” she said.

Ntangana noted that grant recipients like herself often fell into the cycle of debt by regularly going to moneylenders for loans.

After hearing some of the beneficiaries’ stories, Pieter Koornhof, investment analyst at Allan Gray, said that while the company did not have a majority say in how Net1 ran its business, it was “putting pressure” on them to resolve the issues. “I’m really sorry to hear what happened to you. We are very concerned about this and I can tell you that we are busy doing everything we can to put pressure on Net1 to make things right,” he said.

When asked what exactly the company was doing, Koornhof said it was “too confidential to discuss in public right now.” But the community kept Koornhof and two of his colleagues in the hot seat when they handed over a petition calling for Allan Gray to lobby Net1 on their behalf.

Black Sash director Lynette Maart read out the group’s list of demands. They want: Free monthly statements to make tracking deductions easier; that beneficiaries should not be given an EasyPay Everywhere (EPE) account with SmartLife policies if they don’t qualify for loans; if beneficiaries wish to close their EPE accounts, it should be done within 30 days in the town it was opened; Net1 should stop selling Smartlife policies as a condition to get a loan; and for Allan Gray to ensure that Net1 officials come to Ceres next month to personally assist those who wish to close their accounts.

Maart said that Black Sash would continue to monitor deductions and other complaints raised by grant recipients.

A lawyer GroundUp spoke to at the event said that grant recipients often do not understand the terms and conditions of the loans they take out.

Net1 has consistently denied that its subsidiary companies share social grant recipient information with each other. A report by KPMG commissioned by Net1 found that there was not a 100% correspondence between Moneyline and EasyPay customers, and concluded that the cards are not a requirement for Moneyline loans. (See Has Belamant answered his critics?) DM