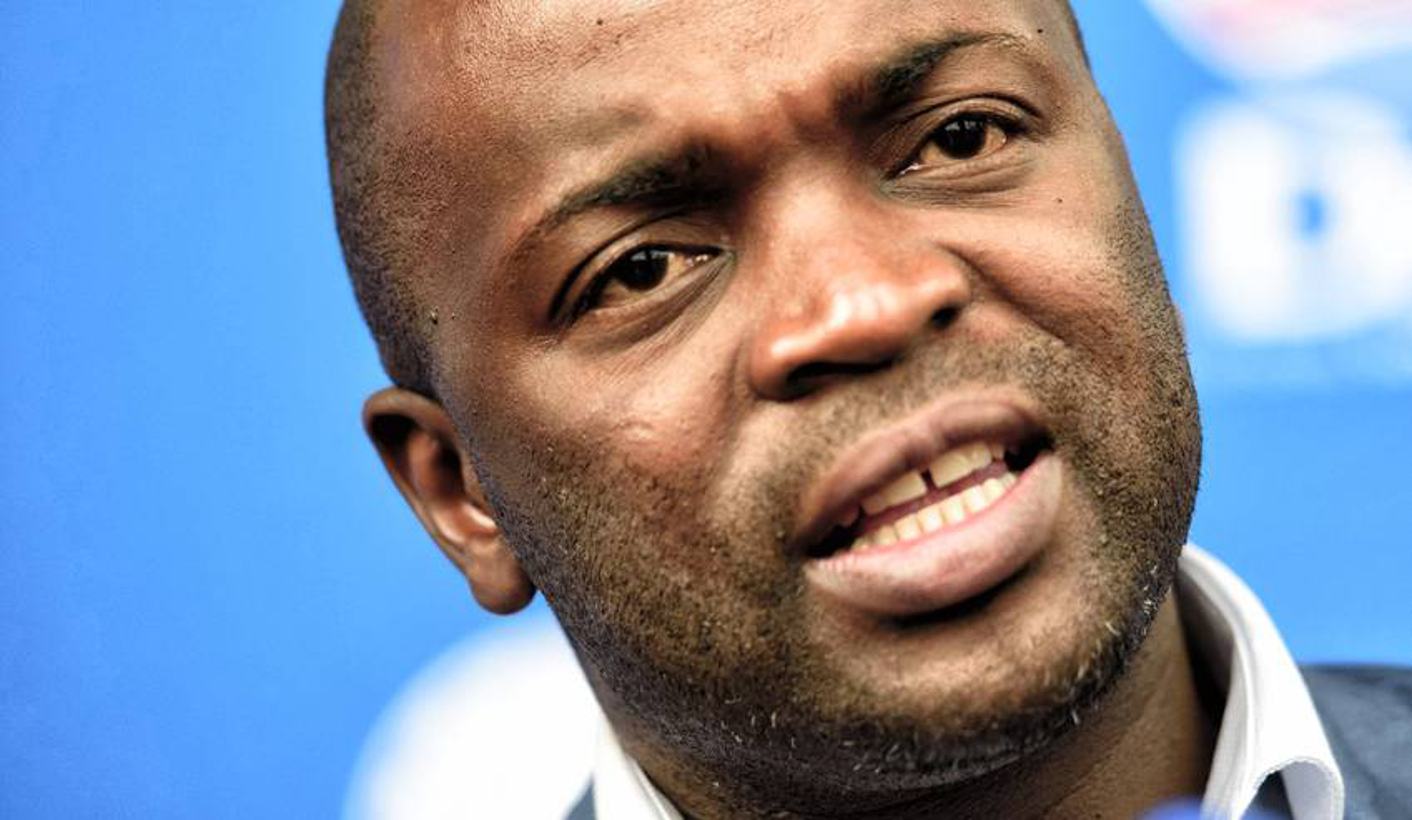 Can German-style social democracy work in South Africa? Tshwane Executive Mayor Solly Msimanga, of the Democratic Alliance, thinks it can. His party has formed a coalition on the council, backed up by the Economic Freedom Fighters. And yet, this unlikely gang will be implementing a straight-up version of the ANC’s National Development Plan. Can “growth” and “job development” happen in Zuma’s downgraded backwater? Msimanga's new city budget, tabled on Thursday, means that we’re about to find out. By RICHARD POPLAK.

The clock had just struck 10:20 when the speaker of the Tshwane city council, R.K. Mathebe, announced that there was a quorum in the house. City Hall, located in Sammy Marks Square, has not been treated kindly by successive ANC administrations. It bears a shabby, West Africa-during-a-civil-war vibe – the walls in the public gallery are scuffed, while the ceiling tiles vomit chunks of carcinogenic fluff onto guests eating sad, wilted cocktail sandwiches.

Come to think of it, this pretty much sums up Tshwane. The city appears grim, forgotten. Madiba Street, one of the CBD’s main drags, is marked by mounds of reeking garbage; the townships are even worse. The Democratic Alliance, who took over the Executive Mayoralship after the spectacularly useless Kgosientso “Sputla” Ramokgopa face-planted into ignominy following the 2016 municipal elections, were incredibly naïve regarding the challenges inherent in fixing the city. Five people died in violence that led up to the elections, a hint of what was to come: municipalities are the level of governance that most impact the lives of average South Africans; they also serve as the tendons that knit together the musculature of the patronage system.

The process of taming Tshwane, if you speak with anyone familiar with the city and its new administration, has been far from pleasant. Nonetheless, on budget day, Msimanga arrived in the council chambers wearing a cream suit that looked suspiciously Gigaba-ish; with his burly, rugby player’s shoulders he could have played a mayor in an HBO show set in the ‘70s. He began reading fast, and then faster. He even took slugs from his water bottle at a significantly athletic pace.

“The truth is that I can announce big projects, or I can be honest,” began the mayor. “I will go straight to the point, and say what the city is all about. Madame speaker, the truth is that service delivery has been ignored in this city for some time.”

“The fact is, the City closed the last financial year with a deficit in excess of R2-billion,” he continued. “The fact is, revenue collection was not a priority for the previous administration. The fact is that we have PEU smart meter and broadband contracts that jointly cost the City in excess of R1-billion a year and this threatens to bankrupt the city. The PEU smart meter commission alone costs the city more than R630-million annually.”

And Sputla was one of the good ones. Still, Tshwane’s dysfunction has become legendary, even in a country inured to political dysfunction. But the ANC council members don’t much like being reminded of this stuff. And so, the council chambers have been marked by violence and piggishness from ANC members, who began yelling and pointing stubby fingers at Msimanga, who in response slugged water, and kept reading.

“It is up to us to free this city from the evils of apartheid, and the maladministration of the previous government,” said Msimanga. “Failure, Madame Speaker, is not an option.”

What Msimanga didn’t say, but was perhaps implying, is that Tshwane is run by the purest Mafia-style syndicate of any metro in South Africa – a Chicago-in-the-1930s Gangsta’s Paradise that funnelled billions into the pockets of Adidas tracksuits, and into the cubbyholes of luxury sedans. Much of the new administration’s work is concentrated on breaking the hold of these syndicates, especially as it pertains to rubbish disposal in Mamelodi, Atteridgeville, Hammanskraal and Soshanguve.

Budgets are one thing; dealing with a hundred Al Capones is another. But there is a flipside to this story. As an ANC cadre named William Malenga told me, “We have no problem with Solly. It’s the people who deploy him who are the problem. You cannot fight with people on the ground when you are doing service delivery. They are not all ANC.” The issue, of course, is that for decades the delivery of services has been a rough, cruel and brutal empowerment programme, and those who have survived are not impressed with the changeover. Regardless, disassembling these ancient patronage networks is basically a canary down the mine for the rest of the country as we move into the age of coalition governance.

In any event, the ANC and their friends will not be cheered when they read over Msimanga’s austerity budget. It is a nasty document if you happen to be an ex-beneficiary. Expenditure is tabled at R30-billion, against a total expected revenue of R30.3-billion (a further R2.5-billion or so from various government grants will also come in at some point). DA-like, there’ll be a $2.7-billion surplus at the end of the next fiscal year. Which is all fine and well, but it certainly doesn’t help that Jacob Zuma has gone and tanked any chance of favourable borrowing rates, thanks to his recent caprice regarding the National Treasury. So consider the revenue as speculative until the last penny comes in.

And even if he had all the cash in the world, Msimanga is one of those DA folk who bears a stolidly social democratic outlook — a belief that growth is salvation, that upliftment is possible, and jobs are the natural result of good, clean governance. (Tell that to the robots who are about to take over the manufacturing sector, but anyway.) The budget he was putting before council, said Msimanga, was fully funded, and properly drafted. “Each and every promise that we made will be realised.”

Tshwane is the most expensive municipality in the country for residents to live in, he said. “We will make sure for the first time, we will not raise rates for residents wanting to build a car wash in Mamelodi.” The huge issue, of course, is rate payments — the absurd set of clawbacks that force South Africans on social security into double penury. “Electricity will increase by 1.8%, water by 10.2% and refuse removal by 7.5%,” said Msimanga, blaming the utility companies for the rate increases. “Property rates tariff will be based on the new valuation roll. The total account is expected to increase by around 2% on average.”

Which is not insignificant, but the burden appears to be landing squarely in the wallets of what remains of the middle class. For one thing, the budget stipulated that all homes valued at less than R120,000 would not be levied any property rates. For another, “There were rumours that this would be a DA budget that focused on the suburbs,” said Msimanga. “In fact, more than 60% of our budget is going to areas that have never had service before.”

For Msimanga, much like his counterpart in Johannesburg, Herman Mashaba, inner-city rejuvenation is an administrative focus, and essential to turning around the economic prospects of the entire urban environment. A further R1.3-billion had been set aside to repair and maintain existing infrastructure, a measure necessary to prevent the city from turning into Gomorrah without decent plumbing.

Another pet project of Msimanga’s is the so-called “industrial nodes”, which will be spit-shined by the city, and his budget would pour R660-million into Rosslyn, Ekangala and Waltloo, in order to keep and draw car manufacturers into the region. (Keep in mind that the government already heavily subsidises carmakers — and as a reward for their generosity, GM has just decided to pull out of the country, taking thousands of jobs with them.) Perhaps a smarter play is the R84-million the mayor has earmarked for the Wonderboom airport, an underused facility the city hopes can be transformed into a freight and logistics hub.

Msimanga and his party did not win an outright majority of the council, of course, and so they do not govern alone — they must appease the EFF members that are not part of the DA coalition, but vote with them on a case-by-case basis. This is a budget that the opposition will probably back.

Nonetheless, as Msimanga was reading, it struck me that this was perhaps the most perfect articulation of policies dear to the DA, even though the Gauteng cabal has very little association with, and even less time for, the high-end whities in the Western Cape. It was rigorously commonsensical, with a stolidly protestant aversion to debt, and a belief in the heavenly union between public and private sectors (with the public sector gently and respectfully leading the way). Attract investment, grow the economy, end poverty. Oh, and don’t forget a serious animadversion to crime in general, and drug abuse in particular.

Nancy Reagan-meets-Angela Merkel, with a significant dose of Thabo Mbeki.

By this time, things were getting a little heavy in the cheap seats. About five large ANC bruisers walked in halfway through the speech, and one, who wore an ANC flag as a cape (Super Thief?), sat next to a small EFF delegation, who didn’t look impressed. Naturally, there were no obvious DA supporters in the gallery – they tend to avoid this kind of thing. But the relentless professionalism of the budget – its sheer technocratic somnambulance – threatened to shut down any potential conflict.

The morning passed without a scrap worth noting.

And so, we arrive at something of an experiment – the actual implementation, at least on a municipal level, of the social democratic (some might say neoliberal) policies promulgated by the ANC, and backed enthusiastically by the DA. The DA and the ANC have always been interchangeable policy-wise, the former being enthusiastic backers of Mbeki’s GEAR, and its successor, Trevor Manuel’s National Development Plan. This, then, is their hopes and dreams in action. We’ll get to see if it works in microcosm, and then we’ll either lament that it was never “actioned” as national policy, or thank Sweet Baby Jesus that the ANC was too incompetent to do so. And through it all, Solly Msimanga has to kick a whole bunch of Mafia ass into submission. DM

Public schools are under siege: It’s time to drastically revise their funding model

Being young and living with HIV during Covid-19

Nomfundo Xolo for Spotlight • 1 min ago