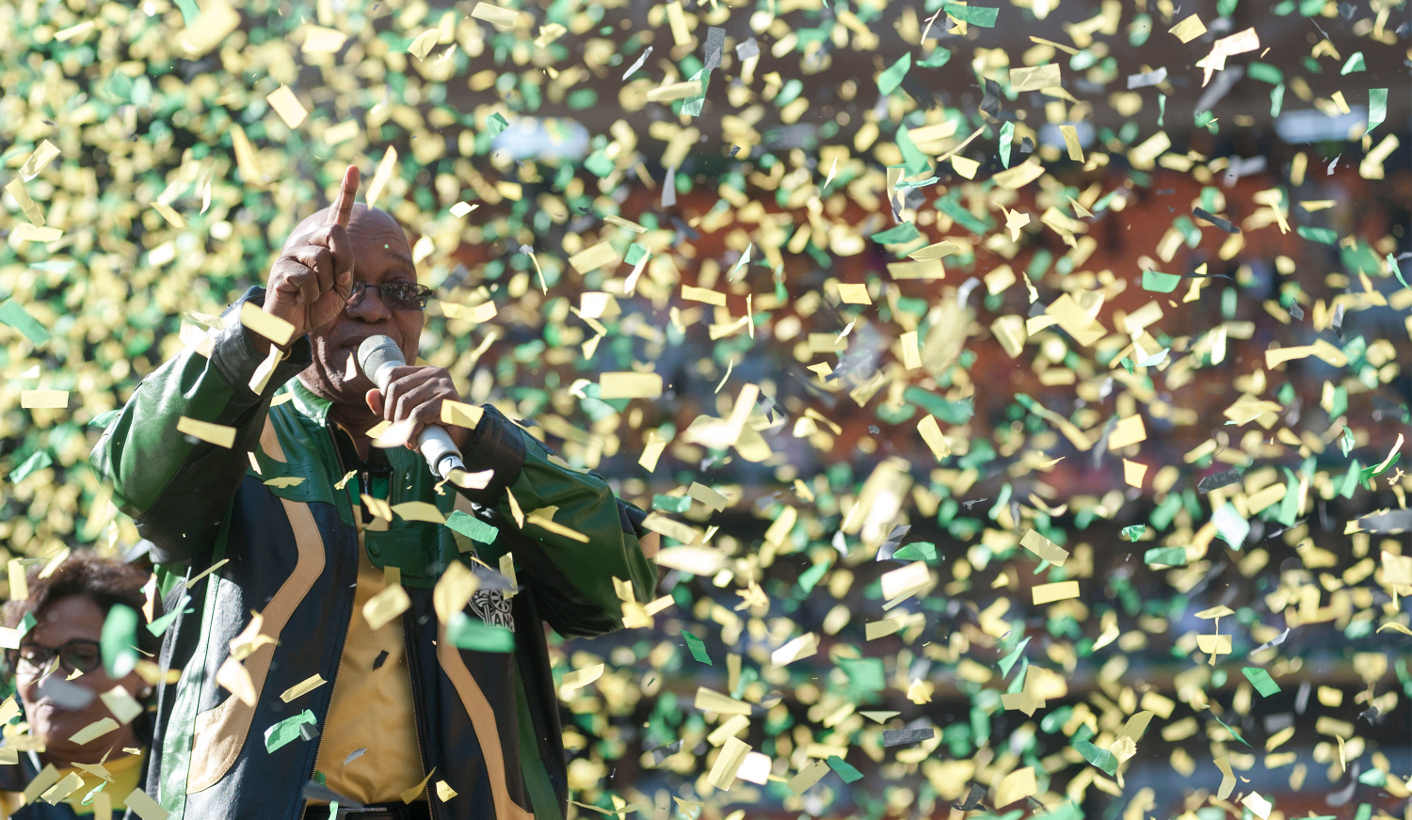 Money and politics is a potentially toxic mix, but for 13 years it has brought together political parties of all persuasions in their refusal to open their books. It’s always been a case of “I’ll show you mine if you show me yours”. Civil society court challenges for disclosure in 2004 and 2015 proved unsuccessful. But this may change. The ANC in Parliament on Thursday said it is looking to legislation to boost political parties’ state funding and to regulate private political donations. The Freedom Front Plus said it’s heading to court for an improved formula for funding of smaller parties from the public purse. By MARIANNE MERTEN.

It’s not often that political parties as ideologically divergent as the ANC and Freedom Front Plus agree on anything. But on Thursday they were in agreement in their complaint that there was simply not enough financial support for them. After all, democracy is expensive and so is fighting elections.

Political parties are supported by the state through the Representative Political Parties Fund, administered by the Electoral Commission of South Africa (IEC), on the basis of the numbers of their MPs and representatives in provincial legislatures. The statutory fund was established in 1997 in line with Section 236 of the Constitution: “To enhance multiparty democracy, national legislation must provide for the funding of political parties participating in national and provincial legislatures on an equitable and proportional basis.”

In return for allocations from this fund, political parties provide financial statements published in the fund’s annual report, in a rare insight into party-political funding. Over the years these annual reports show that, broadly speaking, these monies are spent on buildings, staff and their pensions, travel, meetings and rallies.

In the current financial year, the fund makes available a bit less than R150-million, divvied up among the 13 political parties in Parliament according to a complicated formula largely based on numbers, also in provinces.

The ANC, as the largest political party, gets the biggest slice of the pie, although somewhat smaller as it shed a few MPs in the 2014 poll amid declining election fortunes. But with 62% electoral support – 249 MPs and 279 MPLs – the ANC got R75.6-million in the 2016 financial year, according to the fund’s annual report.

The FF+ with its four MPs and three MPLs, meanwhile, got R1.8-million. Or as party leader Pieter Groenewald put it: Of the R604.5-million paid out from the fund, his party got R5.5-million, the ANC R324-million and the DA R89-million.

And so, having obtained a legal opinion, the party is headed to court within the next three months in an effort to obtain a more equitable funding formula that did not disadvantage smaller political parties. It cost R30 for each election poster – the party spent R9-million alone for 2014 election posters – between R7,000 to R12,000 for a 30-second advert and between R53,000 and R58,000 for a 20 x 10cm Afrikaans daily newspaper advert.

“We decided we have endured enough,” said Groenewald, adding that his FF+ had extended its “hand of friendship” to other political parties to join it. The United Democratic Movement (UDM) may just consider doing so: its leader Bantu Holomisa has for years raised this bugbear.

The ANC on Thursday did not object to the funding formula, but argued the overall amount available through the statutory fund was simply inadequate for political parties to play their fundamental role in South Africa’s constitutional democracy.

“Even R150-million going to one political party is absolutely nothing,” said ANC Chief Whip Jackson Mthembu, adding it was difficult to say how much public funding was enough: “Democracy is quite an expensive project.” While only the party’s treasurer knew the party finances, as head of the ANC National Executive Committee (NEC) communications sub-committee Mthembu knew “there was a communications line item in the elections budget of more than R200-million”.

Now the ANC is proposing a parliamentary motion to establish an ad hoc committee to draft amendments to the 1997 Public Funding of Represented Political Parties Act – not only to increase public funding, but in return for this to introduce a disclosure regimen for private party political funding.

“The issue is not only increasing public funding. The issue is also transparency on where we get additional private funding form,” explained Mthembu.

“The limited nature of public funding for core party activities leads to extensive reliance on private donations… The reliance on private funding fuels the perception that anonymous donations from business interests are a means to subvert democratic processes by influencing the awarding of contracts or framing of policy in a manner which advantages private interest, dilutes the voice of citizens and undermines the Constitution.”

Why now? And that’s where it became politically tricky. The ANC has faced increasing criticism over patronage networks and money being paid for tenders, and several incidents where its public representatives sent out party funding requests on government letterheads. During finance committee public hearings earlier this year Progressive Professional Forum (PPF) president Mzwanele Manyi explained opposition to the Financial Intelligence Centre Amendment Bill becoming law (it since has) because “the essence of this thing is to deal with 2019 [elections]. When we get to 2019, the ANC is broke as hell”.

The governing party repeatedly has dismissed such claims, and on Thursday Mthembu invoked the party’s national conference resolutions of Polokwane in 2007 and Mangaung in 2012 as reasons for this move on party-political funding from both public and private sources. It was a case of better late than never.

This resolution came just over two years after the Western Cape High Court, approached by Idasa after its requests for funding disclosure to the largest five political parties were rejected, ruled that political parties could not be forced to disclose as they were private entities, but that there should be legislation in the interest of accountability.

By 2012 nothing had happened, but the party-political funding resolution of the ANC’s Mangaung national conference was strengthened. “Such funding will be accompanied by full financial accountability and transparency by political parties, including regulation of private financing… Foreign funding should be permitted but must be regulated to avoid abuse and manipulation by external forces in the political affairs of our country.”

Nothing happened. In late 2015 My Vote Counts, a campaign for election transparency, approached the Constitutional Court for a ruling to regulate party-political funding. But National Assembly Speaker Baleka Mbete, who is also ANC national chairperson, successfully argued that Parliament had done what it was required to do: the Promotion of Access to Information Act (Paia) was the tool available for disclosure. As directed by the court, My Vote Counts last year sent Paia requests to all 13 political parties represented in Parliament. On Thursday Janine Ogle from My Vote Counts confirmed it had received four replies, all declining to respond. The DA and IFP sent lawyers’ letters, the FF+ and African Independent Congress (AIC) politely declined. My Vote Counts is back in court in Cape Town in mid-August.

If the ANC parliamentary caucus has its way, the ad hoc committee will be in full swing by then, with a view to complete the legislative amendments before Parliament rises in December, the month the ANC holds its next national conference.

At Parliament the moves to establish an ad hoc committee on public and private party-political funding are under way with the ANC set to make a detailed presentation next week. DA Chief Whip John Steenhuisen on Thursday welcomed this: “The DA believes in transparency and fairness, provided it applies to all political parties, without exception.”

Mthembu said the ad hoc committee process would address concerns raised by civil society that the current party-political funding regimen lacked transparency. Issues to be considered would include defining “appropriate political activities” funded from the public purse and limiting the use of public funding for these. It could also include a requirement to disclose not only foreign funding, but also to detail how money from such particular sources was spent.

Is the proposed regulation of disclosure and transparency of private party-political funding a precursor to legislated mandatory disclosure of funding for civil society organisations? In this day of regime-change talk, finger-pointing to Western vested interests and the like, watch this space. DM