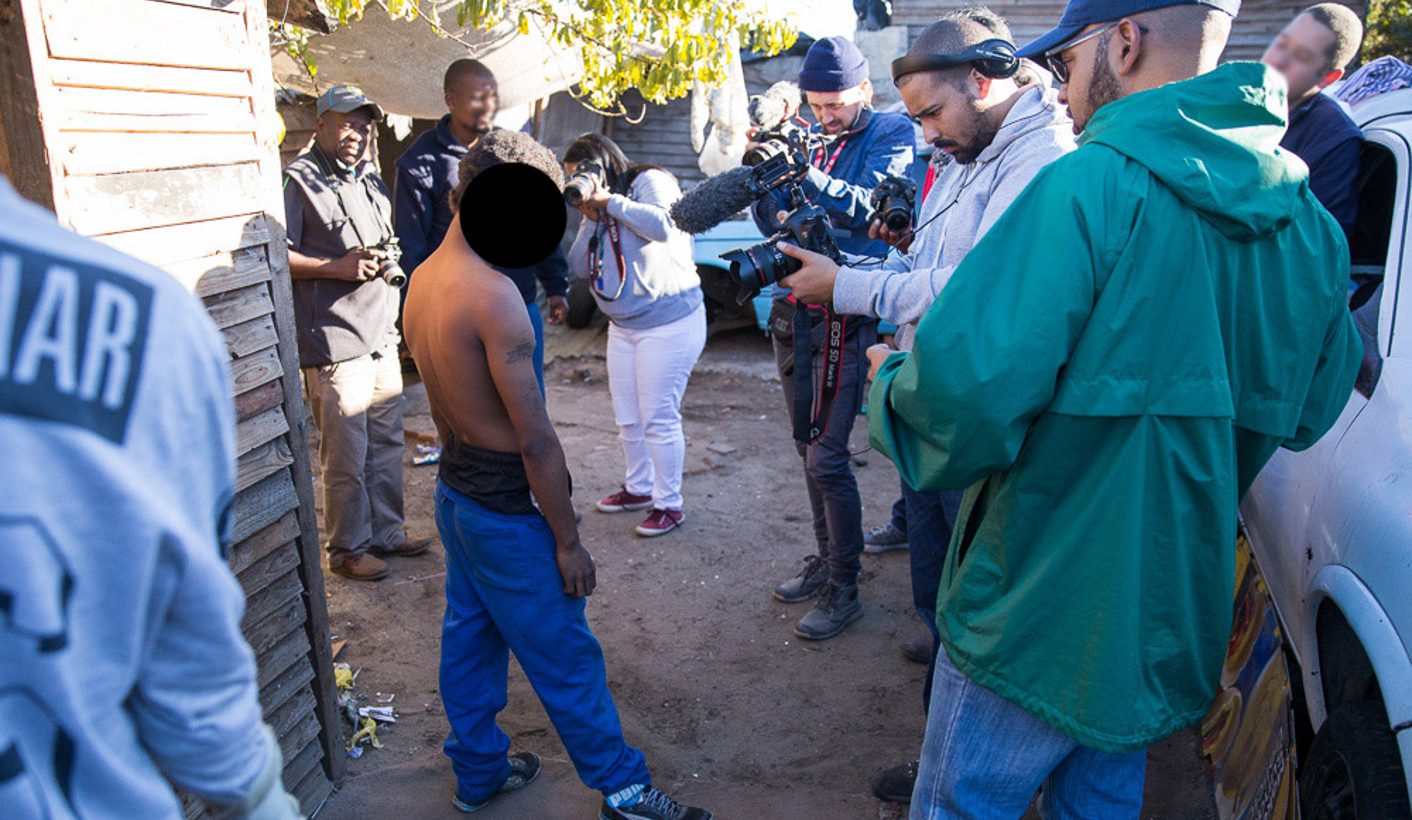 I was excited to go on a police ride-along but by the end of it I wondered if I’d compromised my ethics. By Ashraf Hendricks for GROUNDUP.

On Monday, journalists were invited to ride-along on a crime operation with the Cape Town Metro Police Department and the Gang and Drug Task Team.

In my ignorance, I believed that there are certain things one needs to experience to be a great photojournalist. Being relatively young in the industry, I want to be part of the pack. I’ve already been shot with rubber bullets, tear-gassed and threatened with arrest. Witnessing a dangerous drug raid would be one more decoration and another step to Twitter fame.

We met in Parow, where we signed our indemnity forms and were briefed by Metro Police Chief Wayne le Roux. He gave us a basic overview of the operation and told us to avoid showing the faces of police officers as some of them live and work in the areas where the operation was taking place.

We were taken in a police van on a five-minute drive to Leonsdale, Elsies River. Arriving in a police vehicle unsettled me. Previously, during protest action, I was threatened and accused of working for the police, which is not true, but what if someone saw me now?

It was just after 7am and the sun was rising. We reached our first house and police went about knocking loudly on doors. They did, however, ask for permission to enter – with a swarm of press behind them. Narcotic sniffer dogs followed. Couches and cupboards were searched.

A woman in the first house we entered carried on dressing her child for school, as if nothing was happening. I felt awkward ignoring her privacy. The house was neat and tidy and there was nothing of interest to us media. Two houses later, still nothing.

Police tell us most raids are based on tip-offs from the public.

We then head to Ravensmead to a sort of junkyard with a horse in a stable and free ranging chickens. It is just after 8am and the winter light is beautiful. A few people are searched and we all snap away at these citizens who are now suddenly construed as “suspects”.

A ‘suspect’ is searched by Metro Police in Ravensmead. The issue here is that a picture of a person being searched by police automatically makes them look like a criminal by association, even if we use words such as ‘suspect’ or ‘alleged’. Photo: Ashraf Hendricks

I notice one journalist speaking to people living on the property. They are chatting in Afrikaans and I wish I could do the same, but my Afrikaans isn’t up to it. I see another journalist laughing, playing with a puppy. Then, police find a sandwich bag with a bit of low grade weed in it and half a mandrax tablet. No arrests are made and there’s not much to show to the press. Most of us got up at 5am for this; we were expecting to find hard drugs and see people arrested.

We head to Wendy Park in Ravensmead. Residents smile and greet, happy to see the police in their area. I can smell dagga in the air. Police call us to a tiny house. Inside is a man who has been smoking dope and possibly mandrax through the neck of a broken bottle. He’s young. He is afraid and confused. Three officers are searching his small room and several journalists (myself included) are inside, blocking the doorway, snapping pictures and shooting videos.

At this point, I realise there is no story here.

A few metres away, police have pulled two young men out of a house. A tik pipe is shown to me. The men are searched and about seven of us gather around to photograph them. Police make them kneel and put their hands on their heads. The light is good and I know that the pictures will be beautiful. A police officer slides back the sleeve of the one man in order to show off his tattooed arm. We inch in closer to get a better look at these “gang” tattoos.

Two men kneel after being searched by police. A tik pipe was found in the house. Photo: Ashraf Hendricks

Noticing our interest, the police officer asks the second man to take off his top. The officer helps him reluctantly remove his tracksuit. The number 2 is tattooed on one shoulder, an 8 on the other. The officer points out two stars tattooed on each shoulder.

Swaying and drowsy, the first young man appears to still be drugged up and disorientated. The police officer tells him to turn and face us so that we can photograph his topless body, too.

“Bad Boy” is tattooed on his front. His head drops to his chest. Police parade him around for the media. A journalist taps him on the chest and tells him to face away. Reporters start questioning him. We find out that he is 18 years old. He has been in a gang for a year.

It occurs to me that we are surrounding a drugged-up 18-year-old, who probably doesn’t fully understand what is going on. Is this all okay, because he is suspected of belonging to a gang?

A reporter asks the boy to turn his way. He looks down, but the police tell him to look up. He does – straight into my viewfinder. I put my camera down. I make eye contact with the boy, for a few seconds, with no camera. It is too much for me; I’m done.

I take two steps back in order to take a photograph of the scene in its context.

“I really don’t feel comfortable with any of this,” I say to another journalist. “Is this what happens normally on these drive-alongs?” DM

Views expressed are not necessarily those of other GroundUp staff