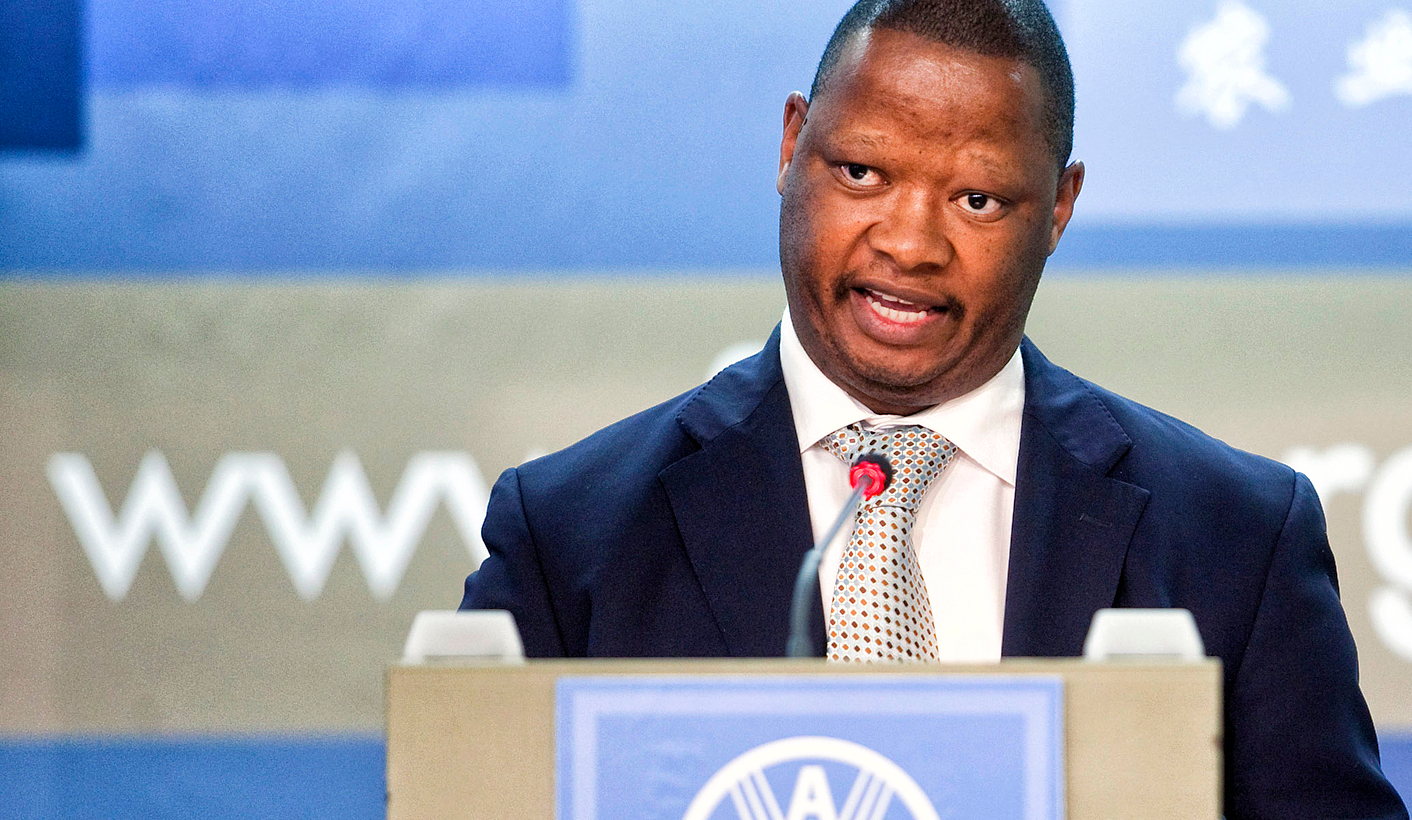 When Secretary to Parliament Gengezi Mgidlana appeared before the Standing Committee on the Financial Management of Parliament on Thursday evening, he declined to answer questions about how he was awarded a bursary of just over R30,000. The national legislature’s top administrator and accounting officer also defended his appointment to the special tender bid adjudication committee which the opposition DA and the National Education, Health and Allied Workers Union (Nehawu) in a written submission said flouted regulations on procurement processes. But Mgidlana’s responses may just have underwhelmed MPs. By MARIANNE MERTEN.

There was a moment in the Standing Committee on the Financial Management of Parliament when ANC MP Connie September asked Secretary to Parliament Gengezi Mgidlana to confirm or deny the danger payment to the so-called “bouncers”, or the white shirts Parliament hired in 2015 to be at the forefront of evicting unruly MPs.

She could not ask her main question, September said, unless it was officially confirmed to the committee this danger pay was truth rather than media speculation. Mgidlana prevaricated, and remained silent. Committee co-chairperson Vincent Smith intervened, saying it was a simple yes or no answer. Eventually the Secretary to Parliament replied: “Yes, indeed it is being finalised and implemented since February.”

The question that followed was innocuous: On what basis was this danger pay (City Press reported it was R400 a month when Parliament is in session) instituted – the Basic Conditions of Employment Act, health and safety regulations or the bargaining chamber agreement?

Mgidlana’s response didn’t quite explain that. “We benchmarked the danger pay with what the public service also puts forward,” he told MPs. “It was approved and authorised by the executive authority (the presiding officers), based on our motivation, as something that we need for the institution going forward.”

Two of the “bouncers”, officially known as chamber support staff in Parliament’s organogram, sat in the committee meeting. Mgidlana’s bodyguard was outside the V454 committee room, rushing to hold open the lift doors for him when the meeting finally finished after 9pm.

This exchange over the danger pay is representative of the over three-and-a-half hour exchange between Mgidlana, who was accompanied by his management team, and MPs, and the committee. At one stage Smith described proceedings as “a management meeting where we are told what is being done” and asked Mgidlana to wrap up to take MPs questions as part of the committee’s oversight responsibilities.

While DA Chief Whip John Steenhuisen hauled out chapter and verse on special adjudication committee procurement regulations, saying the Secretary to Parliament was acting as both player and referee, Mgidlana simply replied that a legal opinion was obtained and all was above board.

“We looked at the regulations and studied them very carefully … We have complied … The Secretary to Parliament serves in committee as last instance,” he said, adding if there was a dispute, it could be taken to the auditor-general or outside expertise.

It is understood that no such recourse exists in law, or regulation. A memorandum, dated November 2016, by Parliament’s supply chain management secretariat which ultimately reports to Mgidlana shows that he signed off on the secretariat recommendation as the chair of the special bid adjudication committee.

The Secretary to Parliament’s answer didn’t quite wash with Steenhuisen. The committee also found unsatisfactory how it appeared that Parliament was moving on condoning irregular, fruitless and wasteful expenditure – a tiny amount in its around R2-billion budget and insufficient to detract from the institution’s unqualified audit in 2015.

The process of condonation requires signing off by the presiding officers, National Assembly Speaker Baleka Mbete, also ANC national chairperson, and National Council of Provinces (NCOP) Chairperson Thandi Modise, with  the tabling of reasons for this condonation to the committee. While not all the irregular, fruitless and wasteful expenditure has been condoned, some of it has, but the documentation on this has not reached the committee.

While Mgidlana asked for the process to be allowed to unfold, Smith raised concerns.  “Your document (to the committee) says you have already condoned, but we have not seen anything. You can’t on the one hand be asking us to be patient, but go and finalise. These gaps, we will raise.”

And gaps on policy would also be raised as part of the oversight process. The policy on bursaries, or learning and development, clearly draws a distinction between parliamentary employees entitled to this, and the Secretary to Parliament. When Mgidlana was asked to answer how he was awarded his bursary, he declined, saying he was before the committee to talk for Parliament overall.

Mgidlana told MPs much work was being done in the labour relations environment, but there were some imprecisions. Seven further cases of suspensions emerged in addition to the one initially mentioned in the briefing but only after IFP Chief Whip Narend Singh’s question on others among committee staff.

Without revealing any names, he said: “Employees are suspended for a variety of reasons. For Parliament, we only have one employee that is suspended and that case has been a matter that has always been handled by the legal representatives of that employee and legal representatives of Parliament,” Mgidlana said. “At this stage there is no resolution. It is still a pending matter.” Mgidlana’s initial account referred to Zelda Holtzman, the former head of the Parliamentary Protection Service was suspended in 2015 alongside her deputy, according to City Press, amid controversies over Mgidlana’s use of blue lights and the recruitment of the bouncers.

In response to Singh’s question it emerged there were seven other cases where disciplinary proceedings had not been finalised, but the rands and cents involved as Singh has asked, was undisclosed.

Mgidlana undertook to provide all policies to the committee, as well as the written memorandum dating back to previous accounting officers with regards to the supply chain management, or procurement, process.

The Standing Committee on the Financial Management of Parliament is a recently established committee and is still testing the waters in its quarterly meetings with the Secretary to Parliament.

But there already has been an impact. After it emerged in March that Mgidlana had not signed his statutorily-required performance agreement with the presiding officers 46 weeks into the 2016/17 financial year, the situation was quickly corrected.  The test will be in how the committee’s oversight unfolds. DM