Op-Ed: South Africa needs a Marshall Plan or we will soon have Martial Law 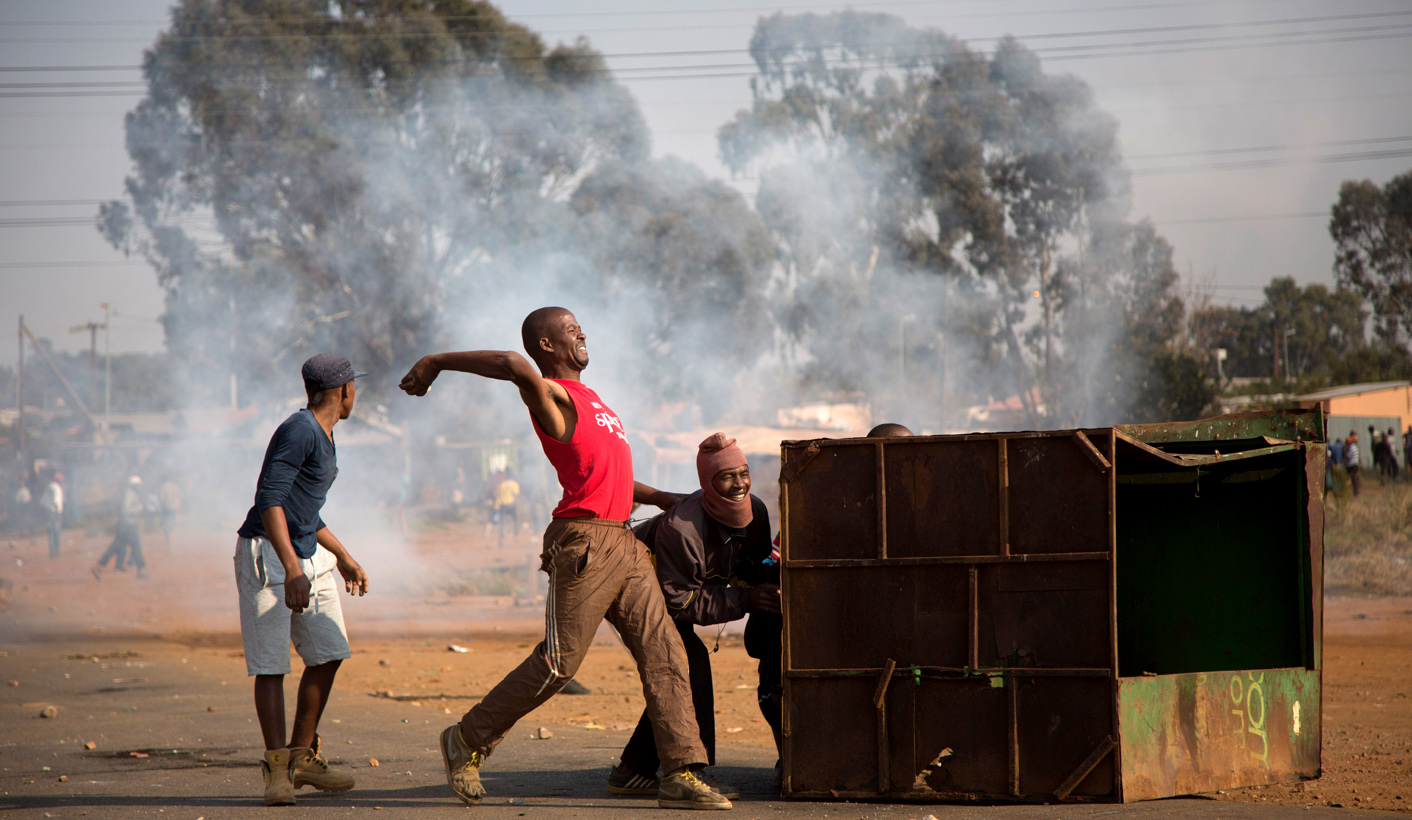 After the devastation of the World War ll, Western Europe was largely in ruins. Through an economic support package of $13-billion the US helped European nations rebuild their economies. This intervention, the so-called European Recovery Programme, became known as the Marshall Plan, named after the US Secretary of State, George C Mahshall who was appointed by President Harry Truman to preside over the post-war recovery effort, a man who the president called, “the greatest man of World War ll”.

South Africa is now poised to choose between a future marked by co-ordinated efforts to rebuild, or unco-ordinated efforts to destroy vestiges of affluence amassed during apartheid. Many of our post-apartheid communities are comparable to a post-war Europe. The recent developments in Coligny, Ennerdale, Vuwani etc come on the back of a rising swell of civil unrest rooted in socio-economic degradation. While the tyres burn in these forgotten ghettos, the cranes keep raising temples of capitalism in Sandton, Menlyn and Cape Town’s outer rim. The disparities are simply not sustainable. They will force upon us three choices that will dramatically shape South Africa’s next 50 years.

South Africans know how to mobilise. Whether for protest or for political rallies. What we lack, nationally, however, is the ability to mobilise resources in a coordinated effort. The moment of political fracturing and economic stagnation in which South Africa finds itself, is one in which the beloved ANC is losing power, one where a rising tide of youth unemployment glows red, in a world where political populism is increasingly fashionable – South Africans will decide whether we succumb to militant black nationalism or whether we build on our non-racial democratic foundations. Unless we have a Marshall Plan to co-ordinate our efforts, the militancy of the strain of nationalism we are breeding will overrun our goodwill and eventually, our thinly spread police service.

The lure of black nationalism lies in the fact that it justifies a racialised form of majoritarianism, which gives a new ruling black elite a veto over all other segments of our society. It does so on the promise of rapid change to the status quo. It represents a future in which our body politic becomes infected with a virus of deceptive national pride, rooted in narrow race-based demands. It represents a political discourse wherein the room for disssent is quashed in favour of a party line, dictated by a demagogue. It is a political mood in which the new Broederbond of “black diamonds”, become the vanguard of a grotesque materialism.

The alternative is the now seemingly pedestrian notion of “non-racial democracy”, which has served most South Africans fairly well since 1994. It is an alternative future in which rational argument, instead of anger and resentment, form the basis of our public discourse. It is a future in which South African citizenship reigns supreme over ethnic, racial or tribal affiliation. It is a future in which our parliament and legislative processes exercise robust oversight over the executive in government, irrespective of the party that has constituted it. It is an alternative which creates the space for concerted efforts towards national reconciliation and development.

At this moment in the political evolution of South Africa, citizens will by their actions choose between these two alternatives. Leaders will by their inaction, permit a choice either way. The divergent implications will be stark and long-term. If colonial oppression lasted centuries, and Afrikaner nationalism lasted more than five decades, given the racial and demographic make-up of our society, were an exploitive black nationalism to take hold, it may never be a uprooted. Our march to such a future would represent a return to a world in which there are first-class citizens, second-class citizens and a whole cascade of diminishing rights for “foreigners”, as a new pecking order is strictly enforced at the public trough.

This second choice, hinges on how we foresee and pursue our economic development as a nation. If we continue to conceptualise the role of the state as the beginning and end of economic progress, placing so-called “transformation” as it’s centrepiece and focus, and seeking to achieve it through the reallocation of old wealth, we would certainly eventually radically alter the racial composition of ownership of our country’s economy. Except, there won’t be much left to own. We will exchange a white elite with a black elite and have lost the country in the process. If the socialisms and post-colonial interventionisms of Ghana, Nigeria, Venezuela and the like is anything to go by, this is an economic future that is stagnant at best and implodes at worst.

The alternative is an economic approach where South Africans choose productivity, spurred on by innovation and investment, as the keystone of a new economic development path. The critics of such an approach, who often enjoy ridiculing the Thabo Mbeki era’s GEAR and ASGISA policy approaches, usually fail to mention the fraught government-business and business-labour relationships that undermined such a policy approach. Nonetheless, it is the alternative to a so-called radical approach and happens to be the golden goose that currently funds our radical social grants programme. Again, this is a choice that citizens will make. Once the ANC has settled on the former radicalism in their policy conference in June, as they are likely to do, citizens will either extend their support for the party or redistribute their vote in search of a better alternative. The inability of radicalism to marshal resources for productive investment is almost certainly to lead to a martial law scenario eventually.

Our final grand national choice will be about what kind of society we form through our day-to-day interaction with one another. One option is to continue to live in the enclaves of our respective cultural and racial histories. The other is to venture out of our comfortable sameness and become natives of the rich and diverse otherness of our many internal communities in South Africa. We are an old country, but a young nation who barely knows one another. Instead, we clump ourselves into in-groups and out-groups based on skin pigment, like infants who fight over their favourite-coloured crayons. We are a long way from recognising the shared humanity in each of us.

As a result, we will either self-select cultural homogeneity in our competitive enclaves or create a new culturally rich tapestry, uniquely South African.

The choice we make between these three alternatives, political, economic and social, will fundamentally shape the world in which our children grow up. If we were to choose the combination of the first options, South Africa will fracture into many countries, held together by detached national power-holders and held apart by a domestic peacekeeping force. Some will live in the country of King Goodwill Zwelitini in KZN where Zulu patronage rules supreme, others in the country of the Gauteng oligarchs who through smoky back-room deals and rich tenders, probably associated with the energy and mineral sectors, make a meteoric rise. Others will settle in the country of the Western Cape where fearful former elites withdraw into a laagar of successionary indifference, while the no-mans lands of Limpopo, the Northwest and the like are crippled spaces, where pillaging fully hollows out our institutional centre. Scattered in among these mini countries, will be the various parochialisms of Afrikaner independence and self-sufficiency. Places where the likes of AfriForum create sub-economies, ecosystems of self preservation that sustain the familiarity of sameness, prizing similitude over largesse.

Should we opt for a combination of the latter alternatives, of non-racialism, productivity and integration, South Africa would rise like a Phoenix and power and develop the entire continent. We have all the resources and know-how to do so. Young black, white, coloured and Indian South Africans would simmer together in one pot of national pride, without losing a sense of diversity and uniqueness in their own right. Such an experiment cannot rely on tolerance alone, but would need to be buoyed by a celebration of diversity and a commitment to fundamental respect for one another.

The choices then of who we vote for, what policy line we pursue, and how we conduct the discourse in the process, is about more than ticking boxes in voting booths between now and 2019. We are choosing our future, and on behalf of our kids, shaping theirs. In my assessment, we are choosing for them between a Marshall Plan and a life of survival under martial law. DM

Photo: Protesters throw rocks and stones at police forces in protest over the lack of land and housing, Finetown, Johannesburg, South Africa, 10 May 2017. EPA/CORNELL TUKIRI

Marius Oosthuizen is a member of faculty at the Gordon Institute of Business Science, South Africa. He teaches leadership, strategy and ethics. He oversees the Future of Business in SA project which uses strategic foresight and scenario planning to explore the future of South Africa.