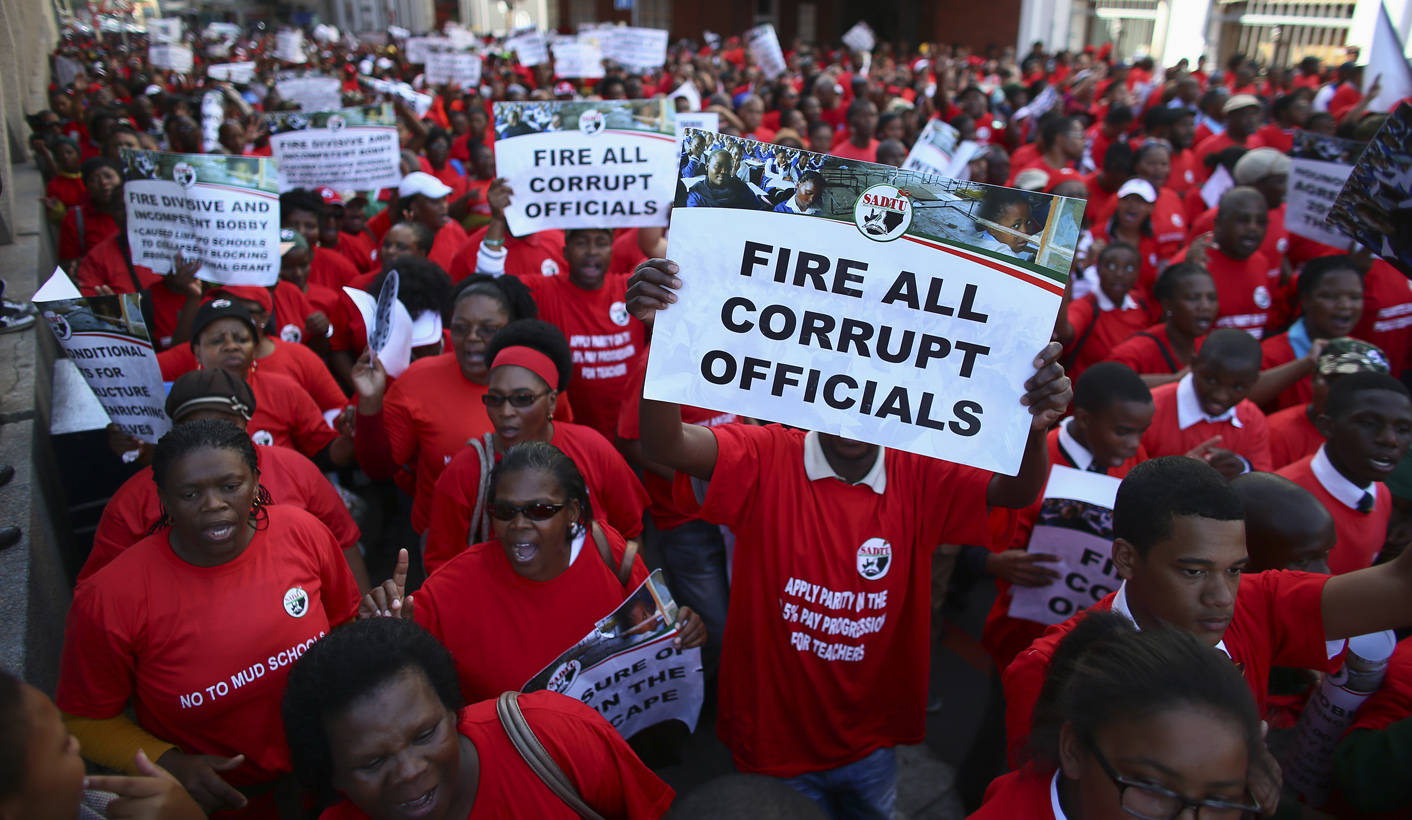 No trade union in the democratic history of South Africa has attracted as much criticism as SADTU, the South African Democratic Teachers Union. In the past, attempts to weaken the union’s powerful hold on the country’s education system have largely come to naught. Over 18 months ago, the Democratic Alliance tried to go another route: asking the South African Human Rights Commission to probe whether SADTU is violating the constitutional rights of learners to a basic education. It’s now been confirmed that the investigation is under way. By REBECCA DAVIS.

Selling teaching positions. Protecting sex-pest teachers. Regularly calling strikes which shut down teaching and learning at schools that can ill afford the lost time. These are just some of the charges routinely laid at the door of the South African Democratic Teachers Union (SADTU), which in the past has seemed to wield an unbreakable influence over the country’s education system.

Now, the DA is hoping that the South African Human Rights Commission (SAHRC) can intervene. The opposition party announced on Thursday that it has been informed that the SAHRC is investigating SADTU, following a complaint laid by the DA in September 2015.

“Children’s rights is one of seven focus areas of the SAHRC,” DA shadow basic education minister Gavin Davis told the Daily Maverick on Thursday. “We therefore expect the SAHRC to conduct a thorough investigation into the myriad ways that SADTU denies children their right to a decent basic education.”

The DA has asked the SAHRC to investigate, in particular, SADTU’s “blocking of measures to hold educators accountable for poor performance’; its “neglect of teaching and learning while engaged in various unlawful protests and strikes”, and its “unlawful interference and corruption in the appointment of teachers and principals”.

Davis also points out that South Africa has more teaching days lost to strike action than any other country in southern Africa.

“It is no wonder that we get a poor return on the huge amount of money we spend on education, to the detriment of children living in the poorest parts of the country,” he says.

The opposition party has been one of SADTU’s most consistent and vocal critics, and there is no love lost between the two bodies. “The DA will never rest until they destroy our organisation,” SADTU media officer Nomusa Cembi told the Daily Maverick.

Leaving political ill will aside, however, is there merit in investigating whether SADTU as an organisation has contributed to denying children their right to education?

“Definitely,” says Dr Nic Spaull, a senior researcher in the economics department at Stellenbosch University who has written extensively on education policy.

“Perhaps the most recent and comprehensive treatment of this topic is the Ministerial Task Team on the jobs-for-cash scandal which was released last year, also called the Volmink Report. That report states emphatically that SADTU has captured the education department in most provinces to the detriment of education.”

The Volmink Report found that “six and possibly more of the nine provinces are where SADTU is in de facto charge of the management, administration and priorities of education there”. The report states that SADTU’s “undue influence” is “endemic to greater and lesser degrees in the entire education system”.

Spaull also believes that it is problematic that most officials in the Department of Basic Education are paid-up member of SADTU – “making it difficult to play the role of referee in union-Department disputes”.

He adds a note of caution, however: “I don’t think that all the failings of the education system can be laid at the feet of SADTU. In many instances, SADTU is stepping into the gap that only exists because the department is not doing its job. The vacuum left by an absent administration is filled by SADTU.”

Education lobby group Equal Education is also wary of putting all the blame for South Africa’s education crisis on SADTU.

“Equal Education regards trade unions as a necessary component of a democracy,” spokesperson Mila Kakaza told the Daily Maverick. “Teachers’ unions, including SADTU, are indispensable to the transformation of South Africa’s education system.” The group warns against “turning valid criticisms of SADTU into reasons for undermining collective bargaining”.

However, Equal Education also notes: “There is systemic rot which SADTU must accept its share of responsibility for.”

SADTU’s power cannot be understated: it boasts more than 260,000 members and a monthly income of R18-million-plus. Within the tripartite alliance, the union wields considerable political clout. As Sipho Masondo pointed out in City Press last year: “It is the only affiliate of labour federation Cosatu to be found in every corner of the country and in every ANC branch. This gives the ANC a powerful and well-organised campaign resource during elections. It is for this reason that the ANC will have no incentive to mess with SADTU.”

If SADTU is to meet its Waterloo, it is unlikely to be at the hands of the SAHRC. The Chapter 9 institution is vested with the powers to “take steps and secure appropriate redress where human rights have been violated”, but in practice is widely perceived as toothless. It failed to respond to queries about the investigation from the Daily Maverick on Thursday.

Davis says that he does not want to prescribe any particular sanctions to the SAHRC, since the investigation is still under way. “However, we hope that the SAHRC will recommend ways to balance the rights of educators to unionise and the rights of children to a quality basic education,” he says.

For its part, SADTU says it knows precisely nothing about the investigation.

“SADTU has not received any letter from the Human Rights Commission notifying us that we are being investigated,” SADTU media officer Nomusa Cembi told the Daily Maverick. She says that the union learnt that the DA had laid a complaint against them with the SAHRC in 2015 through media reports.

“We then wrote to the commission to ask if they had indeed received the complaint and if so [if they would] provide us with a copy and advise us on the steps they were going to take in handling the complaint. The commission, up to this day, never responded to us.”

But SADTU will cooperate with any legal process – “even it is brought against us by our class enemies”, Cembi says.

“SADTU remains a staunch supporter of quality public education for all our children, while protecting the rights of teachers as workers as per the same Constitution.” DM