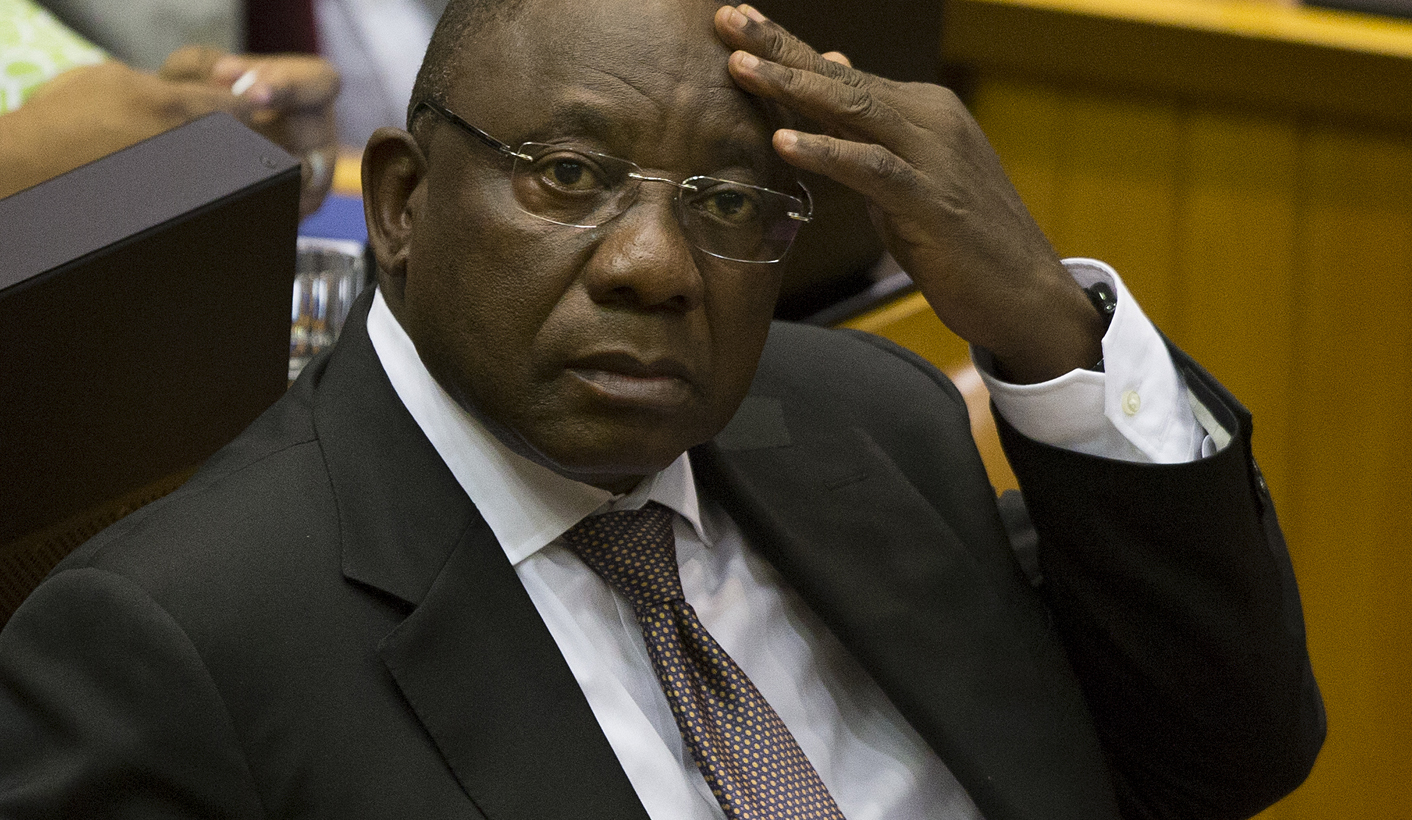 Light-hearted moments are rare in the rough-and-tumble politicking and politics of the House. But chuckles erupted across parliamentary benches when National Assembly Speaker Baleka Mbete opened Thursday’s question time for Deputy President Cyril Ramaphosa with, “The Honourable, the president… Deputy president”. DA Chief Whip John Steenhuisen shot to his feet: “May I address you in terms of Rule 63, the rule of anticipation?” With the ANC elective conference some months away, once giggles subsided it was down to swatting away politically loaded questions in this, an ANC elective conference year. By MARIANNE MERTEN.

Deputy President Cyril Ramaphosa maintained a poker face when the prickly issue of the motion of no confidence in President Jacob Zuma, and MPs voting with their conscience, came up.

Next Monday the Constitutional Court hears arguments on a secret ballot for this motion, which was postponed in Parliament pending judgment. The court action was initiated by the United Democratic Movement (UDM) after the ANC national working committee last month closed ranks around Zuma and his decision to sack Pravin Gordhan and Mcebisi Jonas from the finance ministry. Opposition parties need around 70 ANC MPs to break the party line and vote with them to obtain the 201-vote threshold for the no confidence motion to succeed.

“We have a party system and the party system dictates we should exercise our responsibility in a particular way,” he said. “Let us leave the issue that is on the table, the vote of no confidence, and not try and make it toxic by talking about the electoral system in a wishy-washy way…”

It was DA leader Mmusi Maimane’s question on electoral reform to introduce constituency votes for accountability of elected public representatives that opened the door.

The deputy president argued that no one should be “beguiled” – a constituency system was the only way to have accountability. “With a matter like this, it’s quite easy to play to the gallery… We are all here on the basis of political party mandates. Some parties even have in their constitutions that you may not violate your party position and I think the DA has such a provision…”

During question time in the House, points of order from the ANC benches come in handy, as do rulings by Mbete,who is also ANC national chairperson, giving a speaker from the executive the choice whether to forgo or to entertain responding.

And so unanswered went Cope’s question on the role of the so-called intelligence report in President Jacob Zuma’s midnight Cabinet reshuffle. Said Ramaphosa: “I always try not to seem like I’m avoiding answering questions. This question is already a matter of legal processes and I would like not to answer this question at this stage…”

A DA question on the protection detail for former African Union Chairperson Nkosazana Dlamini-Zuma was sidestepped by referring it to “the appropriate structures”.

Ramaphosa gave more time to an EFF question on his recent apology over the August 2012 Marikana killings, when police killed 34 miners after 10 people died in the preceding week.

“I apologised for the language that I used. I did use inappropriate or unfortunate language in the e-mails (to various ministers). The intervention I was trying to make was to prevent further killings… It could never be that I would want to have mineworkers killed or anyone for that matter,” the deputy president said to applause from ANC benches.

He was prepared to go to Marikana, as Winnie Madikizela-Mandela had counselled, and also to take up Eastern Cape pastors’ offer to accompany him to visit the widows. It was a case of setting a date, Ramaphosa said: “As a leader I am prepared to be accountable…”

The deputy president’s performance focused on talking up government, encouraging broader discussions, but also taking stabs, particularly at the DA. Question time in the House is a political platform for those knowing how to take advantage.

“We have made progress whether people like it or not,” said Ramaphosa, adding that the task was now to fill up the half-full glass for a more prosperous South Africa. But rattling off statistics like the employment of eight million more South Africans today compared to 1994 conveniently obscures that the country’s population has grown by almost 17-million from just over 38.2-million then to 55-million today. It takes a quick opposition MP to make mileage out of that. None did on Thursday.

On Wednesday Malusi Gigaba’s maiden appearance as finance minister started off with a microphone failure – and ended in a rules-justified failure to answer a question on his adviser Professor Chris Malikane, dubbed “mad Malikane” by DA MP David Maynier.

As tempers again rose across the parliamentary benches, it seemed Energy Minister Mmamoloko Kubayi temporarily slipped back into her former life as MP and deputy chief whip. The Honourable Maynier could not describe the adviser as mad, she said: “It’s wrong. It’s just morally wrong. It’s bankrupt. He’s not here to defend himself.”

Gigaba maintained that that question actually was further down the question paper, and he would answer it when it came up officially at that stage. Of course, it may be weeks, or months, before this may happen. Steenhuisen took exception to the minister’s attitude – and that presiding officer House Chairperson Thoko Didiza’s support of Gigaba effectively protected the minister. “It’s like we (MPs) are accountable to the executive!” he said, but Didiza rejected the claim: “He (Gigaba) said he’ll answer the question when it arises. Let’s proceed.”

Then, asked about the selfies posted by his wife, Norma Gigaba, while attending the International Monetary Fund/World Bank spring meeting, the finance minister simply said: “My wife did not attend any meeting anywhere” – and remained silent on EFF MP Hlengiwe Maxon’s follow-up question on the “wisdom” of taking one’s spouse along.

Again Didiza stepped in, to “help as he has answered”, pointing to the ministerial handbook with regards to spouses coming along on overseas travels.

That handbook – the 2007 version is the latest publicly available copy as revisions started years ago are yet to be finalised – allows for first class travel for both the member of the executive and spouse, and that costs are paid for by the relevant department. If children go along, their parents carry the costs.

Ministerial overseas travel must, according to the handbook, be authorised by the president, who must be approached in writing two weeks ahead of time. “International visits should offer real value and benefit to the Republic of South Africa”, it says, adding that members of the executive should “apply their minds cautiously in determining the number of officials, and the feasibility of their spouses accompanying them abroad”.

Gigaba’s comments on both adviser and wife before the finance committee a day earlier were more expansive, saying it was a cheap shot to involve his wife and that while his adviser has his opinions, it was only the minister’s views that counted.

But then again, question time in the House, as again highlighted during Ramaphosa’s slot on Thursday, is more often than not like following a trail of crumbs for opposition parties. As the verbal sparring unfolded across the House, former ministers Gordhan and Derek Hanekom got used to their new seats on the ANC backbenches.

On Thursday, in the wake of long-standing opposition complaints that ministers and their deputies failed to answer questions, Ramaphosa maintained that all Cabinet members accounted to the House. “The executive remains committed to account to this House, this is what I can say without equivocations,” said the deputy president who as leader of government business is the link between the executive and national legislature. “We have a legitimate Parliament that is accountable to our people.”

Perhaps more so than many of his Cabinet colleagues, Ramaphosa is comfortable with the politicking and awkward questions in the national legislature, and moving to own these. Even if South Africa had an electoral system in which voters cast their ballots for a political party, Parliament funds MPs’ constituency offices, he said. “We must remain connected to our people so there is no social or political distance with our people. If we don’t, our people will in five years’ time declare their views.” DM