Burundi’s messenger of love and peace gets top honour 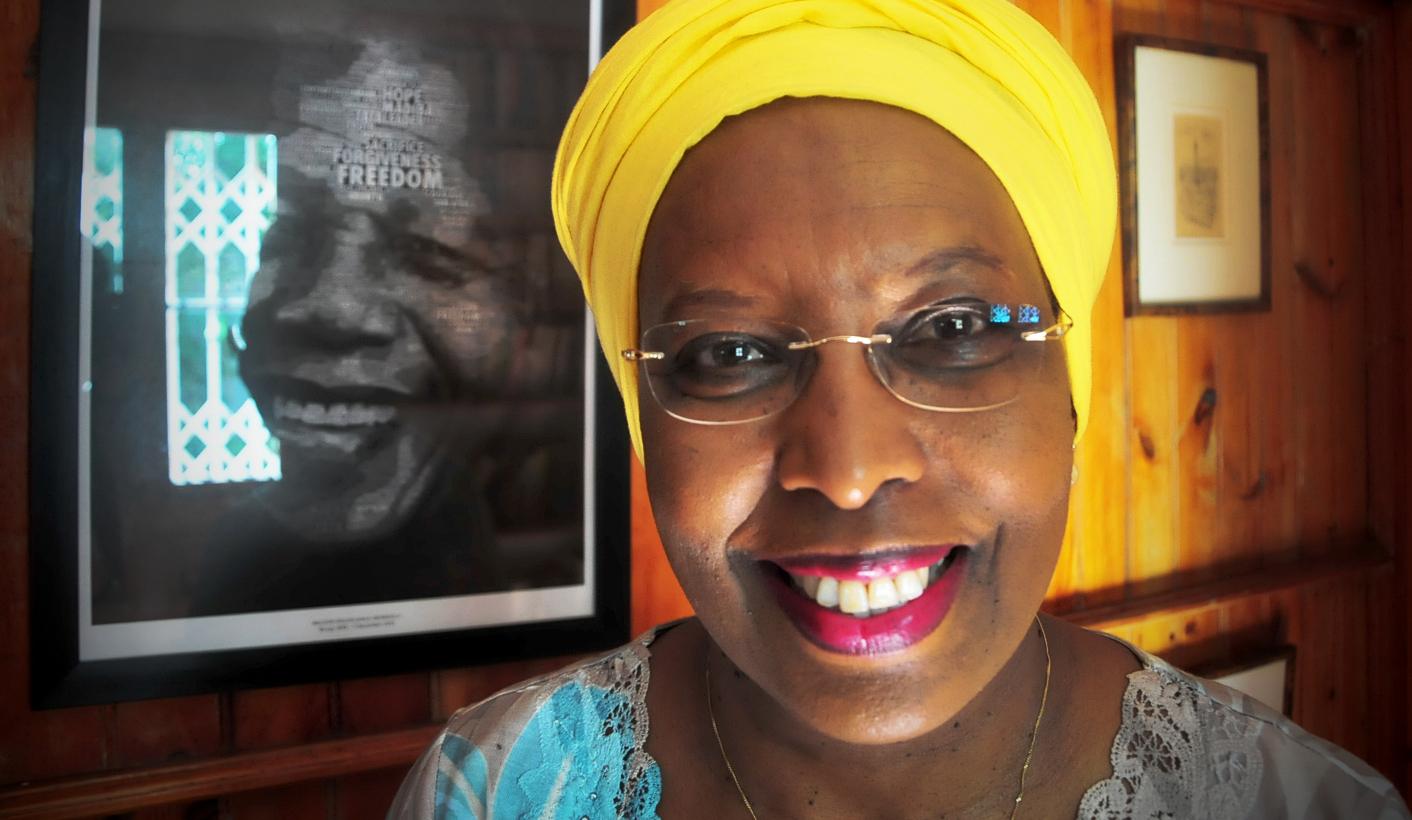 When she adopted a Hutu orphan many thought Tutsi Marguerite Barankitse was playing a dangerous game. In a country ravaged by ethnic violence that continues to claim hundreds of thousands of lives she has proven that love conquers all prejudice, writes LUCAS LEDWABA.

MARGUERITE Barankitse doesn’t look like an exile who is on the death list of a despot who has plunged his country into turmoil in pursuit of an extended presidential term.

She is relaxed, jovial and doesn’t walk around with armed security men as one would expect of someone whose life is in danger.

She lives for prayer, peace, unity, justice, progress and development. And if she is to meet her maker through a bullet past her head, then so be it.

Recently, in a hall of the 1812 Settler’s Monument at Rhodes University in Grahamstown, guests and graduates stood up to observe a moment of silence at Barankitse’s request.

The institution has bestowed upon her the title of Honorary Doctorate of Law. Through her organisation, Maison Shalom (Oasis of Peace), which she started in 1993 she has achieved what could shame many governments.

Through soliciting donations, sheer will power and a purpose to build and mend the broken, she has managed to among others, build a hospital, establish a micro credit bank to cater for rural women in co-operatives, started self-help projects and vocational schools for refugee children.

Her work has touched the lives of more than 30,000 children from all tribes and countries, and earned her international acclaim and respect which include several honorary doctorates and more than a dozen awards by respected international universities and organisations.

“The main objective of Maison Shalom was not to welcome orphans, but to create the conditions to gather children who otherwise would grow up hating each other, who would grow up with prejudices,” Barankitse said in her acceptance speech at Rhodes.

In a quaint garden at a modest bed and breakfast establishment in Grahamstown on the morning before she was to formally accept the honour, she told me: “These children were fragile and hurt by civil wars and ethnic conflicts. It was to crush these borders of hate built by men. To give them the key to love and to compassion.”

In fact, that very morning she had enquired from staff at the B&B whether she could find a chapel or Catholic church nearby where she could say her prayers.

Although she had been a community builder of sorts since her teens, Barankitse recalls a particularly life changing moment in Burundi in 2001.

In one night, 16 newborn motherless babies were dropped off on her doorstep. Their mothers had all reportedly died or were dying somewhere in the remote villages of Burundi.

“Sixteen! Siiix–teeeeen!” she says repeatedly in bewilderment, as if the newly born are still lying around somewhere nearby requiring tender love and care.

Her country Burundi was in the grip of yet another bloody ethnic civil war between Hutus and Tutsis. According to Genocide Watch, the country had been gripped by sporadic bursts of ethnic killings between Hutu and Tutsi since its independence from Belgium in 1962.

An estimated 500,000 people were violently killed in the outbreaks of violence in 1972, 1988 and 2000. Although an uneasy calm returned to Burundi after the signing of the Arusha Agreement pioneered by president Nelson Mandela in 2000, violence nevertheless continued until the mid-to late 2000s when the country held its first democratic elections in many years.

But now Burundi finds itself on the verge of another episode of ethnic mass killings after President Pierre Nkurunziza unilaterally amended the constitution to make provision for a third presidential term in 2015, battered the opposition and declared himself winner in an election marred by violence and the deaths of hundreds of citizens.

Outspoken critics like Barankitse and more than 500,000 Burundians have been internally displaced or fled the country, fearing for their lives from Nkurunziza’s militia, Imbonerakure.

In 2001, Burundi was still technically at war. The public health system like other state functions, including law and order had broken down to almost dysfunctional.

And so that night after more than a dozen babies were dropped on her doorstep, Barankitse waited for dawn and packed the newborns into an ambulance. She drove to the offices of the minister of health.

“I showed him. I said, look, huh, in one day, 16 mothers died. I can’t accept that. I said I want to build a hospital. And he looked at me and said, ‘are you crazy’?” she pauses, re-enacting the minister’s facial expression of scepticism and sarcasm.

A few weeks later she had convinced her brothers to donate their ancestral land for the planned hospital. She then contacted an architect in France to help design a hospital.

After months of planning, pleading and soliciting donations, construction work on the hospital and over a year later, the cries of newborn babies could now be heard in maternity wards equipped with state of the art infrastructure.

No more would pregnant mothers die unnecessarily in labour in the bushes of the war-torn country, thanks to Barankitse’s unwavering efforts and spirit.

She is a great admirer of former president Nelson Mandela, and feels inspired by his stance on reconciliation and forgiveness. Even though she has lost more than 60 members of her family in ethnic violence, Barankitse believes the only way to conquer hate and prejudice is by spreading love.

In a different time, her selfless work was even honoured by Nkurunziza, who twice bestowed upon her the title Mother of the Nation. But now, she is on the run from the man who is forcing his will upon the Burundian people, slaying and imprisoning those who dare raise their voices against his lust for power.

“Because I love him (Nkurunziza), I can’t keep silent. Like Archbishop (Desmond) Tutu said, if you don’t speak out (against injustice), you are also on the side of the oppressor,” she says about her criticism for Nkurunziza.

In 2015, when violence sparked by Nkurunziza’s announcement of plans to amend the constitution escalated, she sought an audience with him.

“I defend the rights of the children. They killed a 15-year-old boy. I went to advise them and protest to say, you can’t kill children,” she says.

That marked the beginning of the end for her projects and her stay in the land of her birth. She learnt of an attempt to kill her shortly afterwards and sought refuge in the home of an ambassador.

When a warrant for her arrest was issued, she fled the country with only her handbag. In turn, the government shut down all her projects, including the hospital where the militia cut off the electricity, leading to the deaths of 20 premature babies in their incubators.

“If you open your mouth, you are killed. If you are inside the country, you can be killed, raped or you disappear,” says Barankitse who is now exiled in neighbouring Rwanda.

Barankitse fears for the worst. She warns that Burundi is on the brink of genocide on a similar scale as that seen in Rwanda is 1994. She is also worried about the estimated 500,000 Burundian refugees scattered around neighbouring countries. She is even more fearful that those trying to flee now are raped, castrated and killed by Imbonerakure.

The UNIIB pointed a finger at Imbonerakure, which is styled along the same lines as the Interahamwe which was behind the mass killings in Rwanda in 1994.

Barankitse warns that to avoid a repetition of Rwanda and Burundi, Africa needs a new breed of leader who should understand that “leaders should serve, and not be served”.

“Leadership means to serve your population, to see if every citizen has dignity. This is very important. We need leaders who have compassion, tolerance, integrity and who are not corrupt.”

After fleeing to Luxembourg in Europe, Barankitse decided to return closer to home in Rwanda where she is continuing with her developmental projects in education, social upliftment and empowerment of displaced refugee children.

“We try to restore life, to heal the memories of those young people who were castrated, those young women who were raped. We are builders of hope,” she says about Maison Shalom.

Although she knows she is a marked person, she has no fear, she says.

“I prefer to die trying to distribute love and happiness than to be there hiding under the bed. Of course, I don’t want to be a martyr. But I will never hide because I think Nkurunziza will send me militia,” says Barankitse.

“This vocation,” she pauses. “I got it from God. If really God wants to call me, and say now Maggie, come your mission is finished, then I will go.” DM

Lucas Ledwaba is a media practitioner with Mukurukuru Media